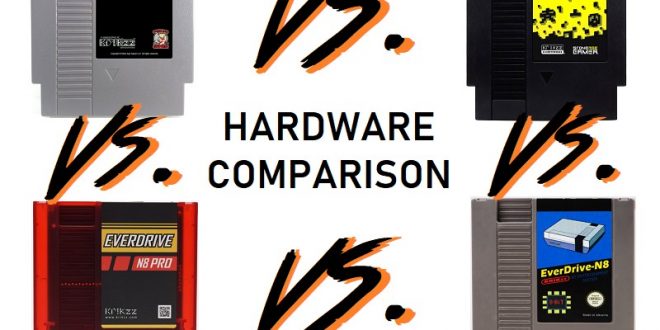 If you’re just joining us, you’ll know that we already have a review of the standard model of Everdrive N8. You can find that article by clicking here. But that was years ago and now we’re in 2021. After a weekend of playing with it, I wondered, is this still a good option for people? Should a person buy this model of Everdrive N8? Does its feature set hold up to higher standards of newer Everdrives from Krikzz? Should you hold off and get a pricier model of N8 Pro? Well, I’ll discuss the differences and more, right now!

What is an Everdrive?

“Ever dream of having your whole library of games in a single cartridge? The EverDrive allows you to load your game back-ups (commonly known as ROMs) on an SD card, put the SD card into the EverDrive, put the EverDrive into the system, and have your list of games at your fingertips.”

What is an Everdrive N8?

The N8 base model of Everdrive does the above-mentioned tasks. But on what hardware?

I have the base model that uses the 1.4N PCB. These are the features if you were to buy one of them right now.

*Famicom version of cart requires Famicom to NES adapter to be used with NES. NES version of cart requires NES to Famicom adapter to be used with Famicom.
** Only Famicom can output expansion sound without modification. NES systems require modification to support this feature.
*** FDS is the only exception, user should push the reset button on system to get back to main menu before than shutting down the system, otherwise FDS save data will be lost.

Feature Set of the N8 Pro?

While the N8 Pro features “fast loading” of ROMs, I really didn’t find that the standard N8 took very long at all. I tested out several games on the N8 base model and found that they loaded within seconds. I don’t know how fast exactly it loads on the Pro, maybe instantly, but if you’re okay waiting like 3 seconds for a game to load. So if you’re only wanting the N8 Pro because it’s loads games faster, then you probably should save your money and get the standard N8.

The N8 Pro also comes complete with a development USB port. You can additionally update the firmware of it without taking out the SD card. These features are clearly not for the average person who simply wants to play games. So if you’re thinking you want to test stuff out of your own creation or don’t want to be bothered removing the SD card once in a blue moon, you could buy the Pro. But these features I’ve talked about so far are not where the Pro really shines for users.

The Pro’s true features are in its build quality, the fact that it supports way more games, has drastically improved audio, FDS swap button, increased battery life, and way more save slots for games. These are the true core reasons as to why you would want to update or hold out for an N8 Pro. Having said that, if you only need a couple of save states for a game, don’t play FDS ROMs, and are okay with a slightly “noisier” audio output, the Base model N8 is a totally viable option. It exists for a reason, for those who remember playing throwback NES games as a kid and they want the modern luxury of playing those nostalgic games from a single cartridge. The Base model N8 on average is $50 less, it’s not trash and shouldn’t be overlooked so quickly.

Should you upgrade? That’s a harder question to answer. If you had just bought the Base model, you probably already checked the differences and made a choice you’re comfortable with. However, if you’ve had it for a year or more and found things you don’t like in it, the N8 Pro presumably is going to be chock full of resolutions for you.

If you’re upgrading and money is the concern, StoneAgeGamer has a Everdrive trade in credit program. You could use to get you some money towards paying for the Pro if you want to buy from them. It’s not near enough to make it to the finish line of the Pro, obviously. If you’d rather get more money, you could go the route of selling it with an SD card (with no ROMs) and that would probably get you so much closer. You could probably sell it for 75% of what you purchased it for and if you’re like me, you’d wait until your new one arrived so you can have the replacement in hand. But if you’re hurting for cash and don’t mind the wait, you could sell it first.

If you need a further breakdown of the difference between the two, here is a comparison list, drafted by StoneAgeGamer.