The Retrotink 5x pro has just landed and I couldn’t be more excited to give it a shot with some of my favorite consoles of all time- the PlayStation 2, Sega Saturn, and the Nintendo 64. If you haven’t heard of the Retrotink 5x pro, it’s a high-resolution video digitizer that can make your old game consoles look good on any modern-day TV/Display with fantastic results. Back in August 2020, I dropped another review on the Retrotink 2x pro which you can check out here. 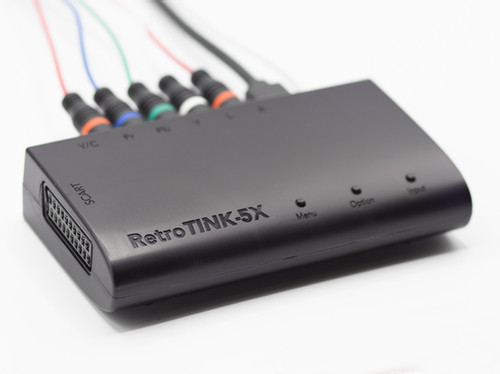 With the success of the Retrotink 2x Pro and Retrotink multiformat, the creator Mike Chi felt that there was more to be achieved with the Retrotink line. So After months of speculation and rumors, Mike Chi went back into the lab and revealed the Retrotink 5x pro!! Boasting features such as output up to 1440p (depends on TVs), 240p downscaling, automatic standard 1080p upscaled, drop-free signals when switching resolutions from 240p/480i titles, five deinterlacing modes, optimal sampling modes for various game consoles.

It’s the first custom-developed FGPA-based Motion Adaptive Deinterlacing algorithm specifically for games to make 480i titles shine without adding lag or flicker! I’ve been using the motion-adaptive feature a lot lately and it is very impressive indeed! The motion adaptive main job is to reduce flicker and to give the game a much smoother graphical experience, this feature specifically was built around the PS2 and eliminates 90% of the flickering which is infamous on the PS1 and PS2!! Now that is truly impressive and is the only device at the moment to adopt this feature. 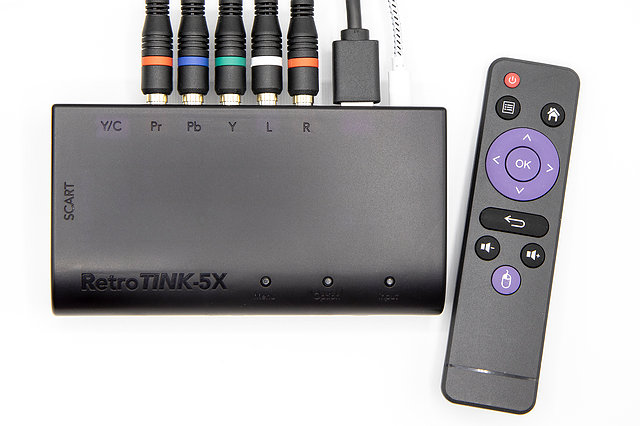 Let’s take a deeper look at the features shall we:

The full specifications include:

*720p and 1080i inputs are chroma limited. All other input resolutions preserve the full original chroma bandwidth. 1080i inputs use ‘Bob’ deinterlacing, 480i/576i inputs can utilize all deinterlacer modes. Not all TVs/displays will be compatible with 1440p. The RetroTINK-5X Pro uses 1920 x 1440p CVT reduced blanking timings. 1440p mode is only available for 240p/480i/480p sources.

With all these features I just had to get one, I ordered one and received it in the mail two weeks later. Included in the package was a remote, which can be used to change modes and can also be used to shut it down, plus a Scart Adapter, and a micro mini USB plug. 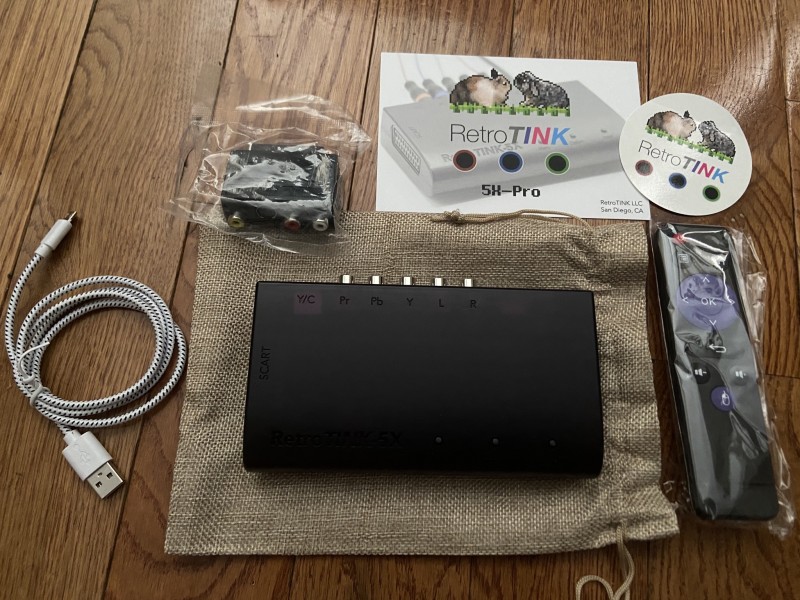 So what was the first console I tried out?  Well, the best-selling console of all time of course- the PlayStation 2 !! This was a no-brainer considering the PS2 has a vast impressive library of titles and I was looking forward to seeing how well they would look on my UHD 75 inch LG TV.  For the Retrotink 5x they recommend good quality component cables, you can get PS2 Retrovision cables and other component cables from Castlemania games ( I will provide a link to their component page at the bottom of this article) which are very close if not better than the original PS2 component cables made by Sony.

The first game I tried out was Resident Evil Code: Veronica. The game looked so sharp, I thought that I was playing a PS2 remaster or a PS2 game on a Backwards compatible PS3 console!! Retro devices like the OSSC and the previous upscale king the Framemeister had trouble making the PS2 look good but the Retro tink 5x nailed it!  It really looks that good!! If you were searching for a backward-compatible Ps3, I would say to you invest in a Retrotink 5x and an original Ps2! The images that are posted were taken from my cell, I’m sorry I do not have an Elgato to capture the images but I did my best to show the quality of this impressive device.

Note: Due to an early model of my TV I was only able to output up to 1200p! Other users may have different experiences.

Next up is the Sega Saturn, now I got to admit I wasn’t too impressed with the linear option On the retrotink 5x which I said makes the Sega Saturn games look very good by smoothing out those rough edges when I reviewed the Retrotink 2x pro months back. But other than that it handles the Sega Saturn very well, there is also a filter option as well and the best feature I tried for the Saturn was 240 downscaled, which made the graphics much sharper and vibrant.

Another one I tested was the Nintendo 64, now I wasn’t able to get good quality out of my cables and that was my fault considering that composites do not look good on modern television sets, but others posted results of the RGB mod working with the Retrotink 5x and the reviews have been nothing but phenomenal!

Now I was able to try the Ps1 but via Ps2, I was really impressed with how the game looks, and since I was able to use my PS2 Hd retrovision component cables on the Ps2 while emulating the Ps1 I was very happy with the results.

Overall I was very impressed with the Retrotink 5x, a truly excellent device! Now I did notice that when you go up to 1200p the graphics get a little lighter but it doesn’t take away the overall quality, I played around with different outputs so whatever looked good I stayed with depending on the game at that moment. So higher and lower outputs may give different results. Also, Mike included three different 1080 modes! Yes, three! Which may help with cropping issues of certain titles on TV sets.

The most impressive feature that is really is going to push Console scalers forward is the motion-adaptive feature which makes the PS2 look absolutely marvelous in 2021 on original hardware, looks so pleasing to the eye that I strongly recommend the original PS2 with the Retrotink 5x over Backwards compatible PS3 any day! Component cables are the best thing to go with for your setup for your consoles and I strongly advise you to stay away from composites if you can. The device is currently sold out and will restock in June/July and will go for $300 due to the rising cost of parts and chips.

Make sure to follow Mike Chi on Twitter for updates and restock info. Mike will also be shooting out Firmware updates for the Retrotink with new features as time goes on so keep a lookout!

You can buy the Retro tink 5x pro: Here