The Isle of Seiren is one of legend and mystery. Rumor has it The Isle is cursed in more ways than one.  During one fateful night Adol Christin, a man who lives for adventuring, was onboard “The Lombardia” as a sailor. After hearing about the legend of the Isle of Seiren, events occur which wind up having “The Lombardia” being attacked, destroyed, and all the passengers lost. Waking up on a mysterious Isle, Adol Christin begins a new adventure. What awaits him on this mysterious island? Find out in our review of YS VIII: Lacrimosa of Dana. 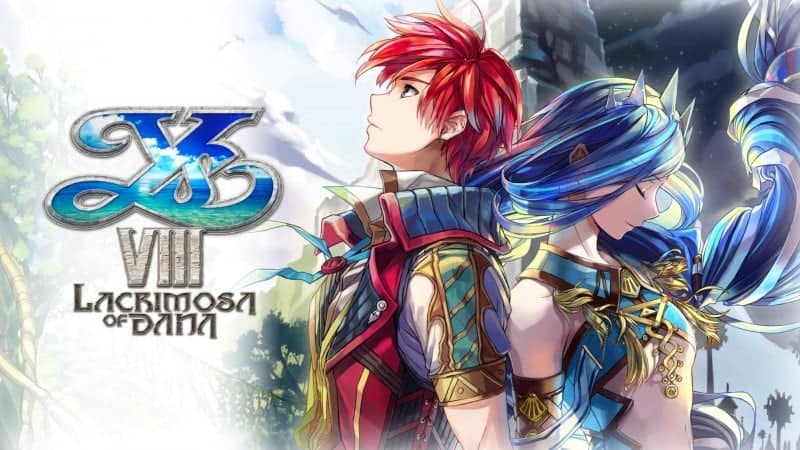 *Thank you to NIS America for providing a PS4 Review code* 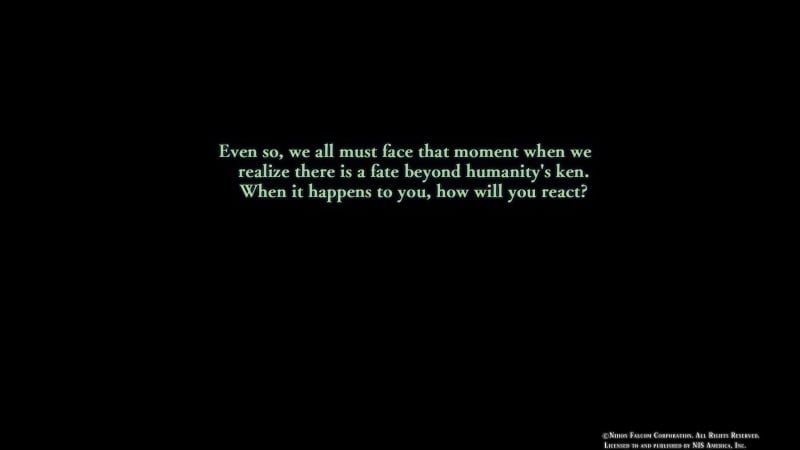 Do you know the name Adol Christin?

An extraordinary “Adventurer” Adol Christin devoted his life to going on adventures and produced over a hundred adventure logs.

This particular story is adapted from Adol’s adventure log titled “Periplus of the Gaete Sea.”

The Isle of Seiren

Located in the Gaete Sea south of Greek along an archipelago, this island was the target of rumors that stated any ships that pass by will sink under mysterious circumstances.

Adol boarded a passenger liner traveling from Xandria to Eresia, only for it to be attacked by a giant sea creature. As the ship was dragged to the ocean floor, Adol and the other passengers were tossed into the sea.

He awoke on the dazzling sandy beach of a mysterious shore. As adol gazed out to sea, he came to a realization…

The island that he found himself on was indeed the “eternally cursed” Isle of Seiren.

In order to rescue the others who were tossed out to sea and to protect themselves from the life-threatening ancient species, adol and his fellow castaways built “Castaway Village.”

It was not long before Adol was visited by cryptic dreams about a mystical girl with flowing blue hair and the unfamiliar world in which she lives.

Why is the island said to be “eternally cursed”? What great mystery is hidden on the island?

And who is this girl who appeared in Adol’s dream?

It is on this deserted island of legend, surrounded by the crashing waves, where Adol’s next adventure starts!

Each Ys game has its own unique story to it. For a man that has “over 100 adventure logs,” each adventure is fantastic. Lacrimosa of Dana is no exception to this. From the start, the game sets the foundation of a grand adventure about to unfold. After the start, the adventure unfolds into a wonderful story that encompasses discovery, mystery, action, and drama. While the Ys games are known for their great story telling and great gameplay, I personally believe this is the greatest storytelling and gameplay yet. Want to know why? Keep reading on. 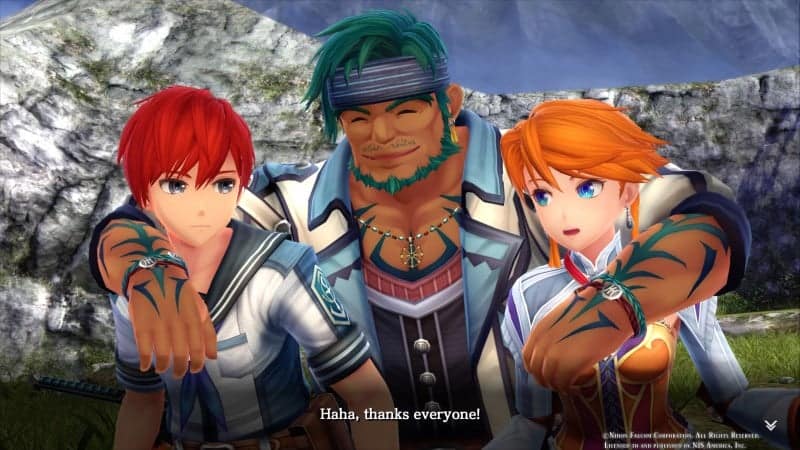 One can argue the story can get a bit confusing, stretch out for too long, or makes no sense. Personally, the story flows very well and is told in a manner that the developers can only do best. There are journal logs, and other logs to help clarify things if the player somehow misses something or is confused. It is also a good reference to review what is told about the story and characters encountered.

Intro/Story score: 4/5 – From beginning to end, Lacrimosa of Dana will have you interested and engaged in the story. In order to fully understand the story, the player needs to make sure they are focused as they are playing the game. Otherwise, they are stuck reading journals and logs. 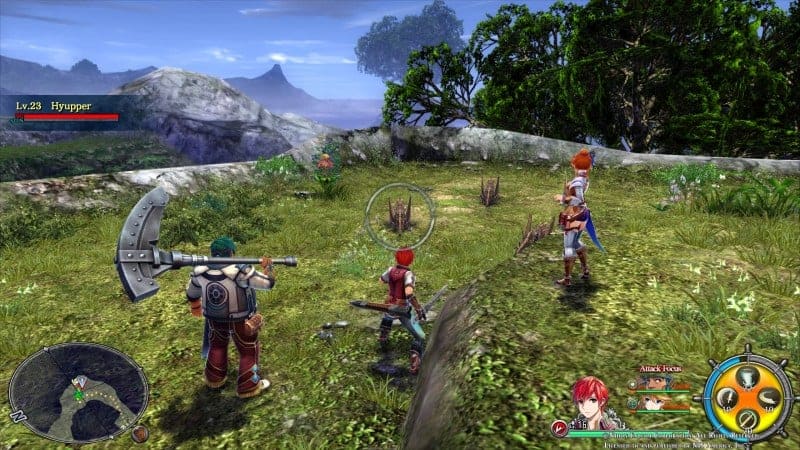 If you played a Ys game before, the gameplay is more or less the same with new features. If this is your first Ys game, the gameplay is pretty straightforward and simple. In combat, you have lock-on, run, jump, attack, skill, and extra skill. There are some pretty overpowered skill moves, and it takes a bit of time to fill your extra skill move’s usage bar. Your skills can level up the more experience obtained.

Outside of combat, you explore the Isle of Seiren to find other survivors and unlock its mysteries. Within the exploration, you find roadblocks that are only possible to bypass if you have enough survivors to overcome it. It is imperative to find the survivors to fully explore the island. There are extra perks to exploring the island and unlocking the mysteries. I will leave that up to the player to discover without spoiling it here. 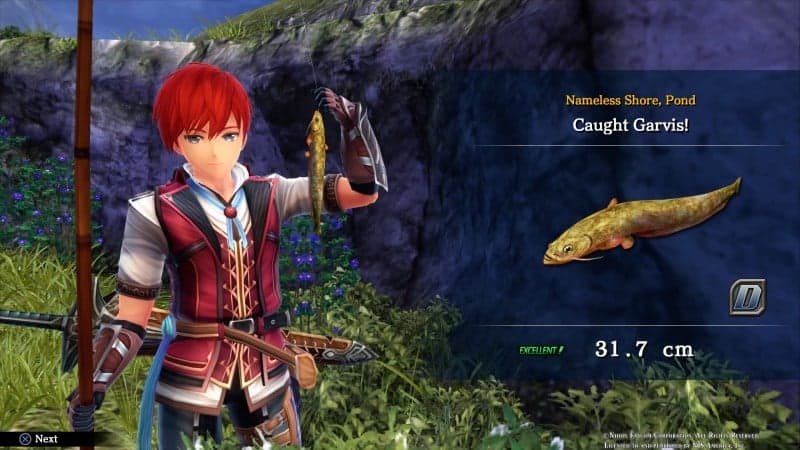 Some of the new features include a new playable character. She is by the name of Dana and considered the second main protagonist of Ys: Lacrimosa of Dana. This was touted during the announcement trailer and other trailers. Her story is a unique one that becomes unlockable later on in the story progression. Once it is unlocked you are free to travel back and forth between both stories. It makes for good storytelling as both stories are intertwined with each other.

Another new feature is to change characters within your part of three on the fly. With pressing the square button in and out of combat you are free to choose whichever character you want to play as. While the story of YS VIII: Lacrimosa of Dana revolves around Adol and Dana, it is different in a way as well. Adol is the main star of the story telling on his side, but the other survivors who eventually become part of your main party play that role as well to a degree. Perhaps that is the reason why changing on the fly works well. 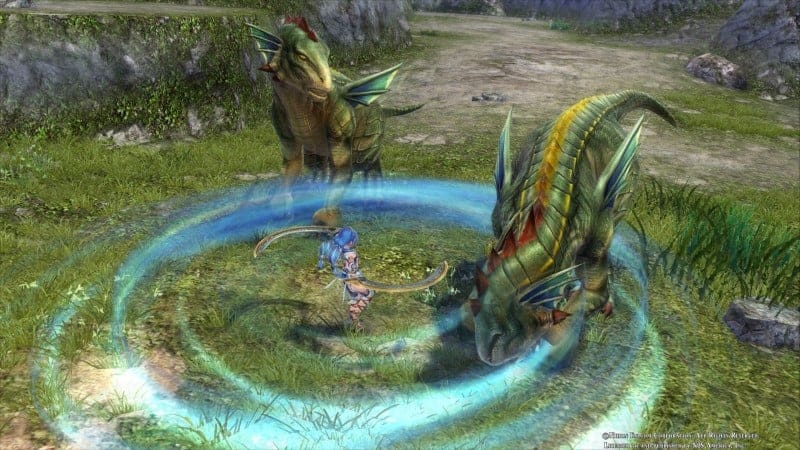 I personally have no negative points to mention about the gameplay. As the saying goes “if it isn’t broken, no need to fix it”. That is completely how I feel here. There was no real difficulty curve in the game either. It progresses just right in terms of the story. There are areas where monsters are overpowered. However, this falls in line with the progression of the game. You are free to explore where you please, but most of the difficulty spikes are resolved if you progress to that point in the game that helps you solve it. It is the game’s way of telling the player “hey you are free to explore, just be aware you will get hurt if you didn’t get to the proper story spot.” The gameplay in Ys games has always been solid. They just a solid gameplay format and improved it. It definitely shows how far the game’s evolution has come in terms of gameplay. 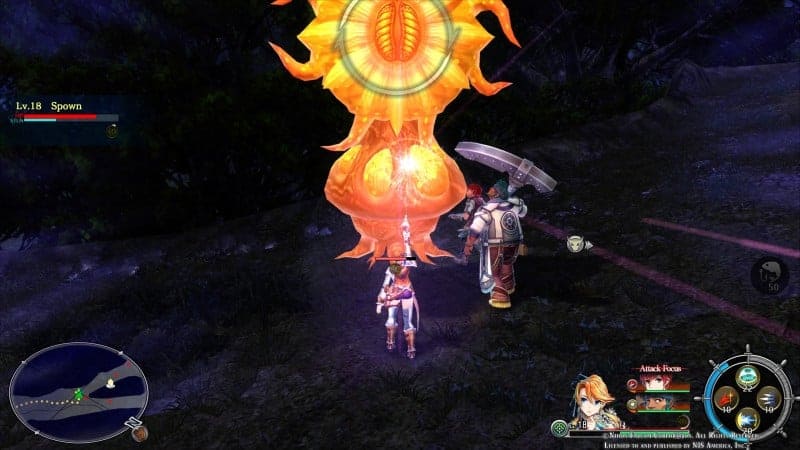 I can see how other gamers explore spots in the game where they haven’t progressed in the game’s story getting frustrated of the strong enemies. You are free to do as you desire in Lacrimosa of Dana, but just be aware of the consequences that may take place. I learned the hard way a few times.

Gameplay score: 4/5 – Ys: Lacrimosa of Dana shows how the evolution of the Ys gameplay has progressed. It is a delight to play the game and experience it. Just be ready for difficult enemies if you are not ready for what lies ahead in terms of story and exploration. 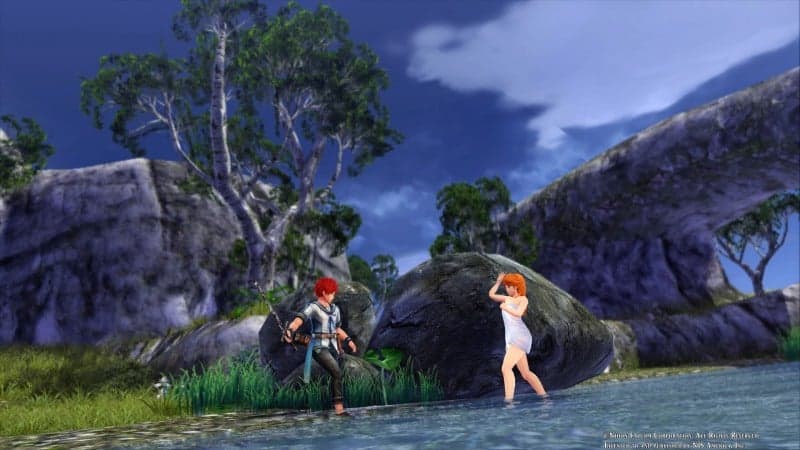 The game looks good on the PlayStation 4. I have not had a chance to check out the Vita version yet. However, in certain spots of the game, the game visuals will drop to a degree which will also cause the framerate to lower itself as well. If there is a day one patch to this game, I played the game without it. Possibly before release, this will be patched.

When I get a chance to play the Vita version, I will update this section with Vita visuals. For now, The score is only based on the PS4 version. 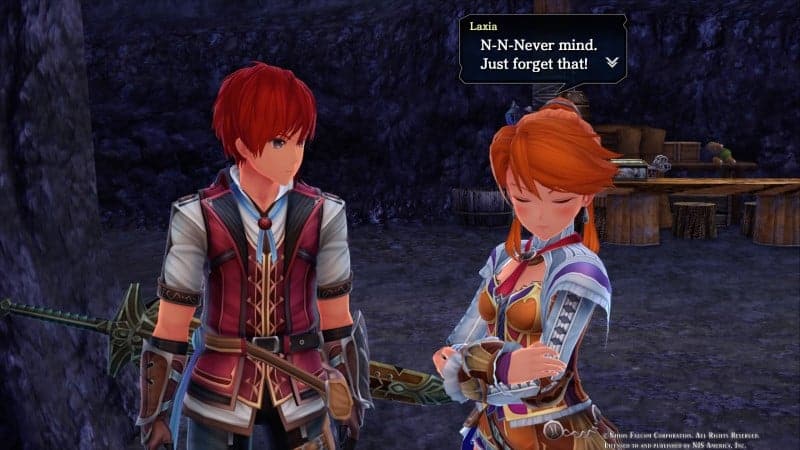 Visual score: 3.5/5 – Lacrimosa of Dana looks good compared to other ps4 games, and Ys games. However, certain spots of the game have the visuals dropping which affect even the framerate of the game. This will hopefully be patched out by day one.

In terms of the Audio of the game, it sounds fantastic. As previous reviews, the first thing I look for is how the game sounds. I am glad to report that the game has a very good soundtrack. From the music to the sound effects, and the voice overs Ys: Lacrimosa of Dana delivers in this department. Once again this score will be updated after I experience the Vita version. Most Vita games have had some audio issue before, so I’m hoping this Vita version will not have it.

Audio Score: 5/5 – Ys VIII: Lacrimosa of Dana delivers in the audio department. In all aspects, it sounds great and fits into the game really well. 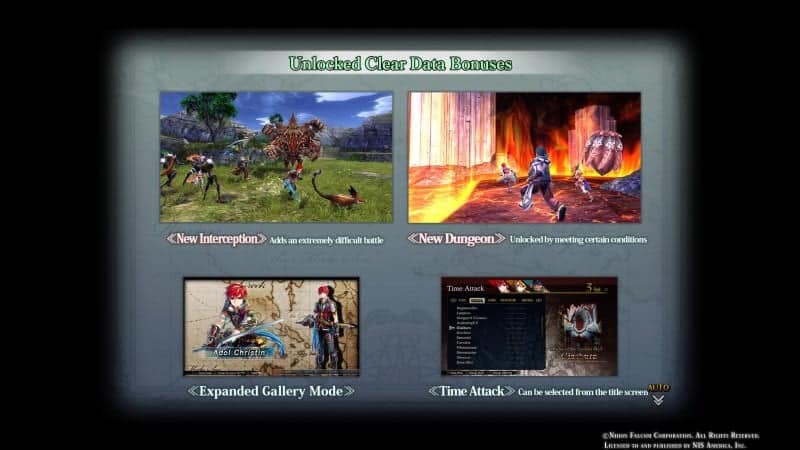 To keep this a very short answer, Ys VIII: Lacrimosa of Dana has a good amount of replay value. From finding all the survivors to doing all the sidequests to 100%ing the map, New Game +, and even more that are not mentioned here to prevent spoilers. There is a wealth of content for all players to discover, replay, and enjoy.

Replay Value Score: 5/5 – Ys VIII: Lacrimosa of Dana has a wealth of content just waiting to be discovered.

Once again to keep this short, the game is fun. It has been a long time since I had a game put its hooks out and just reel me in. From beginning to end I was immersed and just loved every experience I had with the game. I put about 68 hours into the game and I do not regret one minute of it.

Fun Factor: 5/5 – It has been quite some time a game has had been fun to this level for me. Ys VIII: Lacrimosa of Dana does not disappoint. 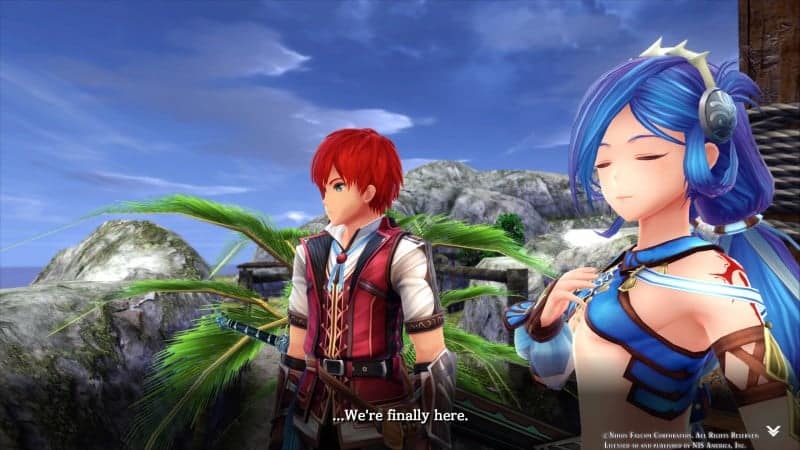 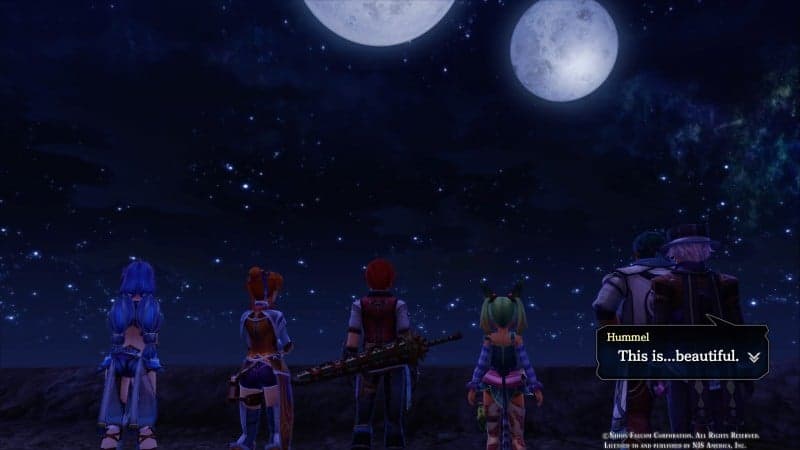 Intro/Story score: 4/5 – From beginning to end, Lacrimosa of Dana will have you interested and engaged in the story. In order to fully understand the story, the player needs to make sure they are focused as they are playing the game. Otherwise, they are stuck reading journals and logs.

Gameplay score: 4/5 – Ys: Lacrimosa of Dana shows how the evolution of the Ys gameplay has progressed. It is a delight to play the game and experience it. Just be ready for difficult enemies if you are not ready for what lies ahead in terms of story and exploration.

Visual score: 3.5/5 – Lacrimosa of Dana looks good compared to other ps4 games, and Ys games. However, certain spots of the game have the visuals dropping which affect even the framerate of the game. This will hopefully be patched out by day one.

Audio Score: 5/5 – Ys VIII: Lacrimosa of Dana delivers in the audio department. In all aspects, it sounds great and fits into the game really well.

Replay Value Score: 5/5 – Ys VIII: Lacrimosa of Dana has a wealth of content just waiting to be discovered.

Fun Factor: 5/5 – It has been quite some time a game has had been fun to this level for me. Ys VIII: Lacrimosa of Dana does not disappoint.

A gamer and jack of all trades. I enjoy many things, but overall just enjoying life. Hopefully, I can add enjoyment to your life through my articles or interactions.
@mgs2master2
Previous Vita: News about YifanLu’s psvsd project
Next Vita: Major Adrenaline eCFW update now available!