In the midst of all the games that are coming out, sometimes you wanna sit back and cut loose. Touhou Genso Rondo: Bullet Ballet does exactly that. It is a bullet hell and fighter hybrid. This is the first I heard of something like this. Does it hold up well? Read on and find out. 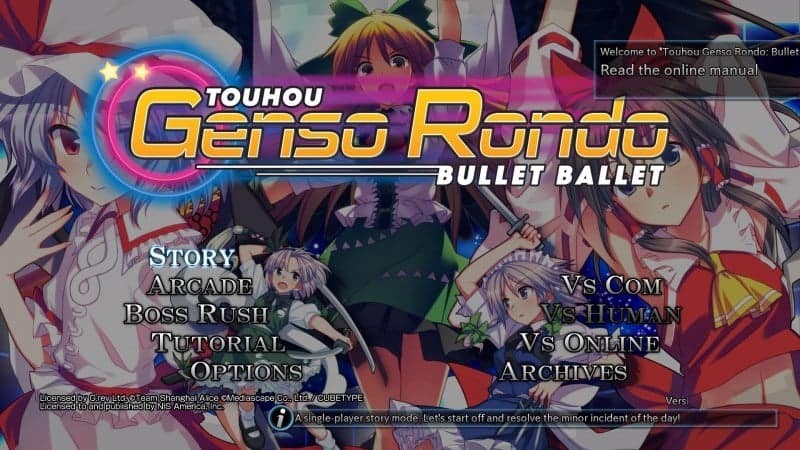 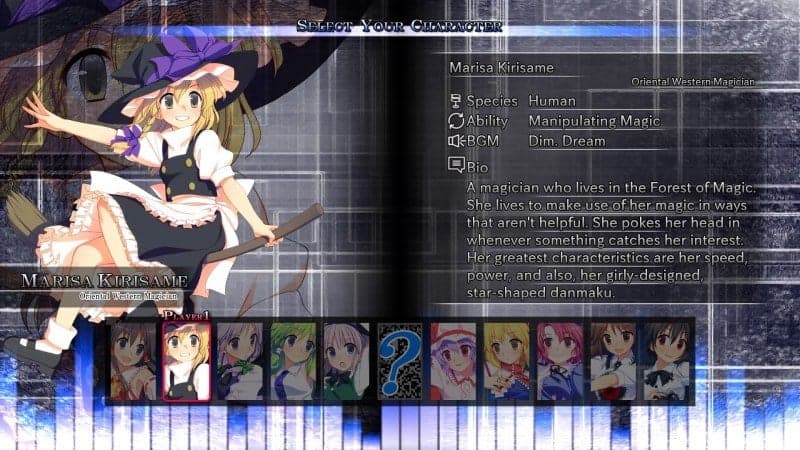 From the official site:

Somewhere in Japan, the Great Hakurei Barrier separates Gensokyo from the rest of the world.
Although it has no ocean, it contains an underground world called Hell, and a world in the sky above called Heaven.
It is said that things that have been forgotten by the outside world, as well as living things that have gone extinct, find their way to Gensokyo.
In this world of abundant nature, which has not be sullied by industrialization, humans and yokais live together…though not peacefully,
and disputes are always erupting. The yokais are always causing incidents that stir up all of Gensokyo.
To resolve these issues, they have implemented “Spell Card Rules,” a.k.a. “Playing Danmaku,”
which allows humans and yokais to fight against each other fairly.
Because of these rules, yokais cause trouble more often, and humans have to resolve these problems daily.
This is a normal day in Gensokyo, where Touhou Genso Rondo: Bullet Ballet takes place…
Now, let’s fight our way through the hectic and fun events that make up a normal life in Gensokyo!

Taking this brief explanation, I will expand a bit further. You get a colorful cast of characters and each character has their own story. With that in mind, you understand what makes up a normal day in the world of Gensokyou. I personally enjoy the way the story was told. You are given story before a fight, and after a fight. The cast of characters makes it much more enjoyable as well. However, as we all know, that does not make the game. How does the game play and is it fun? Read on and see. 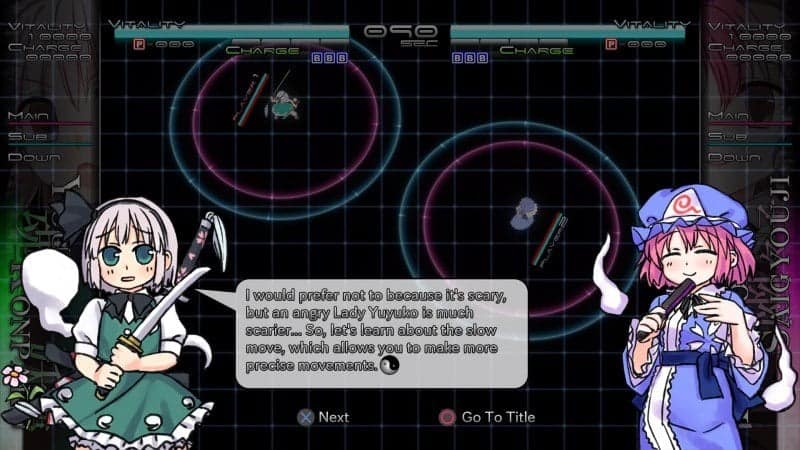 The first thing I want to mention is this game has a tutorial. It is very in depth and I recommend it. The tutorial is fun and very informative. It is not that long and gives you all the tools you need to play through the game. Go for it. I won’t touch on the how to play in this section as the game does it very well. 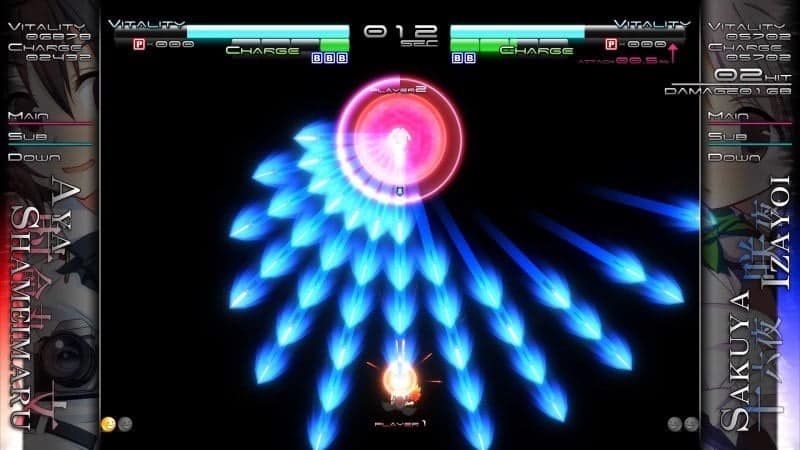 This is the screen in battle. As stated, it is a bullet hell and fighter hybrid. You will use all your bullet hell attacks to attack your opponent to defeat them. You have basic attacks, special attacks, and close combat attacks. 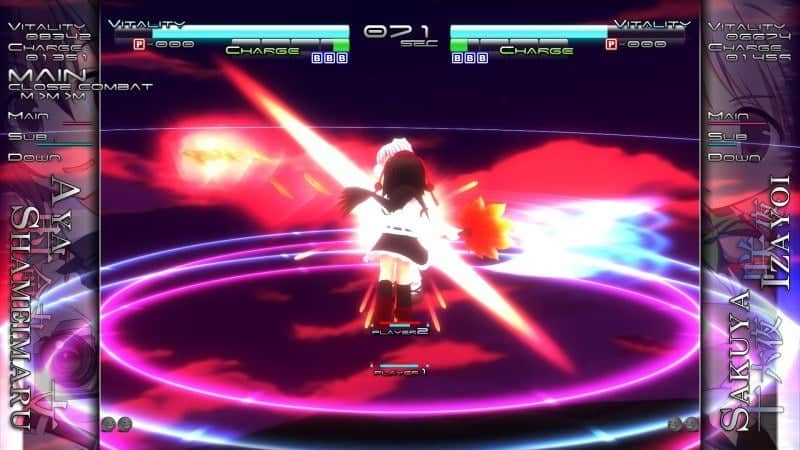 Close combat zooms in the camera and you see the visual attacks occurring. It is cool to see it and it varies all the bullet hell type attacks. All of the attacks are very easy to do and it is very smooth to do. it is simple and fun to take part in battles. 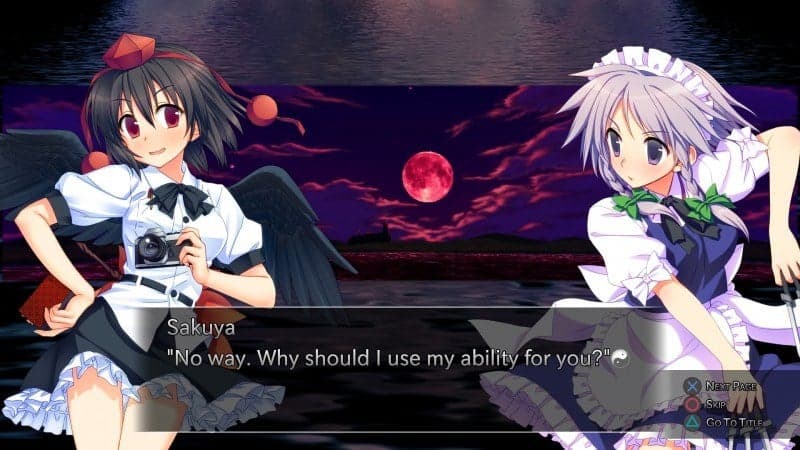 Visually: Story is delivered in the format above. Like most recent reviews I have done, you are given the characters in front of a card stock image, while you get fully voiced (Japanese voices) dialogue. This game seems like a budget title ($29.99), but for the budget, it is, visuals are good. 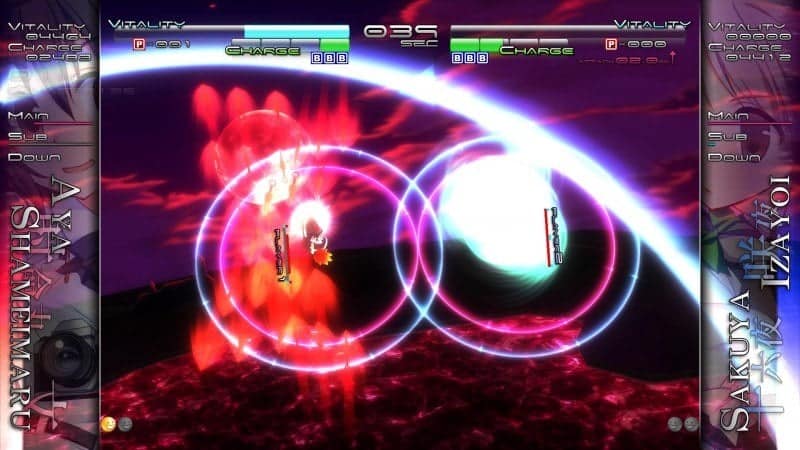 In combat, you get the graphical visuals. It looks alright. You are given a few different backgrounds. However, being a bullet hell game, you might not be accustomed at everything going on at once. At times, I found myself struggling to figure out what was going on at times. At least it looks good doing it at times.

Audio wise: The soundtrack is fine. Each character has their own songs and the title theme is awesome. In the game, the character’s voices are on point, done well, and the sounds made during combat are fine. Combat sounds are good too. Everything fits and flows well.

*Don’t mind the link, it is a 15-minute version of the song. Listen a few minutes.

In all video games I play, I want to make sure I get a good soundtrack and audio in general. This game delivers in this aspect. 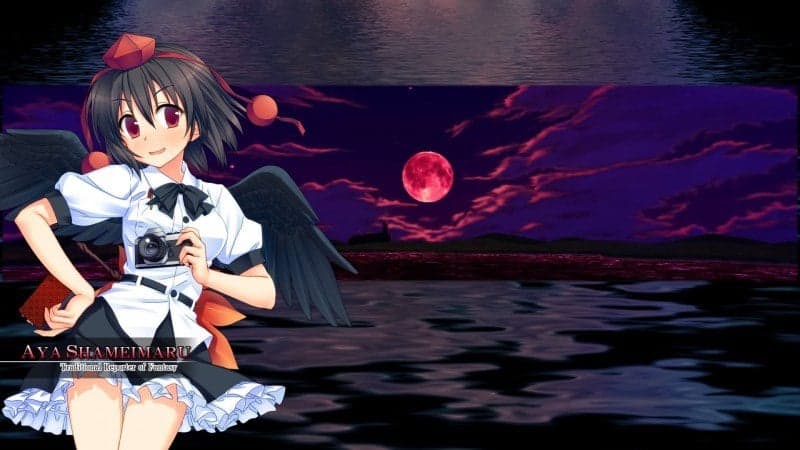 With several different stories, a good size of characters, and varied modes of access, there is a bunch to do. To keep it short and sweet. This game has replay value. Is it high as other games? Not really, however, it is there and it is a good amount. 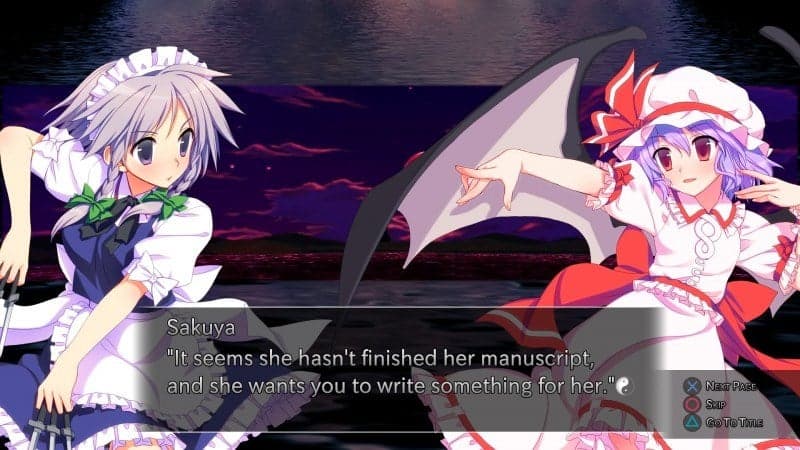 The main question, is the game fun from my opinion? I will say yes it is quite fun. In all the current wave of games coming out right now (RPGs, action, adventure, etc.) It is good that this game came out. It is a very much well-needed break from all of that. You have a game that is easy to pick up, simple to play, and fun all around. You can get lost in the game and just enjoy yourself in this hybrid of a bullet hell and fighter game. I enjoyed my time with this game and it was very fun. 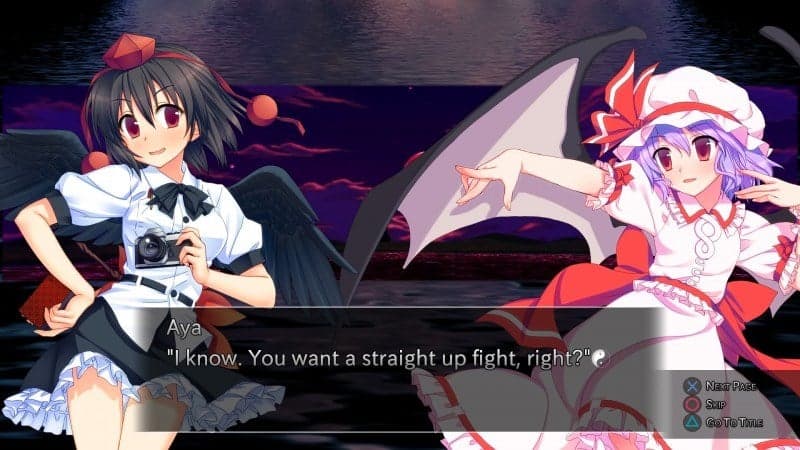 Overall, Touhou Genso Rondo: Bullet Ballet is a fun game. As stated, in the current wave of mainstream games, this game was a delight to play. It is very simple to play, it has very interesting stories, and is very fun to boot. For being a 30 dollar title, you get your money’s worth. I recommend picking this game up. It was a good break from the wave of other games I was playing. In addition, the game is just simple fun. Not many games can do that these days. Until next review, Mgs2master2 out!

A gamer and jack of all trades. I enjoy many things, but overall just enjoying life. Hopefully, I can add enjoyment to your life through my articles or interactions.
@mgs2master2
Previous Kojima’s Death Stranding Is About Connecting People
Next Ubisoft Officially Confirmed “Collector’s Case” Edition for Assassin’s Creed: The Ezio Collection