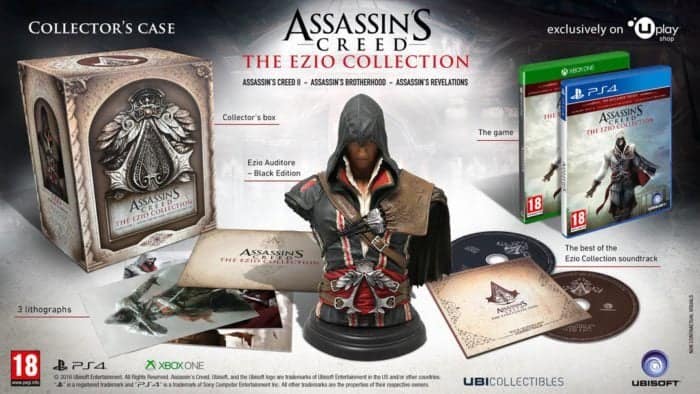 Ubisoft officially announced Assassin’s Creed: The Ezio Collection slated to release on the PlayStation 4, Xbox One and PC on November 15 in North America and November 17 in Europe.

Due to leaks from a Korean Games Rating board late last month, all but the confirmation from Ubisoft was present regarding the collection.

Regarding visual enhancements, the collection for the PlayStation 4 and Xbox One will feature “enhanced graphics” however Ubisoft have not confirmed details about resolution or frame rate.

This includes a black Master Assassin outfitted Ezio statue bust, a 40-song collection of “the best Ezio collection soundtrack” and a trio of exclusive lithographs.

Also included in the collection is a free ticket for the upcoming Assassin’s Creed film that will release in theatres on December 21.

In Ubisoft’s official blog post, they revealed that the iconic franchise had sold more than 100 million copies.

Senior Producer Martin Schelling said, “to have this franchise join the ranks of those that have reached more than 100m sold is a testament to the teams that have taken on that challenge over the years. ”

As previously mentioned in our original posting, the bundle will come with two short films Assassin’s Creed Embers and Lineage.

You can watch the announcement trailer below – In the meantime don’t forget to follow us on our official Twitter pages @Hackinformer and @geestaar74 for more news on Assassin’s Creed.

I like to get everyone the right info and I like to help others get the most from there electronic devices. I enjoy playful cleverness and the exploration of technology. My Motto: You own it, you can do whatever you want with it.
Previous Review – Touhou Genso Rondo: Bullet Ballet
Next We need your help