It’s the 1940s, the setting is Tokyo, and the world is vibrant. During this steampunk era in Toyko, Seijuro Kamiyama begins as the new captain of the Imperial Combat Revue’s Flower Division. On his arrival, a chance encounter reunites him with his childhood friend Sakura, a member of the Flower Division. From that encounter, and meeting the rest of his colleagues, Kamiyama’s life changes. With a renewed purpose and goal in life, and new life injected into the Flower Division, cue Sakura Wars! Let’s take a look at how the 1940’s soft reboot of a beloved franchise takes form in our review! 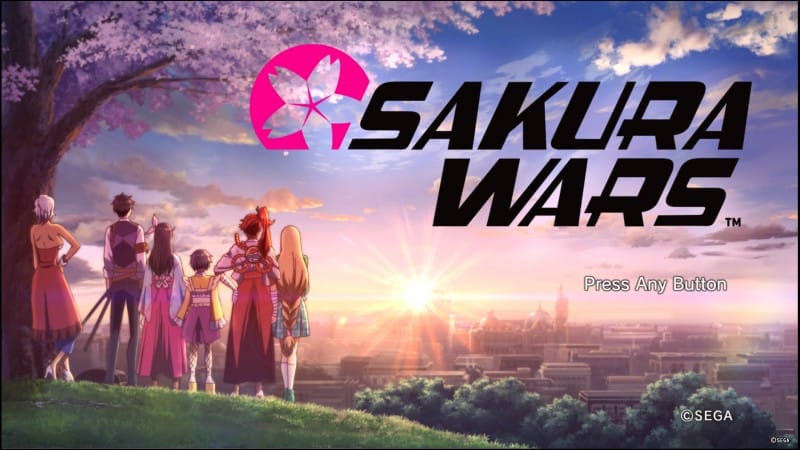 *Special thanks to Sega of America for providing a review key* 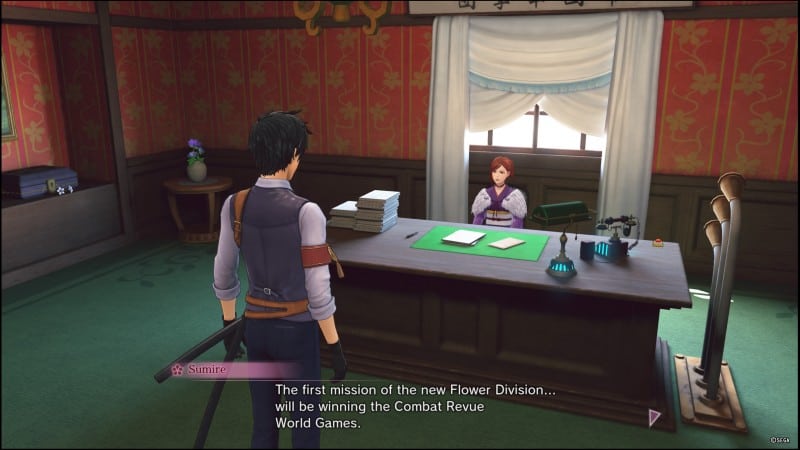 From both the PR and official website, here is a synopsis of Sakura Wars:

The stage is set in a steampunk version of 1940s Imperial Tokyo. Only a short while ago, a cataclysmic event destroyed the Imperial Combat Revue of Tokyo, the capital’s global defense force stationed at the Imperial Theater. Now home to the Flower Division, an inept rookie squad who also strives to impart hope on the citizenry with their theatrical talents, the theater has fallen on hard times and risks closure. It’s up to Seijuro Kamiyama as the captain of the new Tokyo revue to lead his squad and restore the Imperial Combat Revue and the theater back to their former glory! With the help of the revue’s five colorful performers, he must rise to the challenge of competing in the Combat Revue World Games, protecting the inhabitants of Tokyo and getting the theater back on track. 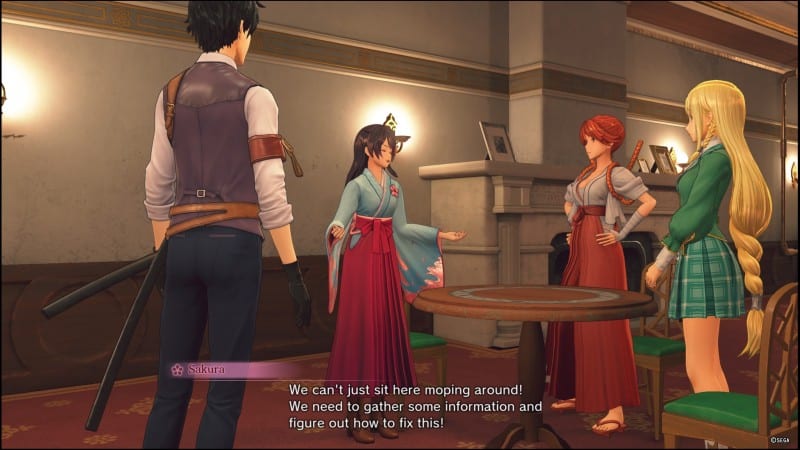 Sakura Wars has three different types of genres wrapped up into it (this will be elaborated more in the gameplay section). However, with the package of these genres, the result is the game feels like an anime. I am aware that Sakura Wars is an anime that has been around for some time. Additionally, I know more anime is to come following this game. It feels as the development team all had that idea in mind as they created the game. 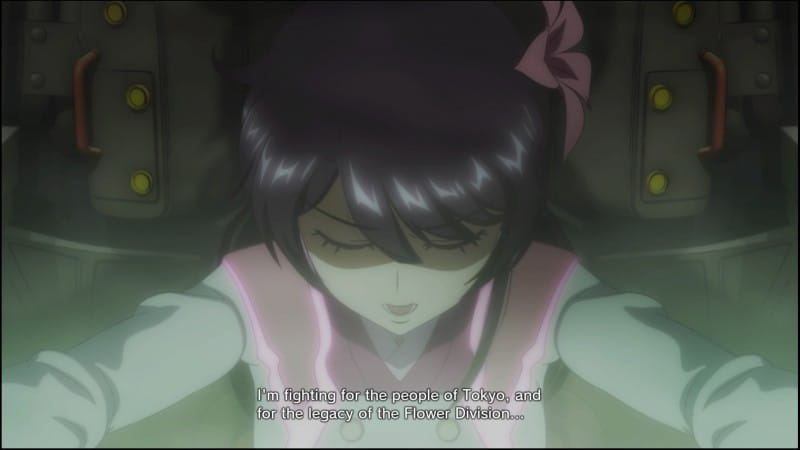 As a result, Sakura Wars is an anime with different arcs. Each chapter is a different arc of the overall game (or anime if we continue to run with the comparison). You get each major story arc, and that comes with battles, and the filter content (as in anime) is all there. It is done surprisingly well. It provides a story, and character-driven experience as each arc undergoes the trials and tribulations with all those involved. 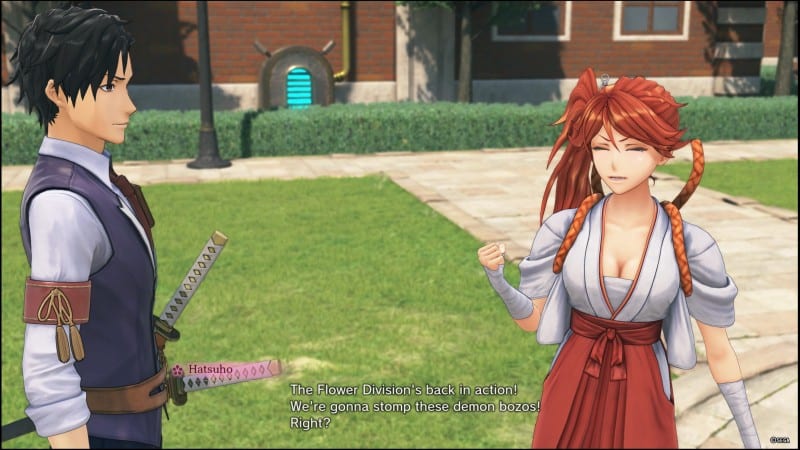 Additionally, this game is advertised as a “soft reboot” to the Sakura Wars franchise. For all intended purposes, this is correct. I know next to nothing about the franchise as a while, and my only experience with the franchise is not even a main entry. I had my exposure with the characters through Project X Zone and Project X Zone. There are references and little hidden easter eggs (aka Bromides) hidden throughout the game too about them, but this is a new story. 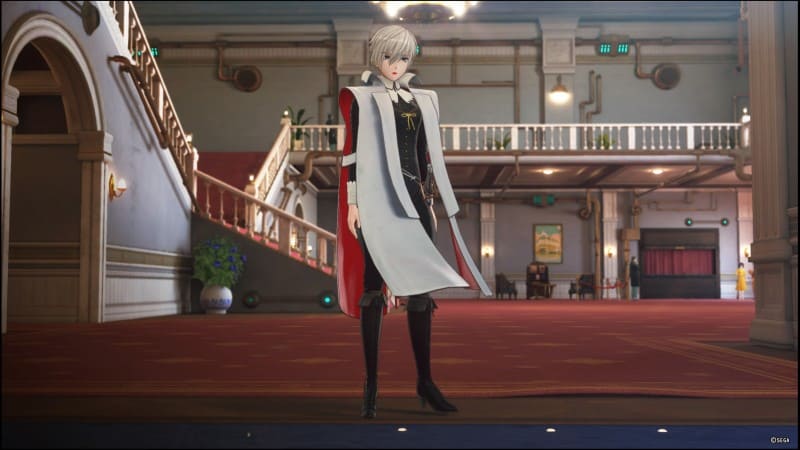 As a player, you can tell that the development team put a lot of love and thought into the development of Sakura Wars. They wanted to make sure these aspects were well crafted. It could be stated that it may feel “too anime,” but based on my time with Sakura Wars, it feels to be the perfect balance to drive the story. It does it well, and that is unique. I am an RPG gamer at heart, but I play everything, even the game that’s are “too anime.” However, throughout my time with it, everything is crafted tight to drive the overall narrative, the characters, and have a delicate balance between it all as an anime would. I applaud the dev team on this front. 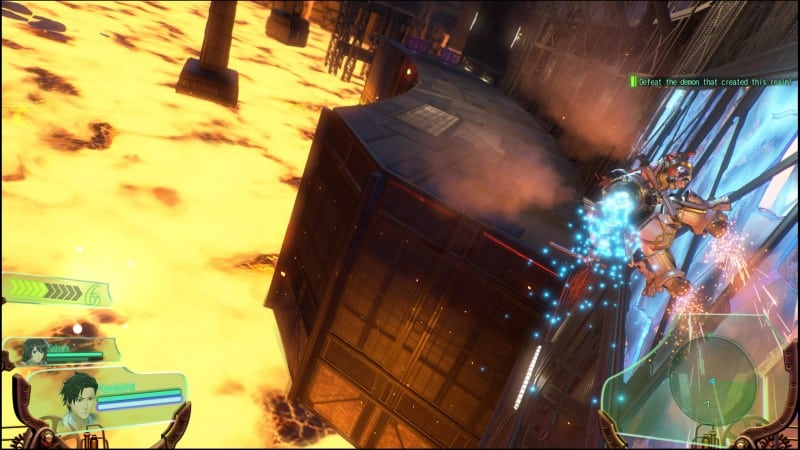 The gameplay is divided into two different aspects. There is the adventure mode, which is just the story, which is a visual adventure novel feel. This aspect has multiple layers to it as well, which will be touched on shortly. The second component is the battle mode, which takes place within the story and through the battle simulator computer. This may sound odd written here, so I will break it down a bit on each aspect due to the fact the game provides in-game tutorials on all parts of the game. 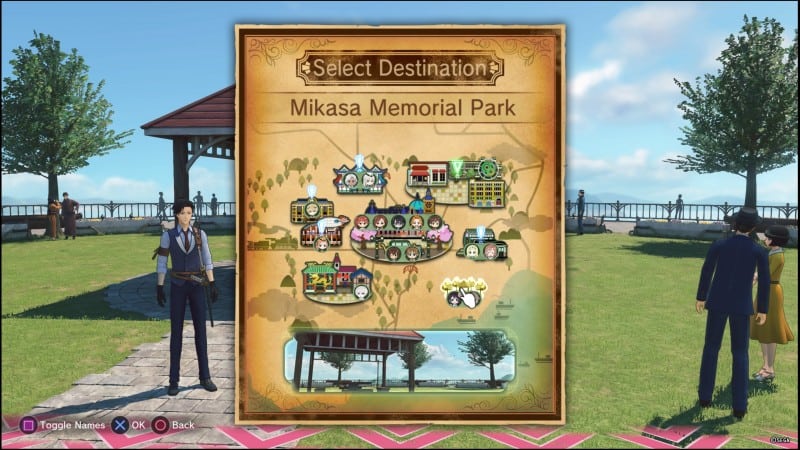 Adventure mode is the actual main game story. There are “visual novel” aspects of the images used for certain character developments or events. Still, it is very much “hey, this green exclamation mark is to proceed to do the story, however here is a bunch of blue exclamation marks to see side stuff, do side quests, and build relationships.” So while it may seem very “visual novel,” it is an adventure RPG that you are free to do from what is available in this world of steampunk Tokyo. Building relationships is essentially building the affinity between Kamiyama and those he encounters. Thanks to the addition of the day one patch, players can now save anywhere. Before the patch, the game autosaved at every decision made. This was a welcome fix. 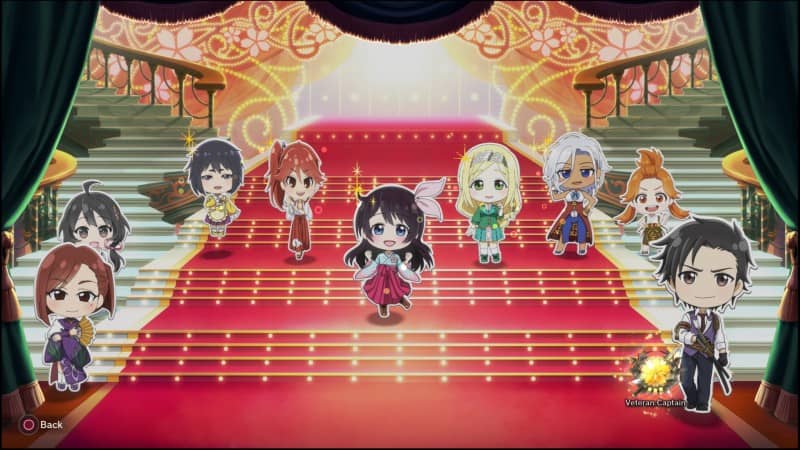 It is not just limited to his Flower Division squad, but those he meets through battles or just world exploration. At the end of each intermission segment (as the game calls it), the player can see their ratings with those Kamiyama encounters. The Flower Division ladies are the main focus, but you see the bonds created with those in the game as well on the “Stage.” It is done rather well and looks aesthetically appealing. 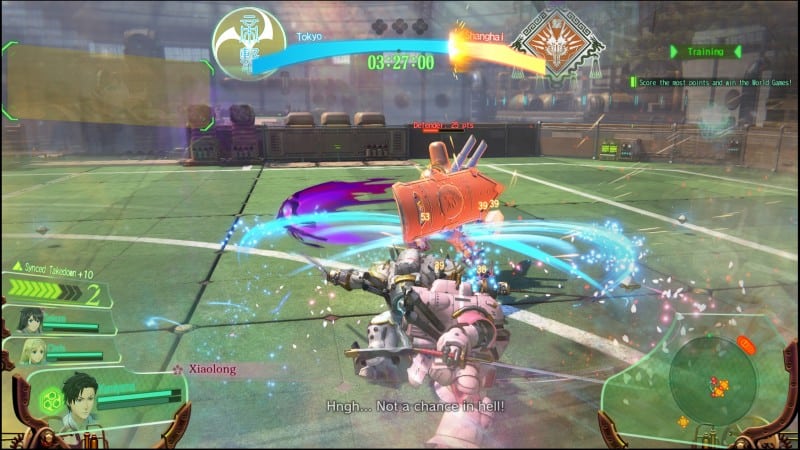 The battle mode, I feel, while fun is the weakest part of the game. With no excellent way to say this, it is a Dynasty Warriors (or Musou) battle system. If you are not a fan of that battle system, you won’t be a fan of it here. You have combos to do inside your MUGEN robots, you lock-onto enemies, and advance forth through each stage. The addition to it as that during missions, you are paired with one of the other Flower Division squad members. You can switch on the fly, which can call for creative strategies to take on some of the more annoying enemies. Each member has a special move as well and unique attacks. 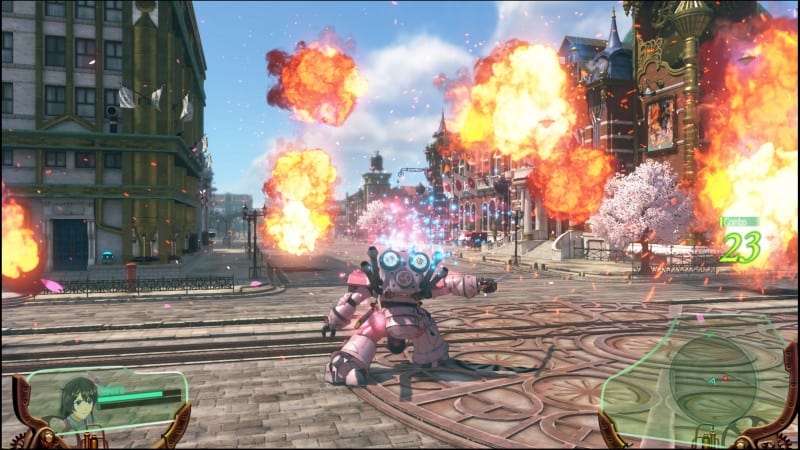 While I understand the battle mode of the game is not the primary focus, however important it may be to the story, it feels like a Warriors game. It can provide the basis of what may come for future games, such as doing team attacks or team specials, but right now, it is just a musou system with a couple of new elements and tweaked better than most musou games. I appreciate the change-up from adventure to this. However, players that were not expecting something like that might need to prepare themselves. Thankfully the battle portions only make up about 1/4 of the game.

As of this writing, version 1.01 (the day one patch) was implemented. Before the patch, some aspects of the games were frustrating. For example, hard saves only being limited to intermissions before battles, and no lock-on system during battle. Below is a list of what the day one patch fixed and included:

One new feature I would love patched in is a stats page, if possible. This would show the current affinity levels, the total playtime, and other information that is usually available in other RPGs. However, thanks to the day one patch, any issues I had with the game were remedied. Hats off to the development team for addressing them. 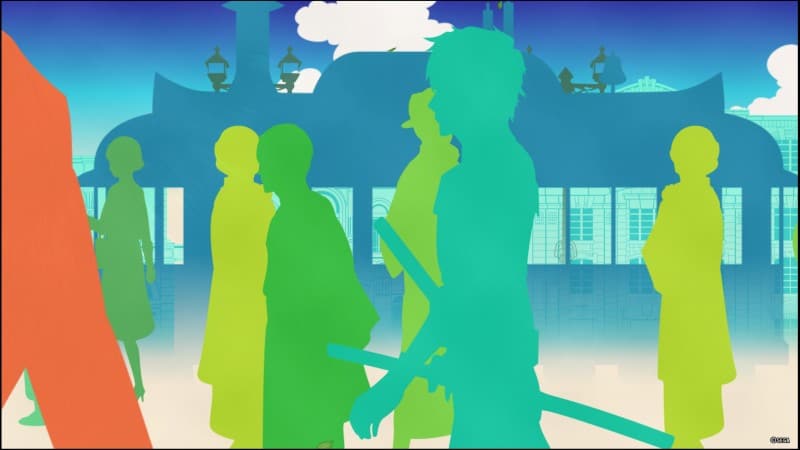 Visually, the game is eye-candy. It is a gorgeous game to look at, and it’s aesthetically pleasing. From the in-game character models, to the cutscenes, to the battle environments, to the different locations of the world, and everything in-between, Sakura Wars is just a beautiful game. While the battle environments do look well, some of them do look bland too. However, that aspect is understandable due to in-game explanations of them taking place in a bleak, dark world. It fits with having that overall feel. 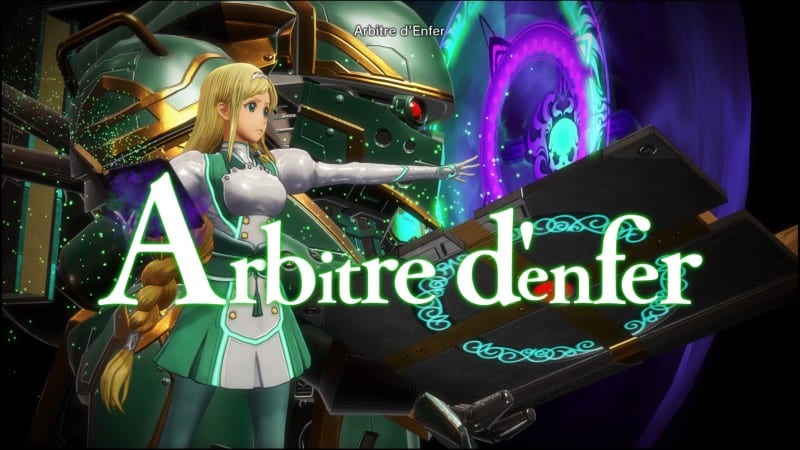 Audio-wise, the game is Japanese only voices with English subtitles. The voice-over team does a fantastic job of delivering their lines. The inclusion of the music is also rather well done. It gives that overall anime feel the way it is used. For example, let’s say during a battle something happens where the players are being overwhelmed (as in animes this tends to happen), suddenly something occurs and shifts the tides to the favor of the player. At that moment, the main theme, or some high beat theme, gives the feeling of “LET’s GO!” so players feel that energy to turn the tide. It is done well in animes, and the team made sure that was done well here. 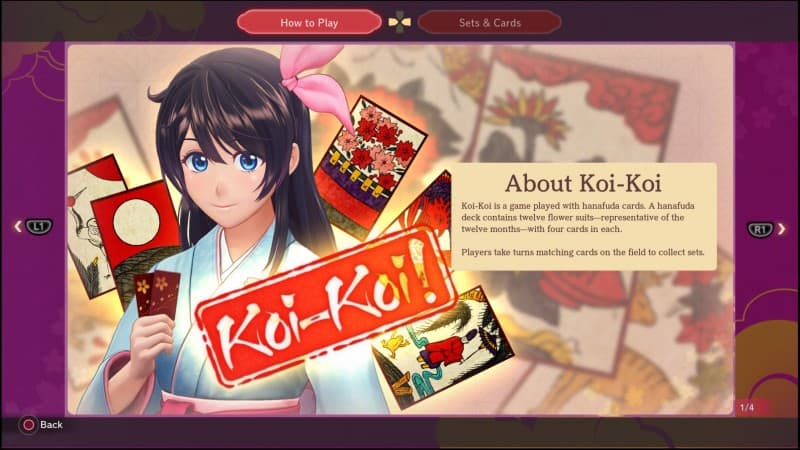 I had fun with my time with Sakura Wars overall. Eventually, the combat sort of became grating, especially when finding out how overpowered you can get rather quick at each level and how some characters are fundamentally broken in combat. It went from “let’s enjoy this” to “let’s get this done quickly to get back to the story.”  My main draw here was the story, and it was entertaining to experience that and the side stuff as well. 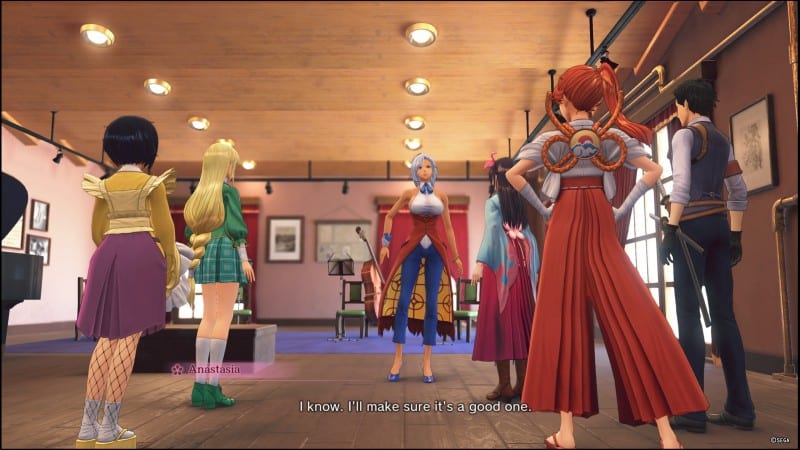 The game has a proper new game plus mode. It is enjoyable playing through it. However, in terms of any sort of deviation, the main story ends in one way, and there are characters endings. For completion purposes, people can replay to get different character endings. However, the New game plus is fun, so that adds to the replay value. 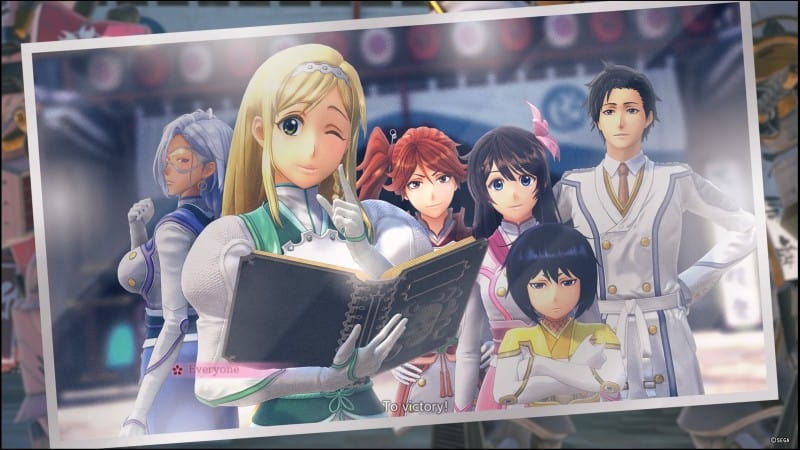 Sakura Wars is a soft reboot to an existing franchise, which is done rather well. The game feels like an anime series going through several different arcs, and everything that makes up an anime entails it. However, this game is not anime. The fact the developers nailed this feeling for Sakura Wars is unique and fantastic. I found myself enjoying the game and engaged to see where the story will go next.

My complaints about the games were all addressed in the day one patch, which is available now. Right now, as it stands, the only low point I have for Sakura Wars is the combat. Being a fan of Musou games, I like this, but it becomes wearing after a while, especially how easy it becomes to power through each level quickly. This could be a blueprint for future titles, so I hope this aspect improves. 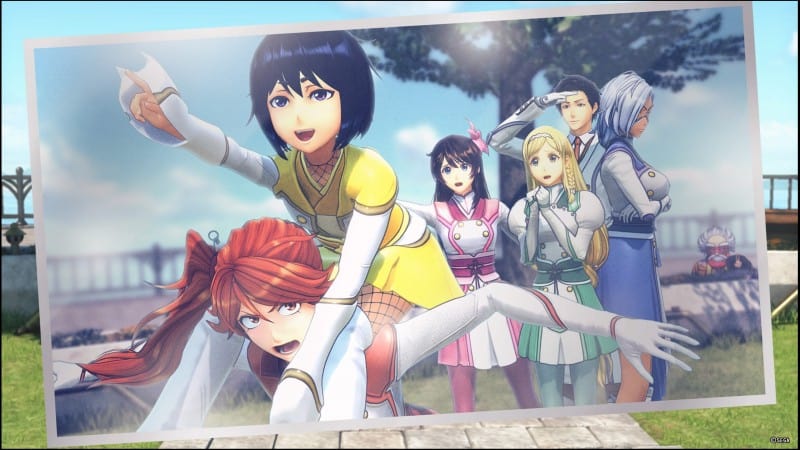 During the gaming season, where a ton of huge titles are launching or just launched (Persona 5 Royal, Final Fantasy VII Remake, and others), Sakura Wars sneaks its way to launch. I am thankful I got to play this game as it provides for a different experience out there, which is somewhat refreshing. The game is not super long (12-15 hours), but it was enjoyable from start to end. I recommend the game to anyone who was to try something different or is a fan of the franchise.

Even if you had little to no exposure with the franchise, some fun could be had in Sakura Wars. This is due to the part of how it’s carefully crafted and built to feel like an interactive anime experience that is very enjoyable. Hats off to the development for taking that risk to deliver a unique experience.

*Special thanks to Sega America for providing a review key!*