Surely most of you have had to move for one reason or another in your life. Those of you who have most likely used a moving company or wanted to. That’s where the game Moving Out (SMG Studio/Team17, $24.99) starts you at, working for Smooth Moves as a F.A.R.T. (Furniture Arrangement and Relocation Technician). It’s time to learn the dos and don’ts of moving furniture. Let’s see if this game is worth it! 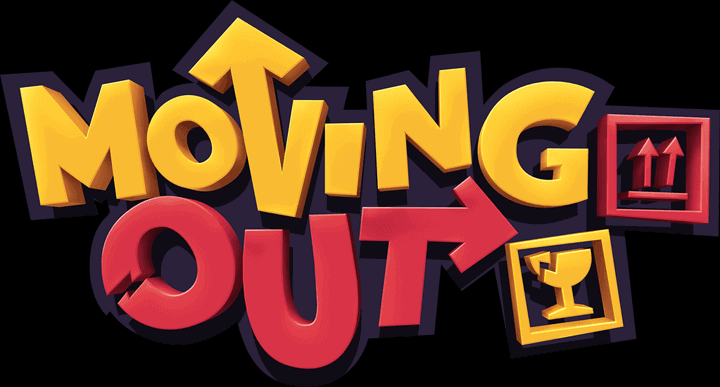 ‘Are you ready for an exciting career in furniture? As a newly certified Furniture Arrangement & Relocation Technician, you’ll take on moving jobs all across the town of Packmore.
Smooth Moves may not be the biggest moving company, but there’s no task too dangerous or strange for this busy team of go-getters. Grow your business to brave new heights, recruit colourful customizable characters, and save your town from furniture peril!’

‘Co-op!
Enjoy the story mode solo as an independent contractor or team up with some friends. Up to four players can cozy up on the couch to argue over the best way to move a couch. Test your skills AND your friendship!

Physics!
Are pesky doors and windows standing in your furniture’s way? Just blast through them with physics! Lift, toss and smash your way to the fastest times!

Action!
Learn the ropes in a series of increasingly precarious and fantastical moving jobs. How a bed gets from point A to point B is never a straight line, so throw out the training manual and get creative!

Adventure!
Every moving company starts small, but as your reputation ranks up, so do your destinations. Move through sleepy suburbs, frenzied farms, haunted houses, virtual reality and lands beyond!

Characters!
Recruit a unique cast of colorful characters, each packed with a passion for manual labor!

Assist Mode!
Are you a rookie? No problem! Adjust the game’s difficulty so anyone can play!

Don’t wait! Grab your friends and become a certified moving master in Moving Out today!’

Let’s start with the visual side of things first. As you can see from the trailer and the screenshots, it’s an isometric top down game. The graphics are very clean and there are so many fine details. This is true of both the levels and the characters. If I had to make a comparison, I’d have to say that it looks something akin to The Legend of Zelda The Wind Waker. I mean that especially the of  characters. The level design is also great, it adds some fantastic challenge that are easy to learn and difficult to master. I love the fact that the graphics are modern enough that they look grand but also are simply enough that they can run on the Nintendo Switch.

With regards to the audio, there’s not a terrible amount to say. They found a way to strike a balance between annoying and ignored. You have a soundtrack that gives you a nice mix of songs that give a sense of urgency and fun. Nothing really sounds too repetitive, in fact, sometimes you’re too distracted to notice. But conversely when you are paying attention to it, it works well. I remember thinking to myself that it’s some really great music for the mood of the game. If I were to compare the music to anything, I’d say it’s some 80’s elevator music. It’s uptempo and has a synth sound to it, but it wouldn’t make your children cringe. 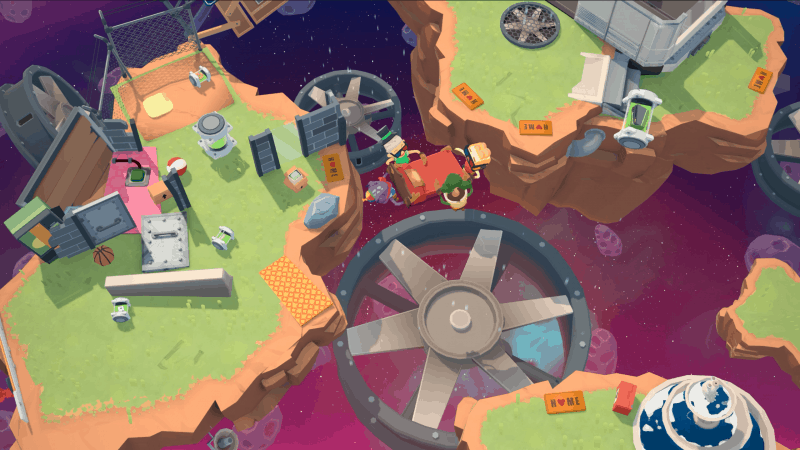 You start off this title with a tutorial on how the physics based gameplay works. The game sends you from place to place helping people…well…move out. You’ll take the truck from place to place and experience different missions. They’re all comprised of moving items to the truck. You’ll be moving appliances, furniture, and other large objects out of the person’s house. You’ll have to figure out how to get differently shaped objects through the doorways and around other objects. The physics in the game are working against you as you work against the clock to get the truck loaded. The clock is keeping time and you’ll be judged according to your meter. The part you have to remember is that you have to keep the timer going. You need to constantly work on keeping the time going. If the clock runs out, the level fails you out.

The game has you unlocking more objectives for an area if you complete the regular mission. These extra objectives are definitely varied and it would be hard to cover them all. You do get three of them per completed mission. And they’re on both sides of hard and easy depending on the hand you’re dealt. Some I felt were easy and some I had to try more than once to complete. It’s always so fun to have a game that makes you go, “Man, I can do better than this!” and try again. When you complete the objectives you get more medals. The extra medals get you some platforming type levels. These are pretty different from the main gameplay and may not be as fun as the rest of the game. It’s really up to you if you like them or not. They’re cute and decent enough, but they’re not what I like Moving Out for. 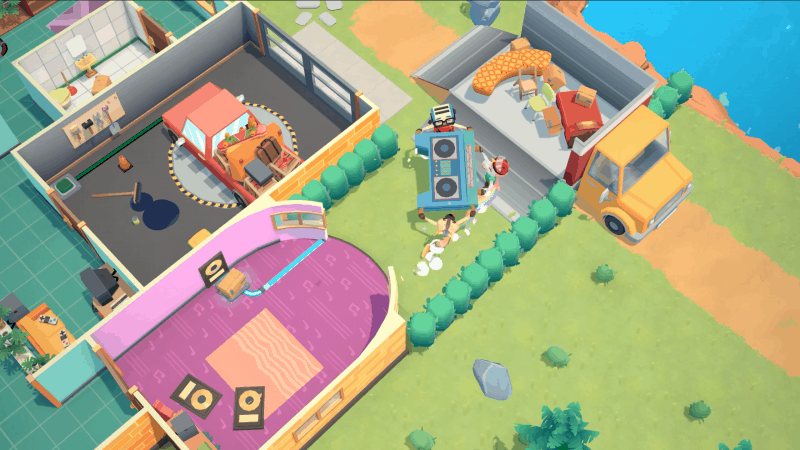 I think what I like the best about this game is the fact that it is just so replayable. Especially if you’re someone who is constantly hosting guests. To set the see the looks on their faces as they learn how the gameplay works is a treat. And not only that, it’s truly a game for everyone. You have the fact that it’s easy to pick up and learn. You also get accessibility options if someone needs them to join in on the fun, one such accessibility option would be the clock. You can extend the clock in an effort to let kids join in and have a little more fun. Think of it kind of like bumpers on the lane at the bowling alley. There is also plenty to unlock as you go. This is true of both characters and fun single player modes. That means the fun can continue even if you’re all alone!

There is also the part of the game in which you get graded. All of the levels give you a bronze, silver, or gold score. If you happen to have gotten a lower grade on a level, you can always go back. I loved trying to get a better grade than my previous score. It’s also the case with the extra missions, if you have more to beat, then the game lasts even longer. Another fun thing to do is to play the game with more than two people. It’s playable with two, but it’s hilarious with four. Now obviously I wish that there was an online mode to let us be able to play four people all of the time. This would extend the fun and hilarity of the game even further. However, I don’t think that the lack of online cancels out the value of the game. 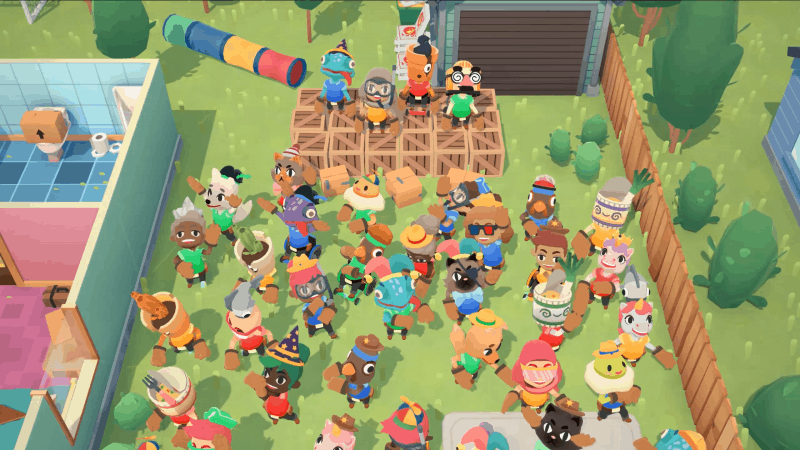 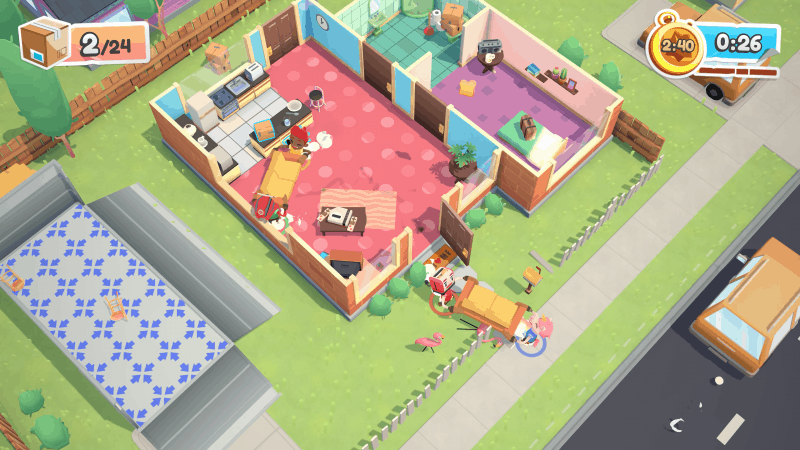