Today’s review comes to us straight from Brazil. That’s not a place that you hear of too many games coming out of, but recently, there are been plenty popping up. Our title this go around is Horizon Chase Turbo, a throwback to classic arcade racers. If that doesn’t tell you that you should go buy it right now, don’t worry. We’ll tell you everything you need to know about Horizon Chase Turbo (AQUIRIS, $19.99), just released for XBOX One and Switch with new modes! 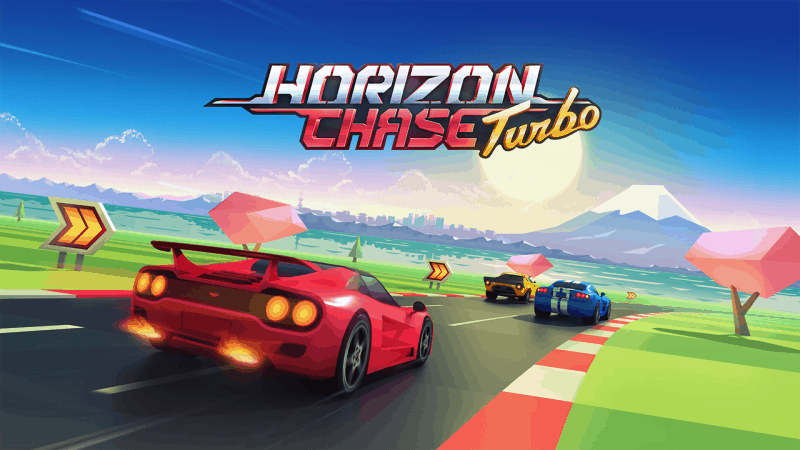 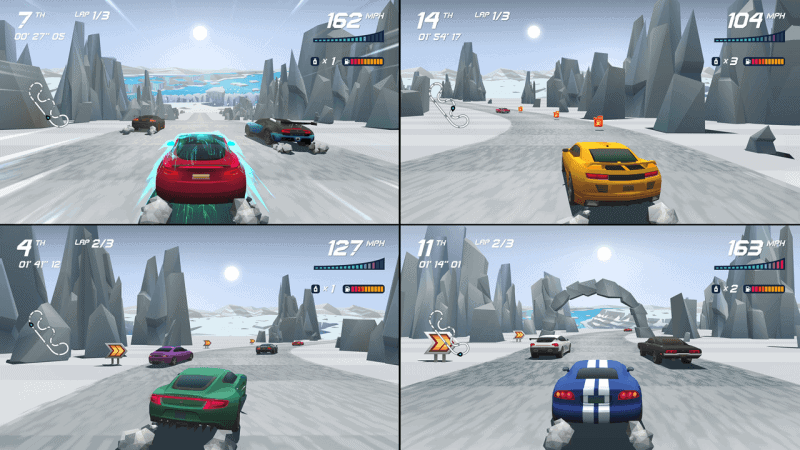 ‘Horizon Chase Turbo is a homage to classic 16-bit racers that defined a generation of high-speed and frenetic arcade fun like Out Run and Top Gear. The game is conceived to ignite an instant blast of nostalgia with catchy contemporary music composed by the legendary Barry Leitch (who also created the soundtracks for the Top Gear, Lotus, and Rush series), while also offering split-screen multiplayer and mixing retro low-poly aesthetics with modern gameplay.

The Switch and Xbox One versions will be the firsts to receive a brand new game mode called “Playground”, consisting of a set of live challenges that will be updated regularly so that players can keep competing in the online leaderboards, and exclusive content for each platform to be announced soon.’ 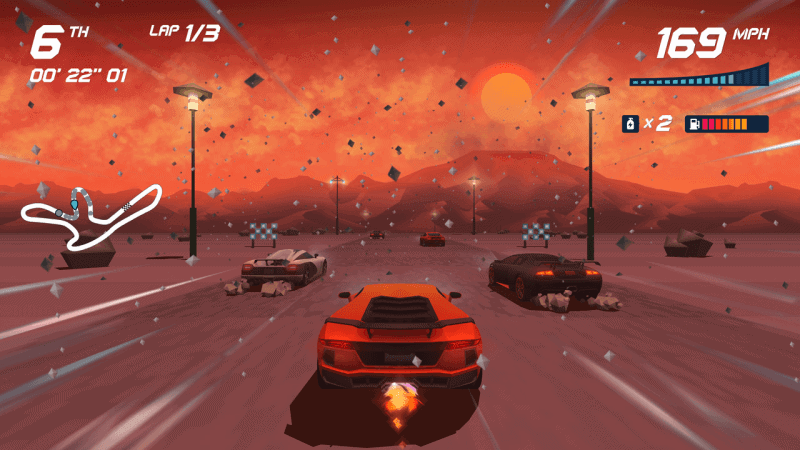 One of my favorite topics when it comes to video games is and always has been the soundtrack. And boy howdy does Horizon Chase Turbo not disappoint! I was trying to unlock more locations just to hear new music. This game features 20 fun and action-packed songs throughout. The songs don’t remind me of any specific retro game. The composer took the time to make a game with more modern disciplines. I think what he did to make the game sound like an arcade racer was give you slightly more repetition. There isn’t a buildup and a conclusion of the song per se, it’s just the right amount of the upbeat, high tempo music you’d expect in a racing game. I’m sure I’m not explaining my feelings of it properly, but I loved it.

If you end up getting the game and want the soundtrack, I found the Band Camp page for the game’s music composer Barry Leitch. Maybe you’ve heard of him? He’s made music for other arcade racing games that you may have loved like Top Gear, Rush, and Lotus Turbo Challenge! You can either listen to the music digitally or buy the physical CD. The site can be found by clicking here.

This game isn’t anything special in terms of the sound effects. The cars sound as they should, the menus sound nice, and the pickups you hit have a nice chime to them. Everything is of a really great quality. There’s nothing really more to be said about the audio that is super fantastic, but there is absolutely nothing wrong either. I think it’s worth noting that you won’t be annoyed with the menus as people are with arcade menus. This one is easy to deal with. 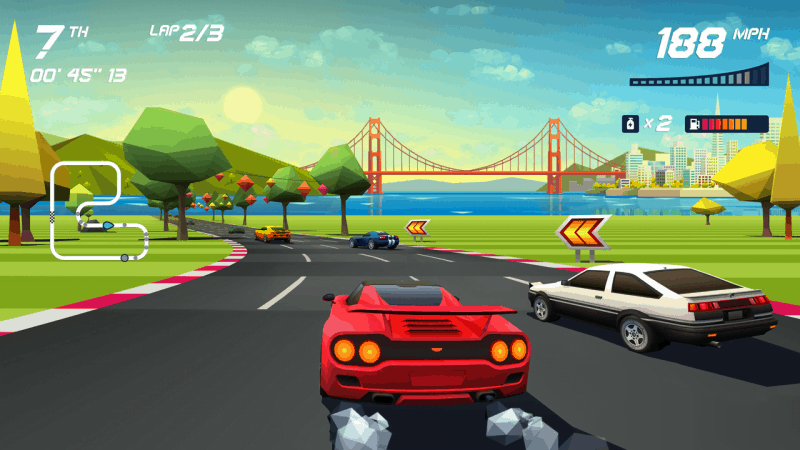 The visuals in this game are something to behold! I loved that they didn’t try to make it look like an old-school racing game and make it all old and grungy. I also really enjoyed that they didn’t try to make it ultra modern (and fill up my hard drive unnecessarily). What the team at AQUIRIS did was find a way to take the visuals right down the middle! The cars have as much detail as a mid-90’s arcade game may have had. But the graphics are high definition in the first place and it gives the cars so much more character.

Outside of that, the scenery is ultra-generic (in a good way). So you’ll find trees and buildings and rocks looking like they’re only made out of about 20 polygons but they’re also so high definition. This makes the game look extremely nice and stylistic. I got the review copy for the XBOX One, but I’ve also been playing it on the Switch. Let me tell you, it looks gorgeous on either platform. I just can’t get over how bright it is and how all of the color choices make all the difference. 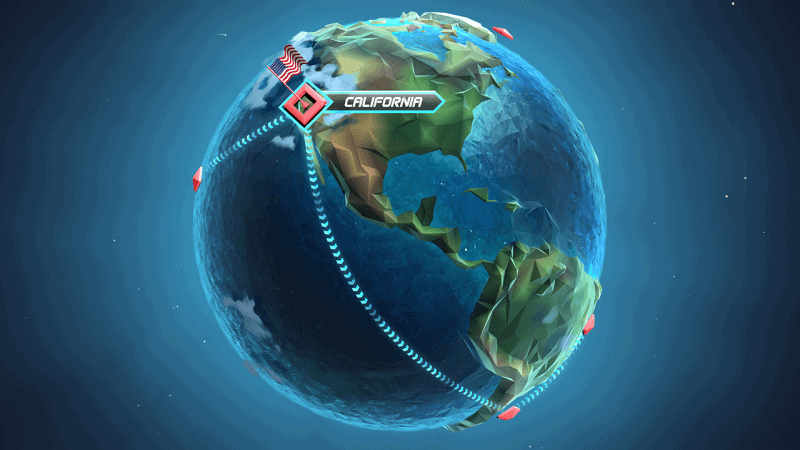 There is a lot of gameplay in this game. You’ll see down in the “Longevity & Replayability” section what I mean. So to keep it more to the point, I’m just going to talk about the primary game mode, World Tour. That way I can cover other details like mechanics, the cars, and the AI.

The features listed up above kind of already break down the specifics of the World Tour and how lengthy it is. “12 Cups, 48 Cities, 109 tracks, 32 Unlockable Cars, and 12 Upgrades.” So needless to say, you’re going to be doing a lot of racing. The good thing is that you don’t have to do extra special stuff like collect money as you drive to unlock the new cars or to buy upgrades for the cars. The gameplay alone and crossing the finish line in a higher place does the trick just fine.

The locations around the globe are an absolute treat as you’ll be seeing new scenery all of the time. This is something that keeps the game fresh without changing the gameplay entirely. It also gives them a chance to incorporate different times of day as well as changes in the weather. Some might think that that changes the gameplay, but I meant like, you didn’t have to fly your car over a mountain or something.

The difficulty is an interesting topic though. I’ve found that the game is slightly confused when it comes to how it controls the opponents. There are plenty of other cars on the road, some seem to always be behind you even if you’re losing badly. But there always seem to be some that are badass and have all the knowledge that the game could possibly have. They know exactly where the turns are, where to turn on the road, how fast to do it, how to dodge other cars with ease. It’s just crazy that there are always 2-3 cars that are that smart and 2-3 that are incredibly dumb.

I wish that those 4-6 cars were maybe improved a little bit. Nerf the front ones and improve the back ones. But maybe that’s just how the old arcades used to be and I don’t remember it? Nevertheless, it’s not a huge complaint. It’s still possible to end up in first. It just seems to be frustrating to get there sometimes and makes the win more of a chore than an achievement. I’m not complaining about the overall game either. I just think it needs some small tweaks for its AI.

The game controls well, if you were wondering. The cars steering are tight and if you drift well, it’s because you’ve mastered the drifting. If you drift badly, it’s because you don’t have it down yet. The tracks have obstacles along the shoulders as well, like the old games, so avoid them at all costs. That three second delay could cost you the whole darn race! There are pickups for you as you go. The nitro pickups are obviously optional, but if you get enough and hit the nitro button, you’ll be boosted forward. And the part that is never really explained to you are the gas cans. You must collect gas cans as you go because if you run out of gas, the race is over for you and you’re disqualified. Or in other words, just start the race over.

All in all, the game is incredibly fun in the World Tour mode and has plenty for you to do. You definitely hit the ground running and there is no explaining. But you will figure it out quickly, especially since you’ve read this review! 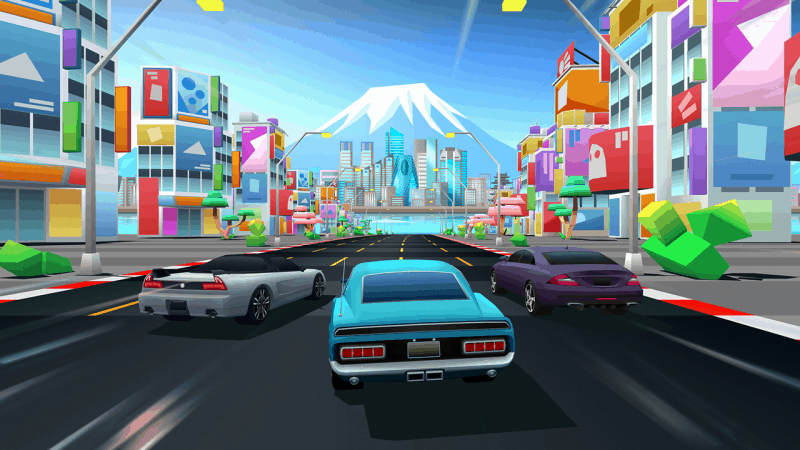 Arcade racers as a genre are generally full of replayability. They have that thrill aspect built into it. Not to mention that trying for or trying to keep that high score is a must. But the main game mode (World Tour) isn’t the only thing on the plate when it comes to this game, oh no. You can naturally keep playing that over and over if you’d like I suppose, but there are more game modes to keep the fun going. For instance, if you want a truly throwback experience, look no further than couch co-op. You can race the tracks with up to three friends and you can choose any of the game modes. So you could play all of the modes yourself and then play all of them again with your friends if you’d like.

The game also features a ghost mode and a tournament mode. Both are very self-explanatory, naturally. Both of the modes are really great for the couch co-op we just talked about. They really crank up the intensity in the room (believe me). And then there’s the Endurance mode. What good racing game doesn’t have some sort of an Endurance mode?! This mode is pretty insane, to say the least. You have to choose which car you’re going to stick with for the entirety of the endurance. It seems to populate a random number of tracks and you have to do 5th or better each time to advance.

And then there is Playground mode. This mode is currently exclusive to the XBOX One and Switch versions. If you already own the Steam or PS4 version, this mode will eventually be introduced, so don’t worry! This mode is definitely interesting as it’s basically a daily challenge sort of thing. You’ll complete the challenge as best you can and see if you can break into the top 50. You may find yourself checking in on a day where the challenge is infinite boosts, or maybe changes in weather, or mirror tracks. And apparently, they change as the months go on. That way you never tire of the challenges.

So all in all, your game has a lot of default longevity and replayability on its own. But you can always mix some friends in to kick the competition up a notch. Or maybe you can stop in for some daily challenges. No, there is no online play, maybe that will come with time. Nevertheless, having Playground mode now makes the game feel like it’s now worth its $20 price point. 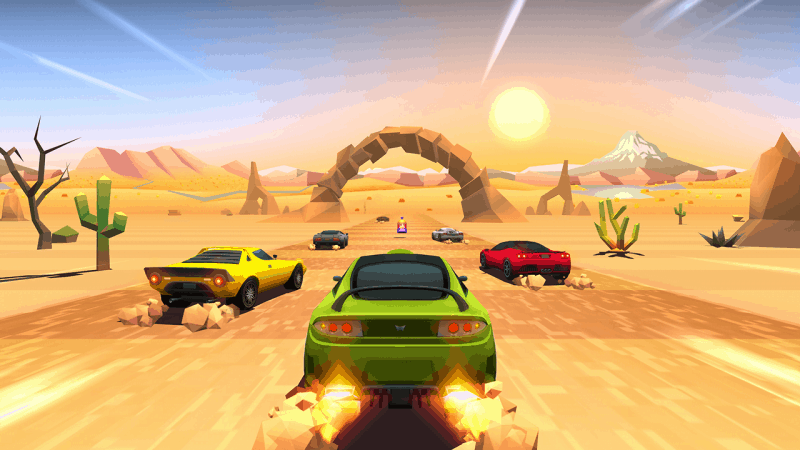 If you’re down for this game and want it for XBOX One, click here.

Need this on the go via your Switch? Click here.