As you can see all the pieces are starting to come together before FW5.50 gets released as today a POC Webkit exploit for FW 5.01 & 5.05 was released. Now, this won’t let you run anything just yet as it’s just a POC but once the community starts to work on it and see what it can do, as it might just be what FW5.05 needs to get started. Like we said before don’t update to 5.50 once it’s released if you like to run homebrew anytime soon. 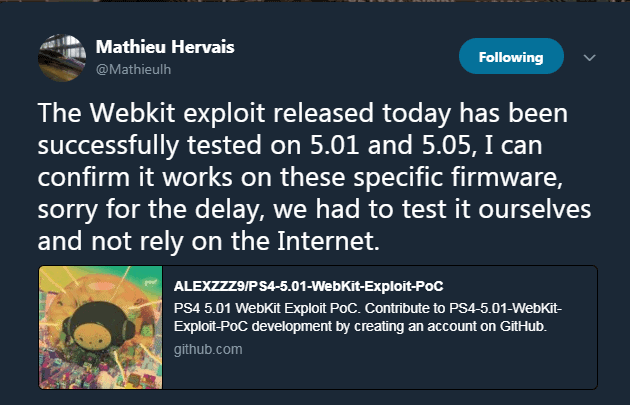 If you are on FW4.06, 4.07, or 4.55 new developments have happened, you can check them out here and it might be easier for them to get the ball rolling on those FW first but with this new POC WebKit exploit for FW5.01/5.05, we might see it become the new FW to be on soon. Below is a video from m0rph3us1987  back in December 2017 showing us that homebrew can run on FW5.01 and I’m just guessing the same would go for FW 5.05 but for right now FW4.05 is still the FW to be on. With all the new things popping up for the PS4 its best not to update and wait patiently.