Ever seen a homebrew cartridge/disc for an older system you own? Maybe it’s on a website and it usually comes with a manual and a case. They’re all over the place now for Dreamcast, Genesis, NES, SNES, Atari, there really is no limit. Well, I bet you haven’t seen any of those games get a visual overhaul and turned into an indie title for console. That’s where today’s review title comes in. Some of you may have heard of this game or seen it at a convention; it’s Coffee Crisis ($10.99, Mega Cat Studios)! Let’s see if this game is worth its weight in beans! 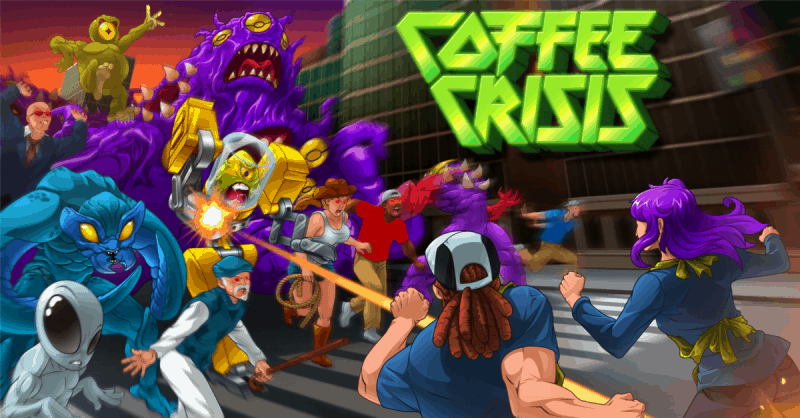 ‘FILL UP ON THIS!

A dark brew of alien invasions, heavy metal, and side-scrolling beat-em-up action on the streets of Pittsburgh!’

So the very moment that you get past the Unity screen, you get hit with a fist full of metal music! The music is fun and totally abrasive, but in a good way. The music clearly is exclusive to the modern console version of the game. I’ve never played the cart version, but I know there is no way they have electric guitars and drums with double bass pedals. I’m only guessing, but I suppose it is probably more of a robust MIDI version of the same music on the cartridge.
The rest of the game also features some bone thumping metal and it plays right into the whole alien killing vibe. I never would’ve thought to myself that a video game should feature alien murdering and metal music simultaneously. But now that I’ve played it, I realize that it’s a perfect combination and really hope that you do play it. You’ll get to feel the game as it was intended to feel.
It is a bummer the music restarts on every single screen in the main menus. It can be a little bit annoying. You do have the option to adjust the volume on the music, obviously. Or if you’d like you can turn it all of the way off (don’t do that, unless you have different metal music for a custom soundtrack). The same goes with being able to turn down the sound effects. You can also choose to turn on the alien cries, they’re off by default. I’m guessing they’re annoying so I never turned them on. But all of the other sound effects in the game keep their Genesis charm, so I left the sound effects volume on the default level. 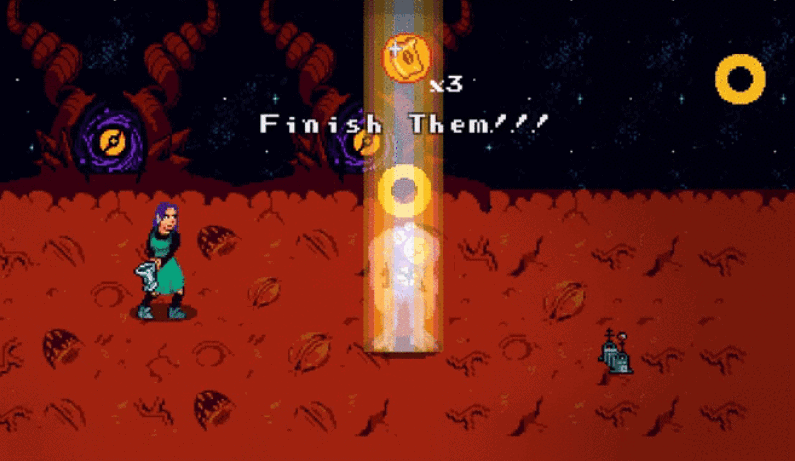 The visuals may very well be the most striking part of this game. The only reason I can confidently say this statement out loud is that they’re legit Genesis graphics! There’s none of that phony retro looking implementation here. These guys are using code that can also be compiled to run on a Sega Genesis. This has already been proven as the cartridge for Genesis and Mega Drive came out long before the XBOX One and Steam versions did.

I know that making older games for newer systems has been going on for a long time now, don’t get me wrong. But what is particularly interesting with Coffee Crisis is that there is none of that “HD” crap that other developers do. They didn’t take waste their time making 3D characters or change the world into a giant 3D landscape. They only upscaled and improved the menus as they would’ve been too muddy to use on a modern console.

All of the sprites in the game are hand drawn. I love that the main character sprites have a lot of emotion and expression. Not only in the way that their faces seem to react, but their body language as well. These sprites have a lot of movement to them and it almost seems to appear that they also have to deal with inertia. Once they swing the heavy weapon they’re using, it seems to carry through since there is so much weight and speed behind it.

I’m truly impressed with the visual details as well. The weather can change depending on the level. I thought that that was amazing, I’m not certain I’ve seen changing weather throughout a level before in a side-scrolling brawler. The enemy characters are aplenty as well. I had a hard time at first trying to figure out why I was bashing aliens and old people, but I soon figured it out. I had great fun watching an old fogey take a bag of coffee beans to the dome! 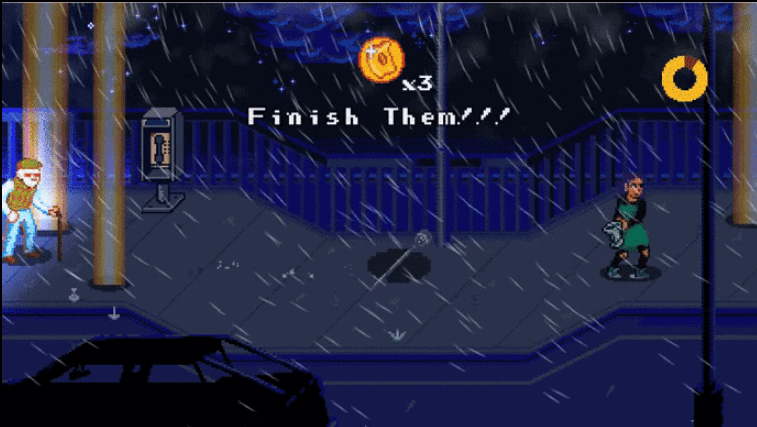 Not to “cheat” but back when this game first came out on Genesis, I read reviews on it. The only main takeaway that mattered to me was that one reviewer said that this title felt like a mix of Golden Axe, Streets of Rage, and Double Dragon. That seemed a little bit too unbelievable for me, so I didn’t get the cartridge. I thought that even if it was like those games, it would be too hard to balance the elements that make them great. So maybe the game was just a complete mess. Well, let me tell you, dear reader, this is not the case at all! I would say that they balance the best elements evenly and it makes you want to beat this game and then go re-beat those other games!

The game is a single player game for the default option. If you’re playing alone, you just choose one of the two characters, Nick or Ashely. If you’re playing the secondary co-op mode, you’ll choose who is going to play which character. Your goal is to destroy all of the Smurglians that are invading earth. They want to take all of its natural resources (coffee and metal music, of course).

Nick and Ashley won’t stand for this and set out to kick their alien faces in!There are plenty of powerups along the way. Those of which that can increase your strength or let you use a different weapon than your default one for some amount of time. It’s a true, original brawler in that sense. What they do differently is increased the number of baddies on the screen at once. I definitely felt overwhelmed at times. But if you know how to use your abilities and time everything correctly, the game is indeed beatable. 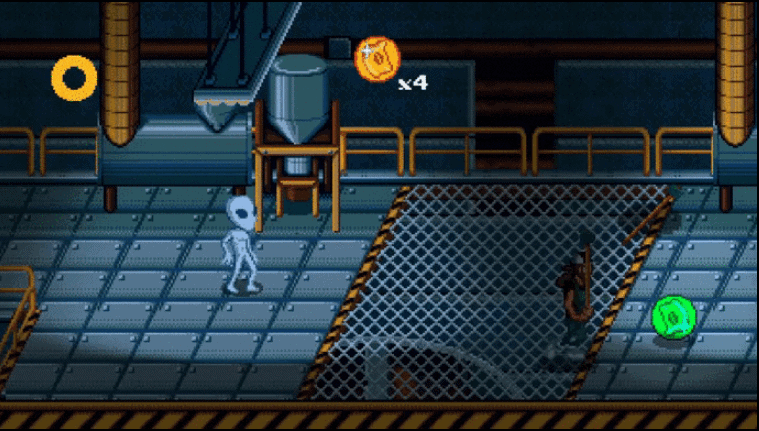 As I mentioned before, the game features multiple modes. You will see that you have the standard single-player mode. You’ll also find that there is both local couch co-op. I believe that you have to download an update as well as the game to get co-op. I don’t rightly remember doing so, but Co-Optimus says that the co-op is available in download only. So if you’re looking to get more out of this game, playing it all of the way through in single-player and then co-op doubles the game. You have to remember that this is basically an arcade game. So it’s difficult, but it’s also shorter than an 8 hour game by far!

Don’t get me wrong, the game is great fun. It’s worth playing multiple times. But if you’re a person who likes games that are overly long in the first place or that give you an entirely different experience each time, skip this one. If that’s you, don’t fret, you’re not an arcade gamer, you’re an RPG gamer. And while this game does have things like increasing your strength (albeit temporarily), you won’t find really any more RPG elements.

I might also suggest that if you want to get more out of this game, to buy every iteration of it. Both physical and digital versions of this game exist. What’s better is that their site mentions PS4 and Switch versions are being worked on. So if you are a trophy chaser, you can get it on your XBOX and PS4 and get all of the trophies and achievements. 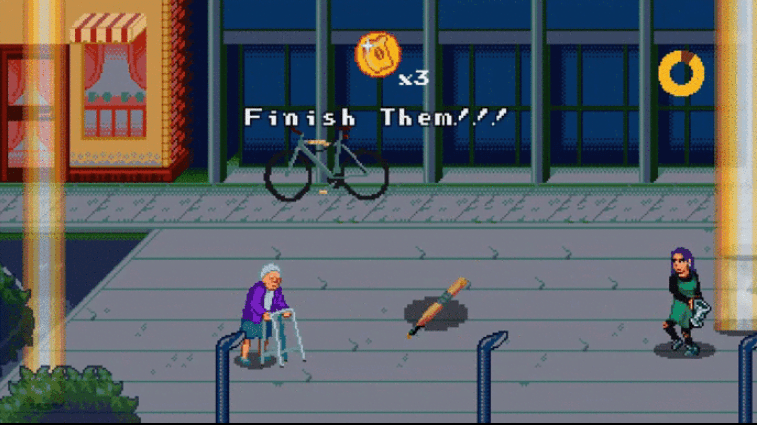