Yep, you read that title right. Thanks to a few findings that if a certain Button Combination is held at 3DS Startup it will boot from the NTR card slot which theoretically allows us to unbrick any and every 3DS. But something like that would never happen, right? Well… This is where the 3DS Scene continues to amaze me every time. They manage to crack the whole console apart so damn hard that there is pretty much nothing left on it anymore. 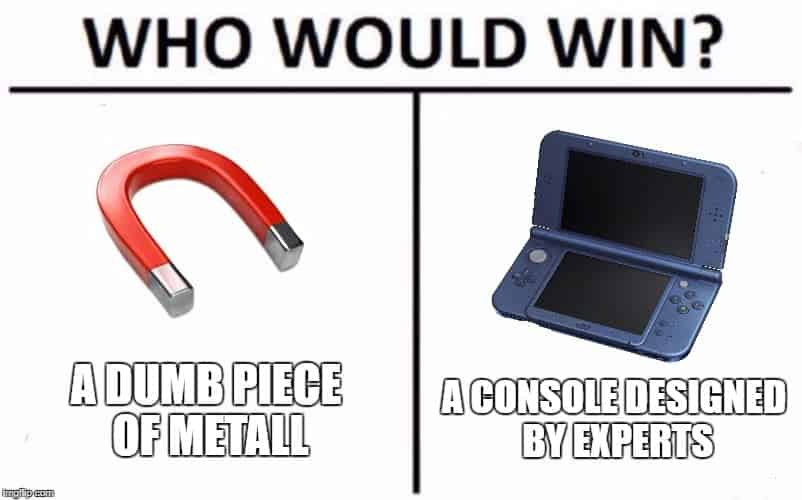 While exploiting the Bootrom it was found out that the Bootrom checks if Start+Select+X is held down and if the shell is closed. If these requirements are met, it will boot, straight from the bootrom, an NDS cartridge. This gives those cards bootrom access. But where does the magnet come into this? Well, you can’t really press Start+Select+X if the lid is closed so if you put a magnet on a specific position on your 3DS the 3DS will go to sleep mode.

This allows you to press the button combination at boot up. Together with sighax this allows us to create NTR Cards that can automatically install SigHax to every console without an hardmod which in return will give us the ability to reinstall the complete system and fix bricks. This is pretty much like the good old Pandora Battery from the PSP with the difference that the Pandora battery only worked on first and second Gen PSPs whereas this works on every freaking 3DS released up till now. Here is a POC Video by SciresM which shows the unbricking process in action:

All credit for the firmware image for the flashcard SciresM used goes to Normmatt.
SciresM also mentions that “this will be released as soon as more types of flashcards are supported + installers work well — don’t want to get everyone to buy a single expensive type of flashcard if it can be made to work on lots of them.” This means that you will need a flashcard that where the bootloader can be reflashed just like with an AK2i and a DSTwo but let’s hope that some other cards may also be able to get this done. I don’t think that any of the R4 Cards and clones will be able to do this though so if you own one of them you should maybe be prepared to buy another flashcard. This is all speculation for now though until it will be confirmed officially so don’t run around wasting your Money on Flashcards now until you know which Flashcard you’ll actually need.

If you want a bit more of information about this you should read SciresM presentation about the Bootrom Exploit.