Like it’s immediate predecessor that came out in March of 2015, Tokyo Twilight Ghost Hunters: Daybreak Special Gigs is Toybox’s premier franchise about, well, ghost hunting.  I think when people hear that, their minds go to an all too familiar place; Ghostbusters.  But this game is absolutely nothing like that.  You’ll find that, by reading this review, you’ll see that it’s flashier and even more robust than just waving some streams of light in the general direction at a ghost.  This game is a newer iteration than the version that came out 2 years ago.  In the same vein as games like Persona 4 that lead to Persona 4: Golden or Kingdom Hearts and Kingdom Hearts: Final Mix, this newer iteration has more items, modes, and overall more features.  Let’s dive in! 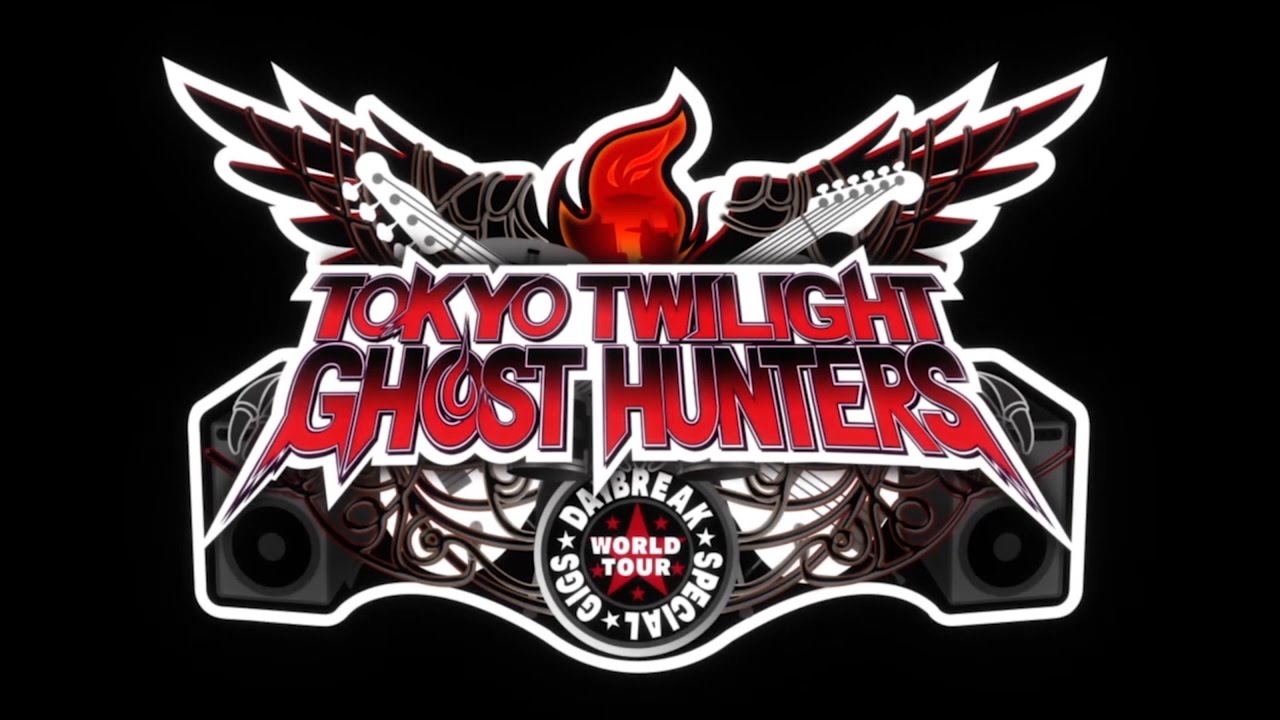 I’m not going to have this review only talk about the new things that this game brings to the table that the other game did not.  That would be dwelling too much on the past.  Instead, I’ll mention right now the features and then we can talk more about the pros and cons of the game.  If you google, which all of you can (I believe in you), you’ll see that Toybox has added a more expansive story.  It isn’t just longer, but it branches more as you go on.  In addition to the current modes of the old game, there is a new ‘Daybreak’ scenario.  Last, of all, there is an improved battle system.  Now again, since I had not played the previous version in which this aimed to improve on, I will only be judging the game as if the other did not exist.

This was my first visual novel game.  When I first had heard that term, before starting the game, I thought that meant something akin to watching a storyboarded movie unfold.  But it’s so much more than that.  It’s probably closer to actually participating in an anime TV series.  You have a cold open section of the game, in which (without spoiling too much) you are a new kid to the Kurenai Academy in Shinjuku, it being your very first day.  You conveniently meet the 3 characters (depicted below) in which you will be sharing the rest of the opening with.

It leads up to all 3 characters feeling entirely separate ways about you.  This leads to a more dynamic storyline later, but I appreciate that the writers at Toybox gave this dynamic considering that the way you reply to the other characters in the story is by using a 2 reply wheel system. One wheel lets you choose a happy face, sad face, confused face, handshake, or an angry face while the other wheel lets you choose one of the five human senses.  With the 2 wheel choices combined, you can sometimes get a delightful response.  But no matter which you pick, none, unfortunately, appear to drive the story line forward.  The character that you’re speaking too seems to reply to your motion and then carries on how they would’ve.  Toybox claims that this can dynamically affect the story, but if so, I simply wasn’t seeing it.

This opening continues onto you being recruited in a one-off ghost hunt.  After finally defeating that ghost, it leads into more dialogue where you discover that they call themselves the Gate Keepers and want to officially have you on board.  This is where the game truly starts to come into it’s own because following that you getting an opening sequence like in an anime!  This is where the game really hits the mark.  As I stated before, I hadn’t played a visual novel before, but this has fast-paced dialogue (which you can turn up to the highest speed in the settings like I did), it has relatable characters, it has a sense of intrigue with the ghost aspects, and it has a very sense great sense of beauty.  They went with an aesthetic that had a sense of realism.  They have actually photographed pictures of the actual locations and added a bit of filter and it just gave this sense of realism, but also it appeared drawn.  With the characters drawn to overlay in these locations, it was truly a treat to me in this world of 3D games or pixel themed 2D games. 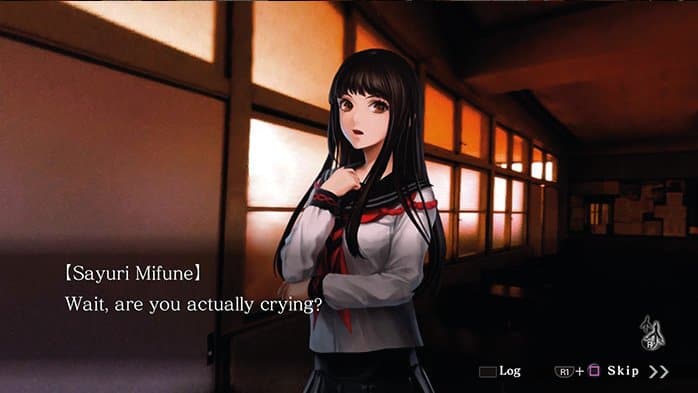 My main gripe may just be with the gameplay itself.  The story is suspenseful and fun and you feel like you are genuinely part of the team.  But I just became so hung up on the actual gameplay.  It’s not as if the game doesn’t tell you how to play or that it just assumes that you already know how to played, but it doesn’t exactly hold your hand either.  At its core gameplay, you get super pumped to take down ghosts and then the gameplay actually starts.  I feel like I could explain this better.  You have a scene with characters standing around discussing their plan and tense music playing and a ghost presents itself or maybe the threat is sensed and then…you get a top down strategy game.  And in this regard, they don’t give you much to go on.  The first battle, where you’re recruited to help, they just say, here is the device, now use it!  Seriously, I think the only way to accurately explain it was if I were to call it Battleship.  Or maybe Marco Polo. If you look at the picture just above, you will see what I mean.  Each colored arrow, for example, is a character in the room.  You have almost a turn based style game where you choose each character, give them a number of spaces of movement, and then decide if they will attack or wait until the next turn.  And then you wait for the main ghost to move and see if you guessed the correct location and the right movement.  You could block him off, but if you do not have an attack ready, then you will simply stand there and hope that he doesn’t move far by the next turn.  If the ghost and you collide, though, you will be the one who is struck.  They time the whole thing as well, so after every turn, you lose a minute off of the overall time.  This drives gameplay forward and forces you not to stay in one place for too long.  You also have obstacles in your way, so you can accidentally destroy furniture that the school paid for with its own money.  In the first fight of the game, you do not have to worry too much about that, but later, once you’ve joined the Gate Keepers, you will have that money deducted out of your budget. 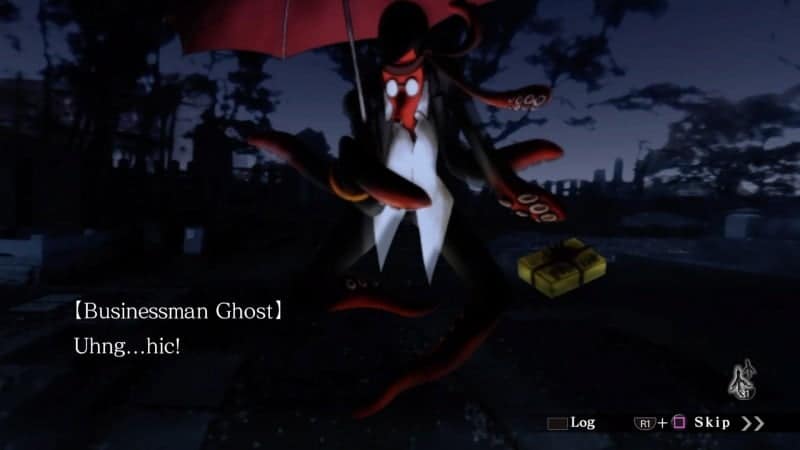 Now, there are other ways to supplement the gameplay.  If you get good at the game, you’ll start to realize that you can use the money on products at the shop such as traps or some anti-ghost tools and then you can place them all on the board.  These will assist you in diverting the ghost the direction that you want and ultimately get your time down to a minimum in catching the ghost.  This game is still quite challenging, but not in a deterring fashion.  It has just the right level of a puzzle to it, it’s as if you are playing chess with a ghost.  Not to mention the fact that there are smaller, less aggressive ghosts sprinkled about each play board.

I would very much recommend this game to the anime fans, to the puzzle solvers, to the lovers of all things creepy-crawly.  I would say that the only group of people that I would not recommend this to are those of you who played and completed the original.  I dare say that there isn’t enough to bring you back to this world unless the lower Steam price point tickles your fancy.  Take a gander at the new trailer for the Steam release of the game.  I think you’ll be as intrigued as I was.

If you want this game for PS4, click here.

If you want this game for PS Vita, click here.