RPG Bucket list: 5 Games You Need To Play Before You Die

Hello all! Riddle43 here with what I feel are the 5 RPG’s you should play before you die. Now i know what you’re thinking, damn that’s kind of morbid! However, sometimes life does not last as long as we all would like and some of us miss out on many things and places.

This got me thinking that if I were to have 5 RPG’s that I would want to sit down and play before that inevitable day were to come what would they be and why so this list is just that.

Now, please keep in mind that this in my opinion to what i feel are 5 must not miss games and I encourage you to let me know how you feel in the comments because I feel we all have our favorites but this is my list so sit back and enjoy.

Crystalis
Publisher SNK
Release NES 1990 / GBC 2000
Crystalis is a wonderful game that was not a big hit when it was released but has since become a cult classic. The game begins with a man’s awakening from a cryogenic sleep one hundred years after a global nuclear war.
Even though he is unable to recall his name or who he was, he begins to discover that he may be the key to save this world from destruction. Now this game has many fond memories for me of long nights running around to get money to buy better items and weapons and loving the way the game flowed and I enjoyed it to the fullest.
The game’s initial success prompted a release for the Game Boy Color by Nintendo Software Technology in 2000, which is generally considered more of a remake than a simple port.
Many changes were made to the story, music and other aspects of the game, upsetting fans of the original.
I, for one, still play this whenever i get the urge for some 8 bit RPG joy.

Chrono Trigger
Publisher Squaresoft (Square at the time the SNES ver was released)
Release SNES 1995 / PlayStation 2001 / Nintendo DS 2008 / Android 2011
With amazing music, active battle system, time travel and a frog, this game has it all. Chrono Trigger is, and always will be, a fond spot in my mind of days gone by and that joy I felt running around, saving the day and time itself.
The game’s backgrounds are beautiful, and every character and monster in the game is a large, fully animated and well drawn sprite even by today’s standards. Chrono Trigger features one of the best and most memorable soundtracks of any RPG that I have ever played thanks to famed composer Yasunori Mitsuda.
This game also does random encounters in a different way, where in the monsters wander about and sometimes even start chasing after you.
The story is also a wonderful tale where the player must hop back and forth through time in order to stop various crises. This adds quite a bit of depth to some of the game’s side quests and allows for a very different kind of story.

Wild Arms 3
Developer / Media.Vision
Publisher / Sony Computer Entertainment
Release 2002 PlayStation 2
Wild Arms 3 is at its best right off at the start when we are first introduced to the characters. All use special weapons called arms…we have a six-gun shooting female who is the leader, a sort of machine gun toting youth, a sniper rifle professor type, and an Indian with a double barrel shotgun, all this in a wild west theme with a touch of a futuristic twist.
You have your basic gathering of elementals, going into town, exploring dungeons, aspects of the game which are basics in most role playing games. The fighting is also a bit different, but only in the fact you must periodically reload and, depending on the character’s weapon, this may take anywhere from 2 to 6 or more turns. You will also ride horses in the game and actually fight while on the horses in this one too.
The story is solid with recurring villains; mainly a cowboy villain whose team you take on right at the beginning and a group of mysterious priest like people who have a secret.
I can’t tell you how long I spent playing this when it was first released and still pick it up from time to time and I think you should as well if you havent had a chance to. 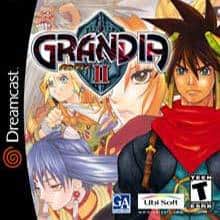 Grandia II
Developer / Game Arts
Publisher / Game Arts
Release 2000 Dreamcast / 2002 PlayStation 2 / 2002 Microsoft Windows
Grandia II was the first RPG i played on the Dreamcast and i fell in love instantly. That love is still there today. The game was one of the first games I ever played that had a main story that was voiced by the main characters as you played through it.

Grandia II has a unique battle system. Apart from running its turn-based battle system in real time the game supports limited movement during battle. Characters can run around or strike opponents and then retreat. Dependent on the timing, a playable character or enemy can “cancel” an opponent’s move. The battle system uses Initiative Points, Magic Points, Hit Points and Special Points. A combo attack allows a character to land two hits on an enemy.

The game’s story revolves around Ryudo a Geohound (a mercenary) and his trusty bird companion. They are hired by the Church of Granas to escort Elena, a songstress of Granas, to Garmia tower for a ceremony. Upon arrival, Ryudo is asked to wait while they perform the ritual. However, Ryudo hears a scream and rushes up to the top floor.

Seeing everyone dead and evil magic, Ryudo rescues Elena and heads back to Carbo village. Back in the village, Ryudo is chastised for his intervention before asked to escort Elena to St Heim Papal State to meet Pope Zera. Before he can say no, the village is attacked by a mysterious woman who engages and defeats Ryudo in battle.

Now, I don’t want to give away more of the story but it’s an awesome game that keeps you wanting to play forward just to find out what happens next and I highly recommend you do.

Skies of Arcadia
Developer / Overworks
Publisher / Sega
Release 2000 Dreamcast / 2002 GameCube
Have you ever wanted to be a pirate? How bout an Air Pirate? Well now is you chance with Skies of Arcadia!! The game’s story focuses around Vyse, a young pirate in a Jules Verne-inspired fantasy world, and his friends as they attempt to stop the Valuan Empire from reviving ancient weapons with the potential to destroy the world.

Game play in Skies of Arcadia primlary takes place in dungeons. Controlling the hero, Vyse, from a third-person view, players must traverse and complete these dungeons to advance the storyline. A dungeon is a network of pathways with treasure chests, puzzles and monsters appearing radomly.

Completing the dungeons is usually a matter of exploring each of the pathways set in front of the player until the correct one is found. Treasure chests are commonplace and contain some of the most powerful items in the game.
Throughout the dungeon gameplay players meet compulsory random encounters. If the entire player party is defeated, progress is reset to the beginning of the dungeon.

Now this game is a blast and fun to play and for its time coming out on the Dreamcast it made fun use of the VMU with a mini-RPG called Pinta Quest. The game can be downloaded after the player reaches Sailor’s Isle and talks to Pinta, a boy who expresses a wish to sail all over the world and discover things.

The game also had Ship combat and was used when battling other ships and the extremely powerful gigas that are summoned throughout the game. Ship combat follows the same framework as character combat, with a few distinct differences. Each round in ship combat is divided into either three or four turns depending on how many characters are currently in the party.
Well there you have it but before you go I would like to share a few honorable mentions.

Breath of Fire III , Pokémon Yellow, kingdom hearts and, one of my all time favorites, Final Fanstay 7 but i will save that for another time.

I hope you had as good of a time on this strange little trip as I have and I hope to see some good comments down below.

And as always you can find me on twitter @riddle43 and have a wonderful day.