The season of RPG continues! This time, the entry is part of the beloved Neptune franchise. Welcome to Superdimension Neptune VS Sega Hard Girls and welcome to the Grand Library where all of the world’s history is cataloged. However, mysterious things are afoot. Can you discover what is going on to save time and history itself? Is this adventure worth your time? Read on and find out. 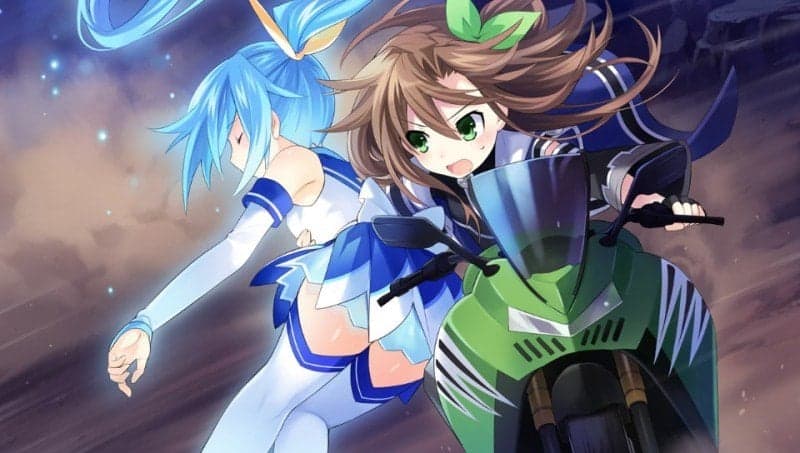 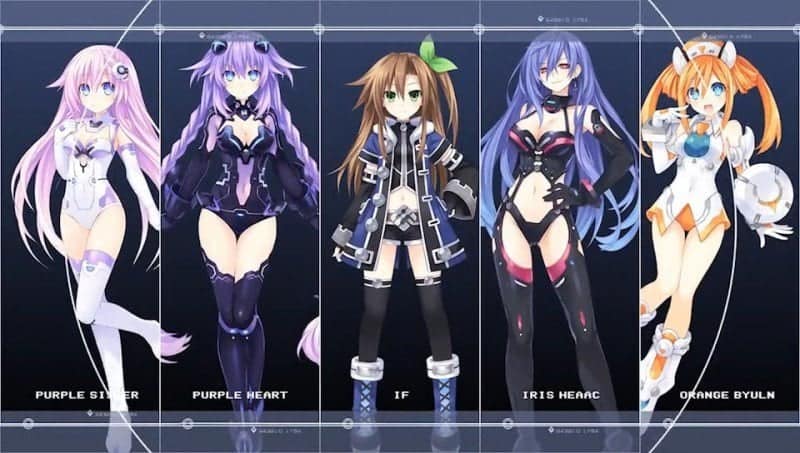 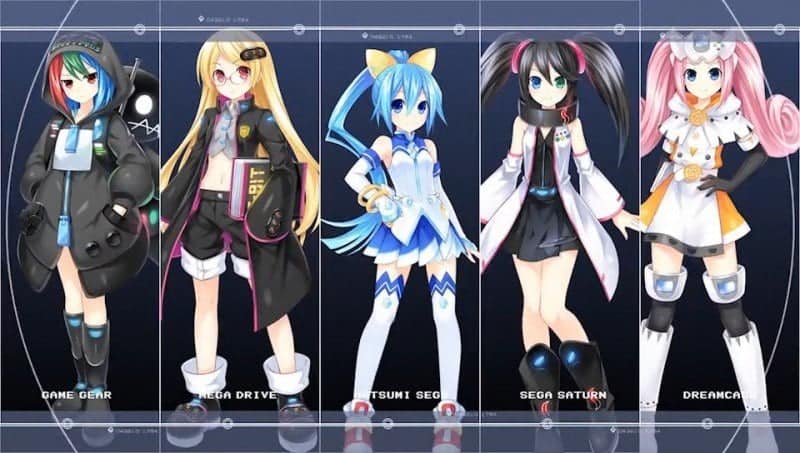 To start, this is a side story to the Neptune Franchise. However, do not discredit this game immediately because of this. I can assure you this RPG is an adventure worth taking, especially if you are a Neptune fan. The official story is as follows:

“A grand library that administers all of the world’s history.

They say that the history books in this library have the power to actually rewrite the history of the world.

After a long journey, IF steps foot into the grand library with a certain objective in mind.

However, at the same time, something happens in the library that has been making the history books disappear left and right.

The books’ disappearance means the actual loss of history. As history disappears before her own eyes… so does the world.

In order to correct these wrongs, IF begins her adventure on a journey that goes beyond space-time.”

The game involves time traveling to fix what when wrong with time and history. You travel to several different eras to fix what is going on and ultimately discover the mystery behind all of this.

My take: It tells a grand story in typical Neptune fashion. I enjoyed my time with the story, which is delivered in the Neptune humor and fashion. It is delivered well. However, this was previously done in some fashion in the Neptune games, so the story is not really that new. Regardless, it still delivers in the context it is given for the side story of IF. 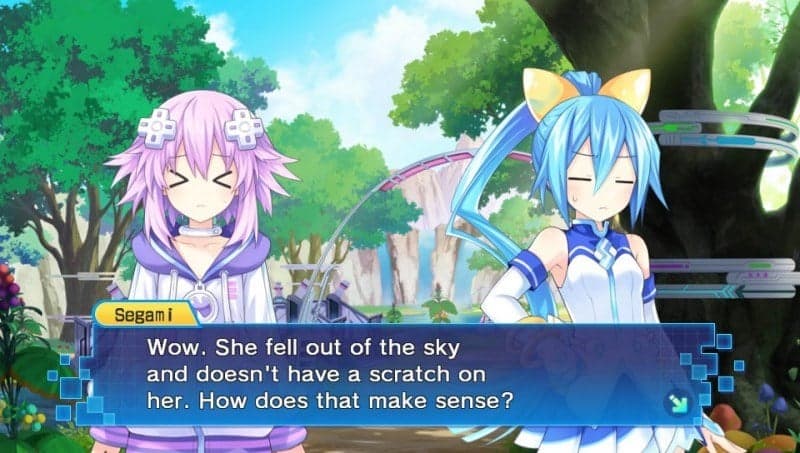 If you are new to the Neptune franchise, the gameplay mostly follows the same format. You have a hub world, from there you decide where to go next or explore the hub world. Not much exploration in these worlds is to be had. Everything is from top-down animated view and optional dialogue only occurs at certain times. Outside of the hub world, you travel to other time eras/worlds. 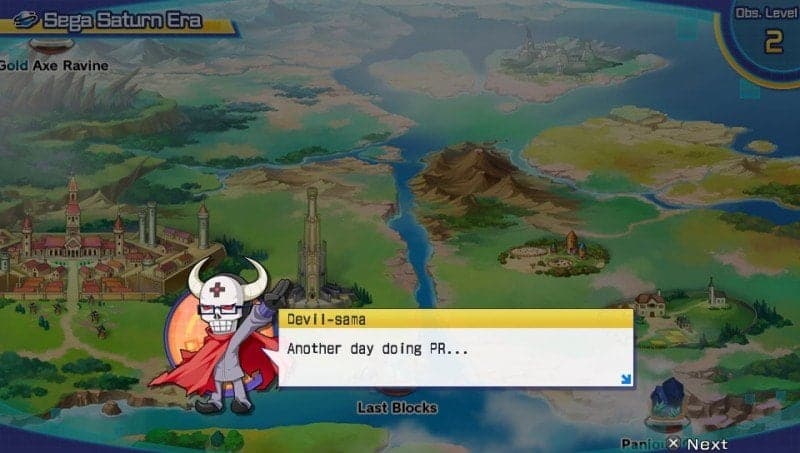 You get an optional conversation on the world maps in this area, in addition to exploring dungeons on the map. In the dungeons, you find items, fight enemies, progress story, and fight bosses. It is a standard RPG and works well in this format. It is the format for nearly all Neptune games (outside Action U, Goddess Black heart, and MegaTagmension) and has worked for every game up to this point. I see no point from deviating from something that has worked so successfully up to this point. 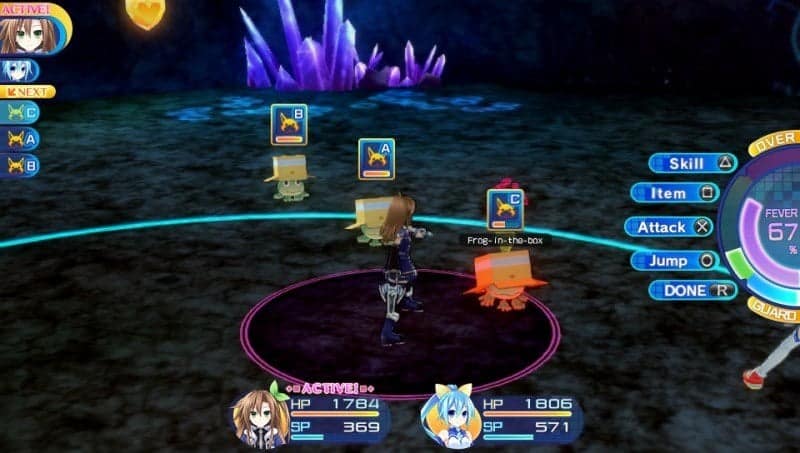 Combat is turn based as past Neptune games. However, this time around, you have the order progression coming up, some which do not make sense. If you do more moves within combat, when it comes to attacking once again the order shifts. This can be in your favor or not in your favor as you have to wait until the enemies attack several times before you attack again, which could possibly end you depending on how strong the opponents are. This was a different take on things from past game, which I liked and didn’t like. 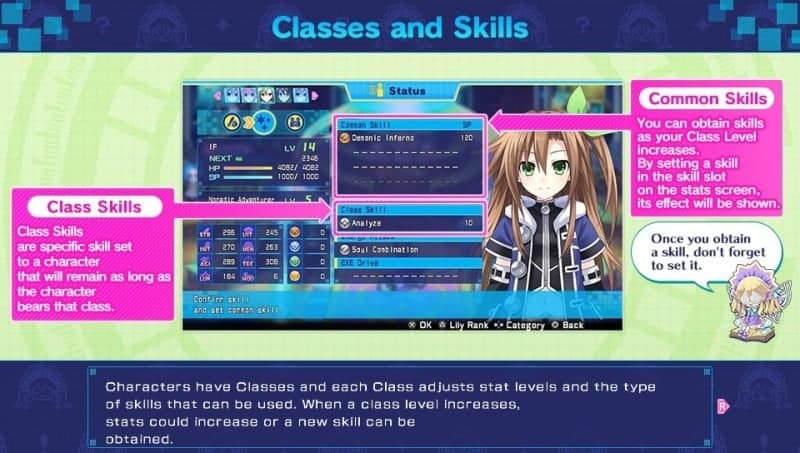 One new element in gameplay (introduced later on) is the addition of classes to your character and the ability to switch classes. Each character has multiple classes, which you can change from the Grand Library hub. Some classes have advantages over others, so it is wise to consider all your options before choosing a class. 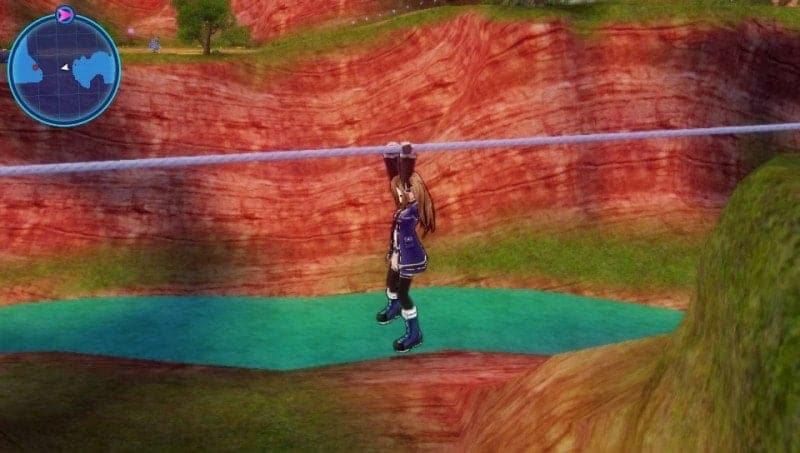 Another new thing in this game is the ability to get to the ending when you want. Once you discover the cause of everything, you can choose to get to the end fight right there. The game has a time element built into is that incorporates this. You can get multiple endings based on this. 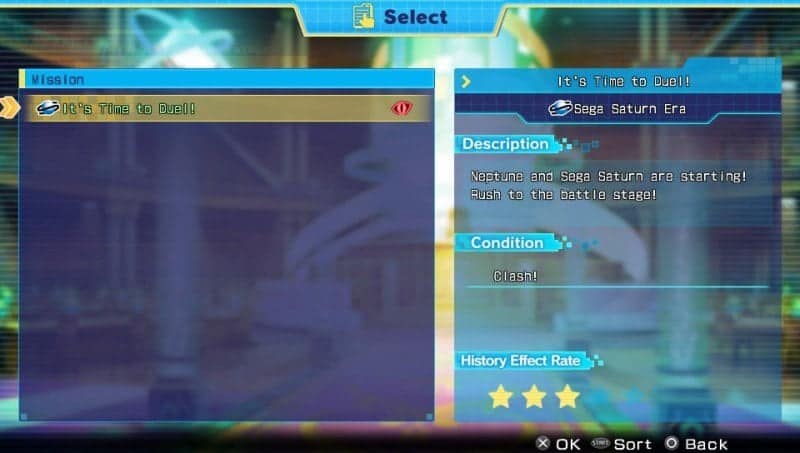 My take: As a Neptune franchise fan, I liked the gameplay and it was interesting and refreshing to do all this from IF’s perspective. Same gameplay from the past with new elements sprinkled into the gameplay. It works well. However, I had major gripes with the new elements added to the battle system. Mainly the new component if you attack multiple times, it could very well delay your turn when it comes to attacking again. It is frustrating to see when you are fighting 4-6 enemies at one time where they just come at you and attack you multiple times before you even get a turn. I had the game over happen times due to this. Regardless, outside of this battle component, the gameplay is typical Neptune which I adore.

When it comes down to the soundtrack and overall audio, Superdimension Neptune Vs Sega Hard Girls delivers.

The soundtrack of the game is fantastic and has songs that set for every occasion in the game. The voice acting gives you options. You have English or Japanese Voiceovers with English subtitles. Overall it works for this game and fits with the theme of the game. 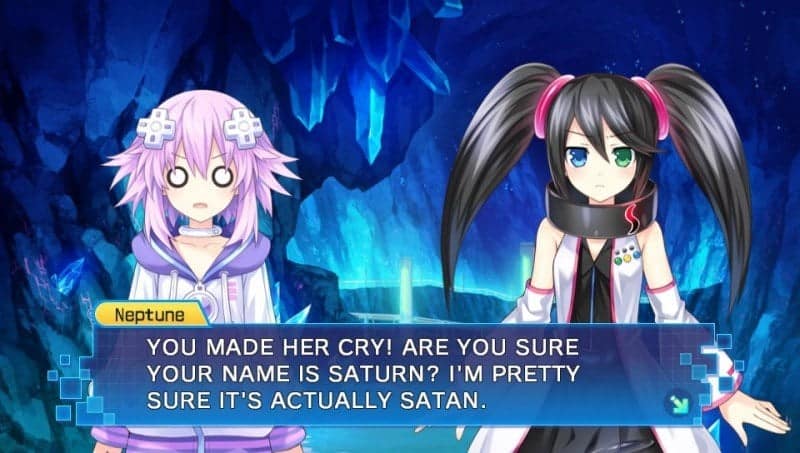 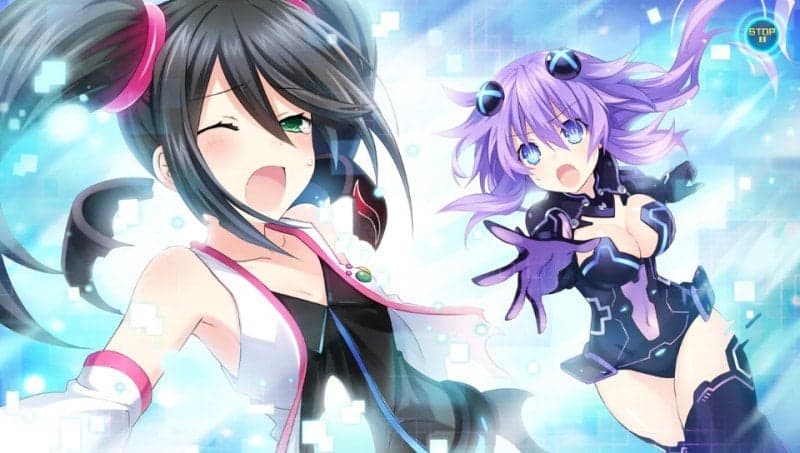 Visually, the game looks very animated just like previous Neptune games. The overworld hub is drawn as anime, the characters have expressions which are animated when they speak their lips move and the lip syncs with it. There are some animated scenes as well in the game, which all and all works out for this game. With each new Neptune game, the visuals slightly improve. This is a good thing in my opinion. Everything wraps up in this nice package visually and fits with the Neptune franchise just well. 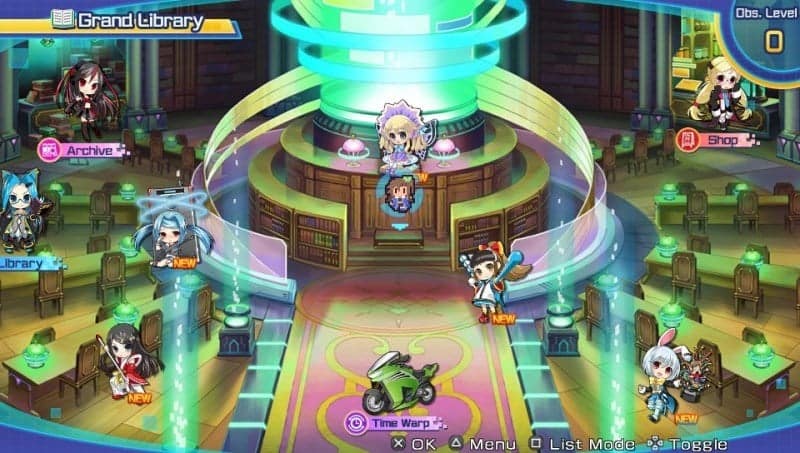 The game has three endings, and a few things to unlock. It has had a ton of missions to do and a ton of sidequests to accomplish. The replay factor is there if you desire it. 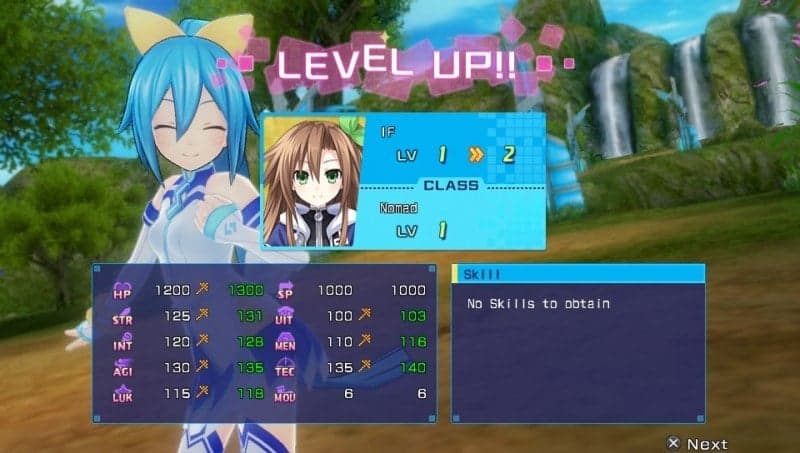 Is the game fun? Well after clocking nearly 70 + hours and unlocking everything in this game, I would say it is. There is much to do and the game does it in the Neptune fashion. The developers went the extra mile with this. However, it can get very wary as if you do not do this in moderation, it can cause you to struggle quite a bit and possibly put the game on the backburner. Take your time, enjoy the humor and goodness the game has to offer. 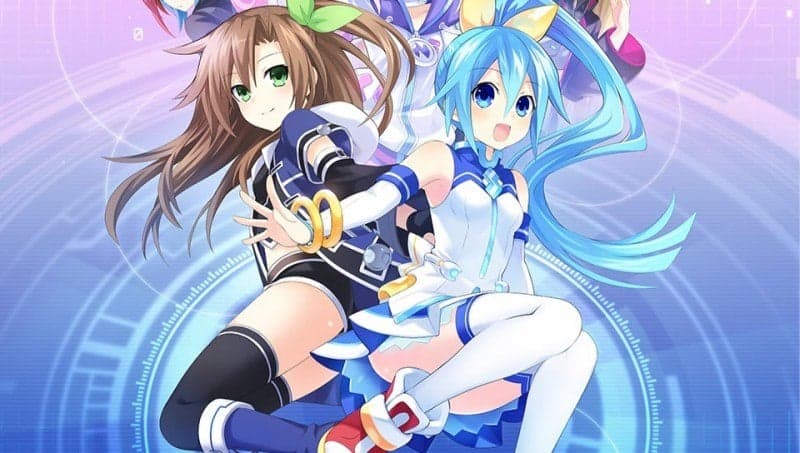 After spending the time I did on this game, Superdimension Neptune vs Sega Hard Girls is a fun game and welcome addition to the franchise. Playing from the perspective of IF is fun. In addition, everything done in the game is done well. With the few gripes I have with this game, I would still recommend this game to anyone seeking a good RPG to play, especially for their Vita. The game came out just today as of this writing and I do hope people give it a go. IFI and the Developers always pour their all into these games, and it definitely shows.

Superdimension Neptune VS Sega Hard Girls is a welcome addition to the Vita as well as to the Season of RPGs. Stay tuned for the next entry which should be hitting very soon. Til then, Mgs2master2 out!

A gamer and jack of all trades. I enjoy many things, but overall just enjoying life. Hopefully, I can add enjoyment to your life through my articles or interactions.
@mgs2master2
Previous Making custom themes for the PSVita just got easier!
Next rinCheat updated to stable version!!!