It’s been a bit of time since we witnessed the great rise of Guitar Hero and Rock Band. Guitar Hero probably, between the two, was the one that has received more interest and has attracted the most attention on the music scene. Van Halen got their own edition of Guitar Hero, with the best songs of Van Halen, less those with Sammy Hagar. But after the first success, the market began to gradually deflate (perhaps the most impressive was Guitar Hero: Aerosmith, which has sold more than 3.6 million copies) and Guitar Hero: Warriors of Rock in 2010 marked the end of an era.

We were saturated. We’ve had enough. So it’s all over. But five years later, we find ourselves once again with a new guitar in our hands, a new game, and a brand new concept. Freestyle Games, had the daunting task of reinventing what once was a giant game worth billions of dollars, and the idea that they had been very different from the past. If the original creators of Guitar Hero, Harmonix, were stuck on the same concept of starting with Rock Band 4, Guitar Hero Live takes a lot of new opportunities. It is innovative, yet familiar.

But first things first. The new controller for Guitar Hero offers a great novelty with the new six keys. There is a line of white buttons, a line of blacks buttons and these combine to form the 10 different notes (three black, three white, three black and white, and the strum bar). It is more complex than previous titles, but also offers greater accessibility since the first two levels of difficulty will not use buttons blacks. In fact, the easiest difficulty uses only the strum bar. It was so boring that we could not tolerate more than half of a song. On normal difficulty, you use all the notes but you are not required to use all the buttons, an aspect that both advanced and experts tend to do. It is an interesting configuration that allows our small finger to go on holiday (unfortunately for me because I’m a guitar player and used to use it), while the three fingers are forced to work hard.

Guitar Hero Live is based primarily on two methods. The first person mode, where you play through the most intimate concert to the gigantic festivals and Live TV in which we are accompanied by original music videos. First impressions are good to live. Let’s start with the festival Sound Dial with “Stoneford Castle” in the UK, as the “Portland Cloud Orchestra”.

It’s fun and the atmosphere in the first person works much better than we expected. Especially when things are not going your way, and the boos of the crowd and looks furious fellow band begin to weigh on us like boulders. It ‘s great (no, really it is). We honestly can not remember even a single frame animations or any other previous Guitar Hero or Rock Band as those seen in this new game. It ‘also an aspect that makes the game more fun for the audience in the living room. The developers had fun and indulged themselves with this aspect, they played with the stereotypes. As soon as you start to mess up, it’s easy to see how the public and fellow change from version “good” version of the “bad”. Chances are you will end up hating some of these bands invented and you end up loving many others. The same applies to the tracklist.

The Live section of the game has 13 sets, with a total of 10 bands for two festivals (there is also the American Rock the Block, in addition to Dial Sound). Each set consists of at least 3 songs, some up to a maximum of 5. There is a set with Avril Lavigne, Katy Perry and Rhianna (…). And one with Kasabian, Linkin Park, Eminem and Skrillex. There’s a little for all tastes, but it still offers a consistent experience for any fan of Guitar Hero. This game does not really have a central theme, and then ends up being a little of everything.

The tracklist isn’t oriented to the metal, although it must be said that there are nice songs, particularly in the TV section. At launch there are more than 250 songs available, but of course the vast majority of these are streamed (there are just over 40 tracks on the disc). The surprising number of rock bands in the game also has some songs that are in turn unexpected – the Red Hot Chili Peppers with “Higher Ground”, Alice in Chains with “Stones”, and Pearl Jam with “Sirens”. If we must be honest, it’s just those songs that we would expect to play with those bands.

But also Cochise Audioslave. There are passages of the Arctic Monkeys, Green Day, REM, Rush, Queen, Soundgarden, The Dandy Warhols, The White Stripes, to name a few. And there are some classics from the likes of Pat Benatar, Judas Priest, Iggy Pop and Blondie. In short, you will find bread for your teeth in abundance.

The section offers two TV channels similar to MTV how it was before the reality show era. The songs are broadcast 24 hours a day in different blocks and just tune in and start playing to earn credits and level up. You can then unlock new hero powers to use in the TV section, new tracks, and player cards. You can also access all these songs on demand, but cost of claims and although there are a lot of credits to spend in the initial stage, we still feel that the introduction of this type of economy goes against the idea “play the songs you like in any time”. It is not the ideal solution. There are also premium television content. It’s a strange way to label this content, since there is not a requirement of registration, but the idea is that content is available for a limited period and offers extra bonus. Currently there is a live set with Avenged Sevenfold, some “classics Guitar Hero” and “blockbuster indie rock” (All the Rage Back Home Interpol is one of the songs featured, for example); you can unlock them by playing some songs (you can also safely buy them, but it’s really simple unlock them, at a level of difficulty to choose from). We’re not sure if the next content will be offered only in this way or whether there will be more songs on TV. As it stands, the TV section offers a lot of promise, but it remains to be seen how Activision manages to entice players with new content and how much they will be enticed. If they lose interest after a couple of months, we will have a selection of songs-date to which we can not access with total freedom (since there is an economic system in the game), or worse, if the selection is reduced over time. We have no way to know for sure.

Of course all of this has to do with licensing fees. Streaming content of the game is a way for Activision to offer a list of songs at no extra charge. These licensing issues also mean that we have no way to use the various features and streaming share. Guitar Hero Live caters primarily to a guitar solo, while Rock Band 4 is aimed at people who like to play together at parties. Of course you can play with two guitars and add a microphone, but the fact that Guitar Hero Live talk mainly to the solo player is evident from the fact that the “party pass”, useful to unlock the entire catalog for 24 hours, requires microtransactions . That’s right, if you’re at a party and you just want to play, you’ll need you or your friends use their credits. The songs in the Live section are accessible through quick play and do not fall under the same economy. In addition to this, there is a place where you select all the songs on the disc. The songs are songs or Live TV. In short, if you want to play along with other friends, forget it. 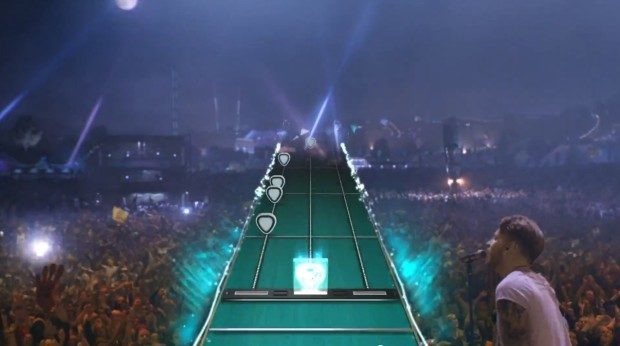 Guitar Hero is still very fun, more than we remembered. The new guitar works really well, and you feel it is a quality product, even if the click-clack of the strum bar is very strong. There are a lot of songs, some are actually very good and the set first-person is not a gimmick, but actually adds something extra.

The lack of training mode in which we can learn the most difficult riffs is another aspect that has not left us positive. If you are new to this kind of games, we would say that Guitar Hero Live is a better choice than Rock Band 4, simply because it offers more songs and a more modern concept but honestly Avril Lavigne, Katy Perry and Skrillex are in the wrong game for me.

It’s all for today! Stay tuned on my Twitter @roccocannale for more contents

I dig the web to find always fresh news about the tech world, from gaming to smartphones through pc and reviews. I've grown with bread and videogames since the first time I saw one.
Previous Senran Kagura producer leads Valkyrie Drive: Bhikkhuni a new PSVita title
Next Personalize your PS4 and more!