The developer of AetherSX2, a PS2 emulator calls it quits due to a toxic community..

Gaming communities, for the most part, are great but over the years that has changed so much due to online multiplayer, streaming, competitive tournaments, and more. Now they are filled with a lot of toxicity, entitlement, hate speeches, verbal abuse, and even doxxing. Thanks to this toxicity we will probably lose yet another great developer. AetherSX2 is an awesome PS2 emulator for Android that lets you enjoy hundreds and hundreds of PS2 games, anytime and anywhere.

Since developer Tahlret took on the PS2 emulator project he has been getting non-stop verbal abuse and the latest is death threats. Now that is just uncalled for as people need to chill out. For Tahlret that was the last straw and has decided to cease any further development on the PS2 emulator. I can’t blame him as people take this stuff way too seriously and if they can’t get their way resort to drastic measures. Hoping it will force that person into fixing their problem. 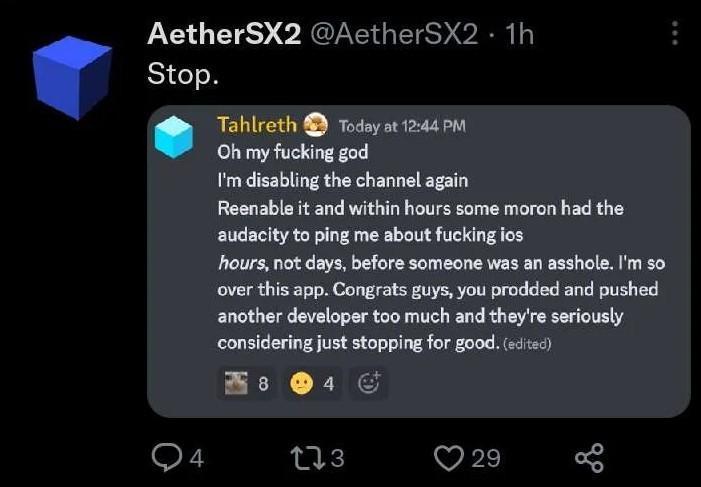 In my opinion, that kind of behavior reminds me of a cranky toddler not getting his way and saying anything he can to get you to do what they want. Well as you can see that doesn’t work and deterrent anyone else from picking up the project knowing he will have to deal with that type of community. Hope this shows the gaming communities that you catch more flies with honey than you do with shit. So he has every right to put it behind a paywall or just shut it all down as no one should have to deal with that kind of harassment.

“Due to neverending impersonating, complaints, demands, and now death threats, I’m done. You can still download/use the app and it will continue to work for the foreseeable future. AetherSX2 was always meant to be a fun hobby for me, not profit-driven. It doesn’t make sense to continue working on a hobby that isn’t fun anymore. Stay safe out there, and watch out for scammers, there seem to be a lot of them.

(e.g. there are multiple people claiming to represent AetherSX2 on various social media – they are not legit)

Thanks to everyone who wasn’t a dick for the last year.”