One of the coolest items in the box of retro goodness I got from RetroSix was a restored GBA. You may think, “Oh…so it’s just a refurbished GBA.” But you’d be the furthest from the truth. We’re going to look at this Game Boy Advance from the inside out. There’s a lot to cover this time around, so buckle up. We’re going back in time! 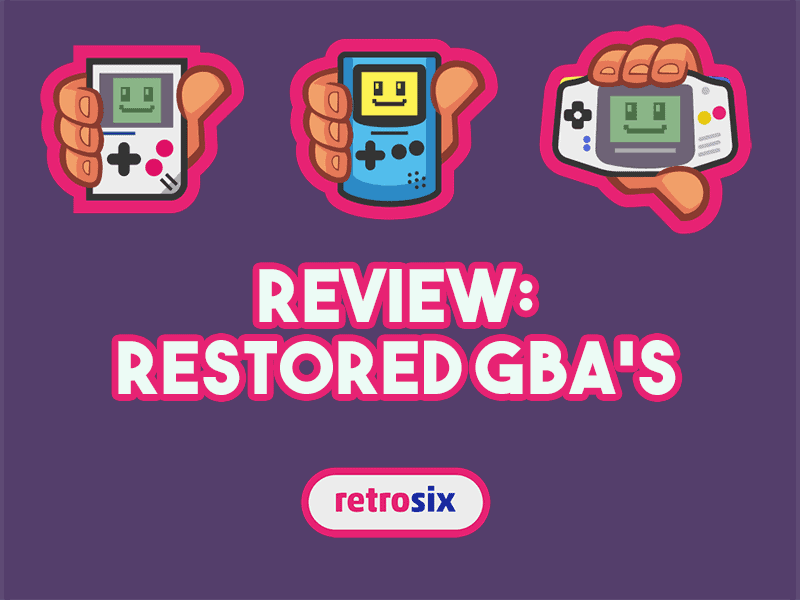 ‘Hand-restored to its original condition, with a new shell, buttons, screen, [and] boxed making the perfect gift for a die-hard gamer. We take an original Game Boy Advance and start by taking it apart fully. We clean the PCB, replace any broken or worn components such as the Link connection, volume and power switches, and do a full hardware test to confirm good working order is restored.

Next, we replace the old, used, and worn shell with a brand new cast ABS precision shell and buttons from RetroSix, along with the rubber contacts and buttons to restore that brand new button press feel. Next the big upgrades. We change the LCD screen for a new IPS backlit screen and upgrade the audio amplifier to a powerful class D amp as well as installing a new 1W speaker to give the audio a 400% volume boost!

No more AA batteries, all Prestige consoles now come with a CleanJuice USB-C battery pack. The console is powered by a 6.2W lipo battery and charged using any USB-C cable. Finally, we replace the plastic screen protector with a modern tougher glass screen protector so your old new console stays newer for longer. The finishing touch is a boxed and sealed product perfect as a gift for any retro gamer… or maybe even treat yourself?’

If you’re not wanting to take apart your own original GBA and swap out all of the parts, then this is the way to go. The cost may seem daunting at first, but if you’re dedicated to playing your GBA and it’s your go-to handheld, this is nothing. After you consider the cost of the items and how much uncertainty you may have upgrading the screen and such. That’s not to say that you can’t buy these pieces yourself and upgrade them…
But Retrosix has the experience and the products already on hand. You just press purchase and you get what Nintendo would ship us if they had created the GBA nowadays. This product is so prestige it’s better than what Nintendo’s official refurbishment used to be. This product has almost zero downsides to it. Bottom line, I almost never talk to my friends about what I’m covering for Hackinformer. However, this product is so incredible, I had to talk about and show off this product to all of my friends. Needless to say, it’s a jaw-dropper.