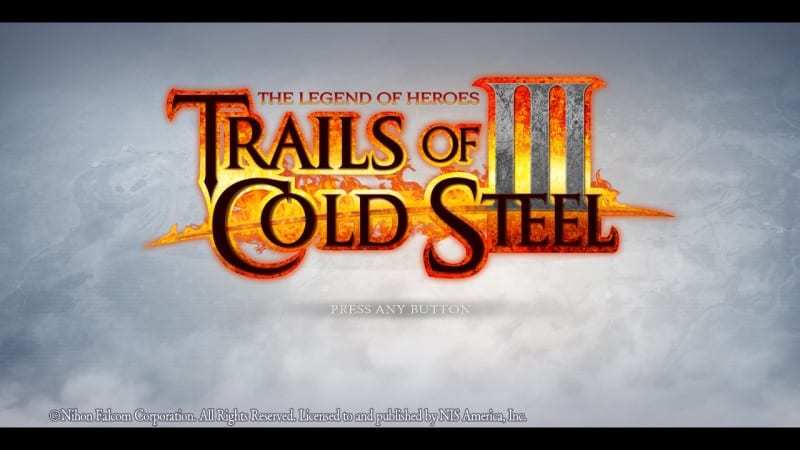 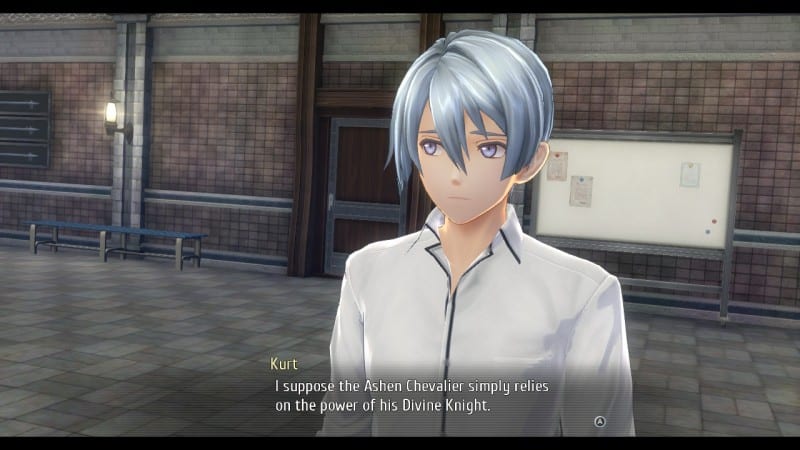 Take note; this review will not be fully in-depth as the PS4 review (here if you missed it) as the game is the same. Instead, I will touch on how it runs on the Nintendo Switch. I will have the usual sections as my other reviews, but some areas (mainly gameplay, visuals, and audio) will be more fleshed out.

The story is as follows for Trails of Cold Steel III:

Nearly a year and a half has passed since the Erebonian civil war, and much has changed since then. From the shifting stances of countries to the internal politics of the Empire and even the life of Rean Schwarzer, the shadows of the past have given way to the embers of a new chapter. Now graduated from Thors Military Academy, Rean has become an instructor at the Thors Branch Campus, a newly-opened academy that quickly finds itself thrust onto the national stage. It is here that he takes the lead of a brand new Class VII, and must guide a new generation of heroes into an unknown future. Though all is calm now, the nefarious Ouroboros organization continues to weave a dark plot that could engulf the entire continent in war…or perhaps something even more sinister.

Players take the role of Rean Schwarzer as he is now an instructor, leading the new Class VII. While he does this, it is clear the new Class VII’s destiny is intertwined into the Old Class VII’s future. Each member of New Class VII (titled Class VII: Special Operations), struggle to find their role within the class, as well as their purpose. As Instructor, players will help shape the stories of our new class. 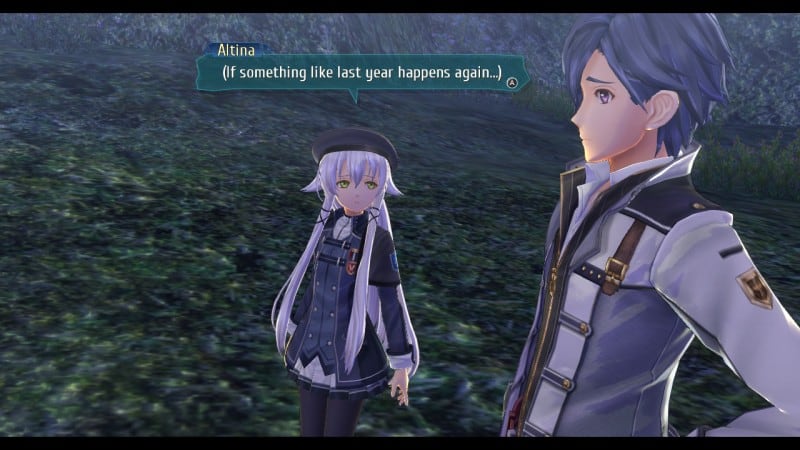 Additionally, while leading students during your school life as an instructor, players will also uncover the fate of the land, and possibly the world. Old villains return, with new ones in tow. Instructor Rean and company will strive to undercover the secrets of what lies behind the scenes and attempt to stop it before it takes the world’s stage. 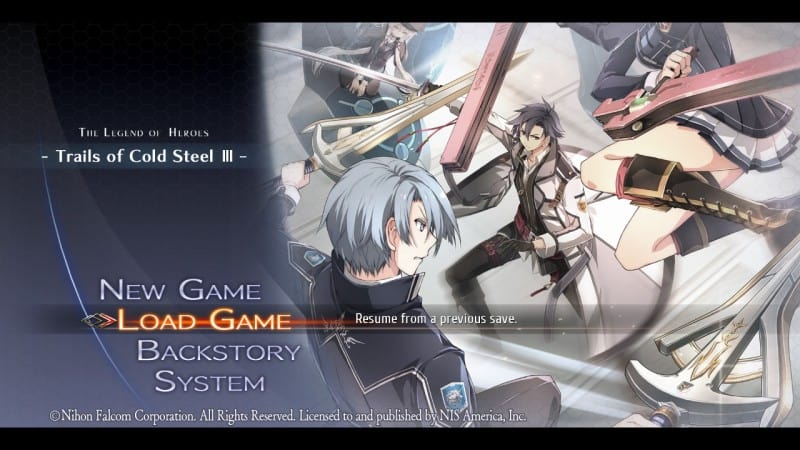 As in my previous review, I recommend being familiar with the stories of The Legend of Heroes: Trails of Cold Steel 1 and 2 before playing this game. Unfortunately, the first two games are not on the Nintendo Switch (yet, hopefully), due to the publishing license being with another Publisher. However, as referred to in my PS4 review, the backstory section is included in this version of the game as well. It provides more than enough details of the previous titles and vital information to catch up with any new player. Additionally, there is also the youtube route of watching the “movie” versions there.”

As the Nintendo Switch version is the same as its console and PC counterparts, I will not break down the gameplay as in my previous review. Frankly, it’s easy to pick up as the game provides enough tutorials and allows you to refer back to controls at any time. This section will focus on how it runs on the Nintendo Switch. 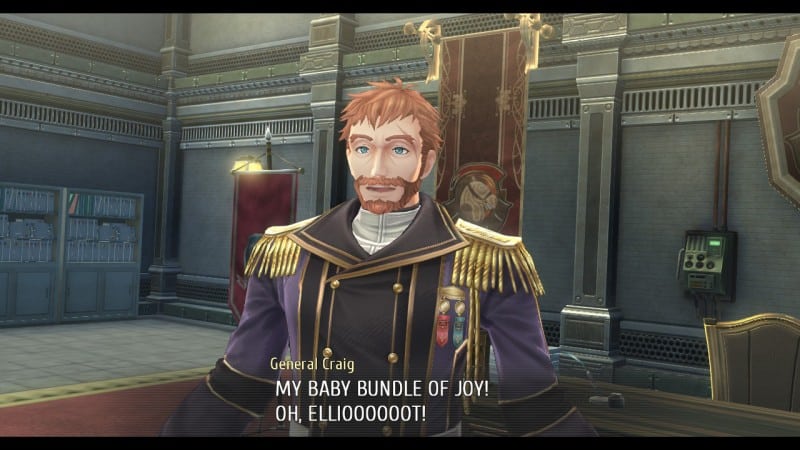 To start, both docked and handheld modes run the same. By this, I mean Trails of Cold Steel III Runs at 720p and 30fps consistently no matter how players decide to venture into Erebonia. Hats off to the team for making it consistent across the board. In addition to that, there is very minimal loading in the game as well. Each section loads in around 3-7 seconds at most. This is not much different from the PS4 version, either. Once again, hats off to the team for achieving this. 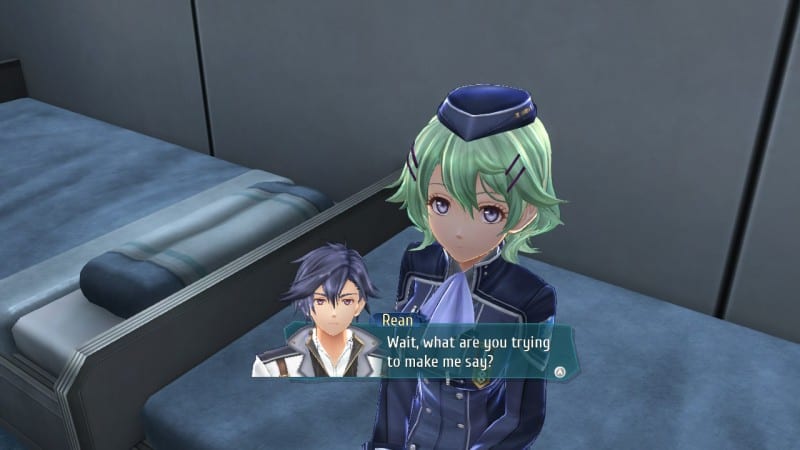 However, that is not to say there are issues. During my 100 hour playthrough, I encountered loading bugs and frame drops. Most of the bugs I met were all in during the Crossbell section of the game, and the game crashed one time. Below is a clip of the crash I encountered.

It was the only crash I encountered. However, this section of the game has frame drops all over the place. It would go from a consistent 30fps to 20ish fps when running around within the city. Outside of the town of Crossbell and for the game overall, everything was consistently at 30fps. This is something I hope is patched in the future, to have a consistent FPS within Crossbell. 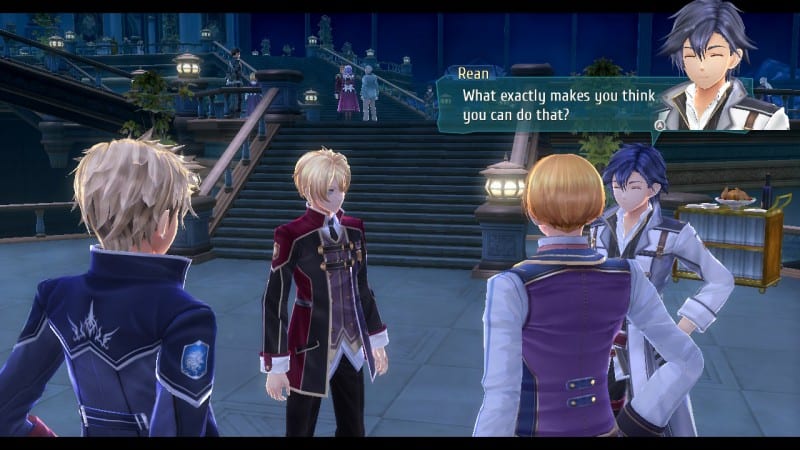 Visually, the game is at 720p resolution, docked, and handheld. It looks good, but not the best looking version of the game, but it’s presentable. It being 720p handheld itself is, on a personal note, really good. Players can tell it is a visual downgrade in comparison to the PC and PS4 counterparts. However, it is understandable as to why that is. To have the game on the Switch and run as well as it does, some sacrifices had to be made. This is a small price to pay as its not that bad. 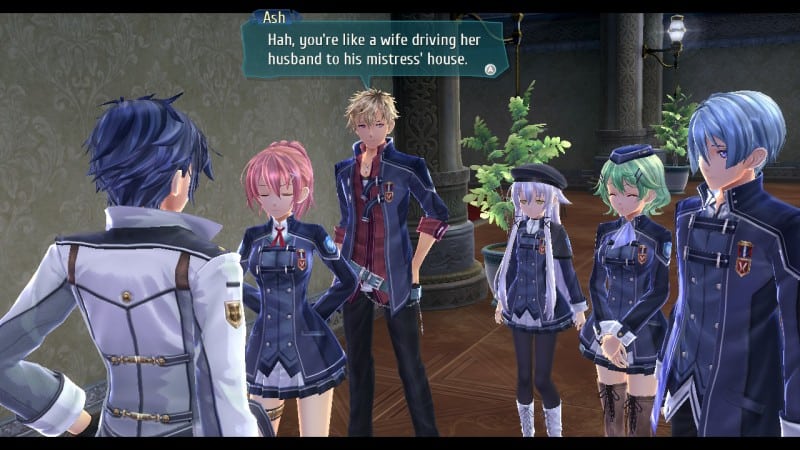 Some interesting visual glitches do occur within the game, though. Things will randomly pop in at times during cutscenes, not the gameplay itself. One of the most interesting glitches I had was after some battles (or cutscenes), characters on the screen will have their legs just move around wack for around .5 of a second (like a quick kick) before coming back to normal.

Other interesting visual glitches I encountered were some character pictures would not load in during moments where they would speak (i.e., their text box), or would have the wrong image. Below is an example of that: 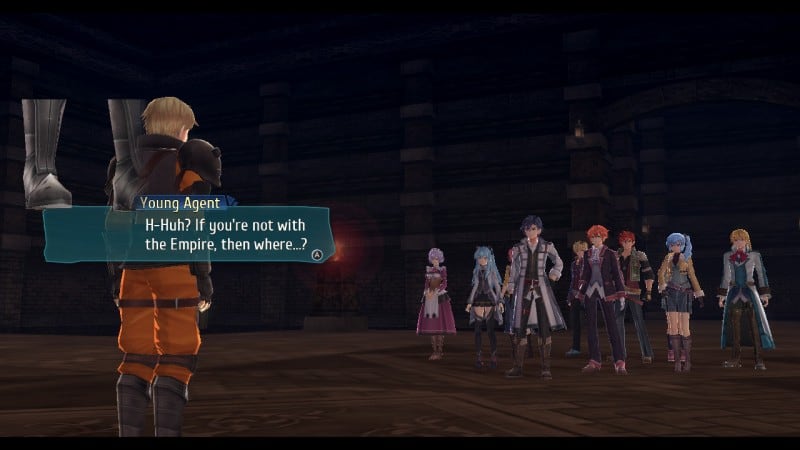 Note: this happened every single time I loaded up this scene. The young agent has a profile picture of his feet during his scene when he speaks. Not sure what happened, but these visual glitches are something I hope that is addressed in a future patch.

Audio-wise, when docked, the game has no issues. The excellent soundtrack and usage of the audio itself are intact, just like the PS4 and PC versions. However, in the handheld mode, this isn’t the same. Those who played Trails of Cold Steel 1 or 2 on the PS Vita will fully understand what I mean here.  The audio itself has some sort of audio compression to it. As a result, at times, the game sounds muffled.

However, this isn’t the only audio issue I encountered. The game seems not to be mixed correctly audio-wise for the handheld mode. I found myself turning up the BGM and voices in the main menu while turning the sound effects down. No matter how high the BGM was, It would not be sufficiently loud or sound muffled at most parts of the game. However, the voices are mixed correctly and come through just fine. It may have been a glitch as I found this issue resolved towards the end of the game. However, during the vast majority of my playthrough (around 60 hours of 100 were done in handheld mode), I encounter the audio mix issue and the audio compression issue majority of that 60 hours. I found myself playing with the sound setting in handheld mode to find a decent balance among all three choices.

It isn’t a deal-breaker, but it is odd how these issues came through. I hope they are addressed in a future patch as well. 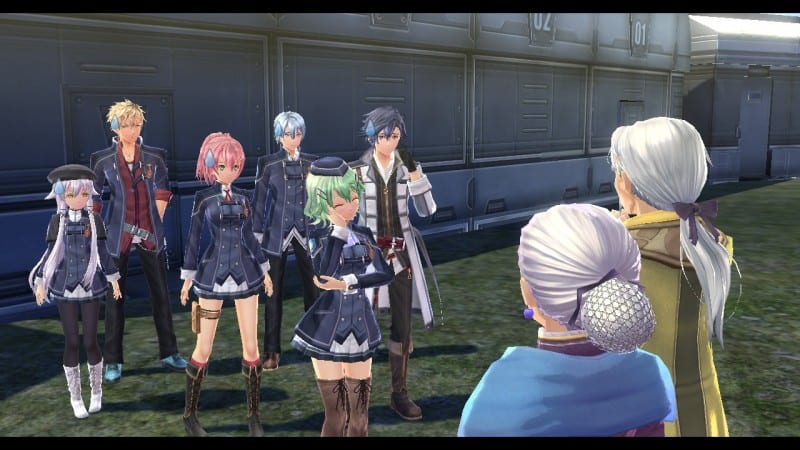 Despite the issues I had, Trails of Cold Steel III was still the same game I remember and still one of the most fun times I had in a video game. Even now, as I finished a 100-hour playthrough and am typing this review, I find myself looking at my Switch Lite wanting to start another run immediately.  The fact that I can take the game I considered my GOTY when it came out on PS4 on the go at any time is a beautiful thing. 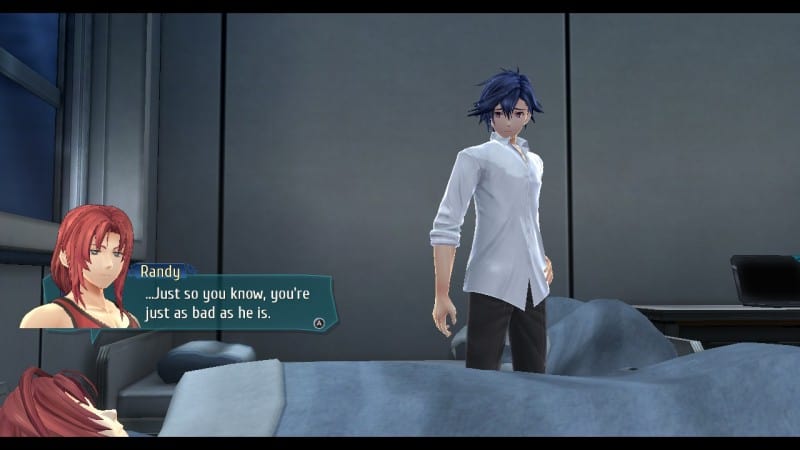 Trails of Cold Steel III for the Switch has the same replay values as in my PS4 review. You get NG+ bonuses available once you beat the game. If there are missed quests from your initial run, players have a reason to go back and replay an excellent game. 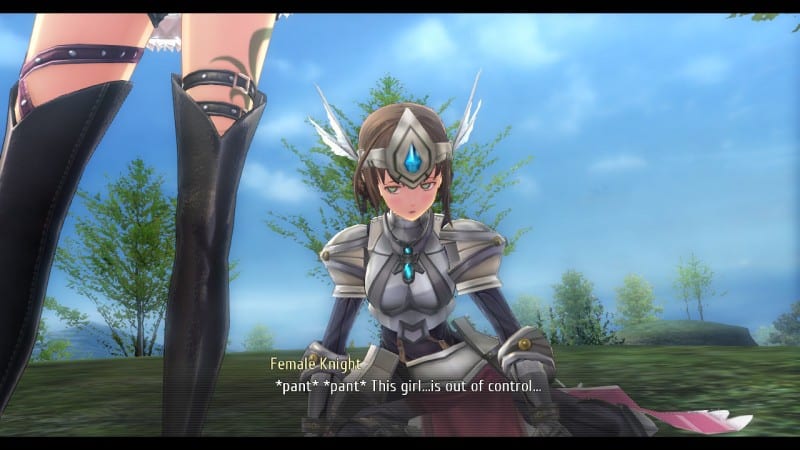 In my Playstation 4 review, I wrote the following:

As a huge RPG fan in general, it is a rarity that a game has me this immersed. The last RPG that has gripped me like this was most likely Persona 5.  I hold that game in my top 5 titles of all time. Trails of Cold Steel III is that good, and I look forward to Cold Steel IV more now. One thing I would personally love is if the Legend of Heroes games come to the Nintendo Switch. 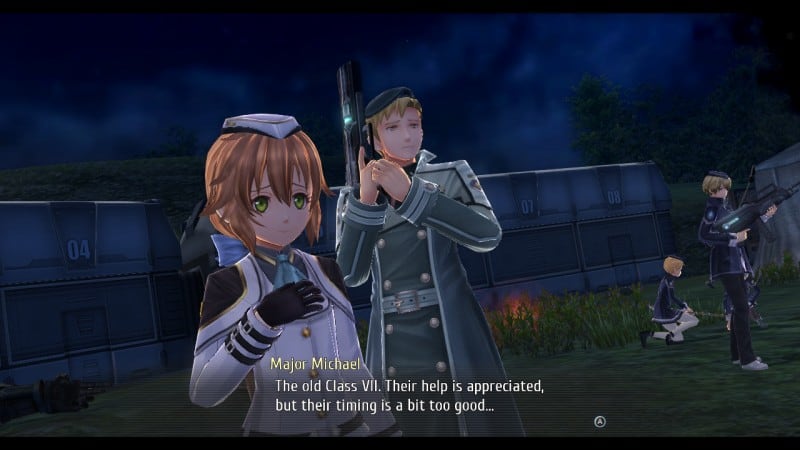 It is funny that seven months later, this still applies, and a personal want of mine did occur for getting a switch version. I take this quote and revise it to say the following, the last RPG that had me fall in love with it was Persona 5 Royal. It dethroned the original and took its spot in my top 5 titles. However, Trails of Cold Steel III is right there with it. It now passes Persona 5 Royal slightly for me, due to the addition of a Nintendo Switch Version.

The fact that NISA made a portable version of one of my favorite RPGs of all time is a beautiful thing. I was given the opportunity to replay a game that had some of the best gameplay, story, music, and overall greatness once more in a new format. It is by far my GOTY switch game of 2020 so far, even with its current issues. NISA has show love and cares for this franchise, so I have faith they will patch the issues mentioned in this review over time. It is not expected patches will come right away due to the pandemic (seriously, everyone stay safe, mask up if you go out, and follow the CDC guidelines), but they will come. 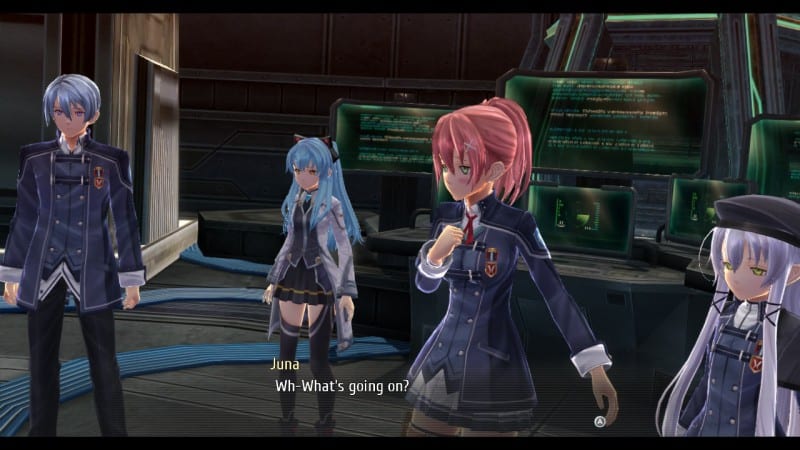 Trails of Cold Steel IV is on the way later this year for the PS4 and 2021 for Switch and PC. Players who have not had the opportunity to get into this franchise or play this game have three different ways to play this game. If you are on the go, grab the switch version and play a JRPG masterpiece at your own time and pace.