Are you ready kids?! It’s been almost two decades since the original Spongebob SquarePants Battle for Bikini Bottom released. I didn’t get a chance to play it then as I was too young to buy games on my own. It looks like at the time it received generally favorable reviews. On average it received a 7/10 score from most outlets. This doesn’t include the GBA version that received a bit lower ratings. Today I’m going to review the brand new Battle for Bikini Bottom Rehydrated (THQNordic, $29.99) I’m going to approach this review as if I’m reviewing a modern game with no history. I just want to know if I feel that it’s a good game overall and not try to compare it to older style games. Let’s dive in! 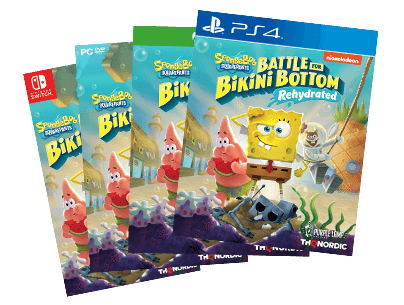 ‘The cult classic is back, faithfully remade in spongetastic splendor! Play as SpongeBob, Patrick and Sandy and show the evil Plankton that crime pays even less than Mr. Krabs. Want to save Bikini Bottom from lots of rampant robots with your mighty bubbles? Of course you do! Want to underpants bungee jump? Why wouldn’t you! Want to join forces in a brand new multiplayer mode? The battle is on!’

First let’s jump into the audio aspect of the game. We’ll talk about the music first as that was my only real issue with the game. Each world has their own repetitive song throughout it. Since they’re very large levels, you will hear a song much more than you expect to. I know it’s a licensed game aimed at children, but I feel like we deserved at least two more songs per level to play randomly. It was a motivating force to help me finish a level so that I can feel relief once I get to the next level and hear a new song. Will they fix this? Probably not. Is it that big of a deal? That depends on you as the player.

The game features all of the main characters that you come to expect. The cast gives really nice, clear, fully emoted voiceovers. Now, it’s obvious that they were recorded twenty years ago. The voices sound much better than today. They were younger then and had more gumption in their voice. The only odd man out that I came across was with Mr. Krabbs. He definitely sounds a bit off, it could just be my ears, but I’m guessing it was more likely a different voice actor portraying the money-grubbing crustacean.

With the look of it all, I wanted to start off with the design of the levels. Level designs are really unique compared to other action platformers of the time. Young players can just run through them if they’d like, naturally. However, more experienced players can find the hidden extras that really show off the level. There’s a full 3D camera for exploring the world. I found many extras and/or baddies that weren’t on the same plane that I was on, just by using the camera. Some levels have a lot of verticality to them too, it’s honestly surprising. But, yeah, it’s really fun.

In regards to the looks, it’s SpongeBob Squarepants. If you’ve seen the show, then you already know the look of the whole thing. The art style in this title matches the show almost perfectly. There’s obviously the conversion to 3D, but otherwise, it’s a great representation. I definitely enjoyed how they made his pineapple house look like it had the brushstrokes used to color it in. The rest of the world follows suit, but since you go back to his house in town a bunch, it made a big impact on me. 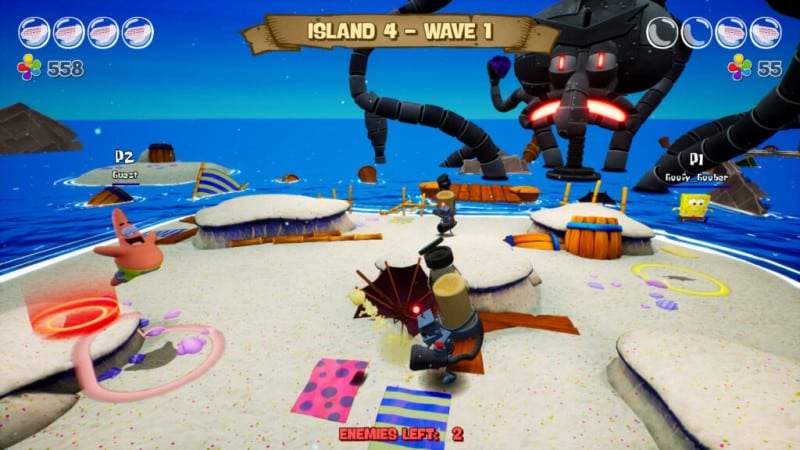 In Battle for Bikini Bottom, you get to play as your favorite under the sea characters across vast levels. You can play as Patrick, Spongebob, or Sandy. It’s not as simple as pick one character and play through the whole game. Different characters can reach different areas and have varied abilities. It is true that if you unlock an area with a character and then access it later with another character.

The characters all feature unique controls. I played as Spongebob as much as I could, so I’ll quickly go over his moveset. Spongebob has a bubble wand spin to attack and hit certain buttons. He can double jump, he can ground pound (this works on enemies and buttons). He has a single high jump using a bubble technique as well. As you play you’ll find there are different gameplay mechanics in the game other than just attacking and pounding. For instance, there are slides that break up the monotony of the game. You ride them down collecting items and killing baddies.

The levels are flooded with “shiny” items. You’ll collect the shinies to trade in for things along the way. They come in a variety of colors and have different values. The rarer purple shiny is in the “dangerous” places but has the highest payoff. You don’t have to touch them directly, the game is forgiving. You just have to be near them. Difficulty slowly increases as the game goes on. The robots get a little tougher, same with the jellyfish, etc. But as you go the game gives you more shinies and underwear which are like hearts in the Legend of Zelda.

There are other collectibles to go after. For example, Patrick has a missing sock collection, so you’ll need to keep an eye out for lost socks. Most of all, you’re striving to collect golden spatulas as you make your way through the levels. Those help you unlock the newer worlds. You’ll find them locked behind walls that require shinies, after boss battles, after solving puzzles, and other locations.

The storyline is solid with believable characters. Whoever wrote the game was able to encapsulate the characters perfectly the way they come across in the show. Nothing in the story seemed out of place or jaunted when making my way through the game. You’re going to have a blast listening to their banter and discourse. The main story finds Plankton creating an army of robots to help him and things go awry when he forgets to make them obey him. So now, these robots are running rampant. Spongebob, however, thinks it’s his and Patrick’s fault and wants to make it right by taking down the robots and helping Plankton get back into the Chum Bucket. The rest of the story unfolds as you play.

I do have a few negatives about the game that may be patched already, but I’m going to bring them up. The loading icon is the smallest icon of any game I’ve seen. It’s practically invisible down in the corner. It needs to be increased at least 3x. It looks like you’re just staring at a frozen screen, no knowledge of what’s actually happening. Once you’re in the game it’s a little more than obvious that it’s built using the old code. Any time you get out into an area you’re not supposed to be it takes time for “out of bounds” hand to catch you and put you back. Why not create an invisible wall there instead of doing it the old way? Lastly, there are sometimes the checkpoints just did not work. There was a scenario where I passed 2 checkpoints since the previous save. I died three times in that area and the game always returned me to the save point and not the most recent checkpoint. 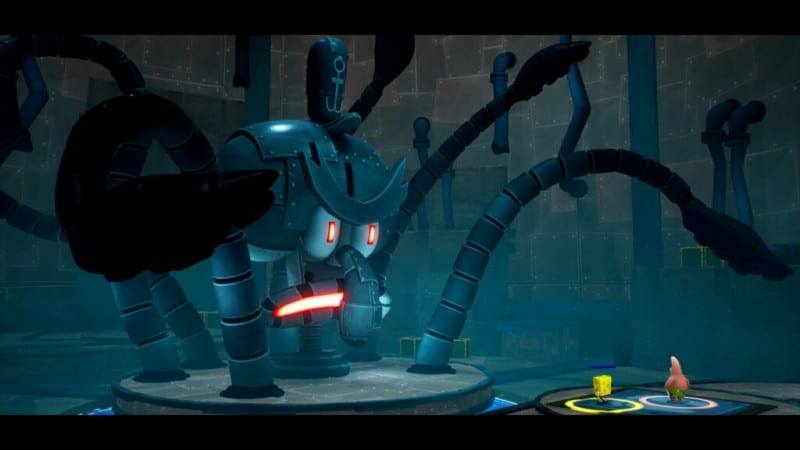 There’s not too much to say about this game with regards to its longevity. It’s a nice, lengthy game as I’ve already covered. You can play through different parts of the game with different characters if you want to get the most mileage out of this game. The new addition to this game is the online aspect. In it, you can grab a friend the brand new horde mode. You can play this in person as well if you’d like, no need to wait until they’ve also purchased the game and have time to be online at the same time as you. Yes, you can play with a random person online, but I don’t think many adults that have nostalgia for Spongebob will bother with that. You have seven characters to choose from when you play. You can be Spongebob, Patrick, Sandy, Gary, Squidward, Mr.Krabbs, or Robo Plankton. There’s a total of 26 locations you can play Horde mode in and you can change up the settings of the gameplay too. 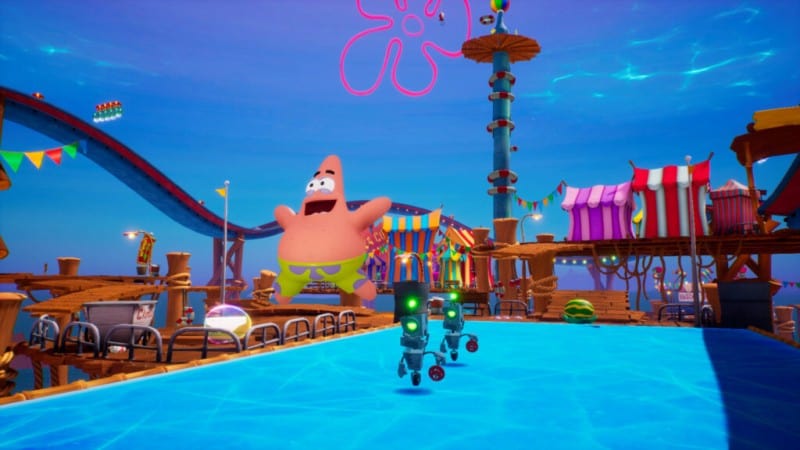 Truly a fun time! I couldn’t stop playing it. In times like these, we need SB and all of his light-hearted antics! Although if you’ve already completed it on Gamecube/PS2/XBOX, you won’t find much new here other than graphical upgrades. Yes, there is an online component now for those of you interested in that. If you’re an older player, you may find it hard to get your friends to also pick up the game. I’d only get the game if you’re expecting to play the single-player primarily, just in case you’re the only person you know playing it. And, of course, if you’re all new to Battle for Bikini Bottom, you’ll have pure, unadulterated fun! 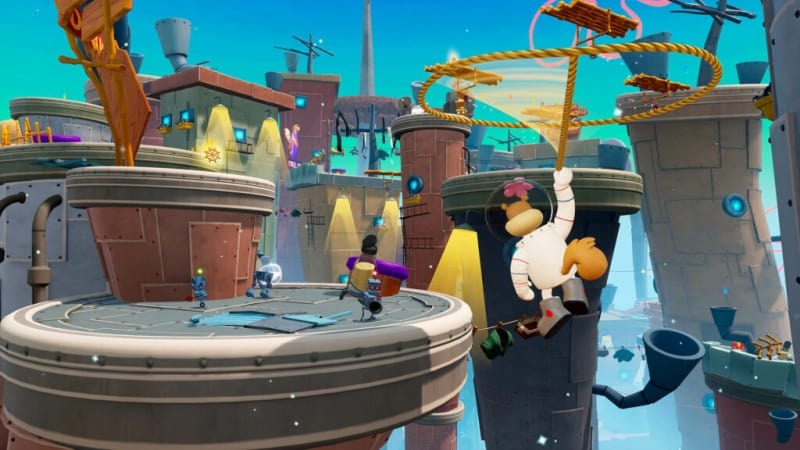 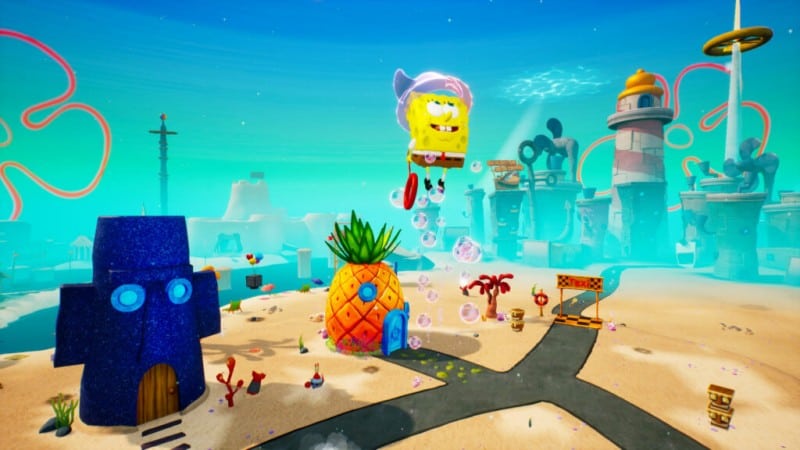