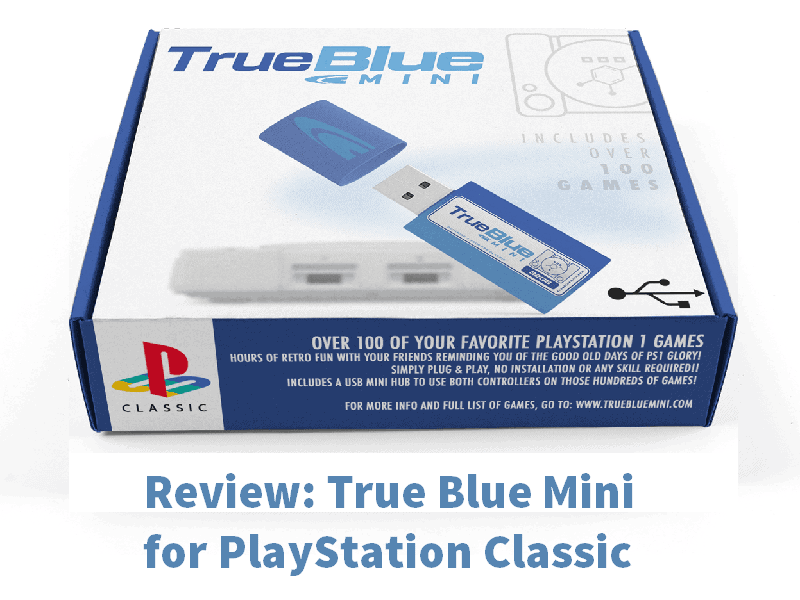 This review might be considered controversial. We’re reviewing the True Blue Mini which is a USB device for the PlayStation Classic that comes preloaded with games. In the same vein where we have reviewed GBA clones that come preloaded with games, we advise that you do not buy this unless you already own the games that are on these. The only legal way to play backups is to own the physical copies already. But is the True Blue Mini worth it even if you already own the games? Don’t worry, we’ll discuss all of this and more!

‘Hours of retro fun with your friends from the glory days of the PS1! Simply plug & play! No installation or soldering required! Includes mini USB hub to allow both controllers simultaneously!’

‘True Blue Mini is a simple plug & play device that adds hundreds of beloved PS1 games to your PlayStation Classic collection by simply inserting the dongle into the USB controller port of your console. Includes a mini USB hub so you can enjoy all the fantastic 2-player games without losing your second controller! Accept no imitation: True Blue Mini is the original PlayStation Classic game enhancer. We use only high quality components and ensure 100% Plug & Play compatibility with your console– for any region, at any time. Beware of low-quality/faulty clones!’

Unboxing Video of the Meth Pack (they’re both the same inside):

Well, there aren’t many pros to discuss here. So first off, as you’ll have seen in the unboxing video or the pictures, it does come with a hub. A USB hub is great if you still want to be able to play any two player games. This is nothing I care about, but I’m just one man. We talk about the hub more in the cons though and a workaround for it. So it’s not all sunshine.

For those wondering, this comes with the NTSC versions to get full 60FPS.  Now if you buy this for a PAL system that you won’t be seeing any PAL games on it. Sorry European market! On a side note though, I like that they included a sequel to Jumpin’ Flash on the Meth pack.

There is one additional feature built in, I’m sure not by this company’s design, but it’s there nevertheless. The Select and Triangle short cut works. This means you can pull up the alternate menu in game and be able to do any tweaks that you want to. All save functions work as they should as well, so that’s nothing you should have to worry about.

The product basically plugs in and plays. That’s something we’ll touch back on in the cons section. Not a huge ordeal, but it doesn’t exactly help either. And the last pro here is that you get a large list of games. That goes even for the fighter pack. At only $30ish, you get nearly 60 games. This is almost three times what Sony gave you and you also get to keep your original 20 games. If you buy the Meth or Crack packs, then you’ll get 101 games. These are only roughly $10 more than the fighter pack. So the value is pretty decent. 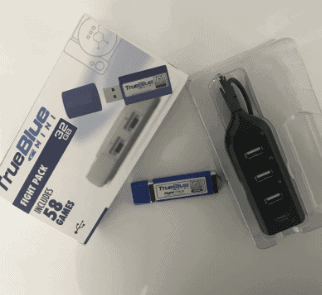 Now to discuss the dreaded downsides to the True Blue mini. Let’s start with the most obvious points here. First of all, it costs money. Yes, to get something that you can do for free at home, this company charges you actual money. We’ll come back to this topic in the Final Thoughts section below. But I don’t agree with this and it’s a major turnoff.

Next, with regards to the program that they used to make this, there are no extra features. Like the biggest one of all, it doesn’t let you have access to Retroarch. Now I understand that that is because they want this to be a plug and play. And I sure do understand that this device basically is locked and you can’t add or subtract games, so how could you add emulator ROMS to it. It’s supposed to be for those with no knowledge. But I don’t care! They should make these editable. The person buying it doesn’t have to use that feature. But if I want to, I should be able to.

Previously I had mentioned that you get to still have access to your original 20 games that came on the PlayStation Classic. And while this is true, you cannot access them easily. You would think that they used a newer version of BleemSync that gives you access to the 20 games in the list of added games. That is simply not the case. You can’t access the original 20 games without disconnecting the True Blue Mini first. This is slightly aggravating, but hopefully, they can just update this in the future.

I had also mentioned before that it was basically a plug and play device. Well, yes, that is sort of true. The only caveat here is that there are no instructions in the box. This means that you would have to look up instructions on what to do with a BleemSync USB device the first time you want to run it. It only mentions you’re supposed to unplug everything first before inserting the True Blue Mini. If you want instructions, check out our tutorial here. Scroll to the “Instructions for Modding PlayStation Classic” section and use steps 6 through 11. They’re the only steps that apply to the True Blue Mini as well.

There was the pro that I had mentioned before that you get a USB hub with the product. There is a catch here though in that it is not a powered USB. This means that potentially you could overload the power that the PS Classic needs and cause issues. As a side note, you could instead use the hub on the player 1 port and plug both controllers into that. Then leave the USB drive in the player 2 port.

Lastly, as I mentioned in the unboxing video, I was going to try to assess information about the USB device that the games are stored on. However, my computer wouldn’t tell me who the manufacturer of the USB device was or anything of that nature. Since the device is formatted so that only the PS Classic could read it, I let it go. But as you’ll see at the picture I added at the bottom of this page, it does seem to have some Asian print if anyone can decipher that for us. 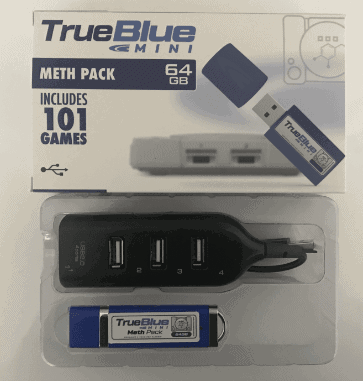 While this thing has a purpose, I feel that I need to make some statements here. First off, this is just not for everyone. Anyone with a collection of their legally backed up PS1 discs can do this much more simply with AutoBleem or BleemSync for free. This is for the people who have zero ideas on how to do that and would rather throw money at the problem and get a solution or do some research.

Secondly, those people that use BleemSync also get added benefits such as, oh I don’t know, RetroArch! This product only comes with games, which is fine to an extent. But why spend money on something you can do for free that can get you more features? Hell, BleemSync also gets you custom music, custom themes, original 20 games appear in the list, and a whole heap of other features.

This is clearly using an older version than 1.0 of BleemSync and it only has the games. If this is all you want, fine. It does solve the issue that Sony caused in the first place, a lack of quality games. If that’s all you want and you bought your PS Classic for cheap, then this is a decent buy. If you know you can follow instructions and you have a USB device already, just do it yourself.

If you’re looking for the Meth or Crack packs, they’re the same link. You’ll instead click the radio button for either of them and then you’ll click Add to Cart. Check the picture below.

If you’re not in the US, click here to find a seller in your country!