Developer Specterdev has finally released the PS4 FW 5.05 kernel exploit that so many of you have been patiently waiting for. If you’re still looking for a PS4 on lower FW I recommend checking out this post here. 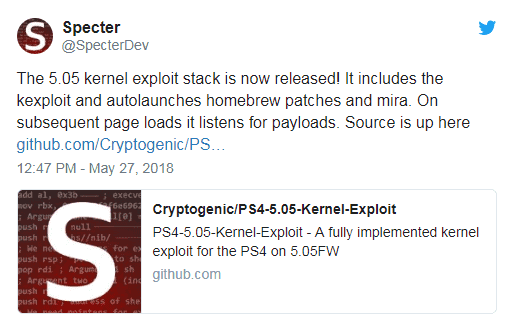 In this project, you will find a full implementation of the second “bpf” kernel exploit for the PlayStation 4 on 5.05. It will allow you to run arbitrary code as the kernel, to allow jailbreaking and kernel-level modifications to the system. This exploit also contains auto-launching code for Mira and Vortex’s HEN payload. Subsequent loads will launch the usual payload launcher.

This bug was discovered by qwertyoruiopz, and can be found hosted on his website here.

The following patches are made by default in the kernel ROP chain:

Like with all new releases some homebrew & payloads like GTA cheats might need to be updated to reflect the changes made for FW5.05. If you are on FW4.05 or 4.55 I would wait a little bit before upgrading, especially if you have a lot of backups that play on USB drives. All of these things will probably get updated for FW5.05 in do time, since it will be the new golden FW to be on but other than that it’s ready to enjoy. 🙂

To run the exploit on your PS4 visit… http://crack.bargains/505k/ or check out the post below on how to run it on your PC.

How to host PS4 Exploit for FW5.05 right from your PC

Almost forgot to include js_shellcode.py – my Python script to convert payloads to shellcode – you'll need to use this if you want to update Mira/HEN (and reintegrate) or add a custom payload to auto launch.

This kernel release will also work on FW 5.07 too.

If your console is 5.07, new kex will work too pic.twitter.com/HuWJHGfvBG

I like to get everyone the right info and I like to help others get the most from there electronic devices. I enjoy playful cleverness and the exploration of technology. My Motto: You own it, you can do whatever you want with it.
Previous XCI-Explorer lets you view your Nintendo Switch Game Backups, its Certificate & more
Next How to host PS4 Exploit for FW5.05 right from your PC