We have yet to see a utility for us Users which allows us to do a full XCI Game Backup with all Partitions and not just the normal Game Partition as NCA but with Scene-Group BBB having released quite a few Games in XCI Format already and Team Xecuter using XCI as their Backup Format for their SX OS it was only a matter of time until we would get a Tool which would let us mess with these XCI Roms. 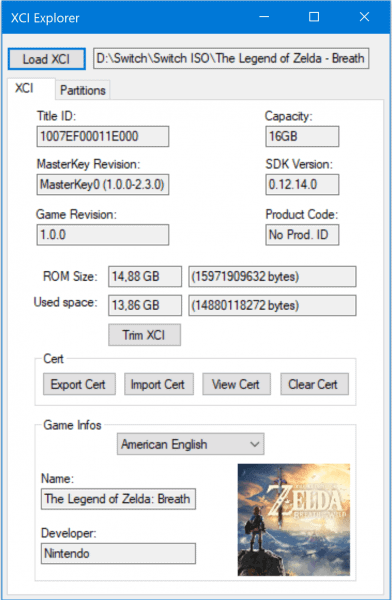 If you’ve been part of the 3DS Scene back when Gateway was the Go-to solution or Sky3DS you probably know that every 3DS Game had their own personal Header. Scene Dumped ROMs had public headers which if used online would lead to your 3DS getting banned pretty fast. To avoid that you had dump one of your own 3DS Games, extract the Header and then inject that header into the Scene 3DS ROM. This way you could safely play online with Scene ROMs.

As of now, we don’t know if you’re gonna get banned for using public Certificates (Headers are called Certificates on Switch) but it is very likely. Switch ROMs dumped by BBB have completely zeroed out Certificates so it would be pretty easy to find out who uses Scene Dumps. With this Tool, you can now Export a certificate from a ROM, Inject a certificate in a ROM, Look at a ROMs Certificate or Zero it out. This pretty much makes it the Switch equivalent to the Gateway ROM Patcher Tool available for the 3DS.

Compared to Gateway ROM Patcher XCI-Explorer also lets you trim a ROM though. Trimming a ROM removes the unused Space at the end of each ROM. ROMs have fixed Sizes (2GB, 4GB, 8GB, 16GB) which if the Game doesn’t fill all of the Space get filled up with FF (Garbage Data) to meet the specified ROM Size. By removing this Garbage Data (Trimming) you can make the ROM smaller without removing any of the actual Games Data. This way you can fit more Games on your SDCard.

But as already mentioned there is one big problem for the End User. The only current use of this Tool is to Trim ROMs dumped by BBB since there is no Dumper that lets you dump your own ROMs so that you can export their certificates or Trim them. Seeing as to how fast the Switch Scene is progressing though I believe that it will only be a matter of time until People can do full dumps of their own games.

You can download the XCI-Explorer from the Thread over at Maxconsole.