We had an opportunity to spend some time at Gamescom with Digamore Entertainment, a German studio behind the upcoming Android/iOS football strategy Football Empire. We asked about the beta and plans for the future, as well as what exactly the partnership with Jürgen Klopp means for the game. 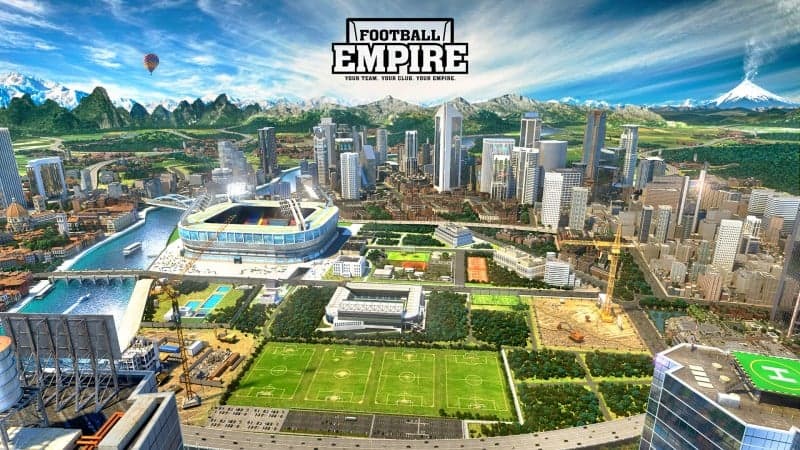 Digamore Entertainment is a new game studio, whose 12 members are currently working on a mobile game Football Empire. At the moment, the game is in beta on both App Store and Play Store and everyone can sign in. I spent some time before Gamescom playing the game (more than I would like to admit) to get a glimpse of what the game currently offers, and here you can behold what that experience along with a 30-minute chat with one of the developers turned into.

Firstly, let’s begin by explaining what this game is about, hopefully without getting too much into details. You start as a manager of a club, whose name you choose, with a stadium and several necessary buildings (like training grounds) and 25 inexperienced players, some more talented than the others. The point of the game is to play matches (therefore gain match experience, make money from tickets and, most importantly, compete in one of two game’s modes – League and World Cup).In order for players to improve (level up), they must also gain practice experience, and because they are not super heroes, they must also rest from time to time. Leveling up players, building and improving facilities costs money, which can be made by playing matches or completing various challenges. It’s all really easy to pick up. Now let’s get to several aspects of the gameplay.

In order for players to improve (level up), they must also gain practice experience, and because they are not super heroes, they must also rest from time to time. Leveling up players, building and improving facilities costs money, which can be made by playing matches or completing various challenges. It’s all really easy to pick up. Now let’s go over several aspects of the gameplay.

The core of the club, obviously. World Cup matches are played there, at least for now. The stadium is not improbable at this point.

Future: The plans for the full game say it will be possible to upgrade the stadium until it reaches the form you can see in the opening picture of this article, which i is also the loading screen of the game. Of course, as the stadium gets bigger with the upgrades, its capacity increases and so does the Spectator revenue. 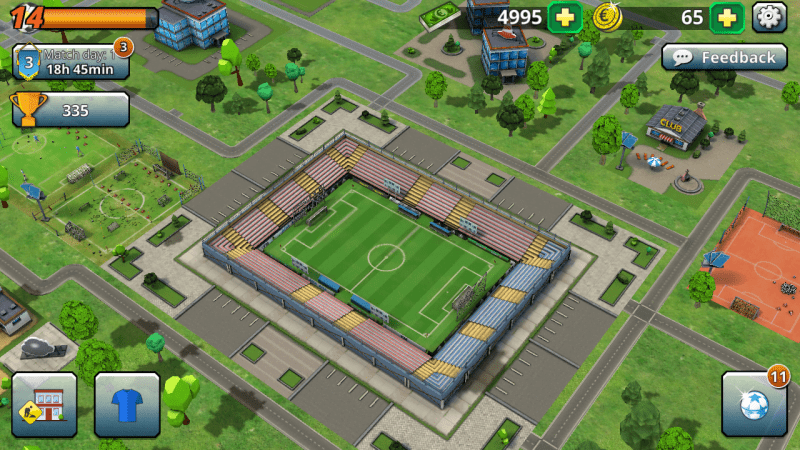 Managers can place buildings wherever they want, as long as there is no collision. Apart from the stadium, there are all kinds of building with different purposes. They are either for players (gaining experience, restoring energy, learning skills) or managers (unlocking or obtaining training/recreation exercises, learning skills)

Future: The developers would like to add more kinds of buildings, like merchandise stores or statues, which could, for example, generate money. There are a lot of ways this could go. Also, they would like to allow players

The game is using „asynchronous“ multiplayer, which means that in order for a match to happen, it is not necessary for both players to be online. This is not going to change in the full version of the game.

Managers select the formation, the players and the tactics, which either slightly improve your team, or worsen your opponent’s team. Or both.

Then the match is started by the „Kick-off“ button and… time goes on, teams have chances and then it’s over. The result is mostly determined by the teams‘ strength (sum of starting eleven players’ levels). The team with bigger strength generates more chances. The success rate in those chances is pretty much RNG, but I have never experienced a case of extremely bad luck for either me or the opponent.

It is not possible to make any changes during matches and it is not planned anytime soon, as it would be too complicated.

Developers are toying with the idea of adding some kind of synchronous PvP with friends in a year, but it is not a priority. 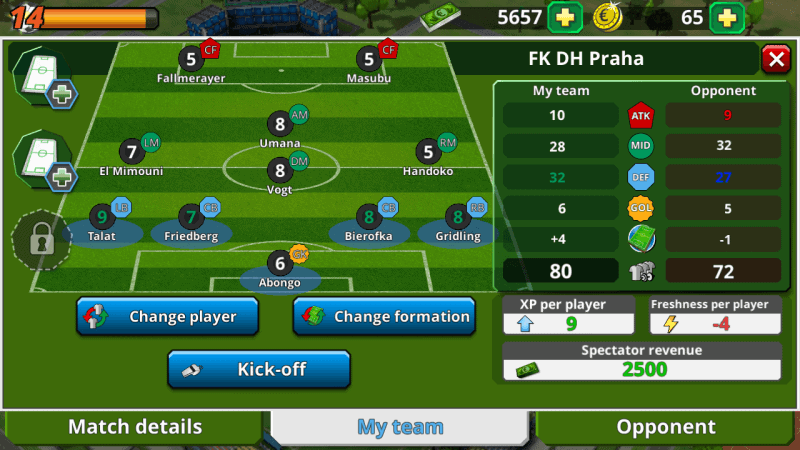 In League, there are several levels of the pyramid. Finishing in top three gets you a promotion, finishing in the bottom three a relegation. Moreover, after each season, players are rewarded according to their position. But the League system will change and it has not been specified to us how exactly.

The World Cup is basically one giant table, which consists of all teams. The position is determined by points, which can be either gained by winning or lost by losing matches. A draw does not have any effect. At the end of each World Cup, top 3 teams are rewarded. This mode is going to be changed completely, possibly to a systém similar to the FIFA Ultimate Team.

Although PvP is not happening soon, custom leagues among friend may. Again, they would use asynchronous multiplayer.

At the moment, managers only have a set of players with different positions. For the future, it is planned to add a transfer market, but its concept has not yet been decided. Players have a different level of “talent”, which determines how many match/practice experience they must gain before they can be leveled up.

The game is free to play and that is not going to change. As for microtransactions, managers can purchase a currency (coins), which then can be used to immediately complete buildings, finish practices/recreations or to buy materials used for upgrading buildings. I think this was handled well by the developers and here is why:

Nothing much is going to change in this area, and the developer assured is it is not going to be possible to buy players or match results with real money. Neither there will be any ads covering the screen.

World-famous football manager Jürgen Klopp, who is the current manager of Premier League club Liverpool after successful spells at Mainz 05 and Borussia Dortmund, is also the brand ambassador of Football Empire. He was the developers’ first choice because he is internationally known and very successful German manager, whose managerial career is a pattern the developers would like for the players of their game to follow. To start at the bottom and become a world class. Apart from smiling for cameras, he also helps with the tactical side of the game.

If you play the game and feel like the guy who explains you basic controls reminds you of someone, yes, that is Jürgen Klopp. The resemblance is quite obvious. 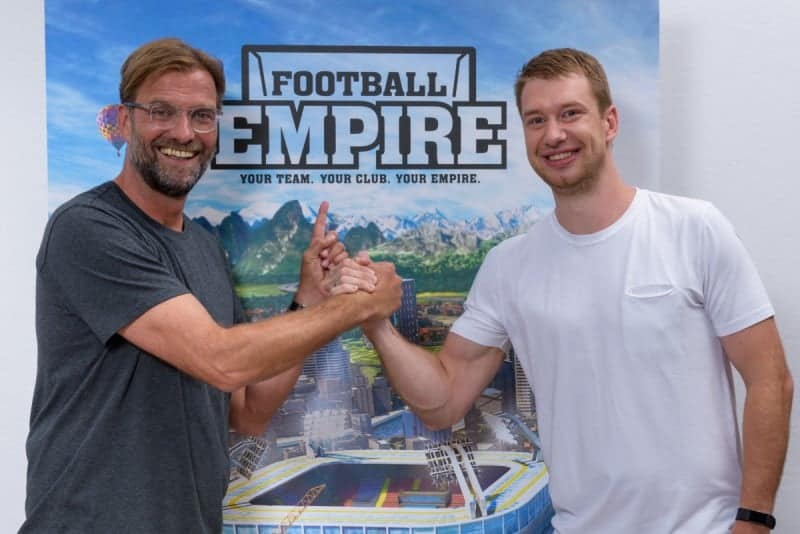 Speaking of “becoming something”, the goal of the game is simple: to become as good as possible. There is no end, no ultimate reward. Although it could be considered reaching level 99, no player has reached that number yet so the developers do not have to worry about it for now.

According to Digamore Entertainment, the beta participants have reacted to the game very positively so far. The gameplay seems to be addicting and Digamore consider themselves to be on the right way. They do not want to make the game unnecessarily complicated, their target audience are “mid-core” gamers.

I can confirm that the game is running flawlessly, although there have been some issues on the Samsung devices reported.

The soft launch is going to happen in September. The game should support 10 languages no later than in February, which is when the full launch should happen.

The game is addicting, easy to pick up and without performance issues. Models are very pretty. But what I like the most that, even though it is addicting, I am not forced to be online all the time. There is always a 24-hour limit for playing League matches, so basically, all I have to do is check the game once a day and I will not be affected negatively. I am looking forward to the transfer market and stadium upgrade. All in all, it is a great game when you want to casually work on something, without having to go through a 15-minute match (not saying that’s bad, just different) and Digamore Entertainment seem to know what they are doing.