Davee‘s Infinity is here! The long awaited perma-patch for the newer “unhackable PSPs” above firmware 6.20 is finally ready!!

It was quite a long time ago since when Davee first talked about the possibility to create a new permanent-patch after Sony patched the first solution in the 6.30 firmware update due to new security checks. Since then we were dependend on the so called light Custom Firmwares with the need to be manually reactivated after a cold reboot.

Some time ago I mentioned that a 6.61 (6.60 then) boot-time hack was possible. This doesn’t seem that long ago to me, but it actually has been almost a year since I mentioned it. Recently I’ve been rolling out actual device tests after many simulations and support software through the year. Last year all I had was a proof of concept and even then it was bare and barely touched. Today, I can now confirm that the boot-time hack works on PSP 1000, 2000 and 3000. This leaves only the PSPgo and E1000 left, both of which will require a little more fine tuning to conquer.

Today the last missing piece is finally here and just by looking at the gorgeous menu one can see the love & time Davee put into this huge project.

Infinity – What it is and how it works

As earlier mentioned Infinity works different to the older solutions. It is not a permanent patch as we know from earlier solutions and it does not involve a cIPL hack either.

Infinity is not a “traditional” permament patch. It basically boots PSP directly into a custom firmware. Still, a permanent patch can be used only to firmware 6.20, so having a permanent patch (kind of) on 6.61 would be a big deal.

Today we know Infinity is even more interesting because it makes use of an old and former used solution from way back in the days and is in fact the first ‘modern’ hybrid-firmware based on 6.61 & 6.31 combined! Why exactly 6.31? Well because this firmware ‘features’ a vulnerability which lets us execute code in the booting process making this a perfect entrypoint for this purpose. Davee self titled his method “a boot-time hack” when he first talked about it.

Anyways what this means for you is that as soon as you have Infinity installed you can simply add a classic custom firmware like ME or PRO on top of Infinity what would make it a Custom-custom/semi-official-hybrid-firmware running on your PSP!! 😀

You can read the full technical explanation on Davee’s blog here!

At first you should already be running any 6.XX Custom firmware to avoid any problems although it shouldn’t matter in the end.

You can find a full step-by-step tutorial in our freshly updated PlaystationGuide PSP-section.

Which devices are supported?!

The PSP Street (11g) can’t natively run the 6.31 firmware but support might be added soon!

Note: The special PSP 3000 version 07g should be theoretically supported. Installing Infinity at your own risk!! (To find out your PSP generation you can for example use the PSP homebrew “PSP Module Checker” v1.0 by J416) 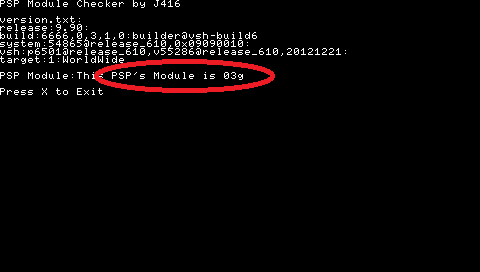 But thats not everything. Davee as a long time scene dev and known to be a very anticipatory person even updated the Chronoswitch downgrader some time ago, with which you can now downgrade from the Infinity firmware back to a normal official one if needed.

So yes, thats basically it for now and all thats left to say is that despite of alot of testing, there still is the risk of (full)bricking your device because of whatever reason. Its YOUR choice to install Infinity or stick to the classic Light Custom firmwares!

So please let us know about any occuring problems and makes sure to consider donating something to Davee via PayPal for his awesome work!