This War of Mine The Little Ones Review

I have been waiting for some time for a certain game to come to consoles. I loved it on the PC, and I am not really much of a PC gamer. I wrote an article letting you all know it’s something you wouldn’t want to miss. If you haven’t figured it out yet, I am talking about This War of Mine The Little Ones. 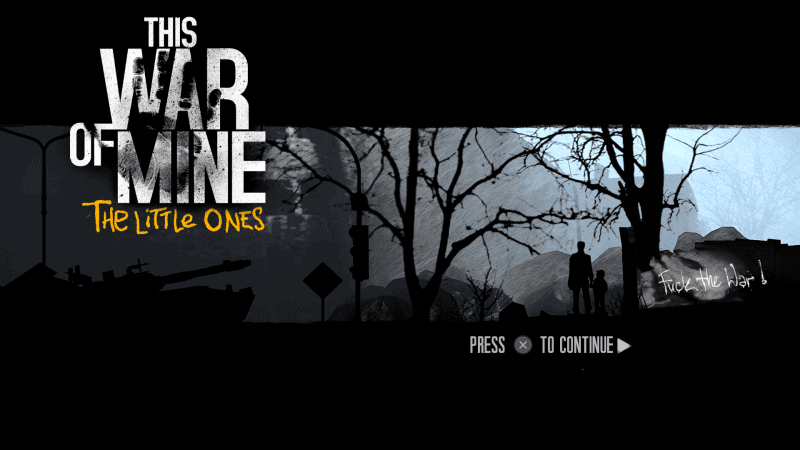 Deep Silver was kind enough to send me a copy for review, which I was super excited to get. This is something that I truly have enjoyed, as far as I am concerned if I had to pic an Indie game of the year it would be this. I have never worked so hard, thought so hard, and played so serious in a game before. I thought about every decision I made very carefully before making them. The outcome of the game is an impression left on me like any other game I have ever played. I hope it’s something you all will pick up and play. Now lets break the game down shall we?

A Bunch of Strangers In The Same House.

When you first start up This War Of Mine The Little Ones your only option to play is “Survive”. This is the main game right here. A war has broke out and a group of strangers have banded together to try and stay alive. In my first playthrough it was the same 3 characters I had from when I played the Steam version last year, which was a good thing for me. I already knew the basis of the game, and to be honest, that’s probably why I made it through the game in my first playthrough. The majority of you won’t be so lucky. Even though I knew what I was doing, I still lost a member of my group. Be careful with every decision you make in this game. I can’t stress that enough. 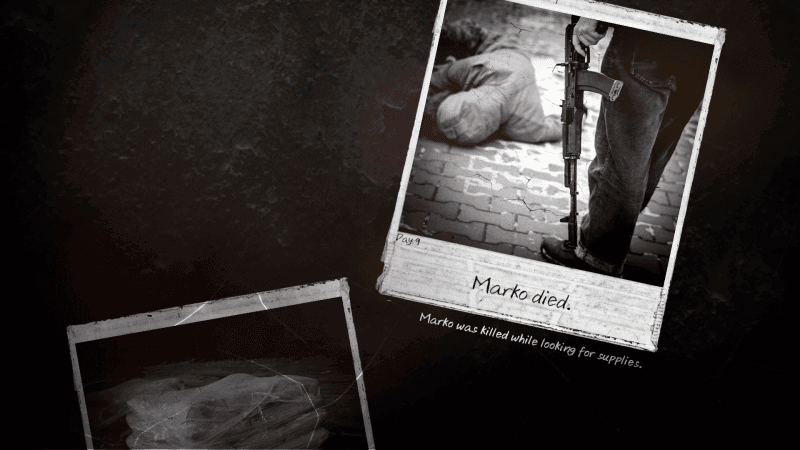 Write My Own Story

After starting the game for the first time, You’ll have the option to go and have “Another Try” which is basically to start over on one of the pre-set stories or the “Write My Own Story” option. Here you can choose up to 4 people to start out with. 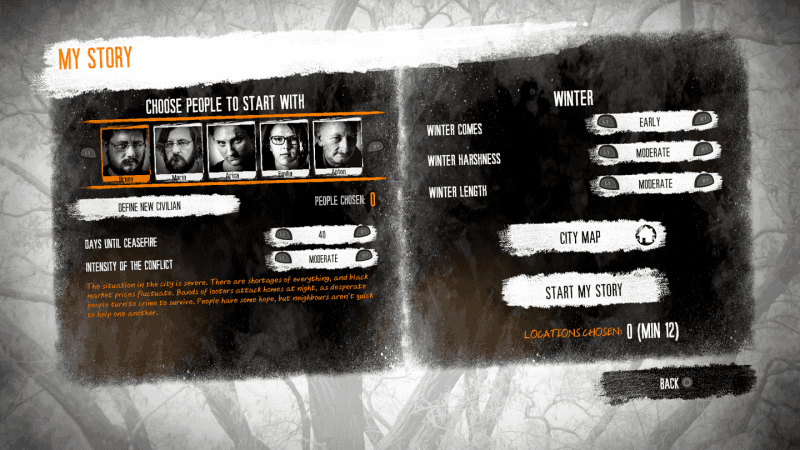 Each character has a set “skill” if you’d like to call it that. For example, some characters may run faster, some may have more space in their backpacks when you send them out to scavenge and things of that sort. Aside from this, you can also choose options making the game easier or harder on you. Like when winter comes, how long it last and how harsh it will be is an option. You can also choose how many days until the ceasefire ending the conflict and your story as well as how intense the conflict is ranging from low to high. But perhaps the most interesting of options in this mode is the option to “Define New Civilian”. Yup, you can create your own character…well sort of. You can choose their name, gender and occupation. There are 7 to choose from ranging from police officer to psychologist. They also offer a bio to these occupations. You get to choose your portrait which is used in game to show who you are controlling at the time. This as well as thier in game models, or “Physique” as it’s called, in the “Create a Character” option menu. 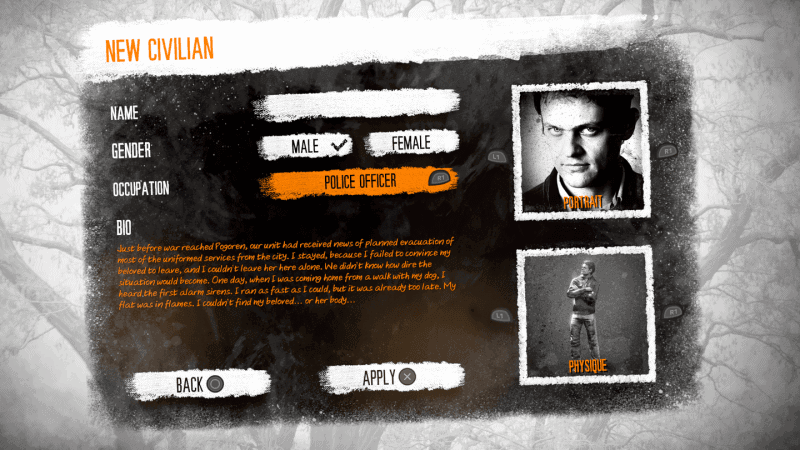 This puts a fresh spin on the game if you ever get tired of the randomized story option, or would prefer more or less of a challenge.

Kids are Kids, In War or Out of War.

This War of Mine The Little Ones offers something new that the original didn’t have…children. They cause you to change your priorities of what you need quite often. Kids need toys and to be able to play. They get sick and hungry more often than the adults. Overall, in my honest opinion, adding kids to the game makes the game feel even deeper than what it already was. 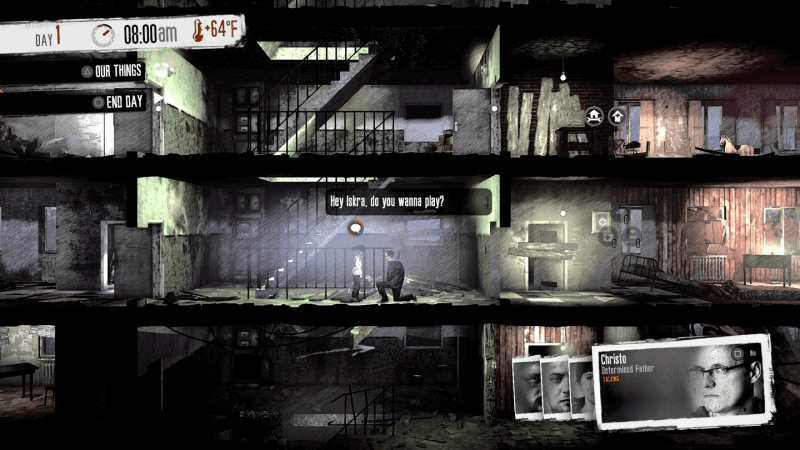 I mean, here you are in the middle of a war torn town, and you have to fend for yourself and the little ones as well. It’s not an easy task, but for the few in game days where things run smooth, it feels quite rewarding. They often will need to talk to the adults when they get sad or hurt. That will cut into time you may need to get water or upgrade something in your safehouse. The theme of this game is (if you haven’t guessed already) choose wisely and think carefully! 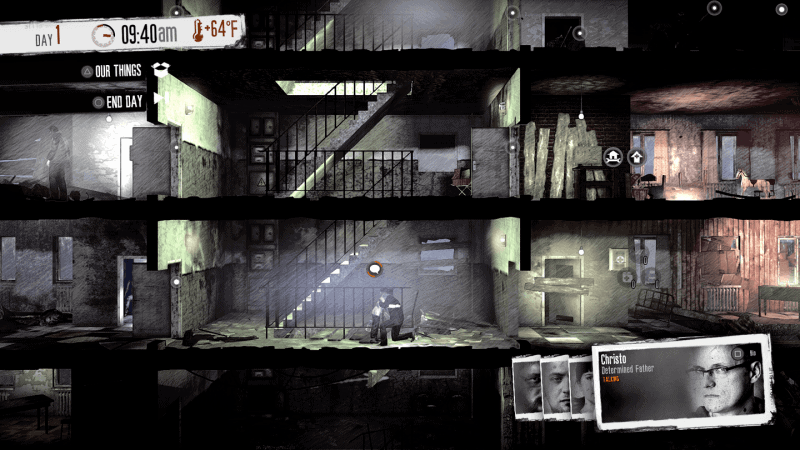 Be Sneaky, It’ll Save Your Life.

In the daytime you’re at your safehouse, upgrading workbenches, getting water, and taking care of your basic needs with whatever you have available. But the night, thats when things get rough. At night you are given the choice of who stays at home and who goes looking for food and supplies. You can choose to have everyone remain at home, but this is never a good idea. You also need to choose who sleeps and who guards. While you are away, your house my be raided and people are possibly harmed. They also may take some of your supplies. This puts something else for you to consider into play. Once you choose who is going to scavenge, you need to choose where they will be going and what they will be taking with them. You choose where to go by clicking one of the places on the map. Along with giving a basic idea of what can be found, it lets you know if it will be dangerous or not. Which is good for the simple fact that the less you have to take with you, means the more you can bring back. Once your at a spot it’s best to try and remain quiet. Walk slowly and hide in the shadows when necessary. You can of course tackle these situations anyway you see fit. I just found that stealth was the best option for me. If your character dies, it’s permanent. You won’t ever get them back. Not in this attempt at surviving anyways. You’ll have to start your survival attempt all over. If you are confronted often, they will warn you instead of just shooting at you, which is nice. This gives you a small amount of time to decide to leave or take them on.

Your mood is an important factor in surviving. If you are sad or depressed you may not have the will to live. The devs have implemented that quite nicely into the game. Often your characters may get sad or worse, depressed. If this happens it’s not a good thing. The character who becomes depressed will not be useable until they are out of depression. Keep in mind it’s simple things that truly makes everyone happy. Like music or a good story. Or Just relaxing in a confortable chair. The same goes for the characters in the game. Be sure to take good care of their needs, or you won’t survive.

When all is said and done, after a set amount of in game days (mine was 45 days) a ceasefire will happen. That’s it, you’ve survived! After that, you’ll be given sort of a story about your survival as well as an epilogue of what happened to the characters involved. It’s quite rewarding and sometimes heartbreaking. You truly do start to get attached to these characters. I won’t spoil any outcomes but know some are quite upsetting. 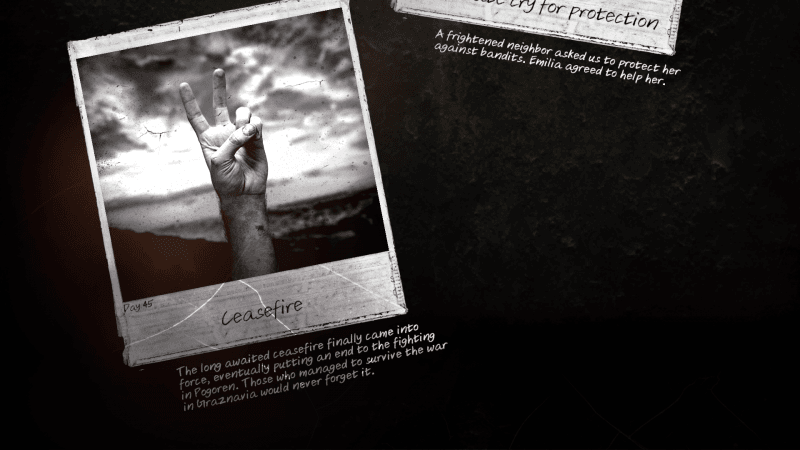 Where Do We Go From Here?

After your survival there is no new game plus or endless game mode that is unlocked. You’re only other option is to try another pre-set story or create your own. As fun and entertaining as the game is, after a decent amount of playthroughs, you may be done with the game. (I’m nowhere near being done or bored with it though). It would have been nice for the player to perhaps have an “endless survival” mode of some sort with it perhaps getting harder as time goes on. But I don’t think that’s what the devs over at 11 Bit Studios were trying to do. I think what they were trying to do was make a game that touches on more sensitive and serious matters. A game where you as the player truly were sucked in to the story. Where you felt like you were right there with them trying to survive. In a phrase, a truly deep and unique game. They have done that and more. I hope to see more games like this from 11 bit studios. I am truly happy that I had a chance to play and review this game. I hope that after reading, you’ll consider picking it up as well. It’s currently for PS4 and Xbox ONE for a suggested retail price of $29.99. I hope you’ve enjoyed reading my review as much as I have had the pleasure of writing it. As for the rating, This War of Mine The Little Ones gets a big 9/10.

Been gaming since I was 3 years old. I beat SMB for NES when I was 3 and continued to conquer games from then on out. My favorite console of all time would have to be the SNES. My favorite game would be a tie between The Legend of Zelda: A Link to the Past and Metal Gear Solid. I used to run support for Hyperkin's Game Genie for PS3 product on their official forums. I also used to write codes for the device. I'm now with another company on another device but I haven't been as involved as I'd liked to be. Time restraints & whatnot. I hope to continue my involvement with the gaming world in any way possible. You can find me on twitter @Gaarasaiyan, on facebook at facebook.com/Gaarasaiyan, and on twitch at twitch.tv/gaarasaiyan Anything else you guys want to know, feel free to ask.
@https://twitter.com/Gaarasaiyan
Previous Last Day of The Bandai Namco PSN Sale!!!!
Next Arslan The Warriors Of Legend Review