A game that I’ve been aware of since all of the way back on the original XBOX has been remade! Best of all, I got to review it after all of these years. It’s always a blast to play remakes and remasters for review purposes. People deserve to know if the original that they love is the way to keep playing it or if they should dabble in the newer release. Well don’t worry earthlings, I have a review of Destroy All Humans ($39.99, Black Forest Games/THQ Nordic) that will let you know if it’s worth the investment. Let’s jump into our saucer and GO! 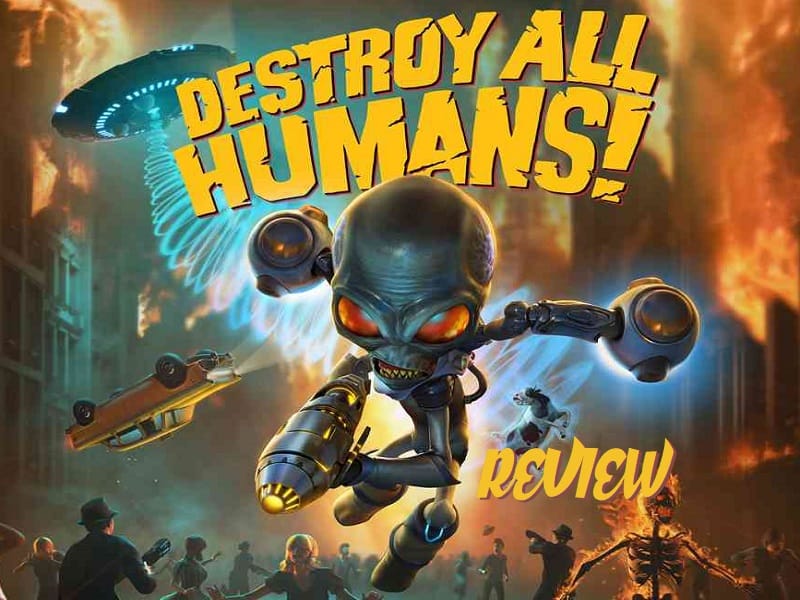 ‘The cult-classic returns! Terrorize the people of 1950’s Earth in the role of the evil alien Crypto-137. Harvest their DNA and bring down the US government in the faithful remake of the legendary alien invasion action adventure. Annihilate puny humans using an assortment of alien weaponry and psychic abilities. Reduce their cities to rubble with your flying Saucer! One giant step on mankind!’

Right out of the gate, let’s start with the voice acting. I know that they’re using the original audio files, as they should. But I wanted it to be known that even back in the original they had great voice actors. We have the great Richard Steven Horvitz as Orthopox. And the main character, Crypto 137, sounds like a Jack Nicholson type. I’m not certain if this is an homage to Mars Attacks or just a choice that J. Grant Albrecht went with of his own fruition. No matter how it got to the point that this is in, I love it and it should be praised more. The only downside with the voiceovers is for whatever reason when listening through my official XBOX One headphones, Crypto’s voice sounds a bit tinnier than Pox’s does. This is nothing that I noticed on my surround sound though. It is curious, however. Is it because of the original recording being bad and I never noticed or is it because they compressed Crypto’s lines to fit? Who knows.
I was very surprised to also hear a lot of fantastic background sounds. Lots of ambient “white noise”. Most games don’t have birds chirping, roosters crowing, the wind blowing, and other such sounds in them. Each level has ambient background sounds that do not distract or take away from the experience. It’s almost to fill the empty sound until the music picks up during more eventful sequences.
With regard to the looks, I love the overhauled menus and HUDs especially. They make this game far more useable on our modern-day TV’s that are larger, more rectangular, and the print is crystal clear. There are downsides to this remake. Since the bones of the game are still the original title we get some obvious issues. The gameplay is broken up by what I can only say is an unfortunate amount of loading screens and spinning save icons. Worlds look incredible on modern consoles otherwise though. If they could find a way to mitigate the loading screens, pauses, and hiccups, the beauty of this hokey sci-fi game would shine through so much more. 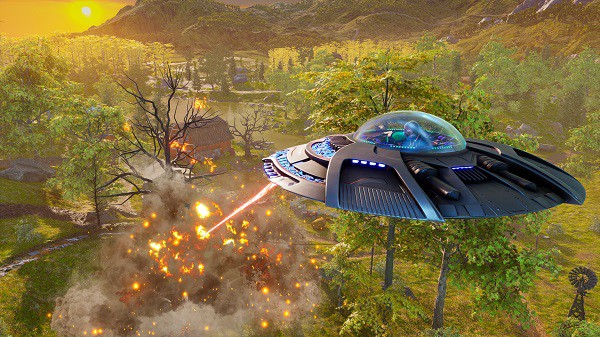 In this game, you get some truly long and humorous cutscenes. Now, without spoiling too much, you find out that the game is all about the Furon race getting back to their roots…by harvesting human DNA. Now that isn’t the sole focus of this game, of course, but you need to start there to really get the saucer rolling.

In this invasion game, you’ve got a lot of items at your disposal. To list just a few, you have a raygun, with several abilities. You’ve got telekinesis at your disposal.  There is also a jump mechanic that if you hold the button, you’ll fly around using a jetpack. Another useful mechanic you’ll find is that you can also dodge at a moment’s notice. On the opposite side of you dealing damage, you can also receive damage from people shooting at you but also if you touch bodies of water (even puddles). One of my favorite mechanics is harvesting. Not like Harvest Moon, oh no. Instead, you yank people’s brains out after killing them. This is done for several reasons, but in-game, it increases the charge time of your health meter. The key is to keep it from emptying entirely.
Of course, you have no invasion game without manning a flying saucer. The saucer comes equipped with the ability to shoot a laser straight ahead of you. You can adjust it to shoot below you as well. This looks like something out of Independence Day, a really nice touch. If you need to charge your saucer’s shields, you can drain the enemies/vehicles on the ground the same way you take the brains of humans. Speaking of taking their brains. If you collect enough brains, you can then use the DNA for upgrades. They can upgrade things like your raygun, dash, the anal probe, and much more. There are also upgrades for your ship as well, which makes it improved in fun ways (no spoilers).
There is an element of stealth to the game, mind you. It isn’t all just run and gun the humans. If you’re trying to avoid certain parties, the game has an eye icon that changes color depending on the level of detection. If you show signs of alien “activity” then that also alerts the enemies of your presence. Alerts can be made by enemies that escape you and tell others. Just like a health meter, this can not reach a certain point otherwise it’s a failed mission. The best part of the game, in my opinion, is the body-snatching. Some levels have you not kill any humans. Instead, you need to move more undetected.
Snatching a body will increase the likelihood of being stealthy. If you don’t want to steal their body, but just want to keep them from ratting you out, you can wipe their memory too. You have to keep up the hologram of the snatched body. Feel free to still do alien abilities, but be aware it affects your hologram. It will decrease sooner if you do those actions. If humans see you, feel free to destroy them or use “Forget” and that revitalizes more of your hologram. 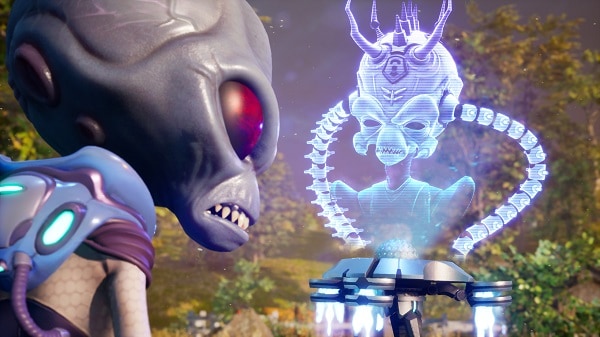 The first thing that really jumped out at me was the extras in this game. There is much more longevity than it’s original counterpart. Each level has challenges on top of the goals of the main campaign. You’ll be able to further unlock skins for your character as well as other fun goodies that the developers added into the remake! More challenges also net you more chances for DNA extraction which in turn helps you unlock more upgrades. The only thing I will say here is that I would’ve loved to have seen them just bake the first two Destroy All Humans games into one $60 package. Not that this is bad, but imagine how much time you could’ve spent on earth destroying all of those pesky chimpanzees! 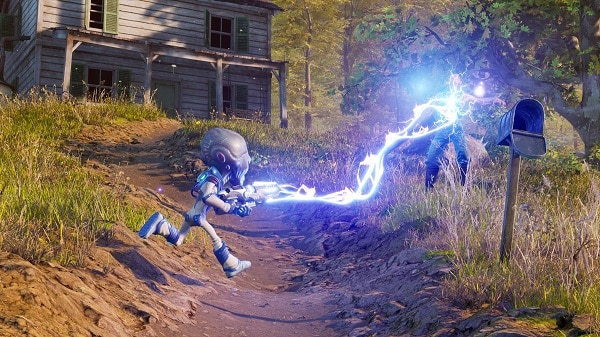 Hands down, whether you have or haven’t played the original, play this game. See how I italicized the words so you get the importance of what I’m saying. The emphasis is all there. This title has you flying saucers, zapping humans (in a variety of ways), sucking out their brains, using telekinesis. Even copying and using human bodies is on the table! This game has many quality of life improvements over the original that make it more modern. So if you’re back for more, you won’t miss the original’s HUD. If you’re here for the first time, Destroy All Humans will feel right at home alongside your other modern titles. It’s just plain, hilarious fun! …Now if only we could get them to remake DAH2, DAH Big Willy Unleashed, and DAH Path of the Furon… 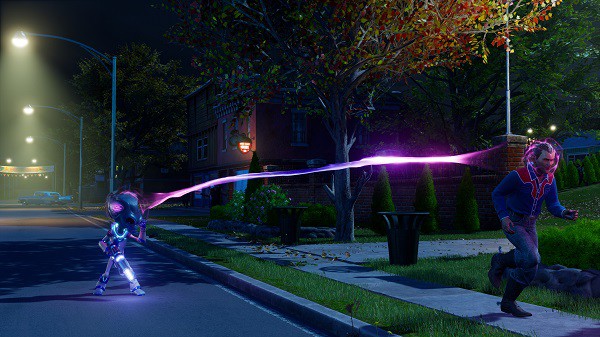 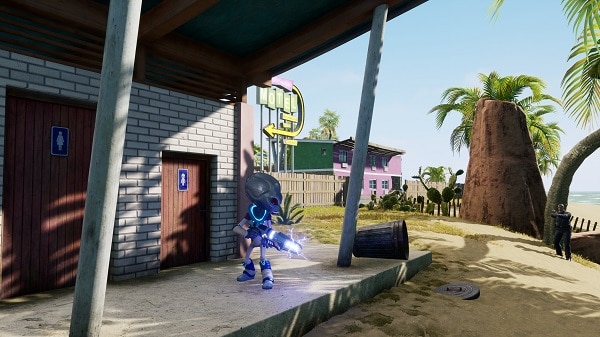 @V1RACY
Previous The Original Playstation 1 gets the optical drive emulator treatment!
Next How To: Install PNP GCLoader and SD2SP2 Into Gamecube