Today’s review is a sequel of sorts to SUPERHOT. SUPERHOT:Mind Control Delete (SUPERHOT Team, $24.99) is being released as its own standalone game. It’s not a VR game like the previous release. Instead it is able to be downloaded and played on its own. That’s right, you don’t have to buy the original SUPERHOT in order to play this new game as it’s not DLC or an expansion. So as someone who loves everything SUPERHOT, I’ll do my best to review just this title and not compare it to the previous releases. But for those who love the original, I’ll let you know in the “Overall Thoughts” section if I believe that this newbie can satisfy as well as the first one. Let’s dive in!

’SUPERHOT: MIND CONTROL DELETE is a full-featured, standalone game set in the SUPERHOT universe. Still outnumbered, still outgunned. Enemies swirl around you in a storm of slow-motion violence. Battle after battle, each fallen foe pushes you closer to the secrets hiding in the game. You feel an obsession set in. Good, it’s just a game. Good, you can just stop. The third game in the SUPERHOT franchise – MIND CONTROL DELETE gives you more insight into the world of SUPERHOT, more story, more signature gameplay. Keep dancing the slow-motion ballet of destruction for so much longer than ever before.’

‘MIND CONTROL DELETE​ gives you more​ ​insight into the world of ​SUPERHOT,​ more story, more​ ​signature gameplay. What started as a free DLC is now something significantly MORE:

-Much (Much) Bigger ​than its predecessors. MCD immerses you in its world for days of increasingly explosive slow-motion combat. MCD is over 4x the size of SUPERHOT.

-More Mechanics ​at your disposal than ever before. Master different play styles, different character builds, different ways to outsmart and dominate your enemies.

-More Power ​to accumulate as you progress through the game. Amass new skills, new hacks, special techniques to conquer waves of ever more dangerous enemies.

-More Characters ​for you to control and more enemies to fight. Test your arsenal of tricks and weapons against increasingly deadlier, smarter foes.

Obviously, this game is way more about visuals than sound. It’s actually more about the absence of sound as it were. Those moments in between your movement where you need to figure out your next move are almost entirely silent. The sound slows to a crawl the same way the enemies do. And when you’re actually moving, you do get great sound. Whether it’s the shots fired, the sound of shattering enemies, or the crisp sound of the gun letting you know it’s time to shoot again. This game doesn’t feature too much music. However, there is a disco level that you fight in that’s playing an almost intentionally obnoxious song. When you stop, it slowly creeps along and when you go, it goes back to be a loud EDM track to try to both distract and inspire you. All in all, the game sounds superb.

The visuals are always my favorite part of the SUPERHOT experience. When you start the game, the menus and overworld are an homage to hacking systems of old, maybe Apple II days. Either way, the menus are supposed to be as if you’re being fed information through a computer screen. When you get into the meat and potatoes of the action though, the game is a visual feast of colors. The worlds are white around you, the interactable objects are a stark opposite [black], and the enemies are shades of red. All of the enemies and objects you can hold seem to have a misaligned polygon effect. The white level seems to be made with much better precision, though some levels have interesting elements to them if you pay attention. I’m running the game on my XBOX One X, so it plays and looks so smooth. I wouldn’t play it any other way (except maybe on the Switch). 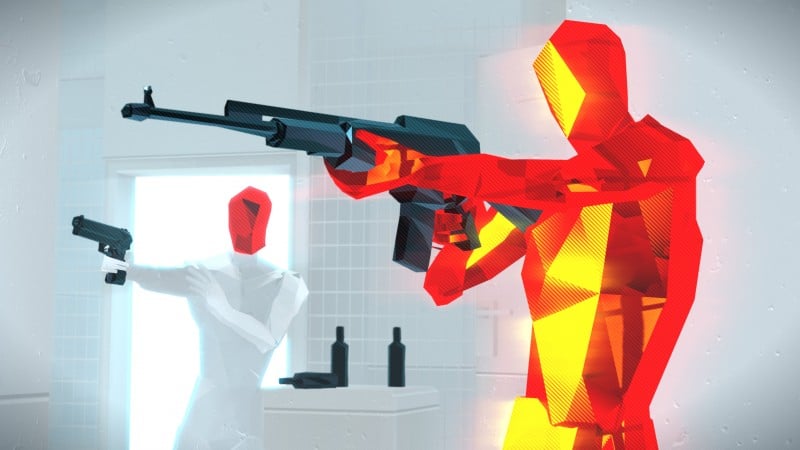 First, let me explain how the game works. Basically, time only moves when you do. Or at least it moves at an INCREDIBLY slow pace until you move. Time does technically move, so don’t think you can leave the game unpaused to go get a cup of coffee. You’ll come back dead.

Your character is black and you can interact with anything that is black. So if you see a black item somewhere, you can pick it up and pick it up if you’re close enough. Once in your hands, you can then use it however it will be used. You can also punch or throw stationary objects to stun as well as beat people with blunt objects (some deteriorate with use). There are guns to fire at enemies. You can also throw weapons at the enemy for various reasons. This might be if your gun is out of ammo. It could also be that the blunt object you have doesn’t have much life left. Or maybe you just want to disarm an enemy (assuming they’re holding one that can be dropped). You just have to make the thrown object connect with the adversary. You then clear the area of the red bad guys without getting hit once and that’s how the game works.

The new game starts out that way and then after 15 minutes gives you a “The End” and a credit sequence. After the credit sequence, without giving away too much of the game, is where the game really changes. First off, you’re now given three lives instead of needing to not get hit even once. They let you play through a set of levels like that so you get used to it. After that, the game evolves even further with hacks.

Hacks are given that you can use to increase different aspects of yourself. Certain game levels let you choose between hacks. Such as adding an extra life or two to your three hearts. Or you can have every level start with a katana. Or reducing the delay between shots you can fire. Refilling all hearts is another one I love. You can also start levels with a random firearm. There are more than that and you unlock more as you play through the game as well. Unlocking more incentivizes you to push on deeper. It’s up to you to choose the hacks that best suit you based on what the game offers. The hacks stack the further you make it, but even better is that there are hacks for both offense and defense.
Previously, the levels were just given to you linearly. In the bulk of SUPERHOT MCD, it is different. You instead work your way through an overworld map, each section is known as a node. Each node unlocks a hexadecimal screen that is used as a loading screen of sorts but tells you which level theme you’re doing next. Each node uses can use an already known level differently, putting you in different points within a specifically themed level. In between the nodes, there is code to decrypt to indulge you in more of the story. When you’re playing through any given level, the aim is to take out 5 enemies. The goal is no longer to clear the entire level of enemies.
Levels are interesting as you’ll find yourself in places like casinos, mansions, discos (with custom movement), parking lot, morgues, and even the sewer. With the sewer, the level really changes the gameplay. When you are in the water with the flow of the water, you move faster. If an enemy drops a weapon in the water, it’s gone for good. Make sure you catch what they drop before it goes under. Anyway, there’s a lot of levels, way more than I mentioned here. It’s fun to see where you’ll be.
In the first handful of nodes, you’ll find that enemies start off by being basic. You shoot, punch, or throw something at them, they’ll get hurt and drop what they have for the taking. As the nodes unlock more difficulty, things change. Some enemies have weaponry that dies with them whether they have spawned with it or they pick it up and it becomes part of them. Certain enemies can only be hurt via their heads and the body is invincible. It’s really genius the mixing and matching that the developers put in here. Not just the enemies, but the locations, and the placement of the interactable objects. 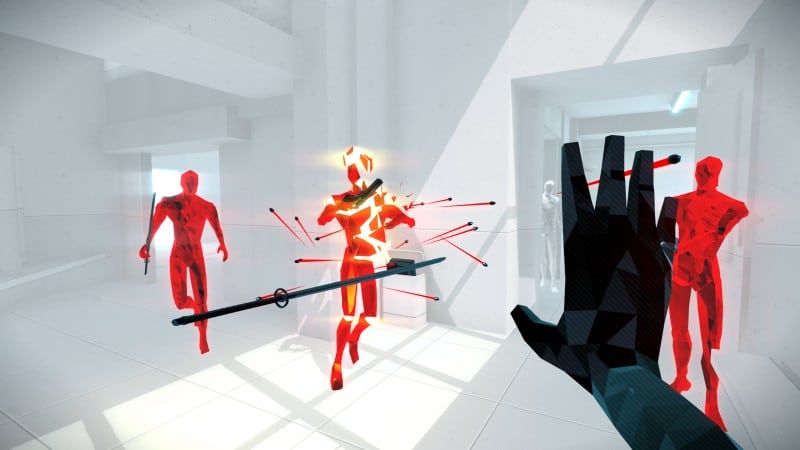 This game is crazy long. I don’t even know if you’d want to replay it again after beating it. But you certainly can, that’s for sure. It’s very randomized in each node. For instance, if you run out of all of your hearts, the hearts refill, but you start again at the beginning of the node. That can be a bummer because each node seems to have six levels contained within it. So it’s very much like running in place sometimes (for lack of a better metaphor). I think that this game is so incredibly fantastic that I felt satisfied when I was finished with it. It’s the most challenging and engaging SUPERHOT to date and I would think that more content would only confuse or muddy the game. This game is the perfect package as a one and done! 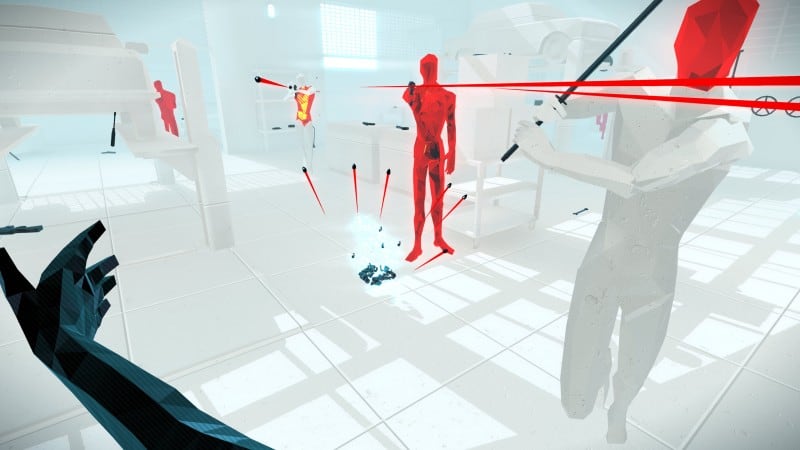 For those who’ve played the first SUPERHOT, you’re in for a treat. The game starts off with more of the same great gameplay the first one had. You’ll find that you slip right back into it without needing instructions. It slowly introduces the changes. By the end of the game, you won’t be able to go back to the original game as it will seem way too easy. If you’re new to the series and start with SUPERHOT MCD, I fear you may not enjoy the original as much if you play it after. Buy both (and SUPERHOT VR) but play them in order of release. Basically. This game is for those who either love difficult games or have played through the first SUPERHOT and want even more challenge. In the immortal words of Destiny’s Child, “I don’t think you can handle this.” 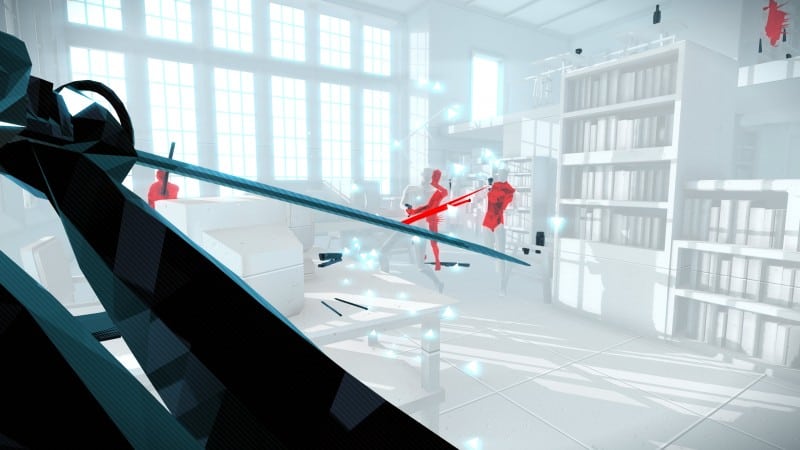 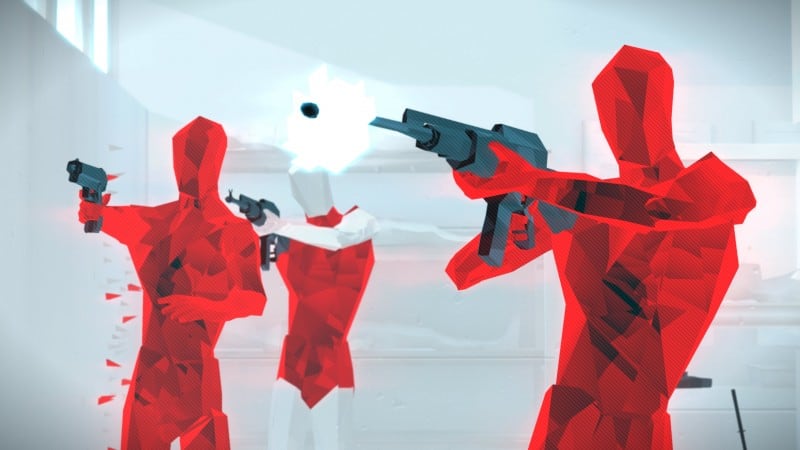 @V1RACY
Previous PS1 digital coming soon for the original PlayStation console!
Next Helpful tips on finding a PS4 on 6.72 or a lower firmware!