Review: The Legend of Heroes: Trails of Cold Steel III

School is back in session! A new year begins again at Thors Military Academy. However, this time, some things have changed as our story starts anew. Join Rean Schwarzer as he begins his new role of being the instructor of the new Class VII at the newly established Thors Military Academy – Branch Campus. Will Rean have a typical year as an instructor, or will new Class VII under his guidance undergo adversities in the ever-changing world of Erebonia?  Join us as we go through our orientation exercise for the review of The Legend of Heroes: Trails of Cold Steel III! 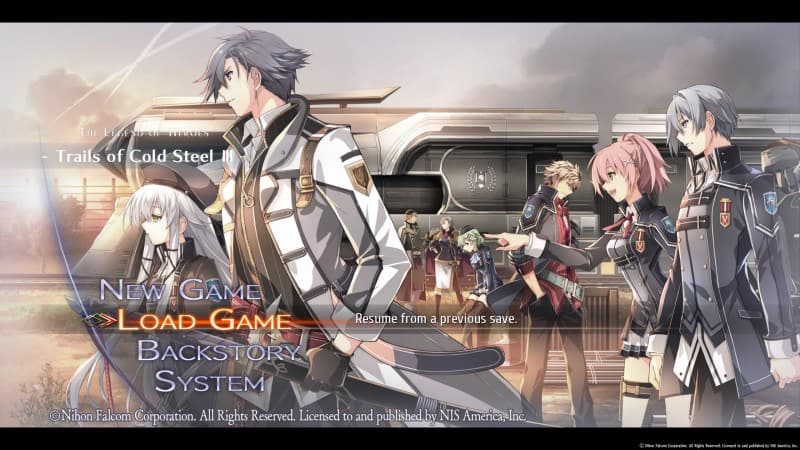 *Thank you to NISA PR for providing a review key!* 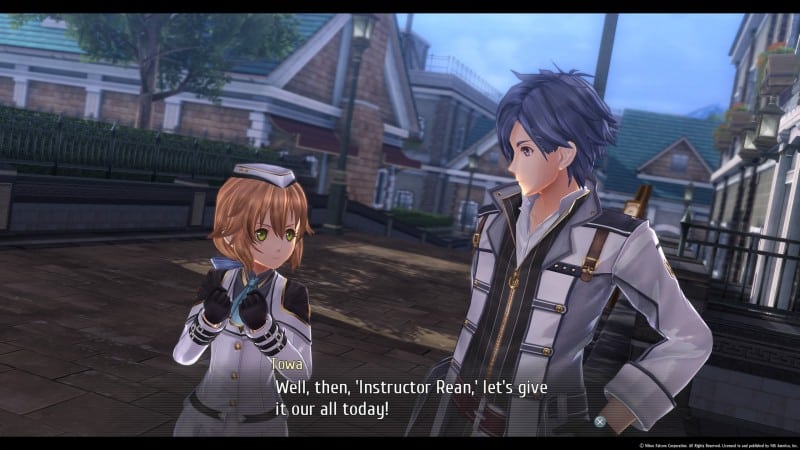 Nearly a year and a half has passed since the Erebonian civil war, and much has changed since then. From the shifting stances of countries to the internal politics of the Empire and even the life of Rean Schwarzer, the shadows of the past have given way to the embers of a new chapter. Now graduated from Thors Military Academy, Rean has become an instructor at the Thors Branch Campus, a newly-opened academy that quickly finds itself thrust onto the national stage. It is here that he takes the lead of a brand new Class VII, and must guide a new generation of heroes into an unknown future. Though all is calm now, the nefarious Ouroboros organization continues to weave a dark plot that could engulf the entire continent in war…or perhaps something even more sinister. 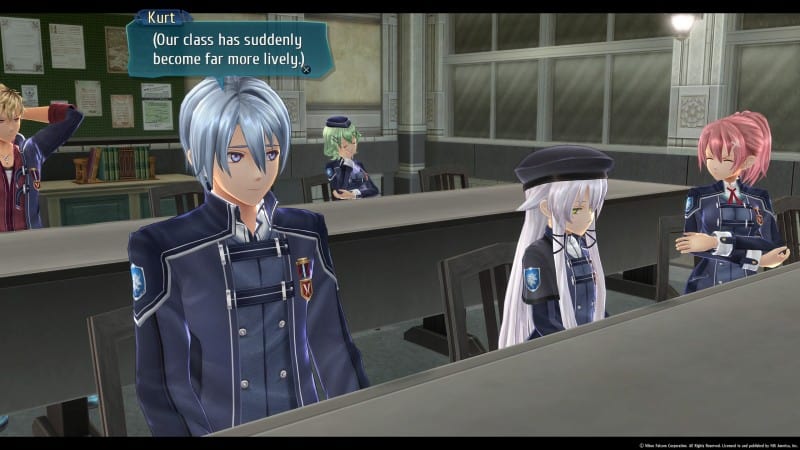 Trails of Cold Steel III follows the life of Rean Schwarzer in a much different life playing the role of the instructor at the campus and the role of the Ashen Chevalier. Throughout his journey and guiding the new Class VII, the story of how the world has changed will begin to take shape. Throughout these changes, it will be up to Rean to guide his class to learn about the world through their actions. 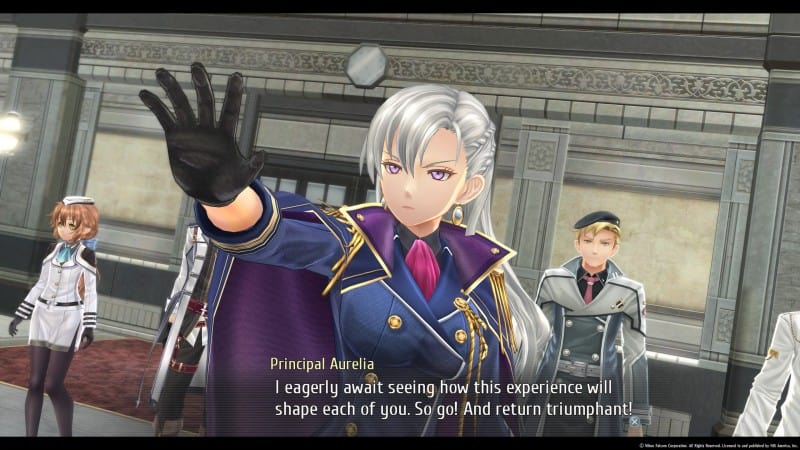 Trails of Cold Steel III doesn’t just follow Class VII and the teaching life of Rean. As the world continues to change, Rean will learn about the real dangers that lie in wait and a threat that is more than anyone anticipated waiting in the dark. This will intertwine with those Rean had encountered in the previous games, aka the old Class VII and those that supported them. Rean will learn what everyone has done since graduation, and as the story takes shape, how everything will become intertwined. 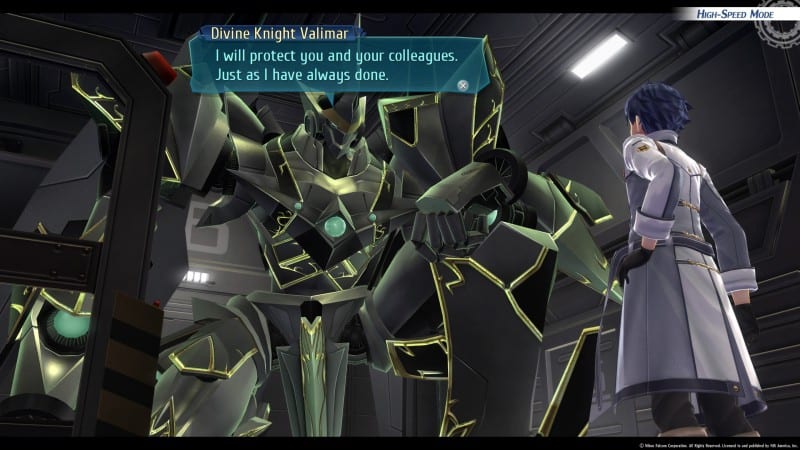 I am only speaking on my behalf here. My first entries into The Legend of Heroes Franchise was with Cold Steel 1 on the PS Vita on Release. To be upfront, I only played Cold Steel 1 and 2. I have zero issues, as this is the third in this particular arc (Erebonia). The problem that lies in this is that, while it is the 3rd entry of the Cold Steel Saga, many common threads from the other Legend of Heroes games meet or interlope in Cold Steel III. This will include several characters from other games in the franchise as a whole that will appear. 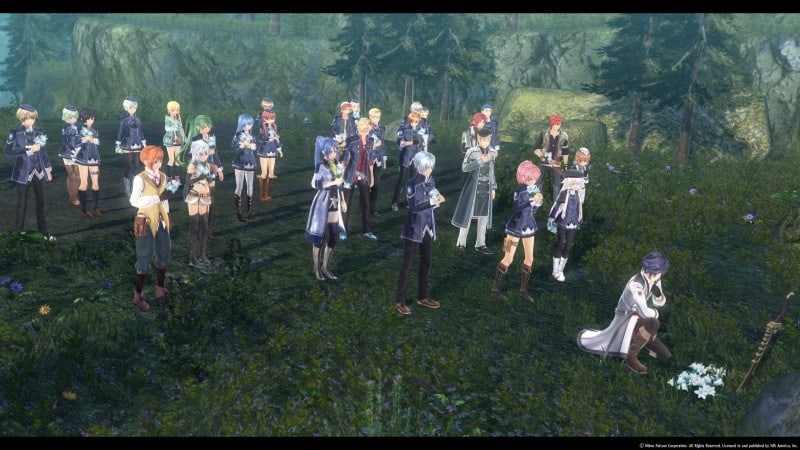 While the game does not give you their full story upfront, Cold Steel III gives you enough information to keep it relevant for the Cold Steel Saga. If you are like me and Cold Steel 1 was your entry point, and you only played the Cold Steel games, Cold Steel III does more than enough. You get a general idea as to who they are and what their role was in the past games from other Arcs in this franchise that has spawned for nearly five different games (two of which are not officially translated yet). 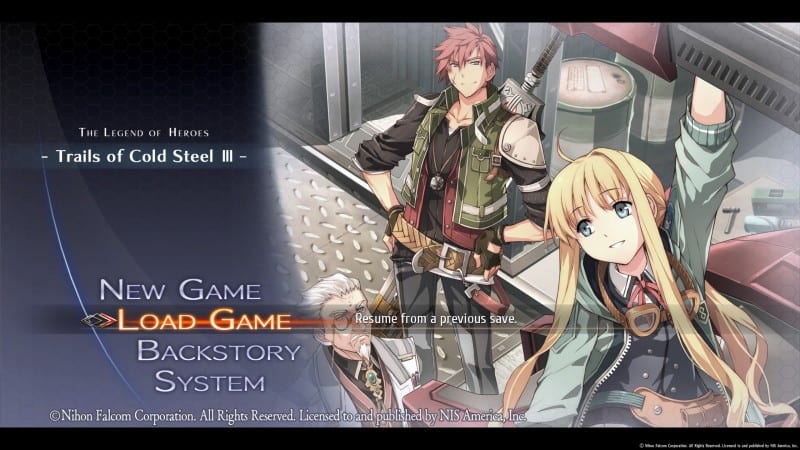 However, this also leads to several questions. I do not see this as a negative. The Legend of Heroes franchise has spawned several amazing games and well-crafted stories in gaming to date. So when I encounter protagonists from other games in the franchise, I want to research who belongs to what game and play their titles. I can easily say that Trails of Cold Steel III has become a gateway for me to explore other titles outside of the Erebonia Arc. 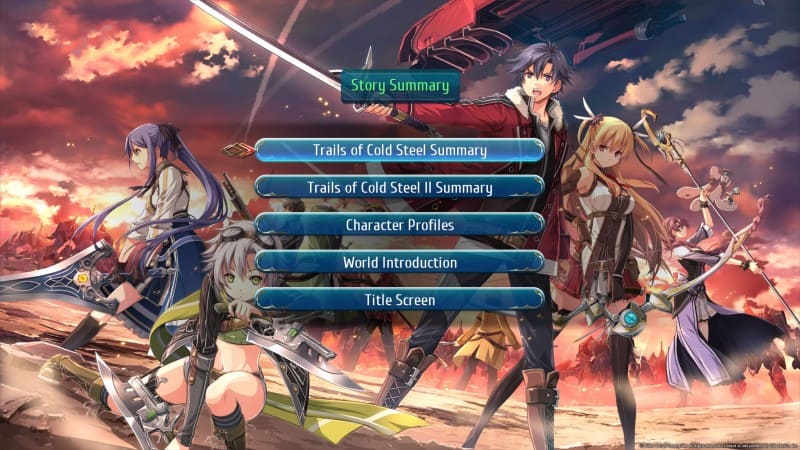 One thing I do not recommend, which does not go straight into Cold Steel III. I REPEAT,  DO NOT JUMP STRAIGHT INTO COLD STEEL III. At the very least, this game has a Back Story section on the main menu. This section gives a thorough telling of the previous two Cold Steel titles, essential characters, and an overview of the history of the games. I recommend browsing this at the very least. I am not saying you will not get any enjoyment if you jump straight in, but you will be lost more or less up to a certain point. The BackStory section gives an excellent need to know guide for up until this point (outside of a wiki page) 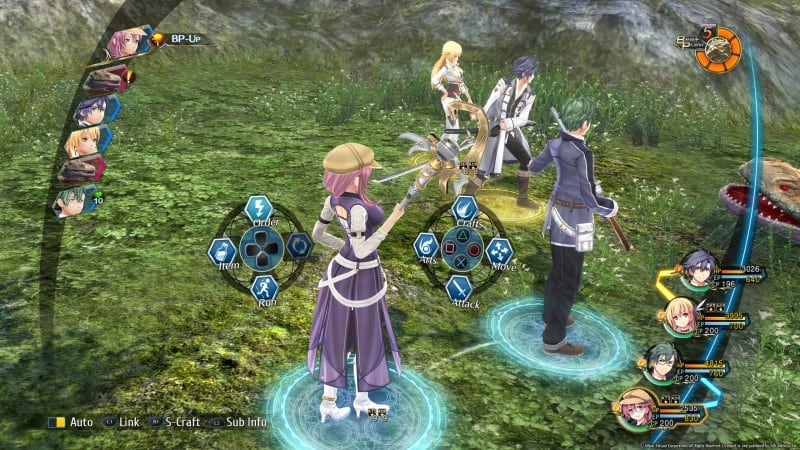 The gameplay is virtually intact from previous entries in Trails of Cold Steel III. The only difference now is improving upon the past formulas and well-polishing it. The battle menu is completely mainstreamed, which leads to usually pressing 2-3 buttons per turn (for example, press button for action, choose action, choose target). It makes battles flow smoother. In addition to the new mechanics which incorporates the “Brave Order” system to issue squad formations, the battle system for Cold Steel III is the same as the previous titles. 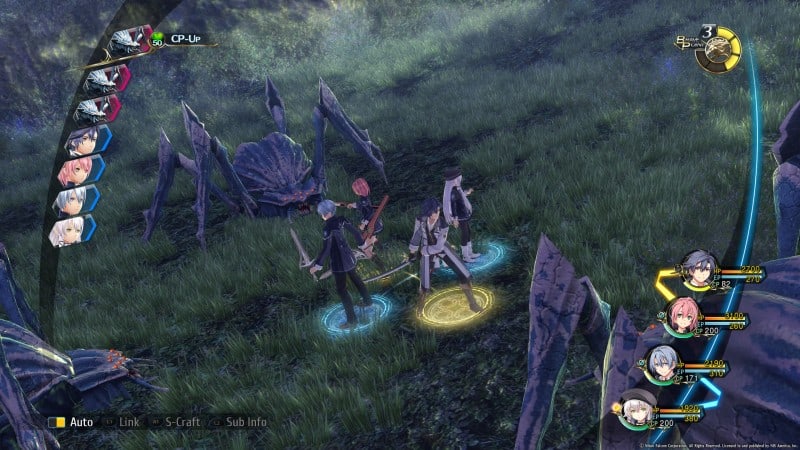 Gameplay outside of battles is also the same.  As in Trails of Cold Steel II, there is a high-speed mode, which turns a 30 FPS game to an insanely fast-playing video game. High-Speed Mode will most likely cut the gameplay time in half if implemented from the start of the game. Some new improvements have been made in Trails of Cold Steel III compared to past titles. One is the introduction of the Arcus II, which is used outside of combat now. Another one is the simplifying of the fishing mini-game. A new change instead of the Blade card game is the Vantage Masters Card game. 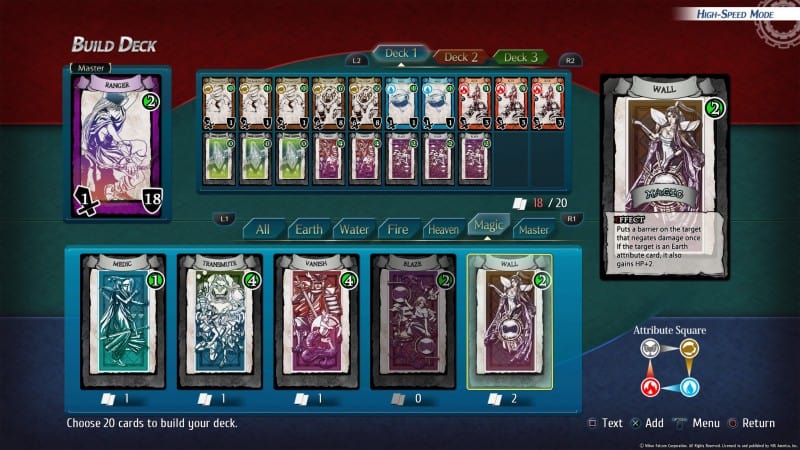 One thing I can say about the Trail of Cold Steel games, it follows the formula of “if it isn’t broken, no need to mess with it.” The past games had no issues in the gameplay department. As a result, Trails of Cold Steel III takes that and only improves it. The result is a very polished title.

Audio-wise, The Soundtrack for Trails of Cold Steel III is fantastic. Each track is masterfully done and applied at the best moment in the game for maximum immersion. It adds to the overall ambiance of what is being delivered in terms of the gameplay. The cast of the previous Cold Steel titles (both English and Japanese) all reprises their roles for Trails of Cold Steel III (except for Millium’s VA from CS 1 and CS 2). That is also improved as the delivery of the voices now has a tone that underlines the experiences they underwent through the previous titles.

It is rather impressive because usually, games with multiple sequels do not deliver this kind of tone. Trails of Cold Steel nails it. Additionally, the new characters introduced in Cold Steel III (some of which are from other entries in the franchise) are well done too. Hats off to the voice actors who dedicated time to their craft and using that talent to do each character in the game justice.  This is said for both the English and Japanese voice acting for the game. Hats off to both teams for a great job well done.

Sidenote: While there is an option for English or Japanese voice-over languages, there is only text language available in English or French. I wonder why Japanese text is not an option. It might be patched in eventually, but for not, those are the only available text options.

Visual-wise, The game looks similar to the past Cold Steel PS4/PC Ports. The game was built specifically on the Playstation 4, so the visuals do make sense in this regard. This is not an issue as they are gorgeous to look at as Class VII travels through the world of Erebonia. 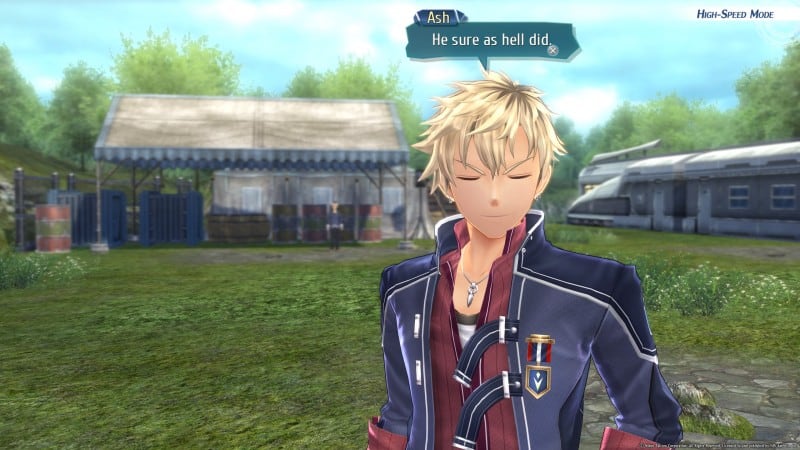 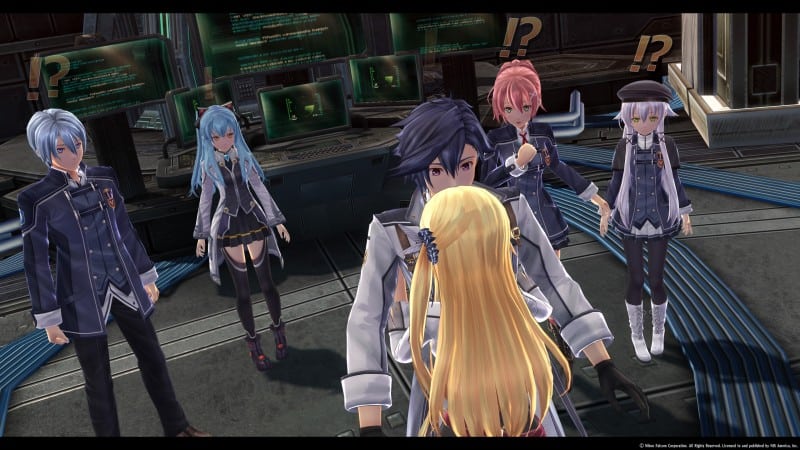 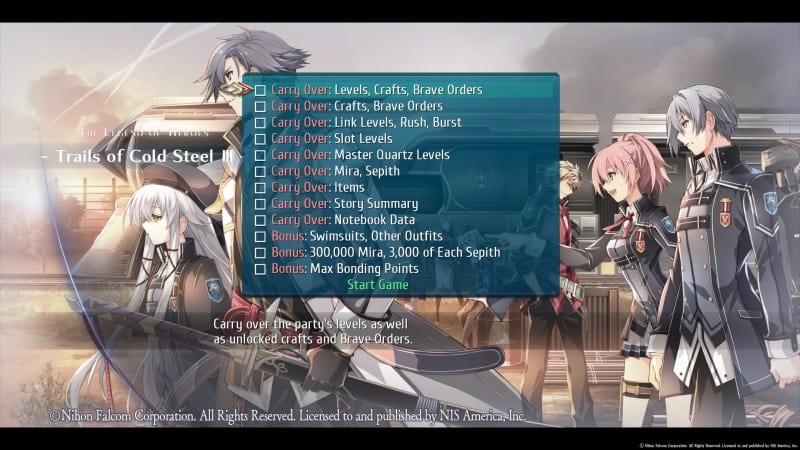 Like previous titles, there is only a handful of things to accomplish in NG+, but they are minor. However, Carryover data (from completing the game once to NG+) exists. Unlike the previous titles, you can carry over everything listed going into NG+. 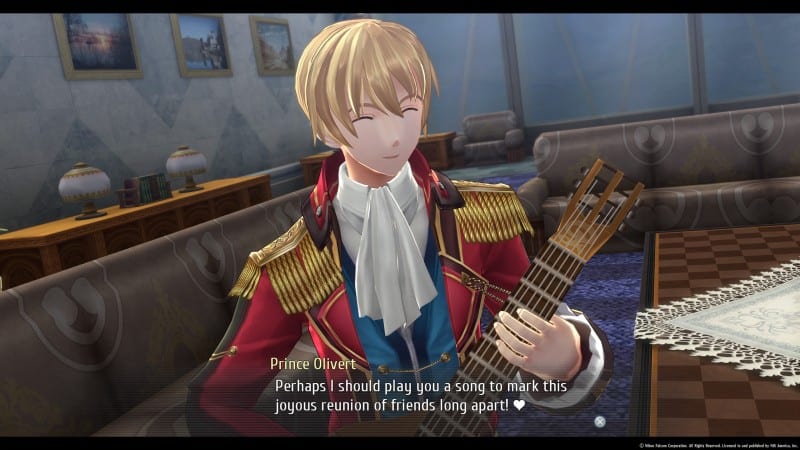 Trails of Cold Steel III is a damn fun game. Not much more to say about that. I put over 100 hours into the game and am currently into the journey of a Platinum Trophy run. This is easily my Game of the Year for 2019. It has been a long time that a game (RPG no less) that has had me fully immersed. Cold Steel III now has me investigating other games in the previous entries of the franchise. This may also lead to playing those titles. I am also looking up a translation guide for Cold Steel IV. This will lead to importing the game eventually thanks to the positive experience with Cold Steel III. 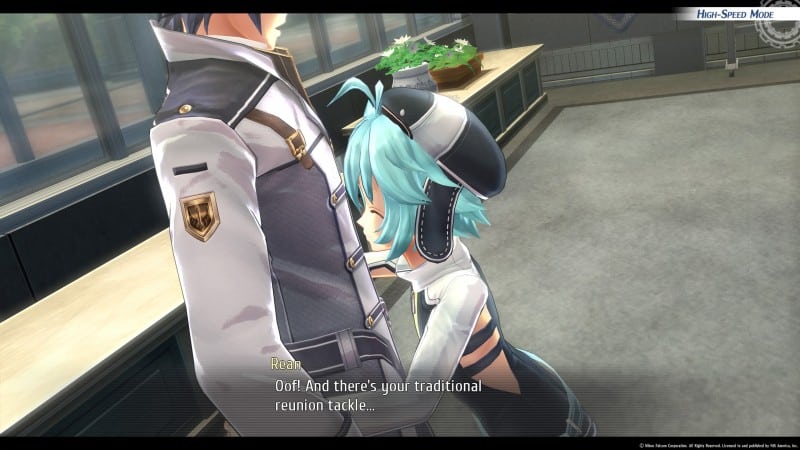 The Legend of Heroes: Trails of Cold Steel III is my game of the year for 2019 so far. With only two more months left in the year, it will be nearly impossible to top this experience. The ending has me wanting to replay the game. This includes importing the final game in the Erebonia Saga (since Cold Steel IV has not been given a U.S. Release confirmation yet). I enjoyed every aspect of the game. From the character interactions, gameplay, and Story, Trails of Cold Steel III is fantastic. With minor problems, there is nothing that deterred me from my experience in the game. 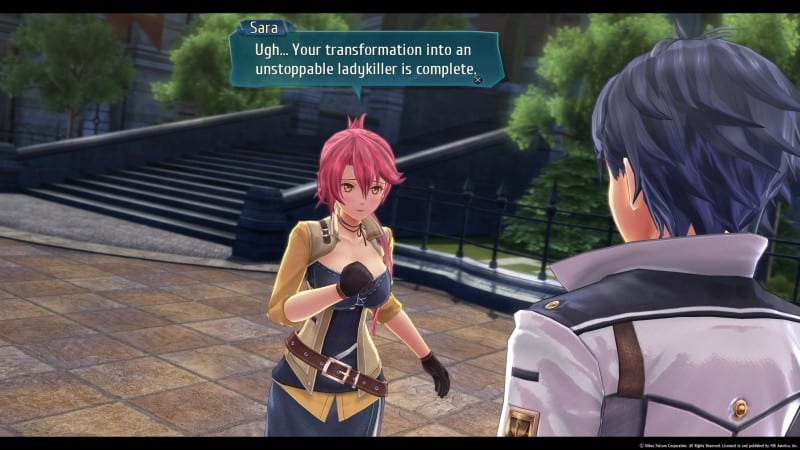 As a huge RPG fan in general, it is a rarity that a game has me this immersed. The last RPG that has gripped me like this was most likely Persona 5.  I hold that game in my top 5 titles of all time. Trails of Cold Steel III is that good, and I look forward to Cold Steel IV more now. One thing I would personally love is if the Legend of Heroes games come to the Nintendo Switch. 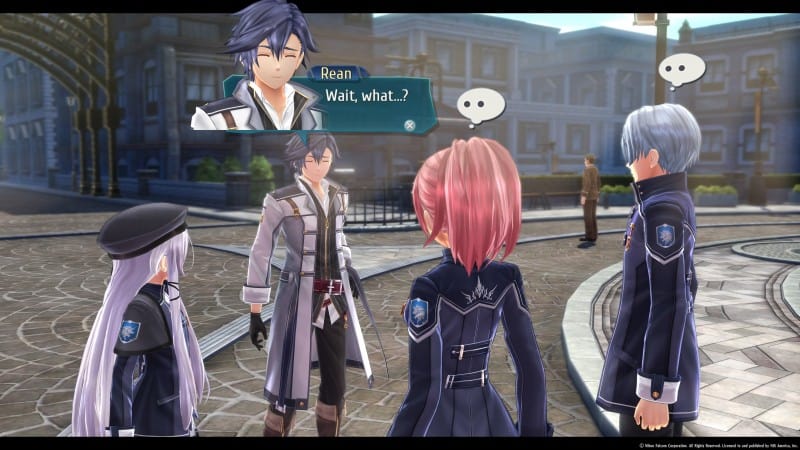 Personal wants aside, Trails of Cold Steel III has something every type of gamer can enjoy in it. The developers put a great deal of love and care into the game. However, this can be said for every The Legend of Heroes title. This is a franchise that does get overlooked compared to other RPGs. I recommend getting into this franchise whenever possible. However, I do not recommend getting into Cold Steel III unless you have a basic understanding of the previous CS games. Thanks to the backstory section in this game, you can get caught up just fine and rather quick.