Recently, I purchased a Final Fight arcade machine from Walmart as they went on sale for $50. This was exciting for so many reasons, but mainly the price was finally right for me to purchase one. If you want to read my review on it, click here. If you just got one and need help assembling it, click here. But if you already have one and it’s assembled and you’ve played about all that you can of the games on it, you may be ready for more games. You’re probably ready to upgrade the hardware from the stock buttons to some new buttons and sticks that will hold up. Heck, you may even be crazing a dose of LED’s in your machine. Well, ArcadeModUp’s Mod Kit bundle has those things! What does it include, how simple is the installation, and is it just generally worth it? We’ll cover all of this and more right now! 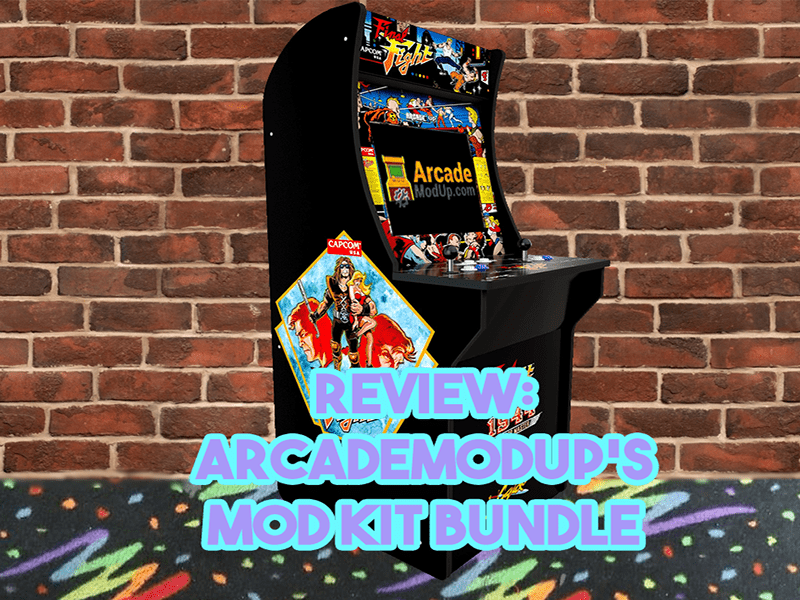 ‘Arcade1Up Mod Kit is complete with everything you need to upgrade your Arcade1Up machine in an easy drop-in kit… Supports 2 or 4 players on ALL Arcade 1 Up Cabinets.’

Just as an aside, I mentioned that there were more features for the control deck. I wanted to talk about those extra features that were not on my mod kit. I also wanted to quickly cover what else the site has. It’s worth noting that any of the parts mentioned in the mod kit are also purchasable individually. So if you already have your own Raspberry Pi setup and just want a light up marquee, you can get that through ArcadeModUp. I also want to cover the fact that you can remove some aspects of the mod kit if you don’t need them.

A lot of thought has gone into these, there’s no denying that. ArcadeModUp takes a lot of the guesswork out of the equation. When it comes to installation, your Arcade1Up will be modded and functional within an hour. Seriously, I recorded an hour of me installing it all, but I was messing around. When I edited the video down, I was only in the weeds for twenty minutes. That means you’ll probably be playing even sooner than an hour. This whole setup feels great, it looks great, and it has a feeling of longevity to it. The only downside I truly felt is that if a button broke (maybe from food/drink), they don’t have an option to buy individual buttons. The same goes for speakers, all of those only come in sets. It would be great to be able to buy a single speaker (in my case) or a single button. Other than that, I’m incredibly impressed with what ArcadeModUp brings to the table and I’m confident that you will be too!

If you already have one of these, or are just now ordering it, or have one en route; we have instructions for installation for you. Click here to check it out!