We’ve got another new game review lined up for you all! We’re going to be covering in detail Riddled Corpses EX ($9.99, Diabolical Mind, Cowcat). This game has worked its way around to the various platforms and I got my hands on a copy for XBOX One, so we’ll be reviewing that version today. We’ll have links to all available versions at the end of the article. So if you’re into twin-stick shooters, then get your thumbs ready, because here we go! 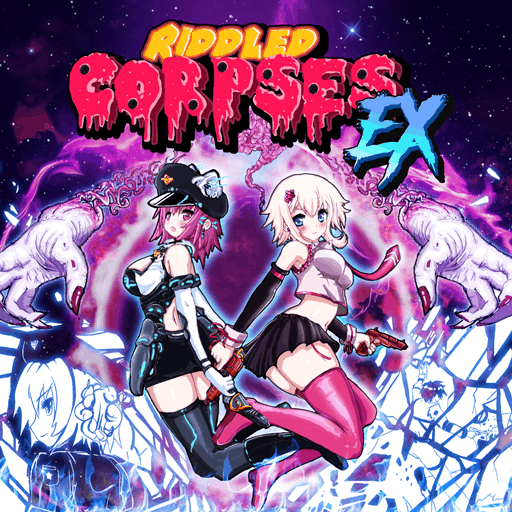 ‘Riddled Corpses EX is a twin-stick shooter made in the style of 8/16 bit arcade games. Alone or with a friend, travel through diverse locations packed with danger and huge bosses. Choose your character wisely and make good use of their abilities and the special items to progress and destroy the root of evil!’

As you can tell from the trailer, the audio is very much on par with 16bit era audio. From the blips and bloops to the brilliant level of MIDI tracks. Normally I would say that music that is only one minute or so looping over and again while you play could be antagonistic on its own. With Riddled Corpses EX, I definitely think they found a way to strike a great balance. By having fantastic, catchy music and thrilling gameplay (more on that soon), you have a game with music that doesn’t grind. You’re so goshdarn distracted by the fun that you’re experiencing in this game that you just don’t realize how much the music is truly repeating. Kudos to the developers on this one.

With regards to the visuals…I mean, come on. Some companies really phone it in to get their games to look retro for nostalgia’s sake (make money off of nostalgia). The developers who worked on this game obviously took their time to hone what a true 16bit game would look like if it had been made with HD visuals in mind. And speaking of HD visuals, this game also runs at a juicy 60FPS, so be prepared for that. The levels run the gamut of cityscapes to laboratories to deserts and have great, fun layouts to each.

I have zero complaints here and I really tried to find things that could be considered at least constructive criticism. I looked at the text to see if it was unreadable as that can happen, and yeah, it’s clear as day. The icon clarity in terms of size is also sometimes an issue. They were always readable and never in the way. I guess the biggest note is just that at heavy points in the game you could have plenty of explosions and enemies on screen at one time. However, this is just the sign of a game that gives you challenge. It’s not something that I would tell them to remedy because then we’d lose all of the fun. They’d literally have to take enemies off-screen and tone down animations. Where’s the fun in that?

I was pretty surprised to find that this game had a story mode. Yeah, usually arcade-style games just seem to start with maybe a single screen with a couple of sentences. While this game is arcade-style in nature, it moreso reflects a home SNES game in terms of looks. First off, you select your character. You can see all of their stats upfront without needing to play them to see how they fare individually.

Those of you RPG players will already know the song and dance here. If they’re fast and agile, their hit points will be lower. If they’re slower, they’re considered “heavies” and they do more damage. When you’re playing as them you can see which one you like and maybe go and swap another one out. The first character is presumably for expert players as it doesn’t have a special ability to help you out in a pinch. But the rest of them do.

As you play, you collect gold found throughout the levels. The purpose of gold isn’t for anything in terms of the actual gameplay. You’ll find that it’s used to level up, unlock new characters, weapons, and abilities. This game doesn’t set out to reinvent the wheel in terms of using money to unlock extras. What it does it give you gold randomly and it’s up to you to get to the gold even during the heated gameplay.

With regards to the actual gameplay, you’ll use your thumbsticks to help you move and shoot. These are twin stick basics right here people. But you also have your face buttons to execute the extra abilities and such at a moment’s notice. Now, it isn’t just you who has the ability to move and launch projectiles. There are the titular “riddled corpses” as well. They’re riddled with bullet holes until you finally take their HP down to zero to kill them. You’ll also find that you can combo kills and keep a combo going as long as you can kill fast enough. Each level seems to have about the same zombies until you reach the more difficult stages.

Playing through as all of the characters and leveling up the characters all of the way will give you a lot of replayability on its own. It takes 9999 gold to get a new character (as well as leveling up who you already have) and other values of gold to get the aforementioned abilities. You’re going to maybe at best get enough gold in one playthrough to 1/6th of a new character purchased. So for every one character, you’ll need to play through about six times. That may sound daunting, but you really have a blast in this game. So it’s less like, “Now I need to play it another 5 times to get one character” and more like “Wow, I’ve already played through this like 19 times since I bought it, how many more things can I unlock?”

The thing I have yet to mention are the different modes. Yes, you have an entire arcade mode to play through and you can do that as much as you’d like. But there are also survival mode and the aforementioned story mode. This will keep you even busier and earning more and more gold. Look, you’re given a game that has unlimited replayability but they put the fire up underneath you to make you want to keep coming back again and again. This, by the way, includes a leaderboard system, so you’re never truly number one unless you get there and keep playing to stay number one!

I truly love playing high-quality twin stick shooters. I will say that it appears that having an XBOX One X doesn’t accentuate the game any more than playing it on a Vita. Feel free to crack into this game on any platform that you wish! That is unless you want a two-player mode, in which case, get the Switch, PS4, or XBOX One version of the game. If you just play single player and you’re a Vita owner, this game is the same on the Vita. I haven’t said this about any game in such a long time. But yeah, this game is a Hackinformer recommendation. I got so addicted to this game, that the other reviews I was supposed to be playing and writing got put on the back burner. And for only $10 you get yourself a great twin stick shooter with tons of levels, mass amounts of replayability, crazy bosses, and some really addictive music.
Now, if you have Riddle Corpses on the PC and you’re wondering if this EX version for consoles is worth buying. Click the picture below to see the list of all of the changes that were added over the original PC version. Only you can decide if the additions are worth you spending another $10. 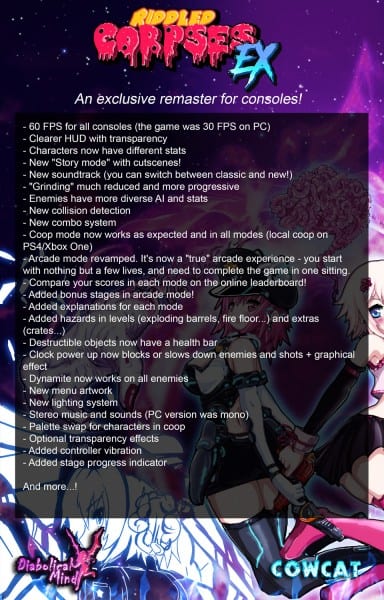