It’s been a while since we’ve reviewed anything from 8BCraft. In fact, so much time has passed since we reviewed the RaspiBoy, technology has gotten better (and more affordable). So let’s take a look at the standard model of RetroStone2 ($156, 8BCraft) as it’s bound to be heaps better than the Raspiboy! 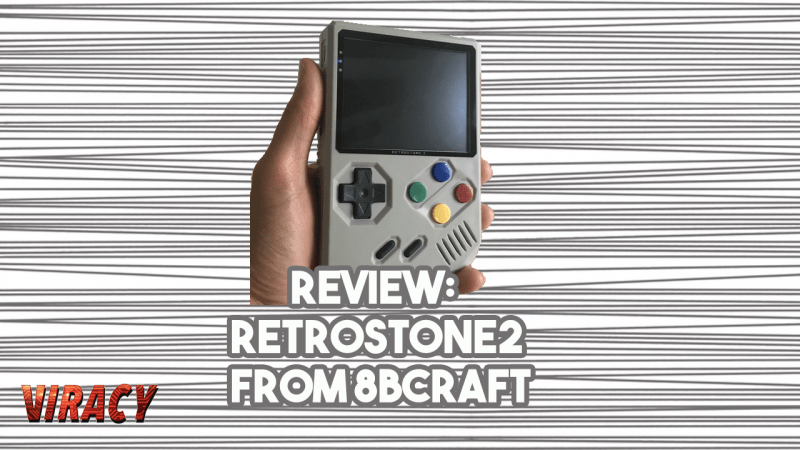 ‘RetroGaming is constantly gaining in popularity, especially with the developments of single boards computer (raspberry pi, orange pi…) that enabled us to make homemad retrogaming consoles. However those required lot of knowhow on electronics and DIY. You may have seen “Gameboyzero” projects on internet and understand how difficult assembling one can be! RetroStone 2 is here to bring you the best and most simple retrogaming experience.

You can use it to play to over 50 old video game systems :  Gameboy, Gameboy Color, Gameboy Advance, Super Nintendo, NES, Megadrive/Genesis, MasterSystem, gamegear, Atari, MaMe and so on. You can have a look here to all the supported systems. In more technical terms they are basically SBC (single board computers) with all the peripheral needed to make a handheld console (screen, speaker, battery…), making it perfect to run Emulation Station/Retropie.

So yes, all your childhood video games on one handheld console, that you can plug to your TV, and play multiplayer. Yes that’s a high five to my-10-years-old-self!’

‘This is designed to be compatible with Armbian distribution of Linux, as well as with Retrorangepi the Allwinner version of the famous Retropie emulation software.

I only reviewed the standard version of this handheld. There is a pro version of it for those of you who feel that this version is missing things. Click the purchase link down below, you’ll see what the Pro version has to offer. As for the overall thoughts of the standard RetroStone2, I think it’s an absolute winner. If your aim is to just have a casual product that can play every game on your shelf (in ROM form), this is it. I haven’t held such a refined piece of retro tech from a non-first party company ever. I know that there is emulation on PSP, PS Vita, and 3DS, but there’s just something special about this product. I mean it’s made exclusively for playing your retro games. The fact that 8BCraft keeps honing and refining their products means we can expect to see even more greatness come out from them in the future. If you can deal with the button layout, the microUSB port for charging, and the price point I’d say stop reading and just click the link below.

Click here to buy a RetroStone2. Feel free to customize it further, if your wallet allows!

Click here to read about flashing an operating system onto your newly acquired RetroStone2 (this must be done first).

Click here to read about flashing ROMs on to your newly acquired RetroStone2 (this comes after the OS).