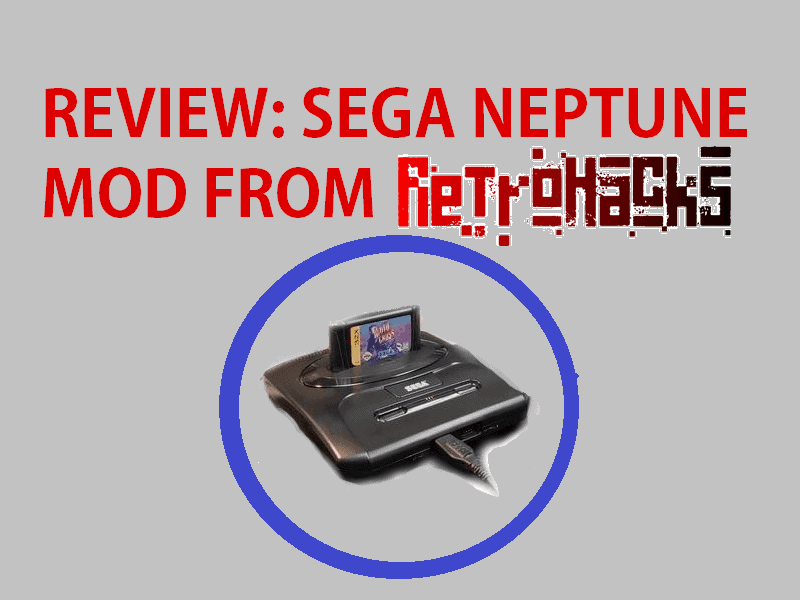 Today we’ve got a special and different review. This may even be the first of its kind reviewed or reported on for our site. We’re going to be discussing the mods available from Retrohacks.net while also reviewing a modification that he did for us. Among many of his services, he has one to turn your Sega Genesis model 2 and Sega 32X into one unit, the Sega Neptune. Don’t worry, we’ll only briefly get into the history of the actual Sega Neptune, but if you want the full story, read about it here. Now let’s get started!

‘Sega Neptune was a two-in-one Sega Mega Drive and Sega 32X console announced by Sega but never released to the public. Some sources claim the intended name for the console in North America was Genesis 32X System.’

Simple. I absolutely love the form factor of the model 2 Genesis. Having the 32X may be nostalgic for me, but it’s certainly not practical. You need an extra video cable to join the 32X to the Genesis. Then they both need their own power cord. What kind of awful non-sense is that? With this modification, I now have one video cable and one power cord. Furthermore, this means only one huge chunky power adapter in my wall instead of trying to do 2.
Convenient. Extremely convenient to have one slot for all games. I realize that the 32X attachment was originally a stop game to fight the good fight against other consoles with 32+ bit graphics. But having a single slot on my console (if it had worked that way, more on that in the cons section) means a much greater convenience.
Clean. Cleaner method for loading 32x games. And by that I mean it’s a space saver overall. For instance, you save so much vertical space on your shelf for all games by not having a 32X on top. You save a hell of a lot of space if you’re playing Sonic and Knuckles with a Sonic game on top by having this Neptune mod.
Magic. An unreleased product from Sega now exists! The day I found out about how the Neptune was almost the exact same form factor but played 32X games as well, I was like, “What?! I need one of those!”. But then I was saddened to find that they never saw the light of day. Now I have in my possession the intended form factor that has been modified to do the intended purpose.
Light. This little box weight a lot less than the original Genesis model 2 and 32x attachment. So not are you only saving shelf space, but you’re saving a ton of weight as well. Not that you have to pick it up very often, but lighter is always better for any electronic in my personal opinion.
Audio. I’m always iffy when it comes to modifications that I might have the person doing it cause booboos. It has always been a fear of mine because while they may improve one thing, they may accidentally hurt another. Well, I’m here to confirm that the audio in the games still sound great. No pops, buzzing, hissing, whizzing, whistling, crackling, or altogether silent. It’s so crazy that I can play and hear 32X games as intended without the physical 32X! I just can’t get over it.

Cost. Yes, I’m aware that it’s a lot of work, it’s tedious, and takes a steady hand lots of hours of meticulous labor. But that on top of shipping and supplying the main parts may be a deal-breaker for some. I’m also all too aware that other mods may even cost more than this from other mod sites. I’m just saying, that this isn’t a mod that people need. It’s just a mod that people might want. The site may stand to get more business for this specific mod if they brought the cost down. Because then it would be more of a scenario where people know they don’t need it, but for that price point, they can still do it if they want.
Tight. The form factor of the model 2 Genesis is great as I stated. However, it is not exactly designed for 32X games to go into the slot. Having said that, 32X games definitely can fit in the original slot with zero modification. However, it is a very snug fit for those 32x cartridges. You don’t have to struggle or anything, but you’ll feel like you might break something each and every time you do it. Is this the fault of retrohacks.net? No, not at all. But should you be aware of it because changing these carts time and again may kill the fun of playing with your new Neptune.
Sad.  Now to discuss the elephant in the room. We’ve already discussed the price point and now we have to discuss the main problem with the mod itself. And that is that you have to gut an entire Sega 32X unit. Of course, you’re still keeping your 32X compatibility by adding it into the system. I’m not talking about that, though. I’m talking about the fact that you’re taking a fully working 32X off the market. You’re erasing one whole unit from history and for me, that was kind of hard. It’s in the same vein of people gutting old sports cartridges on Genesis or SNES to use their parts to fix their other carts or make new homebrews using the parts. At some point, if we do that for long enough, there will be zero sports games left. And while nobody claims to be missing them now, they are indeed a part of human history and should be kept around. So you have to be more than okay sending off your model 2 Genesis and your 32X unit. Please don’t go out and buy another set of them to do the mod with. Let someone else have fun with 32X, you just use the ones you already own, man.
Static. My biggest bummer was the video quality. You’ll notice in the video above that it’s not just a straight, clean image. The modification has introduced some noise on the screen when playing 32x games. I tried both my Pound HD Link cables and my standard RCA cables. The RCA looks less obvious as it’s both a much lower quality output, but also the CRT doesn’t do it any favors. The HD Link cable is how I recorded the content for the video. And as you can see, my El Gato picks up all of the noise on the screen that I see when playing on my HDTV. It’s sad because to make this Neptune look the best, I have to play it on a CRT television. If all that you have for retro gaming is a CRT, then I suppose that that is fine. But it’s still noticeable to the naked eye. I really want to be able to play my retro consoles on an HDTV though.
Sega. I don’t know what the problem is, but I’m just going to come out and say it. Sega games won’t load at all. It seems to show the “Produce by or under license from Sega Enterprises LTD” screen, then it shows nothing. Or sometimes it shows that sentence, then it shows static. So clearly it detects the game, but after that, it cannot load whatever is on the cart. I know the picture above shows a Genesis cart running, as that’s what retrohacks.net sent me. However, I cannot get a single one to run. I cleaned all of them with my 1UP cards and Game Juice to clean the carts first. They all run flawlessly the first try on my 1st and 3rd model Genesis and my Super Retro Trio 3+, but not my Neptune.

To advertise this as a Neptune mod is a bit deceiving. I couldn’t get any of my original Sega games to load. Only 32x games would work. They were all cleaned games that I also tested in my 1st and 3rd gen Genesis and they all worked. Clearly he put a lot of time into this, but maybe it didn’t turn out the way he had hoped. I’m uncertain if maybe something came loose in the shipping process, but nevertheless, I now have to use my 1st or 3rd gen Genesis’ to play my Genesis games on. They’re probably honorable people who might be able to look into the cause and fix it for me. However, I still have to be transparent and let you all know the review in all truth.
So is it worth it then to have a dedicated 32x sega? No, not at that price point. And I don’t just mean the mod and shipping costs. I also mean at the cost of also having a 32x to gut. That on top of also having to supply a whole Genesis. And for situations like my Neptune, the cost of having a separate Genesis to play your Genesis games on. And on top of that, there is static on the screen? I’m sorry, I can’t recommend this specific mod. Of course, he has tons of other mods that aren’t so out there. I just wanted something to make my gaming shelves look cleaner (no 32x) and that’s why I requested this. Maybe try his other, more standard services in the link below. His whole twitter page also shows that he does tons of professional mods, so don’t lose faith in him! Just maybe choose something other than the Neptune.

Interested in getting a mod done from Retrohacks? Head here!