EON Gaming had been teasing a new product for their site and everyone in the retro video game scene was teeming with excitement. It wasn’t long until EON announced that their newest product was the Super 64 for the Nintendo 64. Fast forward to today and we have finally gotten our hands on it for a review! I do have gameplay captured for this review, but I focus less on the video quality and more on the practicality of EON’s offering. There are already dozens and dozens of comparison videos out there, and most don’t talk about the elephant(s) in the room. Having said that, let’s dig in! 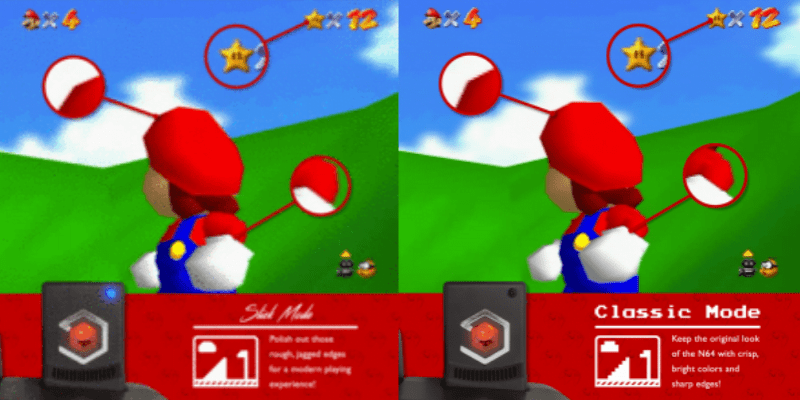 Everything I’m about to say doesn’t really pertain to the review at hand. It’s more so just a thought I had whilst doing the review. So by all means, feel free to skip this part and read my final thoughts below. Still with me? Good. I genuinely think that this product might have been something originally developed for the Gamecube. This product seems to be something that probably was being developed way back before the first GCHD (maybe as a solution for both DOL-001 and DOL 101)  and maybe they just felt that it wasn’t good enough. Maybe they set it aside and went back to the drawing board, or maybe they happened upon some tech that was more promising and set this aside. Then when thinking of a new product, they realized that what they had from before was more than appropriate for the N64 as it’s output was always junky unless you had the elusive S-Video cables.

But now we’re at the point in the story when you realize that maybe, just maybe this product would also work in a Gamecube or a SNES/Super Famicom if the body shape was right. I did test it in the Gamecube and it does indeed fit. And yes, if you disassemble it or shave the sides around the plug, it could indeed fit into a SNES. I would obviously have loved them just modifying the shape ever so slightly so that it could be a 3 in 1 solution (SNES, N64, and Gamecube DOL-101). To answer the full question, this does work in a Gamecube.

This may just be something that they already had in the shop and refined it into a sellable product. I want to believe that they came up with this idea fresh and used the knowledge they had obtained from working on the Gamecube and applied it to the 64. But the lack of extraneous features for this device scares me more than the price does. I’m of the belief that we’re just seeing the first generation just the same way we did with the GCHD. The people with disposable income who have a deep love of retro will buy plenty of these and then in a year or so, we’ll see EON release another version with the features that this should’ve had. It’s a great product, but if the cost scares you, maybe wait to find it on sale. I’m fearful/hopeful we’re going to get one later that fits more consoles, has audio out, and more color options at the very least.