So Senran Kagura is a series I have caught glimpses of before and I would be lying if I said that I wasn’t a little curious as to what they were like. With the launch of Senran Kagura Burst Re:newal on the PS4, I was given the opportunity for an introduction to the series through basically a remake of the first game in the series with some improvements and innovations. I had no idea what to expect from this game, but after playing it for a few days here is my take on it. 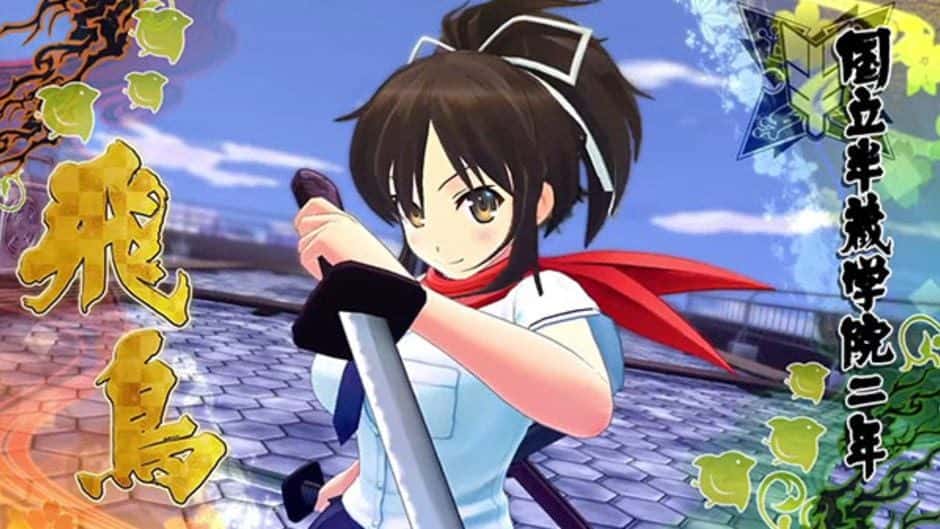 As a quick disclaimer this game is wall to wall fan service. Everyone who has ever dipped a toe in this series knows its main feature is making some rather well-endowed women do awesome stuff while looking amazing. If you just investigate the game even a little bit you can immediately notice the overt sexualization of the characters that the series is known for. If that sort of thing offends you or makes you uncomfortable you might want to look for a different game. However, if that sort of thing does not bother you or you are a hardcore fan of the series, then continue from here. 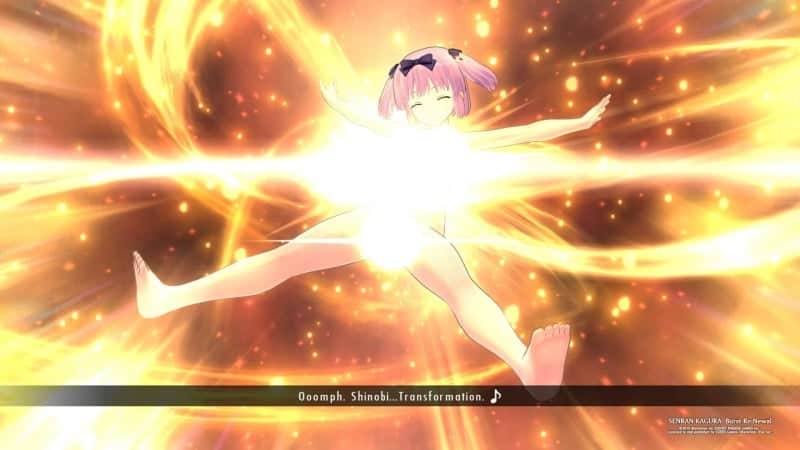 So immediately I will say the visual style of the game is amazing. The game is now in HD after being remade for PS4 and PC. The Beat Em Up style action is fluid and accessible, which allows players who may not be great to pull off some sweet moves with just a little learning. The music is enjoyable at times, though I find the menu track annoying. I will say in my opinion Burst Re:Newal is a decent game that I found somewhat enjoyable and that would call a guilty pleasure, though obviously not game of the year. I will explain what I mean by that later but first let me talk about changes for the series’ veterans. 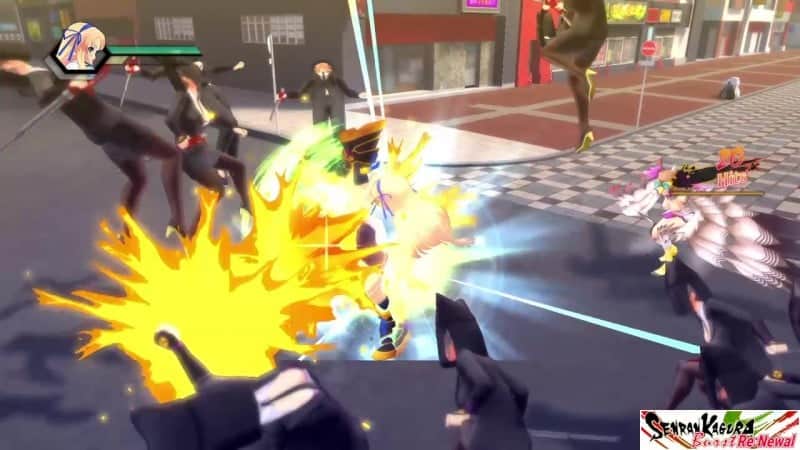 As I said before the game has updated graphics, but it also has another visual change for this remake. Burst Re:Newal is a completely 3D game while the original on Nintendo 3DS was a side scrolling Beat em Up instead. A new mechanic was added called the burst gauge which, once full, massively increases damage until the bar empties which causes a devasting multi hit attack that will finish most small enemies and do major damage to bosses. Finally, there was a bit of controversy thanks to Sony on this game. Sony demanded that Intimacy mode be removed from the game if it was going to release on PS4 which is what I am playing on. If you don’t know what Intimacy mode is, it basically is a mode that allows you get a little more “hands on” with the girls which is all I am going to say. Some fans were mad about this for many reasons but I myself was fine without it and if you must have it, the mode is still included on the Steam version. Now with the biggest changes out of the way I can move on to the story. 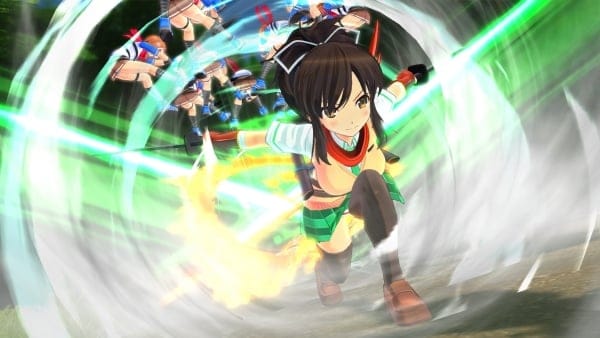 The story is not bad at all, as I have seen much worse.  To me the story is just kind of boring and it is not the game’s strong suit. The story sections kind of take the form of a visual novel with fighting interspersed throughout and is split into two paths that tell different sides of the same story. Each path has five chapters with roughly twelve parts or so.

The basic gist of the story is that there are two factions of Shinobi split into good and evil, who work in the shadows making things happen in the world through different means. The good are government funded and focus on protecting the world from threats and injustice, and the evil function more like mercenaries taking jobs from corporations and public figures for any reason they see fit. Both sides have their warriors train at secret programs while in school and that is where our cast comes in. Five girls from Hanzo National Academy (on the good side) and five from Hebijo Clandestine Girls Academy (on the evil side) meet each other and find themselves fighting over a secret technique scroll and each branch of the story explores their motivations and personalities as you progress. 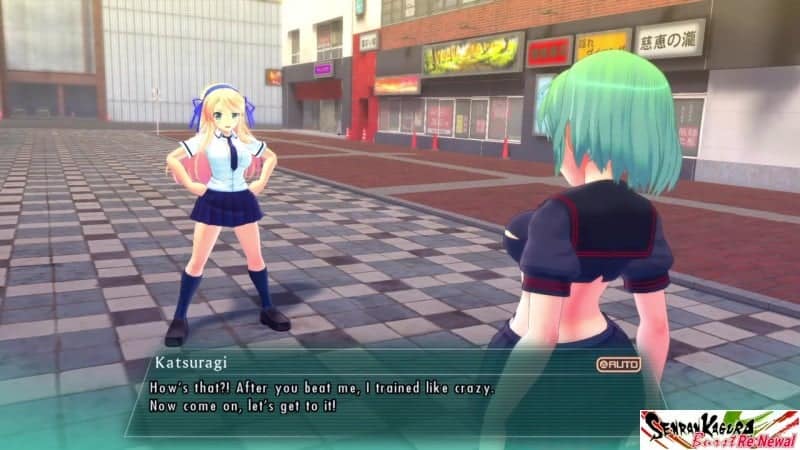 The problem is while it sounds like a decent premise it comes off as bland at times and the visual novel style doesn’t match with the fighting sections in terms of pacing. One minute you are hyped up from intense button mashing battles, the next everything slows to a crawl with a lot of reading on-screen text while voice actors speak in Japanese, which you cannot change.

However, the developers are self-aware enough to realize that the story does not have to be perfect and that some fans are not there for story. Players can go into the settings menu and set the game to automatically skip all story sections and jump from fight to fight. While the story is not the best, the actual gameplay is pretty great. 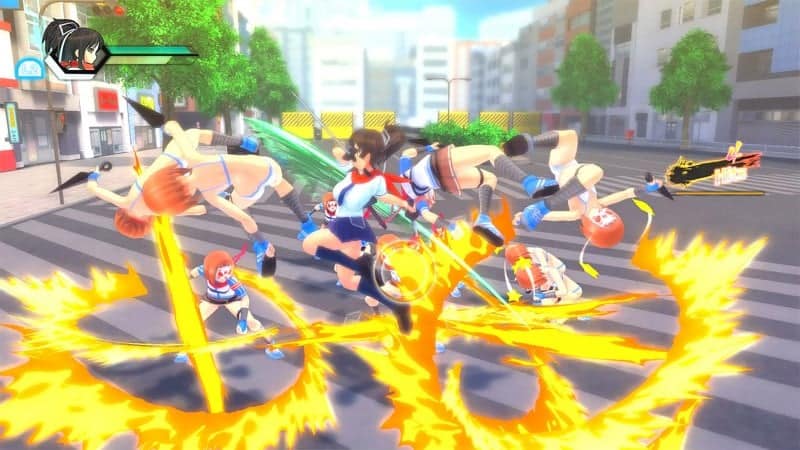 The mechanics of Burst Re: Newal revolve around playing as different female Shinobi and pummeling your way through large hordes of other small-time shinobi women until you reach the boss whom you square off with in an epic one-on-one ninja fight. These battles are flashy and well-polished, revolving on doing insane but simple combos that can reach hundreds of hits without much effort. 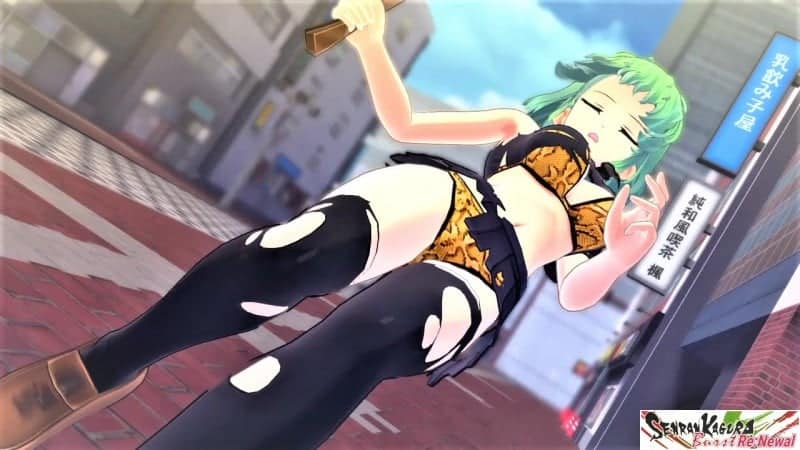 There is a lot of fan service in the combat. Doing or receiving damage in combat can cause characters clothes to be shredded or to come off entirely. Also, characters can transform into a more powerful form which involves a small cutscene of risqué poses, flashes of light which cause characters to strip, followed by a close-up of their new outfit materializing out of thin air. These scenes are censored but people who came to the game for fan service will be pleased. 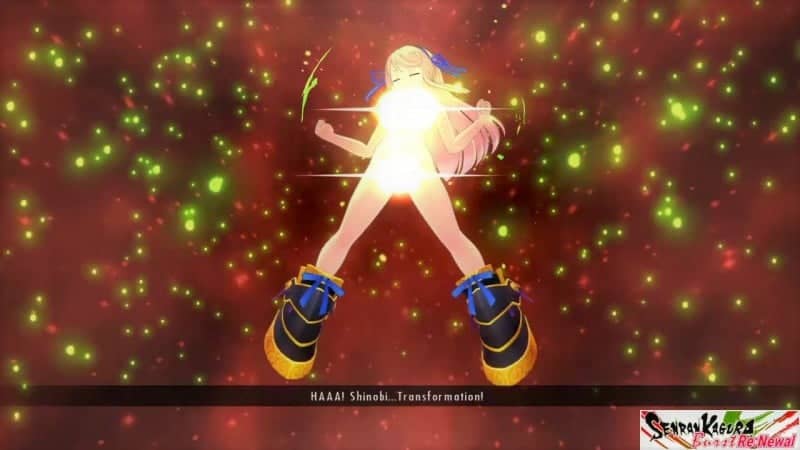 At the end of each level depending on your performance you will be awarded currency to unlock things like outfits, music, etc. There is also a large selection of outfits you can buy as dlc, if that is why you are playing the game but there are plenty of things to unlock in the base game as is. 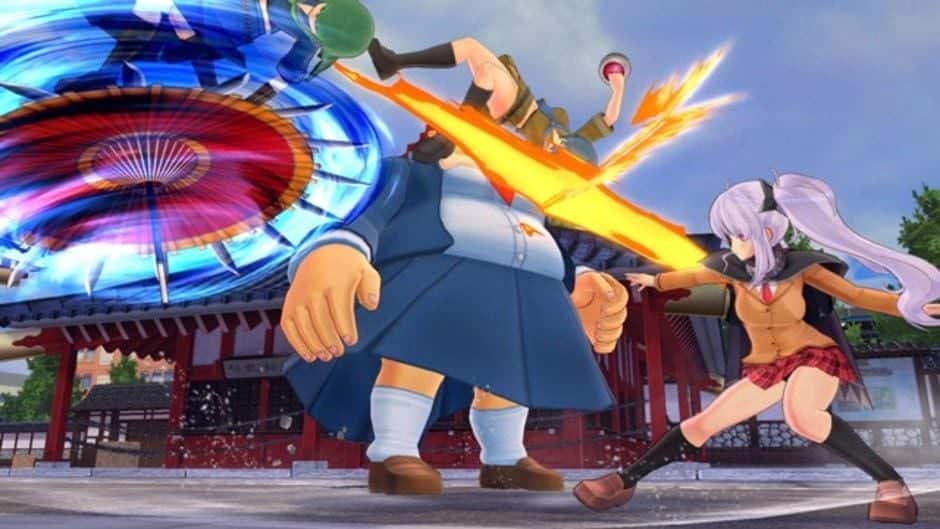 The only problem I have with the combat is that at least on the PS4 version the lock on feature will automatically lock and unlock from targets without your input and there appears to be no way to fix it. I still feel that the combat is fun enough to make up for the lackluster story and makes this a game I will guiltily play and enjoy.

All things considered I don’t think Burst Re:Newal is a bad game. It has a very enjoyable and kinetic combat system and a beautiful appearance. It knows who its fan base is, and it gives them plenty of sexy outfits and visuals for players to enjoy. Though the PS4 version did get censored you can get it uncensored on steam. The story is a bit lackluster or even boring but again you can just skip it and jump from fight to fight. I would say that it is an overall average game both not bad but not amazing either. At forty dollars I would say it is a little steep if you are looking for an award-winning game but let’s face it you know why you would buy this game, I know why you would buy this game if you know what you are buying go right ahead you will enjoy it. If you have never played anything in the series, though a little expensive, it might be your next guilty pleasure game to play when your significant other or family is not around.

If you are interested you can find Senran Kagura Burst Re:Newal on Steam or Playstation.