Review: Haunted Halloween 86 for XBOX One

Here we are, Halloween 2018 has almost arrived and we haven’t covered even one horror game? No zombies, ghosts, ghouls, goblins, vampires, or creepy crawlies?! Well, that ends right now! Follow me as we peer into Haunted Halloween 86 ($9.99, Retrotainment Games) for the XBOX One.

“A legit, 8-bit, NES experience programmed in 6502 Assembly language, Haunted: Halloween ‟86 (The Curse of Possum Hollow) is the mind-melting sequel to Haunted: Halloween ‟85. It features the heroic battles of Donny and Tami as they fight to save their home town of Possum Hollow from Haunted Harry and his heinous henchmen on Halloween night in 1986. This side-scrolling, platforming, beat-em-up adventure takes players throughout Possum Hollow as Harry and his haunts start to wreak havoc… again! But this time Donny has his tag team partner Tami to help kick the living crap out of the mindless wastoids that are trashing the town. The advanced combat system, awesomely detailed graphics, unique characters, and insane parallaxing make this game stand out, even amongst the storied library of the NES catalog.”

“- Unlockable and upgradable power moves that can be comboed for maximum ass kicking.
– Characters with weight to them combined with fluid mechanics and physics makes for some high-flying, beat-em-up action.
– Tag Team Technology allows the player to swap between the two characters on the fly.
– Unique art style, environments and characters all in true 8-bit fashion.”

It’s always harder for me to really get a sense of if an 8-bit soundtrack is good or not. I’m not saying that they all sound the same by any means, of course. What I’m driving at is that since they’re all synthetic sounds, and not natural instrument tunes, I can’t really place them in the “good” category in the first place. But that certainly doesn’t mean that they’re bad either. I just think that a lot of them sound the same, given the nature of how the music is made.

None of this is Retrotainment Games’ fault, it’s just a personal preference of mine. I know there are tons of you who love chiptunes music, so maybe someone here can chime in and tell me what they thought of the music. All in all, I would have to say that it definitely sounds like the music is nice and eerie. So at the very least, they’ve accomplished a mood for me to kick zombie butt too.  Perfect chiptune music to hear on Halloween, if  you’re in the market for that sort of thing. 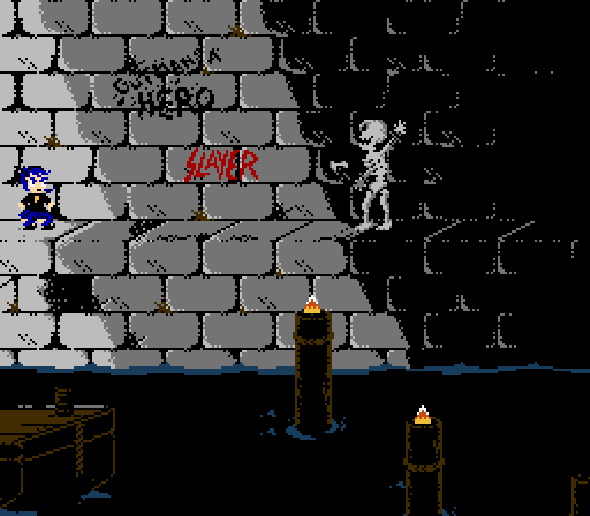 We all already know the kind of graphics that we can get out of a Nintendo Entertainment System. The look overall adheres to what Nintendo themselves set for the rules of programming games for the NES. There are some fun nods to the way things look though. The main characters themselves remind me of a mix between Kid Nikki and Renegade.

They do so much more though with the NES than anyone that I’m aware of have ever done. They have lots of dark scenery in the background that is chock full of small details. This is the overall mood of the game. Just a fun romp through a dark, dank zombie-ridden world. And in fact, the zombies themselves are different colors and such. This not only adds to the style and vibe of the game, but also serves an in game purpose of knowing which zombies are easier and which are harder to kill.

The only reason I’m mentioning the NES aspects of this game is because this game was indeed made for the NES. The game, as I said, was made from the ground up. It wasn’t until recently that Retrotainment ported the game to the XBOX One. So what you get is a game that is for the NES and ported to the XBOX One and so you get the exact same experience in terms of visuals. Albeit, they look great as they’re clear as day on a system like the XBOX One. That means you have less potential noise on the screen or cartridge issues. 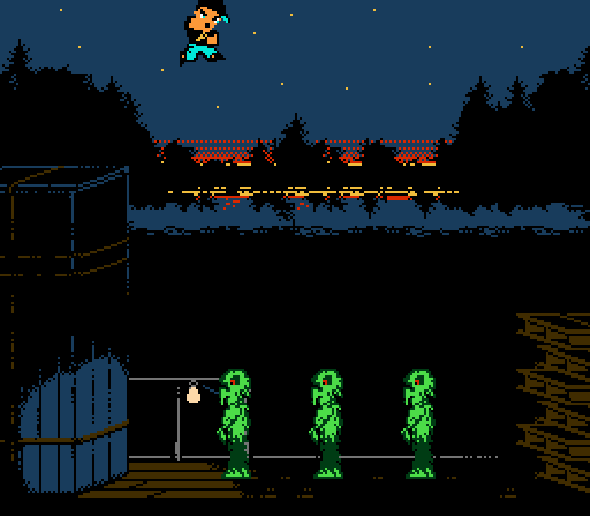 The easiest way to explain what Haunted Halloween is is just to call it an action platformer. We’ve all played action platforming games in our time, so the movements should come rather natural. In the game, you’ll not only jump and attack the baddies, but you earn extra moves as you go through it. I’ve never personally played Haunted Halloween 85, so I won’t be able to compare the two. I can only assume that they’ve improved on aspects of the previous game. Unfortunately, I couldn’t speculate if it was more of the same or not.

What I did notice is that there are bits of the game where the aforementioned dark levels can be a pain. Sometimes you’ll have to be jumping from block to box and you can’t really quite see. It’s just sort of a blind jump. Maybe that is intentionally made this way to add a sense of fear and bravery to the title. I’m really not entirely certain here. But it’s not going to be too terribly difficult, just take the jump and generally, you should make it. Sometimes you won’t, and if there are zombies there, then you’ll just have to deal!

The game is split up into levels, as most NES games are. Each level in the game has a different vibe and each level marks the checkpoint. There are also passwords if you think that you’re about to be taken back to the very beginning of a chapter. I recommend both collecting lives and jotting down the passwords. Hey, it’s not cheating if it’s in the game! I only mention doing both because if you’re in a really hard level towards the end and you don’t realize how many lives you’re losing, you’re going to kick yourself if you get tossed all of the way back multiple levels.

All in all, I loved that I got to play a new NES game. The game may not be perfect, you may find different things that you don’t like, or you may think the game is perfect. No matter the reason you may choose to play Haunted Halloween 86, it’s just great to have a new NES game t0 play. And better yet, if you’re someone who doesn’t have an NES, or keeps it in box, you can play your XBOX One or PC and get down on some zombie killing action! 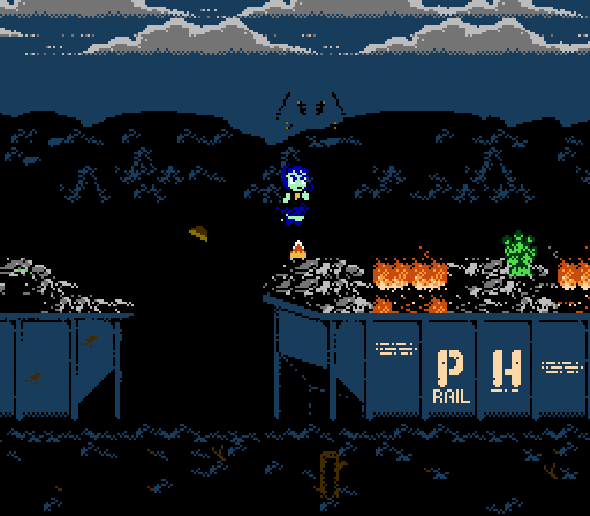 The game has multiple ways of playing it, all of which could extend the life of the game for you. At $10, you should feel satisfied playing it once through. But you can and will find satisfaction playing this game more than once. And not only that, different difficulties offer you a different experience.

So, if you start with easy mode, you get access to more from the very start of the game. You will be able to use the characters’ double jump, forward, and downward dashes the whole game. This may help some of you who are not used to action platforming games. After you beat the game through in easy mode, you can move up to normal mode to extend your game longevity. You’ll have a mode that enables the double jump, forward, and downward dashes throughout the game. This means you have to be better at playing the game without the extended moveset for a while. So git gud.

You’ll also find that you can tag in the secondary character. I don’t know if she is actually any different or better, but she feels like she’s quicker. So if you’re looking for more of a challenge, you can choose to not tag her into the game. Tagging her in with her own life bar basically means you can play for twice as long, which is great if you’re just trying to beat the game. But if you’re really wanting that challenge, just don’t press the Select button.

Lastly, another way to really stretch out the game and get your money’s worth is hidden items. There are items that are hidden about through the entirety of the game. Last of all, if you’re someone who is an achievement junkie, this game features 10 achievements to complete. Overall, I’d say that for the $10 you’re spending, you’re getting just the right level of replay-ability from a 8-bit game! 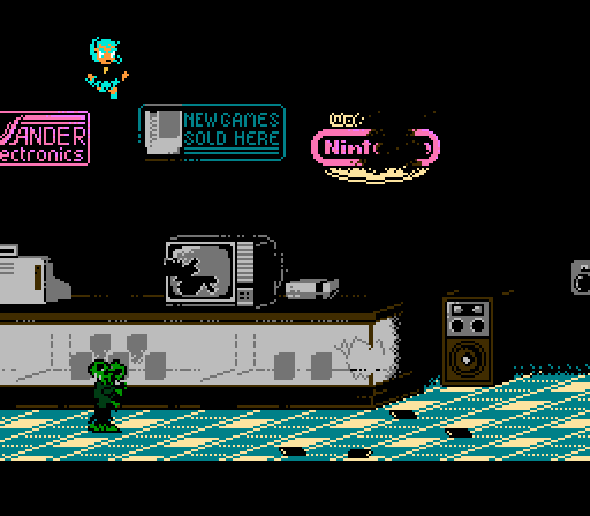 Want to buy Haunted Halloween 86 for XBOX One, click here.