Every single person that I know that is a gamer loves brawlers. They also love fighting and action games. Today’s review we focus on a title that has plenty of all three. That game is Brawlout ($19.99, Angry Mob Games). You may think that this game is just trying to copy Smash Brothers and some of you may think it’s trying to copy PlayStation All-Stars Battle Royale. This game may feature elements of both of those games, yes. But it has some of its own charm, wit, and gameplay mechanics that I want to talk about with you. 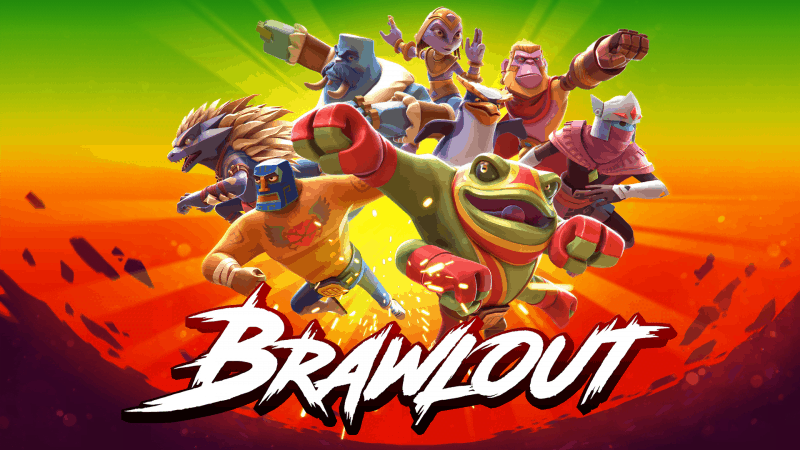 Brawlout packs a punch with couch and online play modes that feature quick matches over slow-paced, defensive battles. Brawlout goes all-out with lightning-fast aerobatics famously found in classic platform fighters. With wavedashing, a free-form combat system, and a chargeable ‘Rage Meter’ at the player’s disposal, each battle will be a combo-bonanza!’ 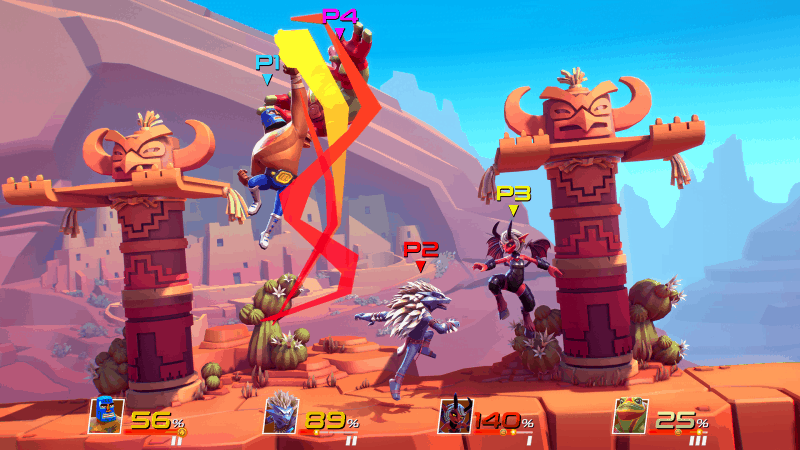 The overall theme music plays all throughout the menu screens. I couldn’t quite put my finger on what the song sounds like. But it was like a modern-day guitar cover of your favorite pumped-up action Sega game’s music.
Each of the game’s stages has their own individual songs. While I can’t logically go over each of the 13 songs, I can give my overall thoughts on them. The songs are nice and lengthy to start with. You’ll barely notice a loop in standard length gameplay as matches in games like this are generally fast. The songs also match their stages very well. My favorite song is from the stage in the game that is also used for tutorials. The songs really never really disappoint and seem to stick in your brain especially if you play the game heavily.
The sound effects in the menus are nice and subdued. You don’t have whacky or overly loud sounds in the menus. With regards to the fighting, the audio balance is spot on. The punching and effects don’t overtake the thrilling musical scores. 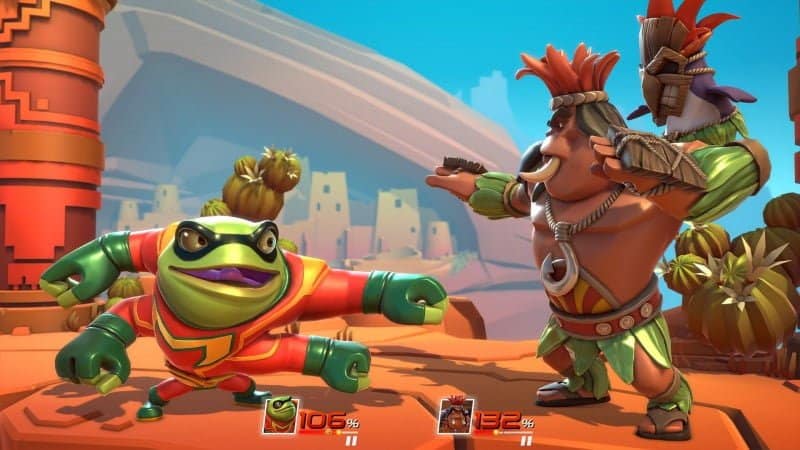 This game isn’t over the top beautiful. We aren’t talking about a God of War or anything like that. This game is light and doesn’t take itself too seriously. It needs to be a family friendly art style while still looking badass. I think that they’ve found the good middle ground there.
I love that they made some of the guest characters fit their aesthetic of the game too. Characters like Juan from Guacamelee fight in with the game and he looks like he just belonged from the beginning. Yooka Laylee is another interesting add in. They fit with the fighting of the game, but instead of making them look different, they kept the original 3D models. My guess is because Yooka Laylee already was a 3D game this worked out. But Guacamelee and Hyper Light Drifter are 2D games so they had to be fleshed out.
The level design is alright overall. They’re not doing what Nintendo and Sony do which is recreate iconic areas. They didn’t have to since they have a lot of original characters. What they did have to do was make certain that the layout of the different stages had some differences so that people wouldn’t be playing the same stage with just a different look. I feel that they handled that much. 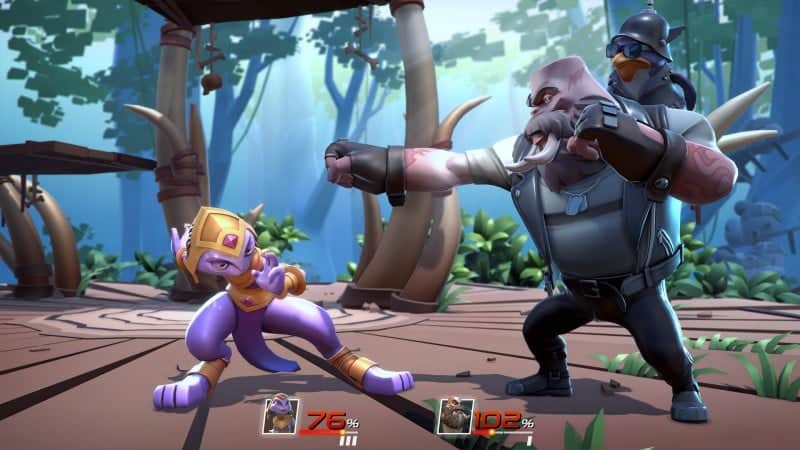 You have a profile as well that keeps track of all of the things that you have done. My profile the very first time I started the game looks like I had played before. And maybe all profiles start out with a little bit unlocked. It showed 9 of 24 characters already available. It also showed I had 51/97 skins, all 13/13 stages, 0/38 taunts, and 3/42 effects.
There is a tutorial mode with basic and advanced parts. Even if you think you have a grasp of the way the game will be played, the tutorial is still worth playing. That’s just mainly because it takes all of five to ten minutes and you get a couple of achievements from it. If you’re really not grasping the game, then this should be where you head first and foremost. It’s under the single player section of the game.
In terms of the arenas that you’ll be playing in, there are thirteen of them in total. The differences in the stages are varied enough that each stage feels like their own experience. Is every stage great? No, not really. Are most of them fun? You betcha. They can be really pretty if you’re on an XBOX One X or a PS4 Pro. Not necessarily because this game is enhanced, just because those systems do a small amount of upscaling when possible.
As far as the fighting goes, I have to start by saying that I suck at a lot of 2D fighting games. This one is clearly no exception, but I had a blast with it. For people like me, it featured the tutorial, an arcade mode that slowly gets more difficult the more you play, and the ability to go back and practice if ever the need arises.
They don’t have the D-Pad in the game like SSB does by default. So you’ll have to change that in the settings. But it is great that you have that as an option. In fact, you can change all of the buttons to whatever you. If it asks you which button do you want to be up, you can choose Start if you’d like. This is great for one-handed gamers or maybe some other type of handicap.
The game to me feels like it’s fun to play. But when reading online other people proclaim that it’s not perfectly balanced yet. I couldn’t really figure out how to tell if that was true with my lower skill level. I felt like I won and lost and even amount. If you’re really great at these games, you may dislike it.
The people that think it feels unbalanced give it a general 3/5 stars. Others who are like me have given it 4/5 stars. I would have to agree. If you just want a fun, fair romp with your buddies, this game scratches that itch entirely. 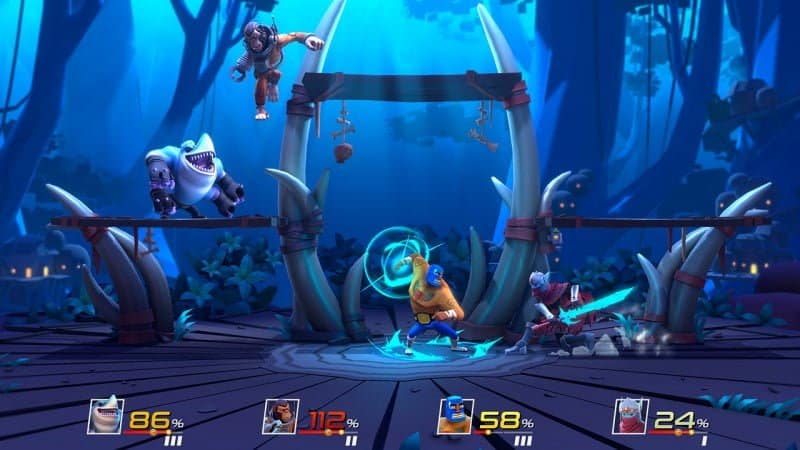 Daily rewards help encourage the player to return to get them continually playing. The more consecutive days logged in a row, the better the reward. I didn’t play the game outside of 2 weeks, so I’m not certain if it’s forever or just the first month of play. I’m also guessing that it restarts if you miss a day. But either way, it’s nice to be rewarded for something you were going to do anyway.
Obviously, this game has unlimited replay value in that you can always play against CPU (arcade, practice, and quick match), couch VS (Free for All and Teams), online VS (1v1, ranked, and private lobby), as well as tournaments every Saturday. And if that wasn’t enough, the standard version of the game (which is what I reviewed) features party modes that introduce new conditions like Golden Belt, Sudden Death, Secret Move, and Plague.
But Brawlout also features more reasons to come back. Besides the built-in achievements, there are also objectives. These are 4 challenges that present themselves to you daily and net you more in-game money and other prizes too depending on which challenges you tackle.
The game also features lots of unlocking that needs to be done as I mentioned earlier. On top of that, you’ll also find a list of “titles” to unlock. This is reminiscent of PlayStation AllStars Battle Royale. This means you have a lot more to unlock then just the stuff listed on your profile’s overview. The same goes for Mastery levels for each character in the game. You get plenty of unlocks when you master characters. If you get four characters to level three, you unlock Competitive Ranked matches for instance. If you get a character to the highest level, 15, you unlock a mastery skin for them. It shows everyone online that you’re about to knock their teeth in!
If you aren’t looking to play the game, there is a spectator mode called Brawlout TV. You can even just pop on to redeem your daily reward and/or go shopping in the store to purchase unlocks with in-game money. This game is chock full of reasons to come back time and again. 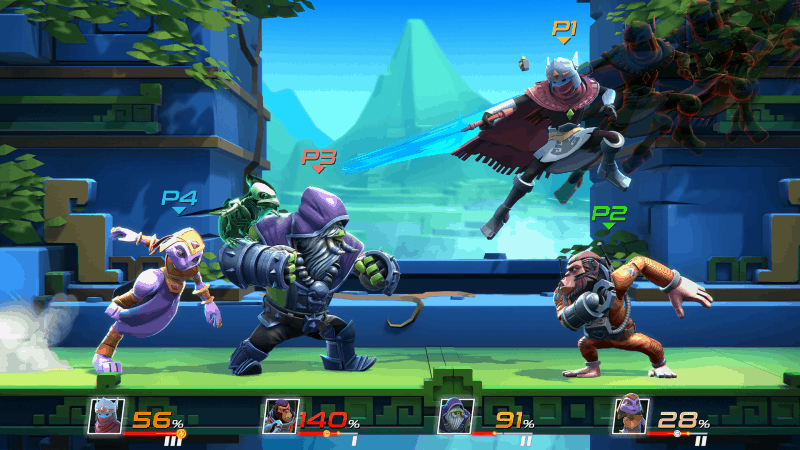