War takes its toll on everyone involved. For whatever reason, that war may arise, one thing for sure is that it will involve a strategy to win. In Valkyria Chronicles 4, you take the shoes of the individuals in Squad E as you live their story during their involvement in a joint operation to tip the war in their side’s favor. Will Squad E implement a strategy to win, or will it all be for nothing? Find out in Valkyria Chronicles 4. 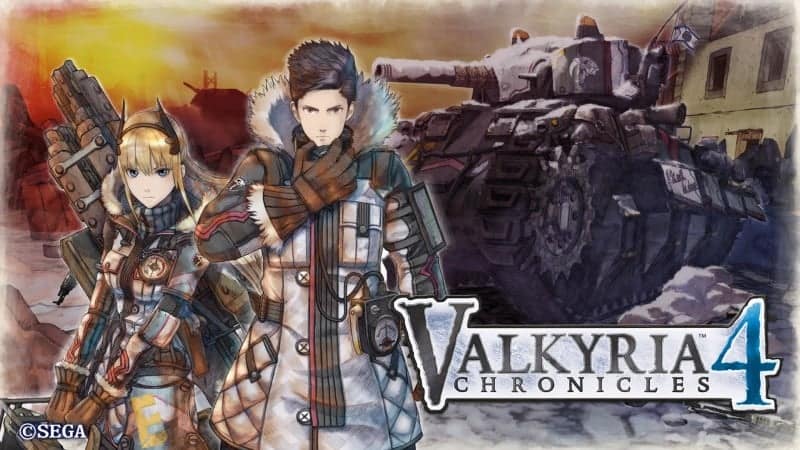 *Thank you to Sega/Atlus PR for providing the Playstation 4 Review Key.* 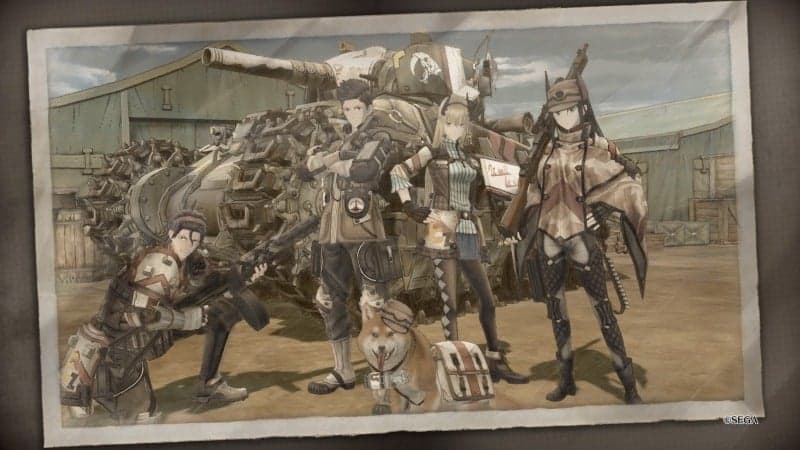 In the year 1935 EC, the continent of Europa is split between the Federation and the Empire. As the Imperial army dominates the Eastern Theater, the Federate forces launch Operation Northern Cross, a last-ditch effort to tip the scales. The commander of Squad E will test his will against the bonds of his allies, the weight of their trust, and the sacrifices they all must make. This is a tale of a bittersweet adolescence: the failures and triumphs of young hearts struggling to find themselves amidst the chaos of the battlefield.

The game begins you in the shoes of Claude Wallace, who is the leader of Squad E, as they are doing a routine operation. This operation serves as a tutorial. Following the completion of the mission, the squad receives some alarming news and proceeds forward to take it head-on. They learn that this is not the best approach and learn of their main objection. They are to have a joint operation with other squads to take it to the Imperial Army in Operation Northern Cross. During this journey, Claude and his squad will meet new faces (some allies, some enemies), will face trials and tribulations, and ultimately have a hand as to how the war will develop. 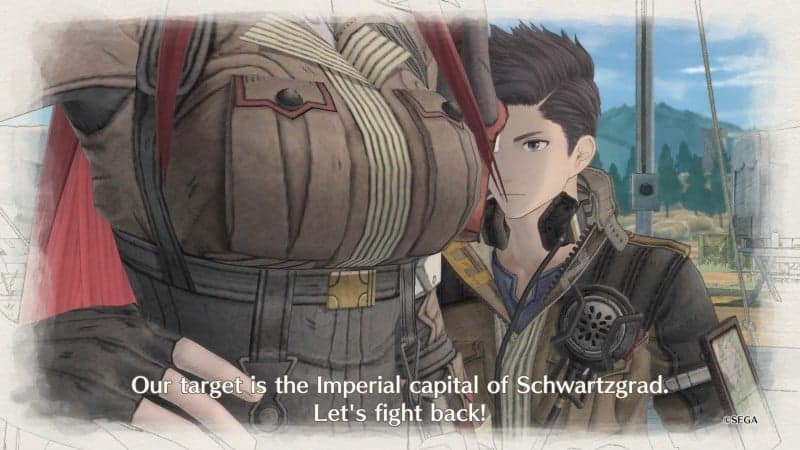 The delivery of the story is excellent. It will always keep the player on their toes to find out what happens next in the game. I found myself about to take a break from the gameplay but wasn’t able to due to how the story plays out following a mission. I was always curious to see what was next, as I did this multiple times. Very few games this past year had that element in my opinion. This goes the same for the presentation of the story.

In short, the story is well written in Valkyria Chronicles 4 and will keep any type of player engaged from start to end. It refreshes the story of the franchise and adds much more to it. 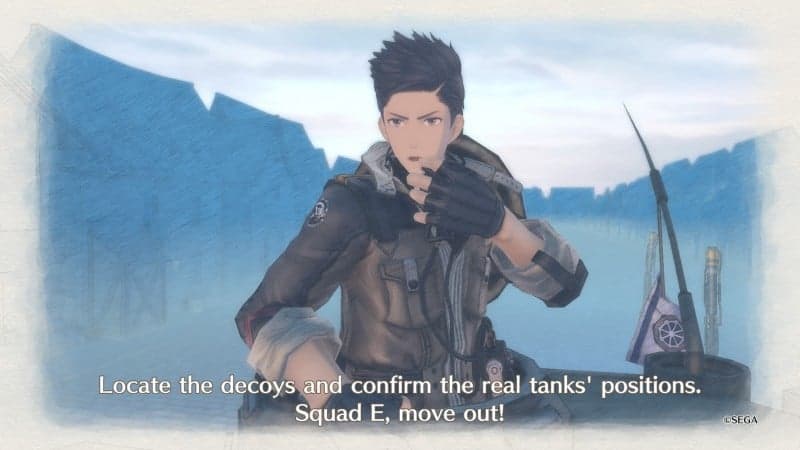 I am not one for strategy/tactical games, however, Valkyria Chronicles 4 manages to be a fantastic game in terms of the gameplay. The game starts with the prologue chapter, which is a tutorial chapter. The tutorial continues into the next couple of chapters. Following that, you are on your own to plan your own approach and strategy for the gameplay. 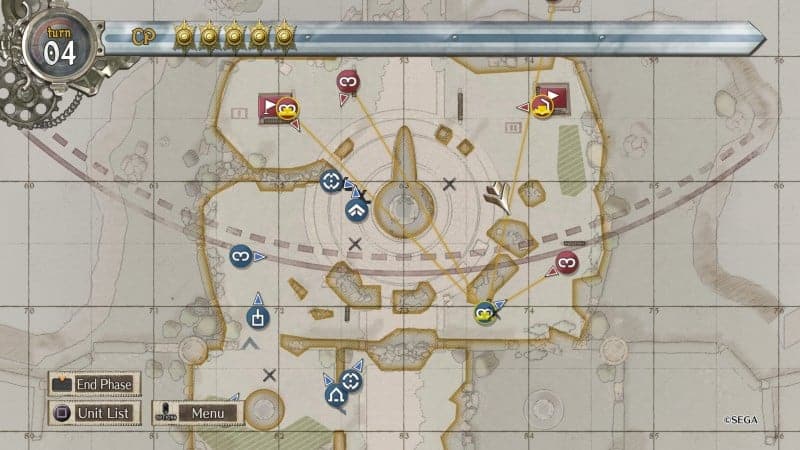 The player is basically dropped into a level, given objectives, and for the better part of the game left on their own to figure out the best approach to meet that objective.  There are the different class of soldiers and each one has their own skills that can be used. For example, you have the sniper class, which soldiers can only utilize snipers in each level. The scouts can only utilize rifles, and so forth for each class. 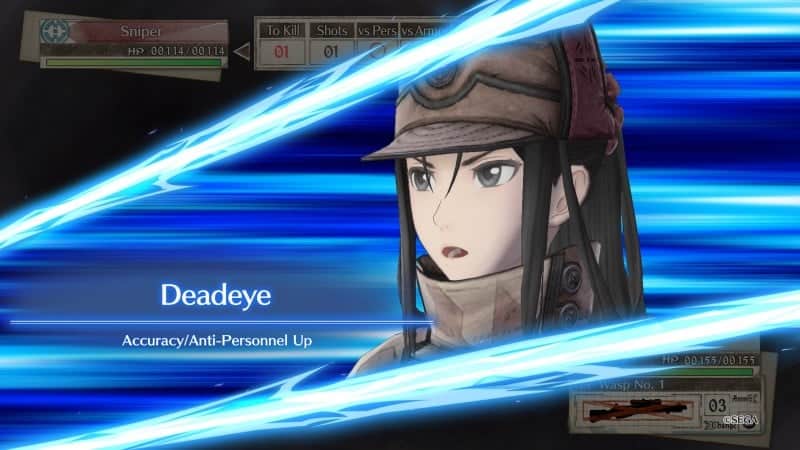 There are some levels that have set start points, but they revolve around what is going on in the story. After everything is taught to the player, those skills are put on the test. It is a very solid approach as this is the mark of the franchise as a whole. The main formula has never changed, but constantly sharpened and tweaked to improve each game. 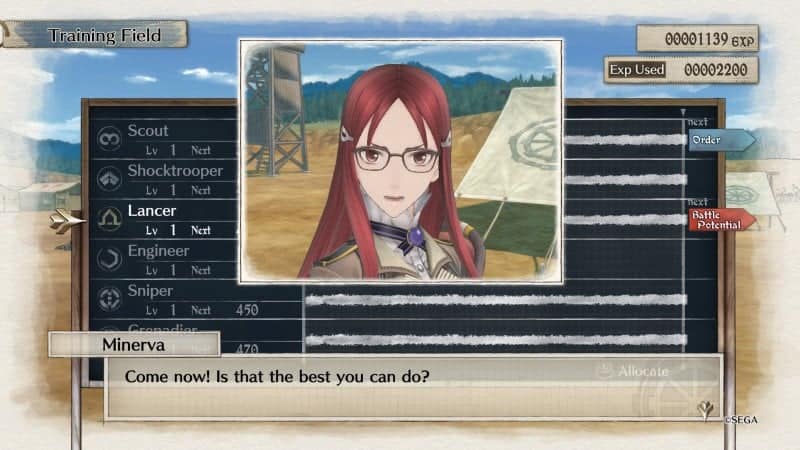 There is more to the game than the main story battles in Valkyria Chronicles 4. You have to micromanage your troops, which includes leveling them up (which is gained from completing battles), giving them the proper equipment, learning new orders, and a few more things you can discover between story missions. Besides that, you have skirmish matches to partake in, as well as individual character stories. In those individual character stories, you learn more about the personal side of Squad E, as well as the motives of some of these characters in Valkyria Chronicles 4. 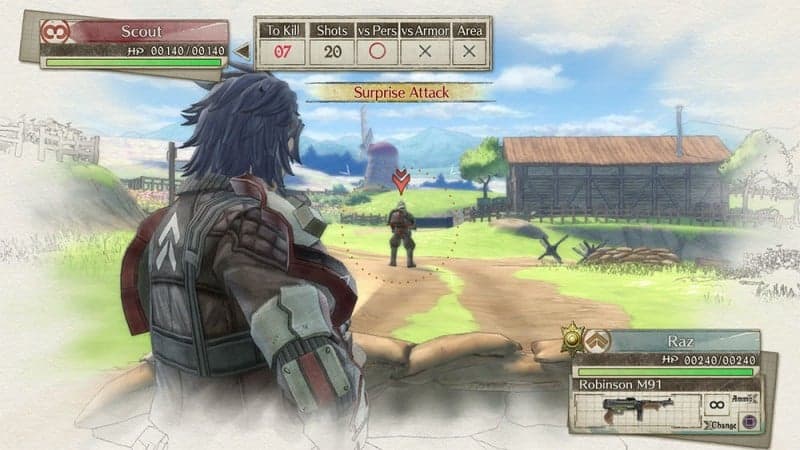 With a good amount of gameplay, Valkyria Chronicles 4 offers a well done tactical gameplay approach in the life of Squad E. One thing I did dislike about this though is the RNG odds you get as you play. See the screenshot above. Each character is given their take on how to kill an enemy/destroy a tank/etc. It tells the player how many shots it takes to take down the enemy. However, RNG does play a factor in this despite any equipment equipped. It could take 7 shots to kill the enemy, however, you can technically miss all of the shots or get 6 shots. 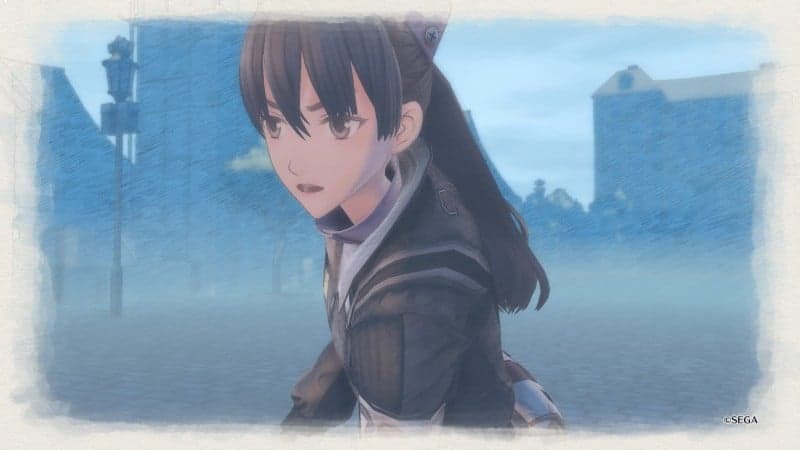 The RNG, of course, happens with the opponents as well. They have the same odds. They can down you in X amount of shots or miss entirely. This calls for another consideration in terms of strategy to be used as you can be downed. That downed member of Squad E can face death if not recovered. If you are unable to in 3 turns, that squad member is permanently dead. Be careful of that, or you can lose some of your best Squad E members. 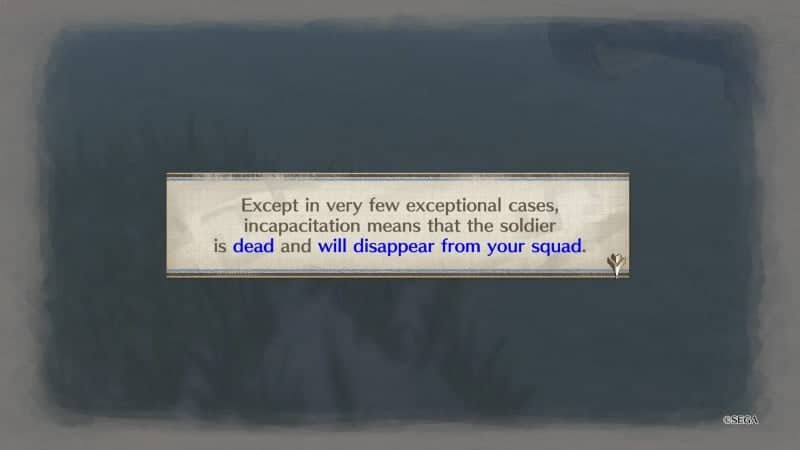 This, however, does not play out the same for the most times with the main members of the squad.  It can mean a game over depending on the mission requirements. However, if Claude falls for any reason, the game is instantly over. This system has improved from the very first Valkyria Chronicles game to now, however, RNG has been around since then. If the player has ever played X-Com, they will know RNG and how it can work against you, even with the best equipment.

This is all coming from my experience with the Playstation 4 version. I do plan on playing the Nintendo Switch version when I can. Once I do, I will update this review if there is anything different in terms of gameplay. 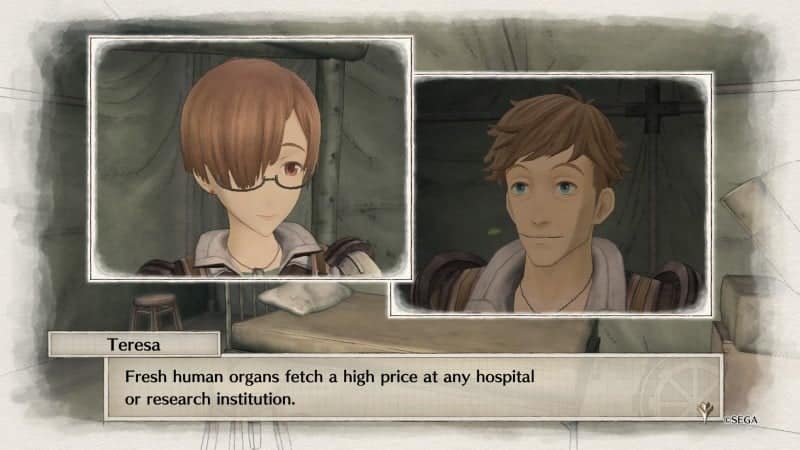 Visually, Valkyria Chronicles titles have always had appealing aesthetics and beauty. This has held true since the Playstation 3 days with the first title. Even the second and third titles on the Playstation Portable looked wonderful on their release. Valkyria Chronicles 4 is no exception to that. It takes that visually appealing aesthetics and improves upon it. It is a wonderful game to watch at work and everything simply goes together. 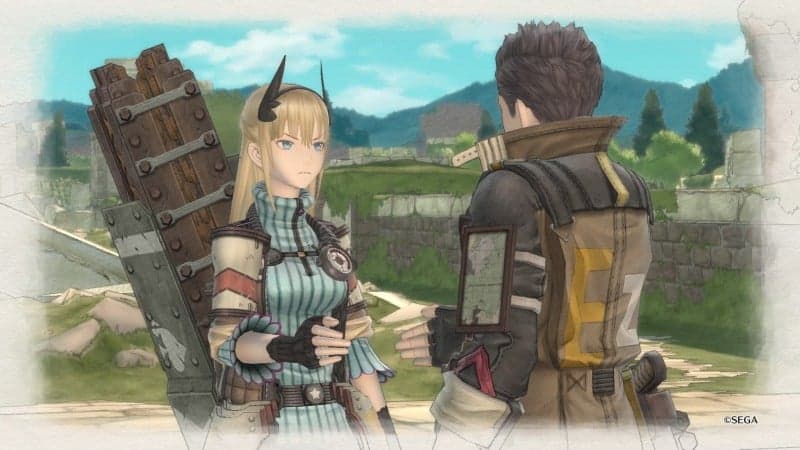 Audio-wise the soundtrack for Valkyria Chronicles 4 is fantastic. Each track brings the intensity and atmosphere that specific mission. Veterans of the franchise will be glad to know the trademark book mode (main menu) track has returned to this title. The soundtrack, voicework, and overall sound do this game justice. There are no real complaints in this department as it flows together with everything else in the game.

Valkyria Chronicles is full of content that is actual quality content. It is not a simple cash grab on “fan service” or anything of the sort. There are a great deal amount of missions to do, In addition, more content is on the way via DLC. Below are the upcoming DLC and a brief look at the current schedule of DLC with release dates. 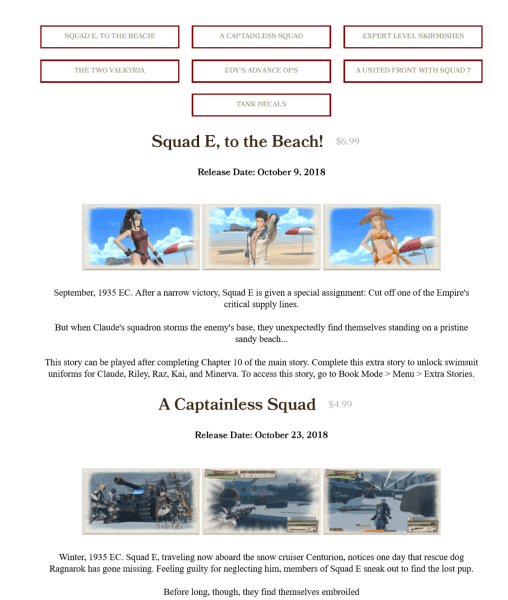 The DLC page is right here if you want to read what is coming as a whole. Click each headline box within the DLC menu to get a brief rundown on all the DLC.  Valkyria Chronicles 4 is rich and full of content. More content is on the way as well. This will keep any player coming back for more. 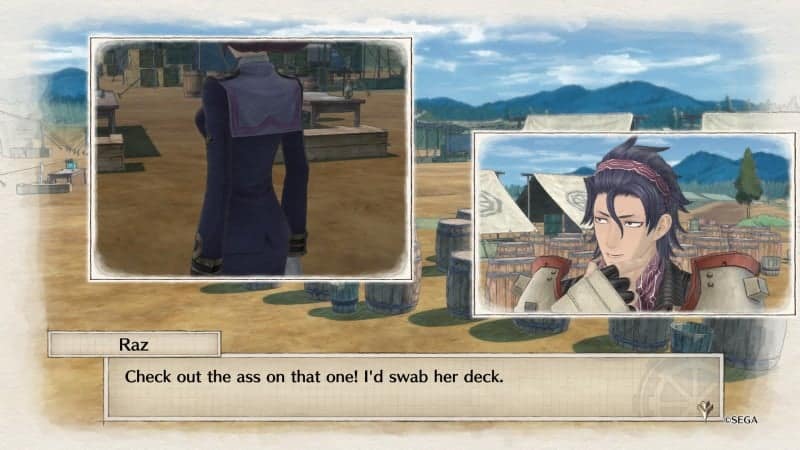 Is the game fun? I can easily report that Valkyria Chronicles 4 is one of the most fun experiences I had this year in terms of gaming. With all of the RPGs, action games, and other genres that are out and about, Valkyria Chronicles takes a tactical game and makes it truly a fun experience. I have easily over 40 hours in the game and I still am planning on going back to add on more to the game.

There are a handful of games that can have me fully immersed. I easily lost track of time playing Valkyria Chronicles 4 and enjoyed every second of it, even when the RNG was not playing in my favor. 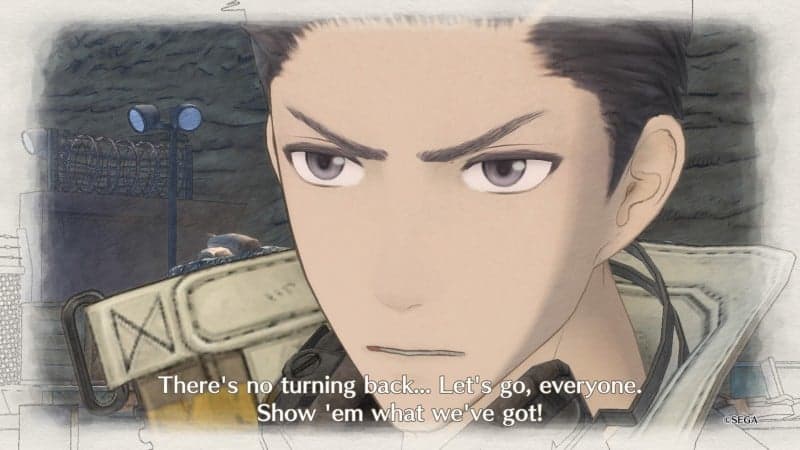 When I first played Valkyria Chronicles in 2008, I knew there was something special about the title. I was hoping we would get further installments. Sega did provide those titles on the PSP in the future, which was adequate. It still had that same gameplay feel, charm, and was portable to boot.

I am happy to report that fans (newcomers and veterans) will love Valkyria Chronicles 4. It takes it back to the roots established in 2008 and improves upon it tenfold. The characters are lovable, the game itself is beautiful, the gameplay is intense, and it is overall a fun game. I can easily place this title in my top 5 games of this year. If you have any gaming device that this title will be releasing on, get this game. 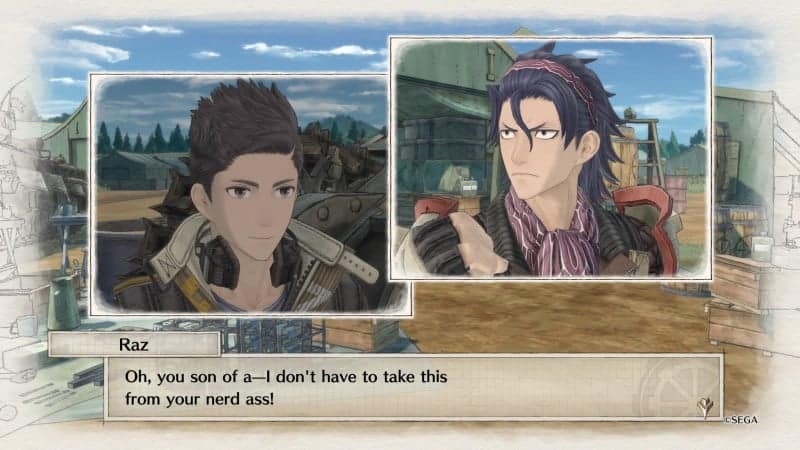 *Thank you to Sega/Atlus for the Playstation 4 review key.*

*The Nintendo Switch version will be examined at a later date. If any components are different, this review will be updated to reflect it.*

A gamer and jack of all trades. I enjoy many things, but overall just enjoying life. Hopefully, I can add enjoyment to your life through my articles or interactions.
@mgs2master2
Previous PlayerNX the homebrew video player for the Nintendo Switch
Next PSVita update 3.69 is out & what does it block!!