Hori man! What can you say about them and their products that hasn’t already been said? Most people love the products that Hori releases. Generally, they’re inventive, well made, and are practically first-party products themselves. However, we have seen some duds from them. And sometimes those duds are either very expensive. Sometimes the inverse is true as well, they’ve made some great things for very appropriate pricing. Today’s product that we’re reviewing from them is the D-Pad Joy-Con for the Nintendo Switch ($26.99). How does it fare as a Switch accessory and should you buy it? Let’s talk about that. 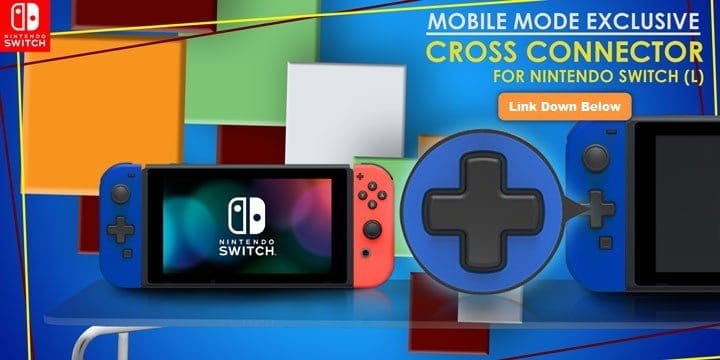 It is the L side controller dedicated to the portable mode. By installing it on the Nintendo Switch body, you can operate the cross button for easy enter commands. The following functions in Joy-Con (L) cannot be used; Player lamp, synchro button, SL button, SR button, HD vibration. This product is exclusive to the portable mode and doesn’t perform wireless communication in TV mode and Table-mode.’ 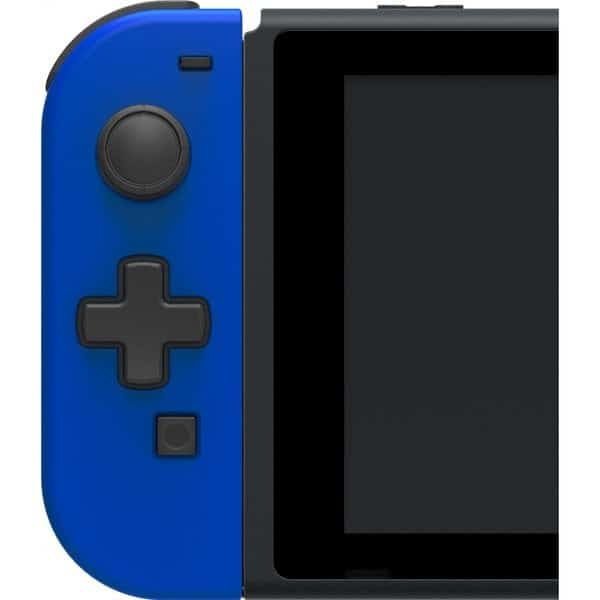 The pros of this cute little D-Pad Joy-Con are many! First of all, the thing that I noticed that not a whole lot of reviews mention are the shoulder buttons. Nobody seems to notice that compared to a normal Joy-Con the L and LZ buttons are more raised. They also have a much more responsive feel and click loudly. I find this to be a pro, some people make scoff and say that it’s a con as there is a couple of millimeters more travel. However you land on the issue is your own choice, but just know that the shoulder buttons are a bit taller.
The other specialty buttons on this Joy-Con are also different from a standard one. You’ll find that the screenshot button, for instance, is now more of a rubbery button. There is also a bit of a divot around the button as opposed to it being flush. Both of these attributes make the button easier to find with your finger so you don’t have to look.  The minus button is also a bit more raised and prominent. It’s also rubbery too so it can be found easier with a finger. The caveat to that feature is just that it makes it more prone to wiggling back and forth and could possibly break off in the future.
Another great thing that I noticed was that the body form factor is the same. So the buttons may be taller and easier to press, but they’re still the same shape. Which meant I was able to use this in any of the accessories that snap onto the Switch. Especially the Satisfye SwitchGrip Pro (click here if you want to read that review). I had Joy-Con sleeves, Joy-Con snap on covers, Joy-Con skins, and they all seemed to work just fine. The catch is that the back area where the release button is at just has to be open to press the original button and not be covered up with a cover rubber button thing. So I’m guessing it won’t work in 100% of accessories, as I don’t own every accessory. But I went into this review thinking that it would work with zero of them and I was wrong!
Speaking of the button on the back to release the Joy-Con, it is larger on this Joy-Con. And the button itself isn’t just larger, but the little surface around it is jutted out more as well. So this definitely makes for taking the Joy-Con off tremendously easier. The other added benefit to that is that you get the easier release at no cost to your comfort. It isn’t like it sticks out so far that your secondary fingers that are on the back get irritated.
As far as how the D-Pad itself feels, well it’s pretty good. Usually, Nintendo goes for a flat, plus shaped D-Pad. The D-Pad that Hori made here didn’t follow that tradition. What you have here is more of a dip in the center of the directional pad. This will make it so that you don’t just press one of the four directions if you don’t want to. Sure, you can take the time to press any of the four ends of it. But now you have the option to rest your thumb in the middle of it and rock it whichever direction you’d like. This makes for easier diagonals and rolls when playing fighting games.
And that’s a good transition for the last pro of this section. This thing works great in fighting games! Whoever would’ve guessed that that was the case!? I tried it in Street Fighter 2, Brawlout, and Blazblue Cross Tag Battle. Of course, why stop there? So many classic games from past consoles that had a D-Pad have had their titles brought to the Switch. Everything from Dreamcast shoot ’em ups to platformers. I tested some shmups, Tetris, and some platformers. They all played fantastically! Now, there are some games, even retro ones that benefit more from simply using the stick. But I feel like not everyone would agree with that, so just know that if you love D-Pad for everything, this is an awesome treat. Heck, I even tried it out on Mario Kart 8 Deluxe and it was very responsive. I feel a greater sense of control over all. 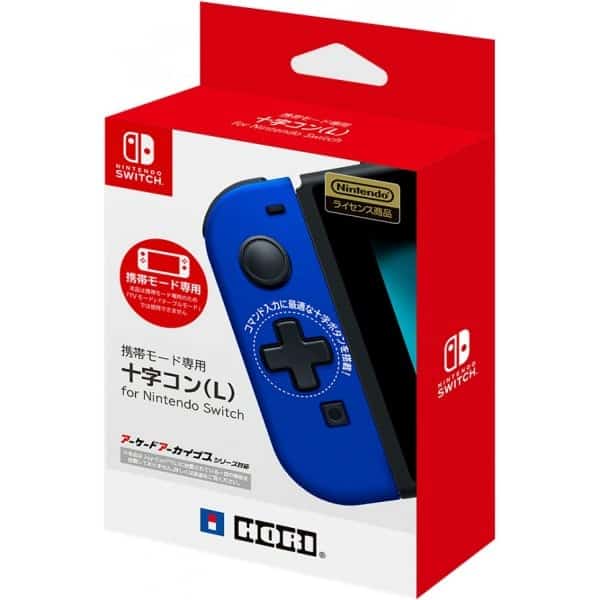 The downsides here color options are few, but stand out pretty obviously. The first one is that there are such few color options. I really had wished that they had just made the same colors as existing left side controllers that are full color. My guess is that Hori wanted to maintain the right to choose which color that they make their products. So far we only seem to have three colors in total. We have the primary blue color that I reviewed, a red Mario themed one, and a black Legend of Zelda themed one. I can only guess if they’ll add any more colors. I’m supposing that they are waiting to see how well these sell.

Next up, there is no battery in the device. That’s right, your Switch has to power this Joy-Con entirely. Which means tons of issues arise because of it. First off, your Switch drains faster. This is true for even if the Switch is just asleep. It still feels the need to power the left Joy-Con. You also have the issue that you can not use the Joy-Con on its own, it must be connected to the device. Not only because of lack of battery, but also lack of bluetooth. Hori would have to make a licensed Joy-Con grip that has a rail in the left side that powers this Joy-Con and then also have bluetooth built into the grip.

One of the more obvious facepalms is the lack of HD Rumble in the Joy-Con. You’ve probably already heard this complaint on the internet. But the reason I dislike the missing feature is because it makes the whole thing feel unbalanced. I feel it in my right hand and not in my left. Some of you may not care. It’s clearly to help save Switch battery life since the Joy-Con itself doesn’t have a built-in battery. And it’s probably also to keep the cost low and affordable. Or maybe it’s because Nintendo wouldn’t license out the HD Rumble feature. Who knows, all I know is that it bothered me so I took care of it. I simply went into the Switch’s settings and disabled HD Rumble as a whole. This not only balanced out what I felt, but it also gave my Switch a bit more battery to live on.

The last piece of the pie is those clicky shoulder buttons I mentioned before. Sure they feel great, I’ll be the first to admit that. What is not awesome about them is how loud that they are. You can’t play quietly on a plane, bus, or in bed next to a sleeping significant other anymore. It’s even more strange for the fact that the right Joy-Con’s shoulder buttons don’t click. So it makes it seem like your right Joy-Con is broken. Or at least the random people on public transit will think your right one is broken. Nevertheless, its got very annoyingly loud clicks. 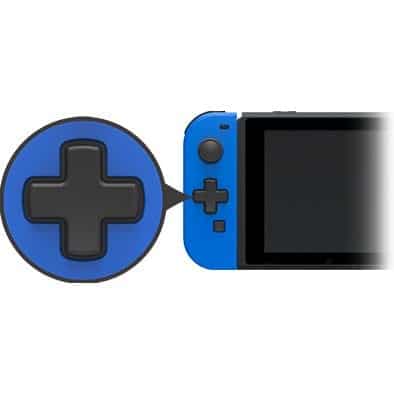 Some of you may have noticed that the pros and cons were about the same. That is something that all reviews seemed to have expressed across the board. The reviews all over the place are pretty mixed. Let’s just say that I wouldn’t use this as a daily driver. I would suggest taking it with you in your Switch case. Just pop it on whenever you feel like playing a game that you feel needs it. Sort of in the same vein of when people only use fight sticks for their fighting games but a regular controller the rest of the time. And for the cost being so inexpensive, it really is worth it. At least it is if you think about it in that regard. 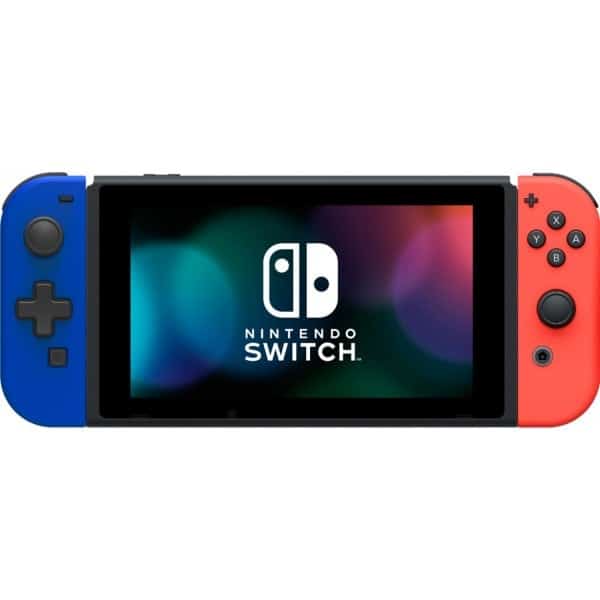 Wanna Buy One? Here’s a link to the model I reviewed. Use code INFORMER for some dollars off!