Another item that we got to look over from the people at Satisfye is the Pro Gaming Grip. This is an Indie GoGo success story that will be for sale very soon. The grip is intended to increase the ergonomics of the Switch and help out people with larger hands. Does it do that? Is it a flimsy device? Does it do anything else other than help you hold your Switch? Don’t worry reader, I got you! 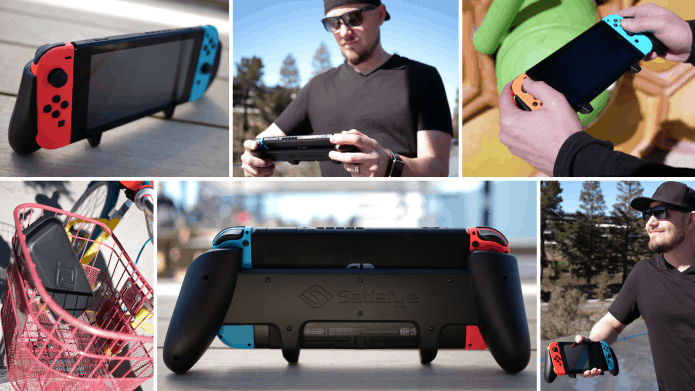 This thing is unbelievably comfortable. If you’ve already played games that require that you grip your Nintendo Switch tightly, you’ll know the hand cramps. Games such as Mario Kart that require tight, clutch moments. Or first-person shooters like Doom and Wolfenstein 2, which have you sliding around the thumbsticks. These games just cause the most serious cramps and whats more is the Switch just isn’t that ergonomic undocked.

It’s technically a square device, and yes, I know Nintendo has always done that with their handhelds. But when it comes to full-fledged controls, you just need more comfort and more curvature in the device. And more importantly, you need more distance between your adult hands and the buttons and/or sticks. This is because the closer your hands are to the buttons and thumbsticks, the more curled your fingers have to be to press them. Versus having something supportive holding your hands out further and letting your fingers lay naturally on the buttons.

So now that rant time is over, it’s clear that what I meant by this SwitchGrip Pro being comfortable. It gives you that curvature that is ergonomically pleasing. It enables your fingers to lie more naturally and your fingertips fall where they touch perfectly on the buttons. No more cramped squeezing of palms and curling of fingers. In fact, all throughout the typing of this review, I keep picking it up to remind my muscle memory what I like about it so much to go in this review. I keep finding more incredible aspects of this grip. Like for instance, the corners of the handles land exactly where an XBOX One controller land in my palm. Furthermore, the handles are rubberized on the back for non-slippage.

As far as how the Switch fits into the device, they’ve thought of everything. Your fear may be that the Switch will just slide into the device and that then you have plastic on plastic scratching. Put those worries aside, because that’s not what Satisfye has done here. You can rest easy knowing that your Nintendo Switch slides into place cleanly. There is no catching or going in at an angle. Secondly, it stays completely centered and unscratched. The SwitchGrip Pro has rubber guides on the inside to keep your Switch from scratching in it. It also keeps the Switch from jostling, shaking, or moving at all.

There are feet on the bottom of the SwitchGrip Pro. These feet allow you to stand the Switch in an upright position. This means that you can do stuff in tabletop mode as you normally would. Not only because the Grip blocks your kickstand. But mainly because the kickstand wouldn’t reach the table and it’s far too small and weak to hold up the Switch and the SwitchGrip Pro. But alternatively, I’ve started just standing my Switch up whenever I need to leave it alone for some time. This is because it just looks dominating and awe-inspiring.

Another benefit to leaving the system upright is that you can also leave the joy-cons in and game still. The normal kickstand just can’t hold up the Switch with that extra weight. This encourages you to remove and play with the Joy-Cons, which can also be annoying. But now you can leave the Joy-Cons in and use a pro controller or some other controller instead. Thus increasing your playing time because your Joy-Cons since you have an extra whole controller with its own battery life. No more popping off joy-cons and setting it in tabletop mode. Much easier than using the kickstand too.

Finally, I have to talk about how solid this accessory is. The build quality is outstanding and I’m just holding a prototype. As long as the final product is even 50% as great as my model is, you’ll be a happy customer, no doubt. Nothing slides around, nothing moves, I haven’t noticed anything coming loose. It’s all plastic and rubber, making it waterproof too. I did notice some differences between my prototype model and the one shown in the crowdfund campaign photos. Obviously, they tried different placements for their logos and verbiage on the device. That doesn’t really change the experience for the end user. But I also noticed that my prototype model has more screw holes on the back. I hope that they stick with fewer screw holes. It doesn’t change anything but the aesthetic looks much cleaner on the photos. 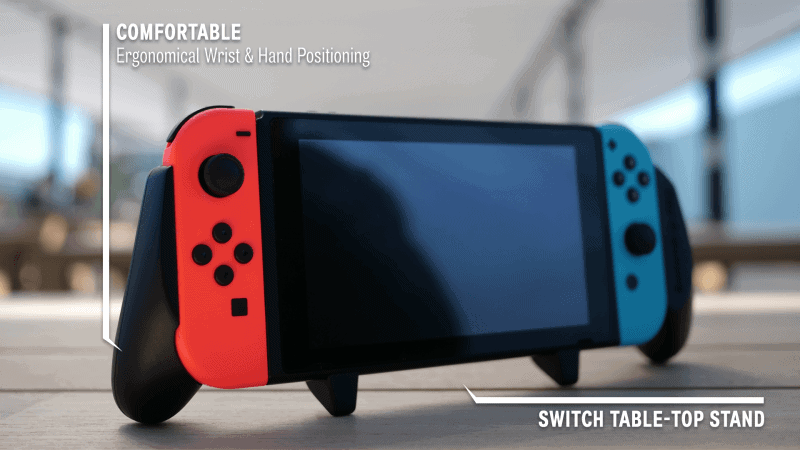 Now there’s not a whole bunch of downsides here, but I know some of you want to know what your money gets you. So let’s be honest then, the Satisfye SwitchGrip Pro obviously increases the size of your Switch. Some people with smaller hands or children may not find this useful or comfortable. I would say that if you’re the average adult, you’ll feel comfort with this.

Where you may be bummed in terms of size though is your carrying case. If you own a Switch you probably have a case for it. I have a case from Satisfye that won’t work for instance. This is fine, you can’t really expect companies to be able to know what you’re going to own in the future and make a case for it all. But if you want a case, there is one from Satisfye. I’m not certain if they’ll be selling it on its own or if you can only buy it in a set. I hope that it isn’t in a set because I know some of us cannot afford to buy everything we want all at once.

It scuffs Switch skins easy is another strange thing that I should point out. Yes, a Switch with a skin on it technically fits. But depending on the quality of your skin could peel up. And if it’s a good skin, it will definitely get scuffed and scratched. This is because the SwitchGrip Pro is exactly to size and your skin is a few millimeters thick and unplanned for. If this bums you out, I would ditch the skin anyway. I did and I’m all the happier about the SwitchGrip Pro being on my device rather than a skin that displays something novelty.

You can’t really charge it all that well in tabletop mode using your normal cords. However, that one is more Nintendo’s fault for putting the port on the bottom. If you have an angled USB-C cord, (L-shaped), then you’ll be able to charge it and use it in tabletop mode. The set that Satisfye has with the SwitchGrip Pro and the case also accounts for the cord. It appears to come with an L-shaped USB-C cord. I don’t know at this moment if that is only for the crowdfund stretch goals or if they’ll be selling the set on their site. But as I said before I hope they sell the whole bundle but also sell the individual pieces for those of us who have to buy one thing at a time.

If you’re someone who wants to leave this thing on 100% of the time, you may have to take it off to charge it if all you have is the dock. Again, if you have an angled USB-C cord, you’re fine. But for the rest of everyone else, you’ll have to take the Grip off from time to time. You also won’t have any access to the microSD card unless you take it out of the SwitchGrip Pro. Yes, taking it out is easy, but a bummer if you had hoped to leave it on 24/7.

Last point that I wanted to make is that this is only a grip with no additional frills or features. There is definitely room on the back of the Grip to have game cart slots and/or microSD slots. Heck, if they wanted to, they probably could’ve added a built-in battery. But they chose not to do that (probably to keep costs affordable for you), on my prototype model it has the Satisfye logo on the back instead. 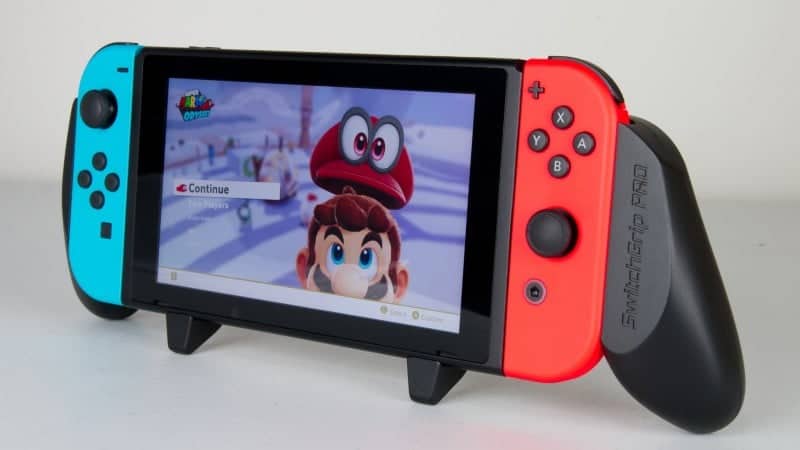 The only reason you should get this is pure comfort. Sure it looks pretty too, but what I’m saying is that you shouldn’t get it for added functionality. I said that it doesn’t have any extra storage slots for microSD cards or game carts, for example. That really should not deter you, if it does though, that is unfortunate. This thing is solid and a trustworthy accessory in terms of longevity. I would even wager that it will last the full life of your Switch if you are treating it just as well as you treat your Switch.

But yes, this thing is designed to keep your hands from doing the Switch Cramp as I’ve come to call it. It keeps your hands and fingers at a more logical distance so that your fingers fall where they should. It’s a comfortable accessory in other regards as well. Its smooth surface melds with that of the Nintendo Switch and if you have a black and grey Switch, the color matches too. I do hope that as this takes off, Satisfye makes versions that match Joy-Con colors. That is a small gripe though for something that is going to stay on my Switch for the rest of my life.

Sure, I had a cons section. But I really think you should ignore it, I bring up these things because I know there are some people that might care. But the point here is that you should’ve seen my face when I was using this thing. Ask my girlfriend, she has had to hear me not shut up about how awesome this thing is. And it isn’t just some hokey Switch grip you would buy at Walmart or Gamestop. This thing is built to last, built to help you play longer, and built affordably at that. 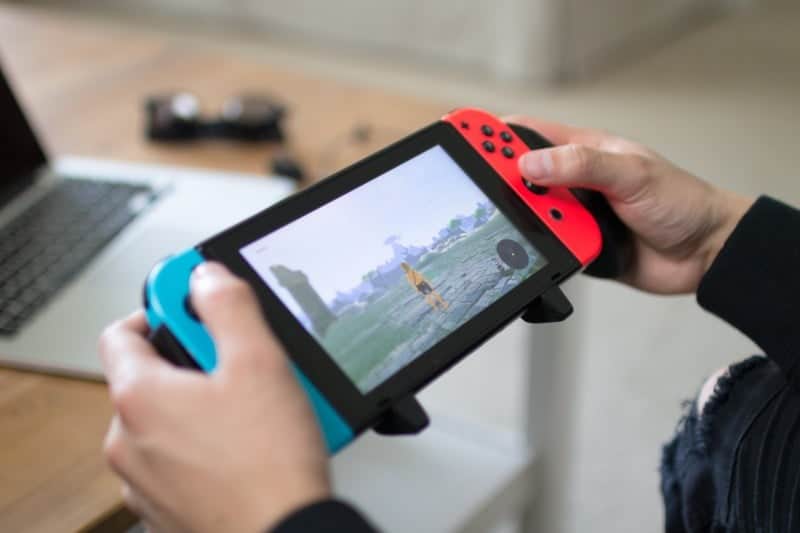