Recently, I’ve been playing a lot of Danger Zone on my XBOX One. I saw that Danger Zone 2 (Three Fields Entertainment, $19.99) was on the horizon and I knew that I needed to try it out. My fear was that it may not be as good as the first one. But I was also hopeful that it built upon and improved upon Danger Zone’s gameplay. Danger Zone, for those who don’t know is a game which is an evolution of the Crash Mode in the Burnout games. This is only logical as the team at Three Fields Entertainment is made up of some of the staff that originally worked on those games! So let’s see if Danger Zone 2 has what it takes to be a household title. 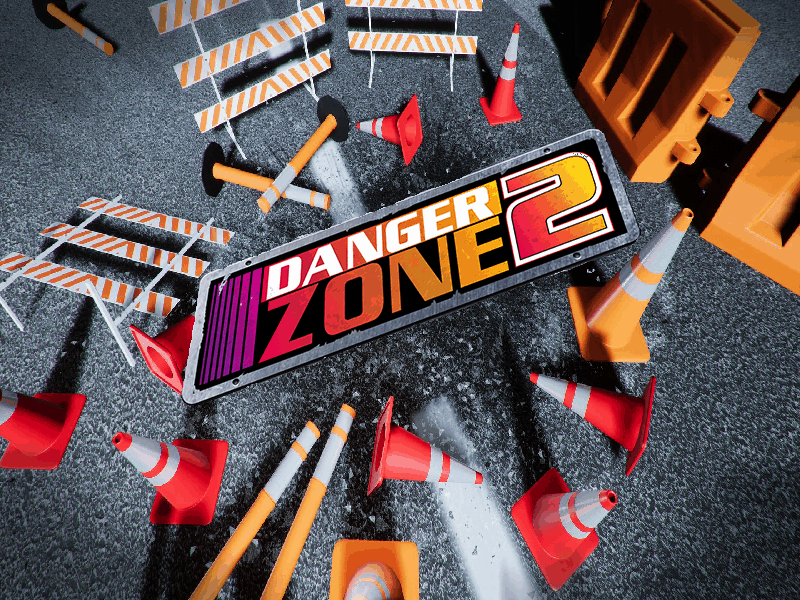 ‘Danger Zone 2 takes the crash testing action out of the Test Area and onto real public roads.

A high speed driving game featuring speed, traffic and crashes, Danger Zone 2 lets players loose onto the Freeways of the USA, the Motorways of the UK and the Autovias of Spain.

Using advanced real world physics and the power of Unreal Engine, Danger Zone 2 lets players ‘crash for cash’ and compete against each other to cause the most chaos on the road.

● Shunt, Slam, Flip, Roll and Jacknife as many vehicles as possible

● 8 vehicles to drive and smash: including a Sedentary Sedan, a Chaotic Coupe, a Really Crazy Taxi, a Euro Truck and a Formula One car

● Objective Based Gameplay – Complete ‘Run Up’ Objectives to earn Bonus Cash in each level.

Danger Zone 2 will be available for digital download on Xbox One and Xbox One X, PlayStation®4 and for PC via the Steam Store.

Right off the bat, I think we’ll talk about the soundtrack. This game, unfortunately, doesn’t really have one. This may be the one and only time that you won’t hear me complain about a lack of music in the title. Why, you may ask. Well the simple reason is because the game is built this way intentionally. I’ll come back to that in just a moment, of course. I want to point out if you ever come across a game where there is no music and you really want some; both PS4 and XBOX One have ways of letting you have a custom soundtrack. You’ll have to google that if you want to know how.

So the main reason as to why there is no music in this title is because of the sound effects in it. Yes, usually sound effects and music go hand in hand. But it’s clear that they opted out for a fully immersive car smashing experience. There are sound effects from the various motors revving to the tires peeling out, to cars being smashed by other cars, to cars crashing into walls. I can’t even list everything that you hear for the simple fact that there are so many different sounds. And then all of those sounds get to bang up against each other! And so the music definitely would’ve just dampened the sounds of the speeding and crushing that is the focal point of this game. Are they perfect sounds? Yes. Are there a lot of sounds? Hell yes. Does it sound like it’s too much at once? No, never. Because it’s such a beautiful catastrophe for each and every crash, you just don’t think about it. 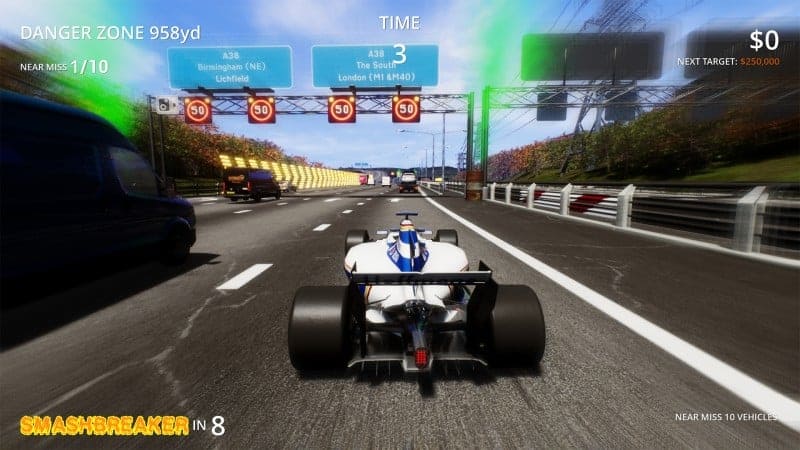 This visuals in Danger Zone 2 seem to surpass the previous iteration in the series. The last game basically featured indoor, simulated streets and city blocks and such. None of which really had the full body and depth as this game does. By featuring outdoor scenarios and miles of road, I feel like this game already kicks ass over its predecessor. The crashes look more on point with a real-world crash. The spark and explosion effects, as well as the burns and smashes on cars, are also a sight to behold.

The cars all look really great in this game as well. And there are a ton of new cars in this game! These cars clearly are not real cars, but they look as though they were inspired by cars. And they look so good and clean and you sort of don’t want to smash them as they look so good! The same goes for all of the target cars. Even the roads have lots of details and their backdrops look nice as well.

Sure, there could definitely be improvements. There are no birds or clouds or anything. But conversely, there is really no reason to have stuff that you’re not going to pay attention to at 100+ miles per hour. I’m sure we could nitpick the game all day. But I think it would be an interesting kink in the game to have weather effects. Maybe for the first time have a New Game Plus where it adds special weather and you have to deal with potential hydroplaning or driving at night. All of which would mean the game would look different on top of playing differently. 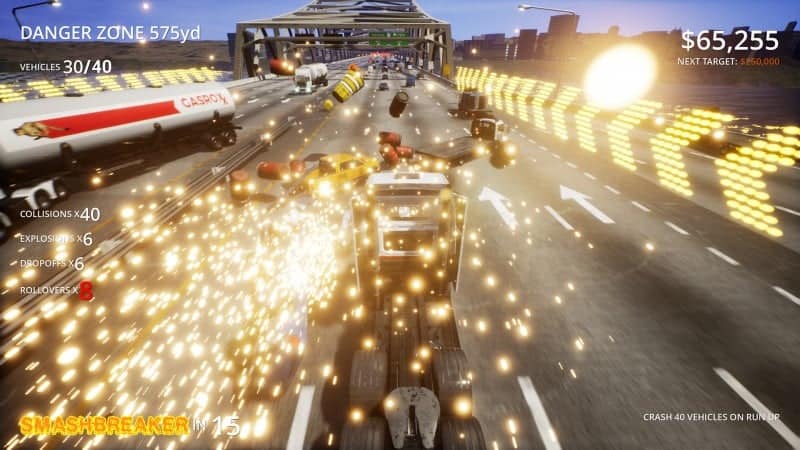 Born from the ashes of the beloved old-school Burnout games is the Danger Zone series. I’ve already mentioned the history behind the company, so no need to get back into that. But it is worth bringing up that they clearly knew that the Crash mode was something that was special. We just don’t get games like this anymore from developers. Everything to AAA game companies has to be flawless and expensive and take forever to make. This game is so arcade that I practically cry every time that I play it. I love how it looks and how those looks transport me back to high school playing Burnout.

All of the beloved fan favorite mechanics are in this game. I’m talking about your near misses, racking up big cash to get bronze, silver or gold, Smashbreaker (formerly Crashbreaker), Power Up icons, chaining together combos, and definitely big explosions. Another feature that they brought back from Burnout Revenge is the “checking” of cars. You can check a smaller car than the one you’re driving. This just means you can use a face button in the direction of the smaller car you see and it will then hit all the larger cars next to it. Think of it like bowling, send the ball into all of the pins and watch them all fall! This game just feels like it could’ve been released on the PS2 and everyone would’ve been expecting it. I’m glad of course that it exists now as nobody was expecting Crash Mode to make a return to form like this!

There also seem to be a lot more ways to increase cash than older games. Collisions were always calculated, but I’m seeing tons of things in this game that I swear have to be new. And if they’re not, forgive my fuzzy memory and at least know that they’re in the game! Things such as how the cars are demolished are calculated. Spins, rollovers, explosions, and drop offs are all in there. Heck, I’m sure that there are more built into this game too that I just didn’t catch. There is just so much to do and so many different ways to earn money. You can tell they were trying their hardest to expand on a game type that can always be improved and made even more fun than its predecessors. The game also has leaderboards built into it, something that never existed way back when. But we’ll get back to that in a moment.

The other thing that I noticed that is newer or just better in this game is how the cars perform. I know that they built new mechanics for the cars. There is better drifting and handling. But also, these cars just drive faster than previous games that have had Crash modes in them. And with more speed also means a higher capacity for greater jumps! Which, as you can tell can also means greater impacts which in turn lead to even greater explosions and more cash!

I think having a first-person view would be delightful if I’m being honest. Or, maybe it could be part of the New Game Plus that I had previously suggested. I believe having a first-person view is one of the things that I loved in the old Burnout games. I loved going down the wrong way on a street in first-person, just barely missing the cars and seeing them just miss my camera. It is the most visceral experience in arcade games such as this. I also think it would be fun if they threw in a custom car builder for the game. I’d even pay for it if it were DLC. I think that that would be a nice touch that we make our own cars or at least can customize the colors of the car in the level we’re about to play.

The downsides of this game must be brought up and I hope they can be fixed with simple updates. But the first thing that I noticed was that loading took a while longer than the first Danger Zone. I’m guessing that this is because the levels are dramatically larger and more detailed. So if this is something that can be remedied, I love this game enough that I can overlook having to wait to play a level. The only more glaring issue that I ran into is that the menus were kind of glitchy. In fact I could never see what the leaderboards showed as they would just keep reloading every half second. It was sort of frustrating as some of you may find competitive leaderboards to be a reason that you play this game. I really hope this gets fixed as it’s basically marketed to me and I can even use it. 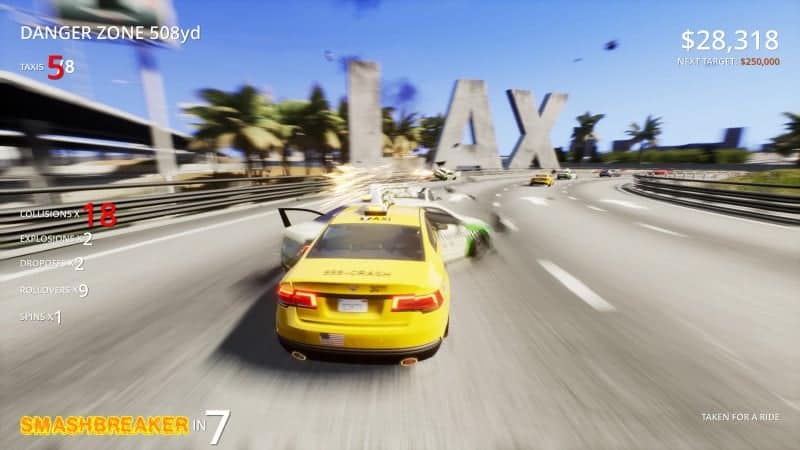 There are 23 total levels in this game, not including the tutorials that you have to tackle first. So there is a lot of content available in Danger Zone 2. And considering each level has a few different challenges contained within it, you could essentially triple the 23 count even higher. It’s going to take you multiple tries to really get a score that is passable to continue onto the next level. As I said before, my leaderboards were broken, so I couldn’t see how well I did compared to others.

There are also 3 bonus levels hidden away in the game for you to unlock. Hey guys, remember unlockables?! Well if you beat the entire game with at least a bronze score on each level, you’ll unlock these 3 bonus levels. There is nothing particularly different about the three levels, you just don’t have to pay money for DLC when it’s already built into the game!

But if yours isn’t broken, you could play each level over and over again until you got the high score compared to other online players. But if yours is broken like mine, the game is great fun. I think you could truly just play it over and over trying to break your own scores. All in all, if the game is working right, there is always new scores to beat and you’ll also find yourself trying to defend your score! 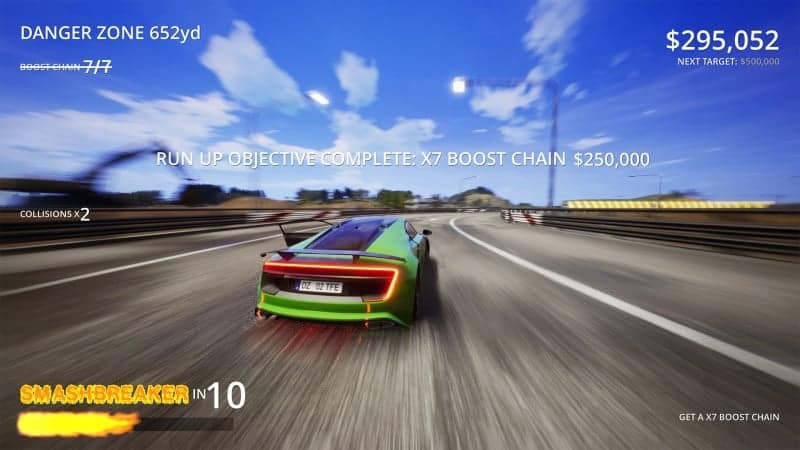 If you want this game for XBOX One, click here.

I only reviewed the console version, but if you want Steam, you can find it here.