Send payloads to the switch with an iOS device!

The wait is finally over! Finally iOS users are no longer left in the cold when it comes to sending payloads to the Nintendo Switch! The creator of the NX Fus’ee Gelee/shefeltz exploit Oliver Kuckertz have made it possible to send payloads to the switch by way of a iOS device!

The only downside to this method is that your iOS device has to be jailbroken with the program Cydia installed, Cydia is a app which can be used to install repos and other useful modifications to your iOS device. Jailbreaks for iOS devices are hard to come by since apple prevents downgrading and steadily closes loop holes that leads to jailbreaks. 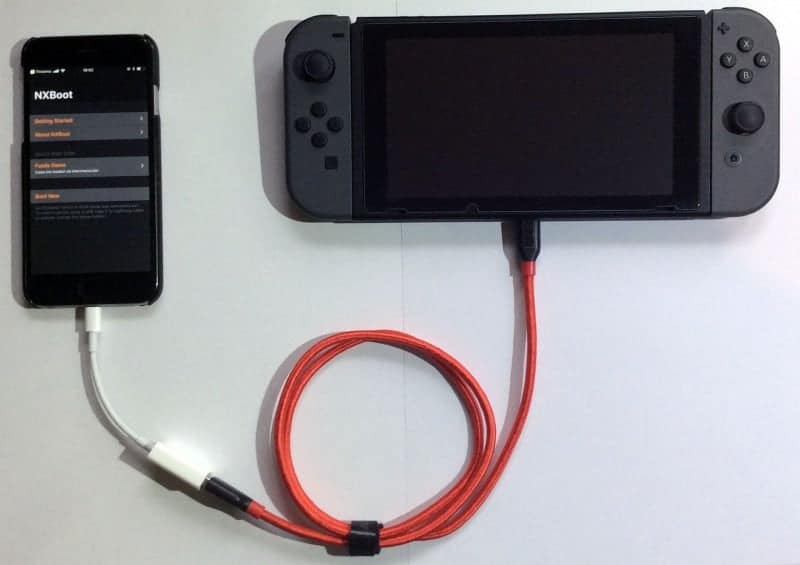 This is nevertheless still exciting news since the majority of users out there including myself prefers iOS over Android. So if you are in possession of a iPhone or any other iOS device that can be jailbroken on a certain firmware including a switch that can go into rcm mode and haven’t been hardware patched. Then this post is for you.

Required adapter to connect the switch to your iOS device.

Note: Lighting cable to usb C confirmed not working in the readme file!

Teaser video of the method in action:

The following requirements are:

3. A Nintendo Switch that can go into rcm mode and was purchased before 7/18.

4. The cydia repo for the NX Boot to send payload files to the switch
https://mologie.github.io/repo/

5. USb C cable that connects to the switch.

What are the iOS hardware requirements?

An OTG adapter on the Lightning end of the connection is required. Setup example: An iPhone 6 with NXBoot, connected to an Apple Lightning USB 2 Camera Adapter, where a standard USB 3 Type A to Type C cable connects the adapter with the Nintendo Switch:

Does it work without a Lightning OTG adapter?

Can you make it work without an Lightning OTG adapter?

Maybe, probably not. I’d be interested in technical details about the Lightning Camera adapter’s internals and how iOS deals with USB host and device mode.

Maybe. I’ve received reports from some people who had success with cheap $5 Lightning OTG adapters, but others did not get their third-party adapter to work at all or had USB communication errors.

Why use your app at all if it requires a $30 adapter?

Because you’ve already got that adapter, or find it convenient, or found a cheap third-party adapter that works for you.

NXBoot was tested and found compatible with all jailbreaks for iOS 10 and later, up to Coolstar’s iOS 11.3.1/11.4b3 jailbreak. It may break if Apple changes some of its private APIs or sandbox details in future iOS versions.

Any first generation Nintendo Switch with any firmware will work. There are reports about patched Nintendo Switch hardware on which the exploit no longer runs, but any switch purchased before 2018-07 should be safe.

Is this app free?

Yes and there are no ads. It was created as a fun experiment.

Is it open-source / free software?

No, not yet. I usually release source code a few months after the initial release to avoid user base fragmentation. (No obligation under the GPL to release this app’s source code exists – it was developed from scratch with no dependencies.)

Can I pay anyway?

How nice of you! I’ve got a public Amazon Wishlist – maybe you find something there that’s in the price range you have in mind. Thanks. Please understand that sending a gift creates no obligation on my part to create a feature or support you with an issue with this app.

I've been a gamer ever since Nintendo first came out with their home console. I've always been intrigued by video games and electronics. The first game I beat was super Mario Bros. I'm in my mid 30s but you are never too old to play video games. I can see myself at 80 years of age still playing video games. I'm always reading and catching up on the latest gadgets, hacks and mods. I'm a family man with a wife and three beautiful daughters, life is what you make it, have fun and enjoy it to the last breath!
@dujuandrock
Previous Earthfall Coming July 13th!
Next Review: SwitchGrip Pro from Satisfye