Sometimes we know nothing about a game. Sometimes we see a game and we know nothing about it, but want to know everything about it once we do. One such game for me was Hyper Sentinel (Four5Six Pixel & Huey Game, $14.99). It looked mesmerizing, it made me miss the arcade games of old, and it made me want to get my hands on it. Well now, I can say that I’ve gotten to do exactly that. But does playing the game meet every expectation that I may have had going into it? Let’s give it a once-over. 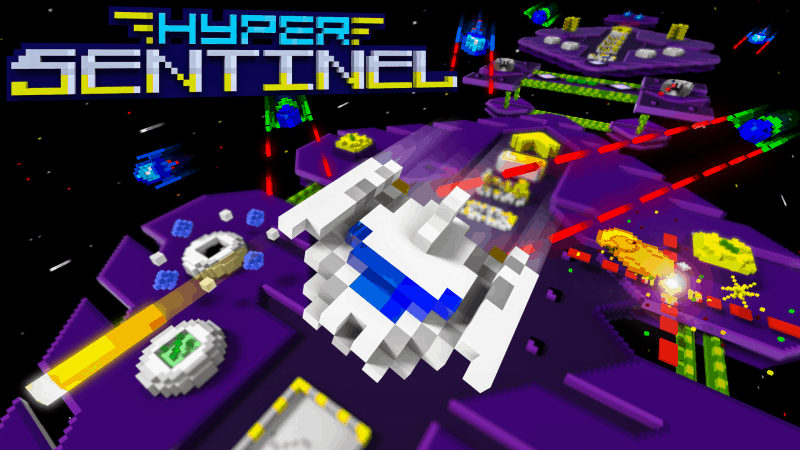 The music in this game is chock full of 8-Bit retro music goodness. Hyper Sentinel is so jammed packed full of songs across the various stages and that makes this soundtrack have a higher rating in my book. What does come off as a bummer is the initial booting up of the game. Upon starting it for the first time you’re greeted with a severely loud song. It was so jarring to hear it for the first time. In fact, normally I leave my surround sound volume on a certain level so I don’t have to worry about it. But this game was far too loud, forcing me to scramble to turn it down. And not only that, I had to turn it way down. My obvious suggestion to you is to turn the volume way down before even starting the game to avoid this issue.

But the annoyances with that song didn’t end with just the volume. It turns out that if you’re navigating through the menus before starting the game, the music restarts on every single screen that you go into. That means you’re going to hear the first 3-10 seconds of the song over and over again until you simply start the game. It’s very obnoxious and I really hope that they patch the game to simply have that song play across the whole menu system instead of restarting on every screen.

Outside of that major oversight, the music in this game is great. But the implementation of it is definitely not fantastic. The songs seem to be extremely short and they loop quite often. The fact that this occurs can really grind on you if you have to keep replaying some of the difficult areas. The last thing you’re going to want is to add insult to injury like this. I ultimately turned the music way down so that I could concentrate on the sounds, which I felt were necessary to hear to get an edge on winning.

In regards to the sound effects, that’s where the game’s audio really shined. Everything had the crisp, crunchy sounds of the 8-bit arcade era. The bleeps, bloops, and blips all come through so nicely and my ear automatically recognized what was what. The single shots, the multishots, the explosions, they were all there in full form. After playing the game for so long I turned the music completely off as I realized that the old arcade experiences that this was emulating never had music anyhow. It was only then that I thought this game was perfect in terms of audio. 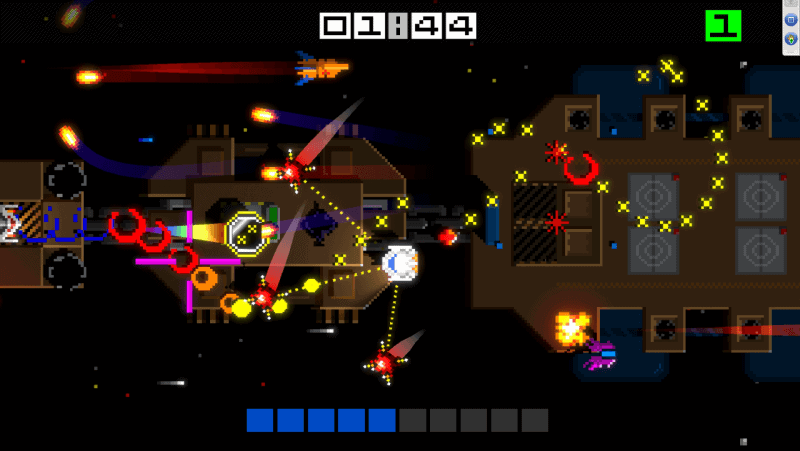 They advertise this game running at 4K with 60 frames per second. Full disclosure, I don’t have an XBOX One X or a PS4 Pro at my disposal to test that feature. They don’t advertise the game at 60 FPS for 1080p, but my guess is that it runs at the full 60. I’m making that assumption because generally if a game runs 4K at 30 FPS, it can run 1080p at 60 FPS. So we could safely assume that if this game runs at 60 FPS in 4K, that it also does in 1080p. However, as I stated, it’s just an educated guess. But the game runs smoother than butter on 1080p so even if it runs at 30 FPS, it looks grand and there’s no dropped frames or stutters.

The main draw of this game to me was its throwback look. It has that Galaga or Xevious vibe about it through and through. And while I’m sure it draws plenty of inspirations from plenty of sources, it’s a game that has its own visual style. The reason that I initially fell in love with it was because of how it looked. I was even further surprised when I heard that it runs in 4K that way as smaller indie teams don’t generally add in 4K support, so that was a mondo plus.

But this game is more than just an arcade throwback. It adds new key features to its visual stylings. The first being that you can actually play the game better because it finally adds what those other games from 30+ years ago lacked, which is depth. This game has you flying your ship above a mothership of some sort. And instead of it being a flat image on top of another flat image, you finally have shadows. This informs the eye that you’re above another object but also informs you if something is on the same plane as you or if they’re on the ship below. This makes strategy easier to form and subconsciously keeps you aware of ground threats.

The other key features, as mentioned before, can be found in the settings of the game. You have some choices available to you in terms of how you see the game. There are three modes to choose from and they don’t seem to stack. First, you have the CRT mode, which rounds of the corners and warps the edges of the screen. This also sort of distorts the coloring of the game. The next mode is ZX Spectrum which not only changes the fidelity on the screen but also the coloring of the pixels.

The same goes for the third option which is to make it look like a Commodore 64 game. The ZX Spectrum and the Commodore 64 didn’t feature a full color scheme so they definitely look strange. However, all of these are not desirable for me. They’re very much novelties and anyone who wants to actually enjoy this game will play with the default settings on. 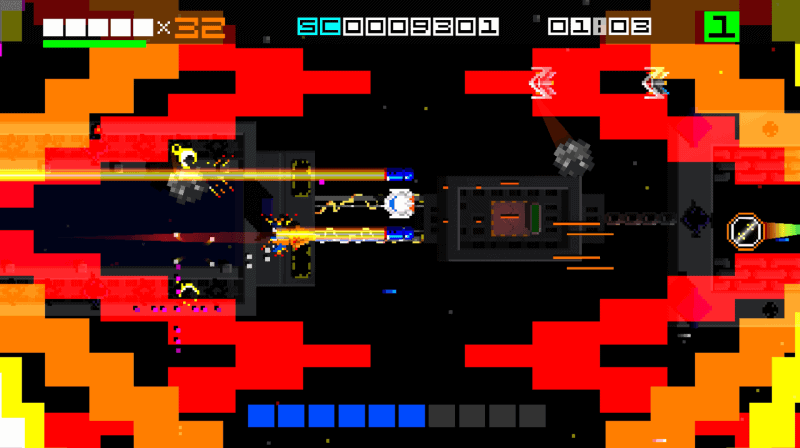 Hyper Sentinel builds upon so many great classic retro franchises and rolls them into one sexy bullet hell conglomerate where the gauntlet is thrown down. From Galaga, to Xevious, to R-Type, to even Star Fox. There’s nothing cute em up about it. This game is an all-out explosion fest that features tons of different colors with extremely large amounts of baddies on the screen at once. So if it combines a metric tonne of elements all at once, what is the actual gameplay?

Well, to start with, there’s no real story in this game, just like games of old. What you do have whatever is a main objective in each level. You’re given what could be considered a football field of horizontal shooting space. There is movement left and right of your own choice or you can go the full length of the field and once you reach one end or the other, the game flips you back around, just like in Star Fox. This means the game can be a nice, long horizontal shooter without having to go the route of making really long levels. The objective, as mentioned, is to destroy all of the ground units on the ship below you. You have to do all of that whilst staying alive and keeping the bogeys off your back.

After finally completing the main objective, you will be greeted by a boss for that level. If you die anywhere during the boss fight or prior to that, you will have to restart the level that you’re on. The bosses are definitely difficult, but they’re never too difficult for the level if that makes any sense. Slowly but surely the level sizes will increase and thus increase the difficulty. This will also be true of the boss of that level.

My favorite part of Hyper Sentinel is how progression works. In normal arcade games, you’re given one level at a time. If you die anywhere along the way the death is permanent and you’re forced back to the beginning. Some games give you multiple lives to combat this or give you chances to earn more lives along the way. This game simply kills you after your health bar is emptied, but you get to restart just at the beginning of the level. This is a far better experience for someone like me who would give up after a few tries. Starting back at the beginning doesn’t inspire me like it does other people. It takes the wind out of my sails and makes me want to stop playing.

What is even better about that system is that even if you turn off the game and come back to it later, you can continue from the last point. This makes the game even more playable for me. The main reason being that if I happen to quit because I’m tired of playing a level like 12 times in a row, I can at least come back to it later. Sometimes it just takes walking away from something and coming back to it later after feeling refreshed and this game gives you that satisfaction. 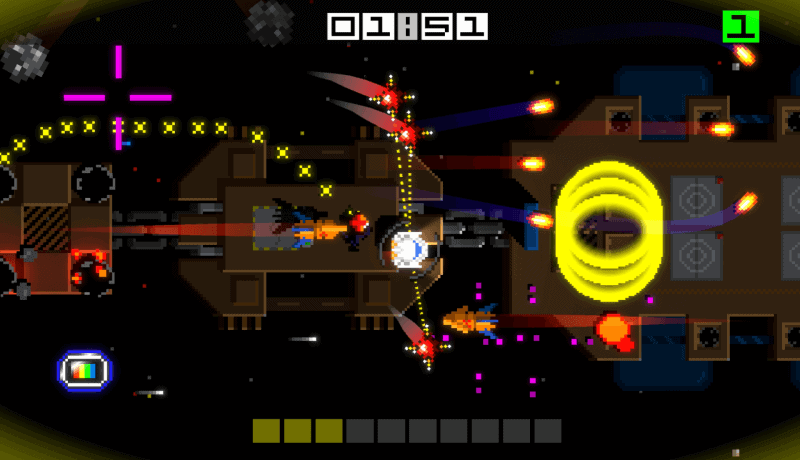 This game has 12 separate levels contained within it. There are three difficulty levels to choose from as well. If you wanted to get all 60 medals available, you’ll have to tackle this game repeatedly across different difficulties. So that’s one sure fire way to play this game for a long time and get your $15 worth. But there is more to this game in way of some other modes that will keep you playing for basically forever.

After you’ve beaten the game you unlock said modes. Up first, you have Boss Run mode. This is referred to Boss Rush mode on other games and is the same in concept. The idea here is that you can play all of the bosses exclusively without the need of playing through the regular baddies first. This is probably there for people who stream and/or people who are into speed running things. This mode is probably pretty intimidating to most, myself included. But maybe it’s the thing that will convince you to buy the game. For me, if a game does or doesn’t have a boss mode isn’t a deal breaker.

The other mode that is in this game is sort of the opposite of Boss Run mode. It’s simply called Horde Mode and unsurprisingly, it has the same theme as the Gears of War version of Horde mode. What you’ll get here instead of every enemy being a boss is that every enemy is the standard enemies. And in this mode you’ll find that the object is to stay alive as long as possible. The waves of enemies are endless as long as you keep living and the score is your length of time alive. So basically, this mode makes this game evergreen and technically can’t end as long as you keep living! 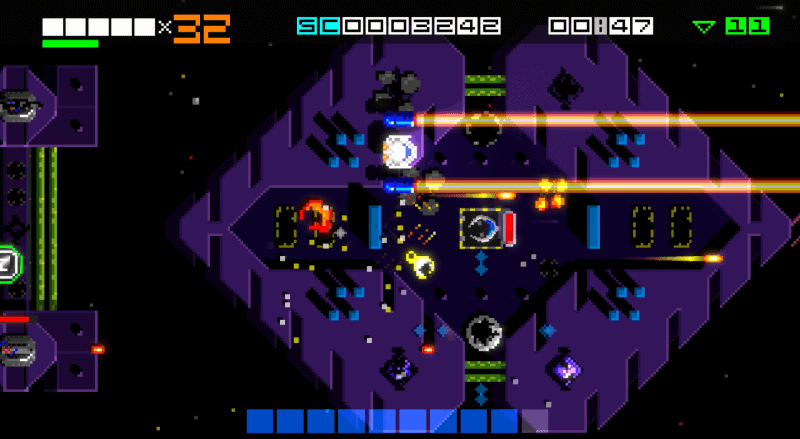 You may want it for Steam if so, click here. 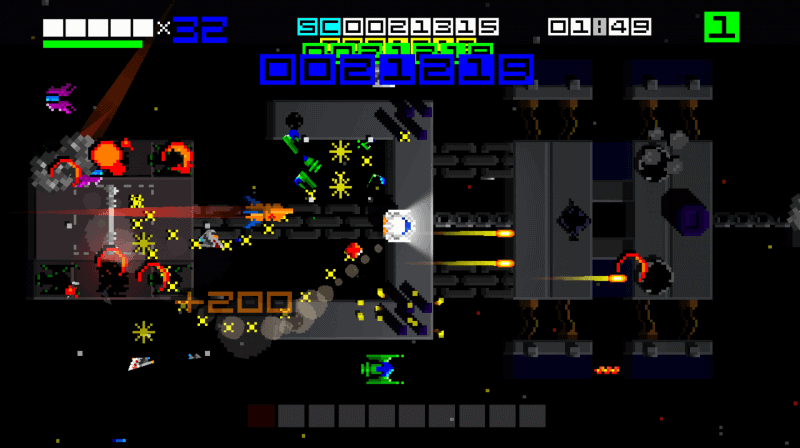