Teenage Mutant Ninja Turtles for NES is a platforming/action game released by Ultra Games which is a shell subsidiary of Konami released in 1989. I consider this game severely underrated and it’s probably the most hated TMNT game by a majority of people. When people think of TMNT games they think of the beat’em up arcade style games. But trust me this is one game that you shouldn’t pass up.

The Ninja Turtles (Leonardo, Raphael, Michelangelo, and Donatello) are on a mission to retrieve the Life Transformer Gun from Shredder, a device that could restore their sensei Splinter back to his human form. (And let me tell you Splinter looks better as a rat.) 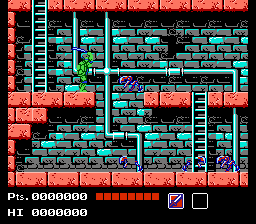 How the game crawls along

The Turtles’ first objective is to rescue their reporter friend April O’Neil, who is being held captive by Bebop and Rocksteady somewhere in the city. After rescuing April, the turtles must swim underwater to disarm a series of bombs set to destroy a dam, rescue Splinter from the Mecha Turtle, destroy a giant Mouser, find the Technodrome and eventually defeat Shredder.

Each turtle is unique, even outside of using different weapons

Each turtle’s unique primary weapon has different speed, power, and reach. The jumping in the game is a little different on how you should approach it. Tapping A makes you do a bunny hop, holding A down makes you do a high jump, and the medium jump has a sweet spot in between tapping and holding down A. Once you master the jumping it makes the game a little easier. To switch between Turtles you simply hit start and go up or down with the D-pad to select the desired turtle. 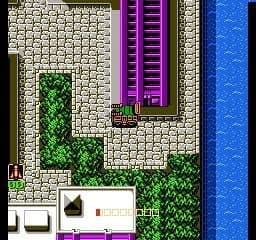 “THE WORST MOST HARDEST NES GAME EVER!”

TMNT has a bad reputation as being a very challenging and dare I say hard game. I admit the controls of the game are a little clunky but manageable with a little practice. And that’s probably the big complaint that people have about this game. (That and it not being a beat’em up.) Most of the enemies in the game are not featured in the cartoons or movies which a lot of people hate. But one thing everyone can agree on is that the music in this game is fantastic!

As a kid, I could never complete the game but I would always pop it in my NES to try to get farther. Back then I liked the game but I didn’t love it. But coming back to the game and playing it as an adult I absolutely love this game! I don’t find it as difficult as I did when I was a kid but there is one part of the game that is either make or break. I call it “the yellow hallway of doom” and is located in the last level which is inside the Technodrome.

If you can make it here good luck! The flying jetpack men in the yellow hallway come at you in pairs and shoot lasers which take away two bars of health for every hit dealt to your turtle. But if you can get past there then you have a very good chance of completing the game. Shedder is not too challenging if you use Donatello and position him at Bo’s length of Shedder.

Worth you bringing the retro goodness out of its shell?

Overall the music is great, the controls take some time getting used to, and visually it looks better than most NES titles that came out that year. I consider this game to be a hidden gem in plain sight. I may be a little biased but I give the game an overall score of 7/10. If you want to see this game in action and want to get more in-depth I usually stream it once a week (or more lol) on my Facebook page Super Retro Game Time.

Previous Take a dead laptop and turn it into an inexpensive display
Next XBOX One Review:Super Lucky’s Tale: Guardian Trials DLC