Today, we’re going to take a look at one of the first wireless controllers that came out for the SNES Classic. It also works on NES Classic and with Wii Remotes on the Wii as well. So I thought now that it’s been out for a minute and the hype has died down that we could give it a look. Is it worth it? Are there any deal breakers right out of the box? Should you get a replacement for your SNES controller for your SNES Classic even though it comes with two already? Let’s get into it! 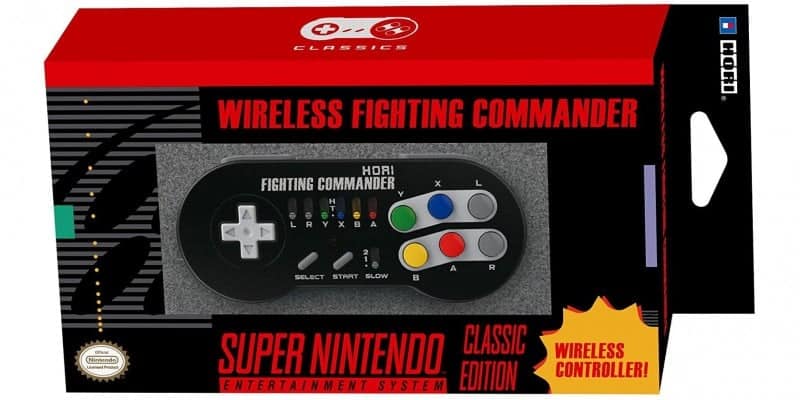 ‘Officially Licensed by Nintendo. Enjoy your Super NES Classic with the modern convenience of a wireless controller! Packed with features, the Wireless Fighting Commander by HORI has a six-button layout that is perfect for fighting games. Enjoy a classic Slow-Mo function and Turbo can be independently set for each button. (*Requires two AA batteries, not included.) TO SYNC: CONNECT DONGLE TO CONSOLE AND HOLD START BUTTON FOR THREE SECONDS’

Hori’s SNES Fighting Commander definitely has some shortcomings. And obviously, we’ll talk about those in the next section. But there are plenty of upsides to the controller as well. For example, the glaringly obvious addition of more face buttons. This thing features a 6 button layout. The additional two buttons are for the left and right trigger. So if you have a fighting game that uses all four face buttons and both shoulder buttons, you can now play those like Sega fighting games. There are also some delightful little switches on the front center. You have the ability to make the controller go into turbo mode for any of the six buttons. You also have the option to make the controller think that you’re holding down a button indefinitely. Naturally, these aren’t switches you’re going to mess around with mid-fight unless you’re quick. Pause the screen and in most instances, the buttons that you’re setting to turbo or hold, won’t affect the pause screen. Then unpause it and play!

I found this game to be better suited for platformers and puzzle games more than anything. We’ll get to why that is in the cons section. But the easy to sync up controller features 2.4 GHz wireless connectivity. This is a real delight and the fact that you can be further away from the TV than you would with a wired SNES Classic controller is all the better. I can now lay on the couch and play games comfortably. Before I would either have to pull up a chair or sit on the floor between my couch and TV. The wireless controller never seems to dip, drop out, or cause any input lag either. I was sitting there waiting for it to happen. It wasn’t until the batteries started dying that I started seeing any type of disruption. But don’t ask me how long the battery life is because it requires that we choose our own AA’s. That means if you buy better stuff than I do (I’m cheap), then that’s going to be all the better for you.

The body style is also nice on the Hori SNES Fighting Commander. The battery compartment doesn’t get in the way and the space where you put your hands is nice and round. The D-Pad feels like it’s comprised of a nice soft plastic. It has no sharp corners like some third party NES/SNES controllers have. You’ll also notice that when you touch the face buttons that they have convex shape too them. You might also notice that they are ever so slightly wider in their circumference. My guess is that Hori is really trying to hit home the fighting game factor. I’m also going to wager the guess that Hori knows that a majority of customers are going to be older males aged 25 and higher.

My first complaint here is all aesthetics and not about the controller itself. It’s about the actual wireless dongle for the controller. You may normally see the FCC printing on the bottom of dongles so that you may have all of that hidden when you plug a dongle in. Hori must be a different company with their chosen practices. They decided to print all the FCC verbage on the top of the dongle. In other words, normally you’d think that all of the FCC wording would be on the bottom and not ugly. But they printed it all on the top side. If you don’t need the words, and they really bother you, here’s a quick fix. Take some inexpensive spray paint and give the words a couple of blasts and it all goes away. On the other hand, it may not bother you at all, but to me, it’s ugly as sin.

Another, more important, con here is the primary complaint that you’ll see on Amazon. The controller is touted as a Fighting gamepad, but really, it isn’t. Now, what do I mean by that? Well standard fighting games on the SNES up until today even really have lots of diagonal presses and quarter circle turns on it. If you’re not playing on an arcade or a fight stick, your next best bet is a solid D-Pad. And while this controller does indeed have a D-Pad, there is just something about it that really doesn’t allow you to get those diagonals. I feel like I’m definitely pressing them, so it isn’t a physical issue. I’m thinking it’s something that comes down to the wireless connectivity, maybe it can’t relay so many button presses simultaneously. 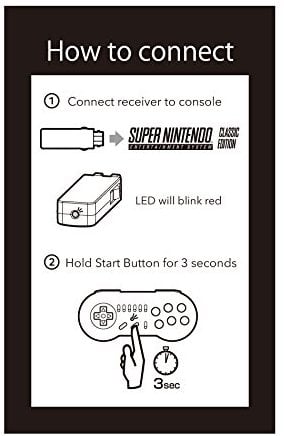 While its cons are outweighed by its pros, this controller may be too pricey for what you’re going to end up getting. Hori should’ve stuck with a tried and true four-button version of this controller and priced it at $20. I respect that they shot for the moon, but they missed the mark in terms of fighting games. If you find $25 to be a good price for a great, wireless, easy to grip controller for practically every other game for the SNES, get this. If you’re wanting it exclusively for a fighting controller, do yourself a favor and stay away from it.