Every year Naka-Kon takes place in the Midwest and is known far and wide as the go-to Japanese and Anime convention. People come from all over the place to meet up, see panels, participate in the cosplay competition, see live music, all in the name of Japanese culture. This year, naturally, was no different. Was it great? Do they need to improve upon anything? Is there something more that I would like to see? I don’t know…scroll on down and find out! 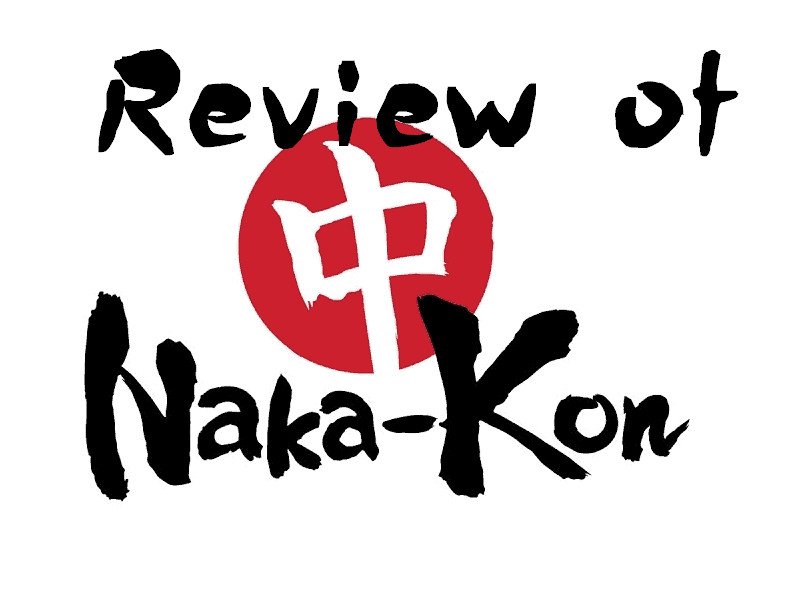 The sheer quantity of games and gamers this year was immensely greater than last year. I can give credit to Naka-Kon for both. Having a great variety of games really lends itself to getting more gamers out to the convention. Even if you aren’t into Japanese culture, the convention itself gives you a heck of a reason to show up with it’s gaming. I wish I’d had more time to participate in the gaming. But I did get to play some Dance Dance Revolution in one room and some Mario Kart 8 Deluxe in another room. I didn’t even get to play stuff in the other two rooms, so yeah, I’m super sad. But too much content is leaps and bounds better than not enough. And when Tokyo Attack is in the building, it makes the event that much better. Below is a compilation of stills and video of the gaming that went down this weekend for Naka-Kon 2018.

I would’ve loved to have had enough time to attend every panel that existed. But since there was so much to do, which is a good problem to have, I tried to maintain finding ones that were relevant to our site here. So naturally I attended as many voice actor panels as I could. I got to start off the whole weekend right by going to see Mary Elizabeth McGlynn. She was so lovely and charming and despite having a less than prepared interviewer, she worked with it and never missed a beat. Her love for what she does really gave her a glow that not every person of her profession(s) seem to have. She wasn’t jaded or cynical, she was very funny, and she loved the local cuisine. What more could you want?!

We also had the chance to visit the panel where we got to see voice actors nerd out. It was a panel in which Steve Blum, Ian Sinclair, Wendy Powell, and Mary Elizabeth McGlynn all came together and talked about what they loved in their past. What really made them geek out and truly inspired them in their more formative years and even through today. The house was packed, so we ended up sitting off to the side and getting footage as to not block anyone’s view. You’ll find that footage in the Walkabout Video further down this article.

Autographs really were fun as well. We couldn’t get a Steve Blum autograph because his tickets were gone long before we arrived at 10AM on Saturday and Sunday. Which is all too understandable. But we did manage to make it into the line for Sean Chiplock and Mary Elizabeth McGlynn. Sean was a kind and humorous guy. We brought him a  copy of The Legend of Zelda: Breath of the Wild. He marked it with a great quip, “Keep your goals lofty!” He then signed his name and wrote in the names of the various characters he voiced in the game (that Deku Tree though)! Mary Elizabeth was also an absolute thrill to meet. She would talk up anyone that she could and was very generous with her time. I got her to sign off on one of my favorite entries in the Silent Hill saga, Silent Hill 3. She brought up some song lyrics and explained some more back story behind it! 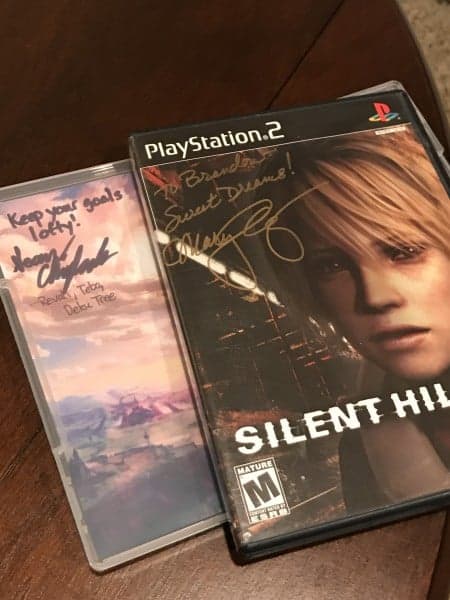 This is my first time attending Naka-Kon in a press capacity. I have visited the convention several times before, but this time I really had to pay attention to a lot. That task in and of itself is a hard thing to do. It’s difficult to be everywhere at once. So I won’t just bring up things that I notice as new, but maybe things that have been done in the past, just in a new and improved way. Or maybe something that has come back from a previous year that maybe wasn’t done last year.

The first is all of the beautiful gaming in the full on gaming spaces. I’m talking the whole bottom floor of rooms in the Overland Park Convention Center was chock full of games. There was Pachinko, couch co-op, local multiplayer, rhythm arcades, fighting arcades, retro arcades, and of course, tabletop games. There wasn’t a square inch of wasted space between games and gamers, the whole place had a fun buzz about it. I used to have a mindset that games were a lame addition to conventions. Why pay money to do things that I could do at home for free? But don’t worry, I get it now. I understand the competition, the comradery, the coming together of people who would not have normally have met under regular conditions. Not to mention that the games that you find at these events aren’t always ones that are at your home or even in your local arcade/barcade.

I also thought that the nice balance of cosplay panels, 18+ panels, notable celebrities, and other activities this year. I felt that last year had a little too much cosplay and not much else. But this year we got to have a great mixture of so many things that made Naka-Kon great in those more previous years. I felt that if I was getting too bored with listening to cosplayers, I could visit an 18+ panel, but we also had more than one opportunity to dance. And if there was a chance that nothing appealing was happening, there is always some type of gaming available as I mentioned before. So yeah, I thought this year was so much more varied in terms of content.

Going back to the 18+ aspect of the convention, this year they found a way to streamline the process. Last year, I remember being in a line for more than one 18+ show and they required everyone in line to take out ID’s to show. This was something that slowed down the line as the Naka-Kon volunteers who were tasked with managing the line were burdened by having to do math for a lot of ID’s to make certain that they didn’t allow in someone that was too young, despite how mature they may have looked. It just took far too long overall. This year however, it was leaps and bounds more efficient. They set up a table where you could get a wristband if you were 18+, that way they could see your wrist and let you into any 18+ event. And if you happened to not know that you needed a wristband, you could show an ID, but that wouldn’t slow down a whole line as much as everyone showing an ID.

There were plenty of things that stood out, both good and bad. Obviously most of it was better than good, they were great. I’ll start with downside first as it’s the only one that I really noticed in the whole convention. The autograph tickets are listed as first come, first served on the autograph/lining up rules. However the tickets are numbered and so Naka-Kon staff were getting people to line up in order by number which was devastating for the people who followed the outlined rules. Plenty of us had the sentiment that if we were numbered and needed to maintain numerical order, the rules would’ve stated such. In the rules it mentions that there are ticket numbers but in none of it (like, at all) does it mention that they’re the order in which you have to line up.

“Inari Tickets: The first 75 tickets for a given session. Attendees with Inari Tickets will be guaranteed an autograph, and will go through the line first. Yokai Tickets: The last 75 tickets for a given session. Attendees with Yokai Tickets are not guaranteed an autograph, but are able to wait in line during a session in the chance that enough time is available to get through the line…Tickets will have the specified guest, date, session time, and ticket number listed. Only the ticket for the correct session may be used to enter the line. Inari Ticket holders line up first-come, first-served; Yokai Ticket holders line up in order of ticket number.”

As you can see, they specify Inari tickets versus Yokai tickets. Even if they misspoke in the rules, there still should’ve been some more organization. Random Naka-Kon staff were doing it at different times and then not following up to see that it was done. But I definitely digress, as I’m not trying to paint a negative picture here. Everything else that stood out about the convention was, to me, a great time.

This is a video comprised of stills and time lapses from different areas of the convention. There is also video taken from the vendor hall as well as some quick footage from the aforementioned nerding out of the voice actors! I think you’ll love it, so without further adieu, enjoy!

I think that overall, the convention should really think about moving into a larger space in the coming years. I mean this because I have a love for Naka-Kon. It’s a known thing that people dislike change, but I really would love to see what the con-runners would do with more space. I feel that this may be a smart move as conventions are about the only thing I can think of that need to expand and evolve with their natural growth. Otherwise you risk losing people because of their inability to have fun just due to being cramped. But I think that Naka-Kon would be really inventive if they had some more space, they also wouldn’t run the risk of running out of seating for their panels that have longer lines.

Other than that, I love that they learned from 2017. I told myself that if 2018 suffered from the same issues as 2017, I wasn’t going to return for 2019. Having said that, they had more relevant panels, more notable celebrities, more games, and more quality overall. I really think that they were hitting on all cylinders this year. And if everyone else who felt the same way goes and tells their friends that they should attend next year, we’re bound to see a massive influx of visitors next year. The great thing is that the gaming spaces seemed to be bigger than ever with wall to wall gaming of all types. Everyone appeared to be respectable and worked with everyone else.

Due to WordPress, I lost this article two separate times. But Naka-Kon means so much to me and the local community in terms of what it stands for, that I still decided to continue on. It’s so devastating to lose work, then write it again, and then lose it again. I really knew that this article was important as it lets people who couldn’t make it know that the team that runs the con is really trying hard to improve. All 3 days really had a different feel and vibe to them too instead of feeling stagnant or similar. Everything was so switched up that it felt like a nice shuffle that makes a person really want to come back for more!