You all know me, I love video games! And the game I’m reviewing for you all today is an arena-style twin-stick shooter ported from Steam to the XBOX One, Nintendo Switch, and PlayStation 4! That game is Tesla vs Lovecraft (10Tons LTD., $14.99) and it is unlike any game that I’ve ever laid my thumbs on! So let’s skip over all of the pleasantries and jump right in! (Seriously, this game is really fun, you’ll see). 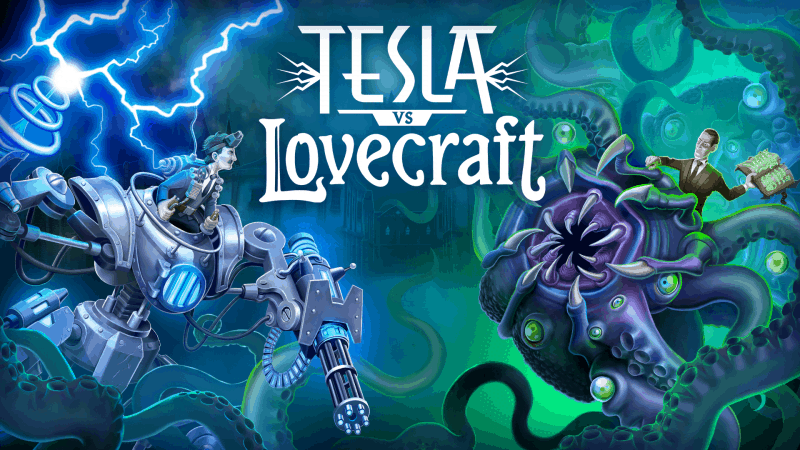 ‘Tesla vs Lovecraft is all about high voltage, high adrenaline, high firepower action. It’s very gratifying to mow down waves of eldritch abominations, build up your power, and finally call down the mighty Tesla-Mech battle robot to deliver the killing blow with gargantuan firepower.” says Tero Alatalo, CEO of 10tons.

Tesla vs Lovecraft is a twin-stick top-down shooter where inventor Nikola Tesla squares off against horror author H.P. Lovecraft and his monster minions. With the Quantum Teleport backpack, the player is able to teleport a short distance to any direction, even through walls and monsters. The player is also able to activate the Tesla-Mech battle robot, which grants an immense but short lived boost in firepower. A hefty arsenal of conventional and scifi weapons, powerups, special abilities, and selectable perks is also present.’

The audio in this game was definitely, definitely cool. There was a wide array of standard weapons from the older era that this game takes place. But there were fully scifi sounding weapons as well. This is true as well for the creepy crawly bad guys that are swarming you at all times! I loved the fact that there were so many different scifi aspects as you can tell that the sound designers had to have had a blast creating these sounds for their game. It was the sole driving force to get me to want to get further and further into the game. I wanted to meet more enemies and use more weapons and such to hear what they would sound like. And it’s like a beautiful demented song to hear lots of weaponry going off whilst aliens and demons die at the same time! This game certainly is a treat for people who love high quality sound effects and love science fiction.

In terms of the soundtrack, however, it’s a slightly different story. I’m such a huge fan of video game soundtracks and this game certainly didn’t disappoint in terms of the songs that I heard. Sure, they were limited, but the rock sounding music with strings in the background is both heart pumping and haunting at the same time. But the issue itself doesn’t lie within the music, but rather, in the game itself. I was playing through the first couple of levels, just jiving to the music. I finished a level and I left it on a completion screen for a few minutes to make a note to myself about the game. Within a minute I noticed that the music started stuttering and jumping. It sounded something akin to a CD skipping. I thought that maybe it was just on the screens in between gameplay, so I continued on. The next level started and it sounded fine for about 20 seconds and then the same issues with the music started happening while the level was ongoing. I held out hope that the issues would go away by the end of the level, but they did not. Unfortunately, I had to turn the music all of the way down because I had to continue playing the fun game. It was a pretty decent concession to make, luckily though, there’s ways to have custom soundtracks on the XBOX One, so you could technically have your own ominous soundtrack playing over this game. Me personally, I got to hear the game’s sound effects better so I was okay with it overall. It’s worth noting that I was on 1.0.3 version of the game. I don’t know if earlier versions had this problem or if future releases will fix this problem.

I think the visuals of this game are exactly what they need to be on a title that spans both home consoles and portable consoles such as the Nintendo Switch. Something like this has just the right amount of neon lighting effects to make it appear nice and science fictiony. It also has those darker colors and dim street lights that were all too prevalent in the past during the era in which the game takes place. So between the HD graphics that are at a distance, neon lighting, coupled with old timey aesthetics. What more could their be to talk about in terms of visuals?

I think that there is a lot more that could be touched upon, if I’m being honest. I see a lot of reviews talk about resolution and draw distances and other technical stuff that doesn’t really give the creativity of the visuals much credit. Let me explain what I mean by that. If you look at the .GIF file below this section, you’ll see Nikola Tesla in a mech (War Pidgeon). After a few shots and a few moves, you’ll see that the mech explodes as it does in game (more about that in the section below). But what you probably don’t notice is the sheer number of bad guys on the screen at once with no frames lost. What’s even less obvious is the fact that when the mech explodes and takes out bad guys, there’s more that happens. The bad guys’ body parts fly up into the air about 15 feet or so. And then the mech itself explodes with such force that its parts fly up towards the camera! I mean come on! These people who crafted this game absolutely put so much work into the small details and even though they happen so incredibly fast, the details are still there. And that’s just one example in this game, the list literally goes on and on. I guess the point that I’m making overall is that you have to play Tesla vs Lovecraft to really see everything visually that they accomplish.

The storyline in Tesla vs Lovecraft is a cute one. Tesla invents wireless electricity, scifi writer Lovecraft warns him of the implications. Lovecraft gets arrested for charging at Tesla and the rest is told slowly throughout the gameplay. I thought it was a great way to bring the two of them together in the most likely way possible. As you’re playing the game, you’re wondering if H.P. Lovecraft sent the monsters after Tesla or if maybe Lovecraft was just right when he warned Lovecraft of his meddlings in science. I won’t spoil any thing for you but the story definitely is fun and smart.

As you play the game it slowly and gently teaches you the core mechanics of the game as you play. By the end of the 3rd round you should have a full understanding of the game. I love games that do this as I hate stopping to have a screen pop up and interrupt my gameplay. I find that it kills the vibe and it makes me feel stupid. Games that just continue teaching you while you’re in your flow with zero interruptions are the best games. After you learn the ins and outs, you’ll also find how the rounds go. You spawn with a weapon, baddies appear, you take them out earning powerups and perks until the end. At the end you have to destroy a Cthulu shrine whilst holding off enemies. Once you destroy the shrine, you pick up any new drops that happen. It’s just that simple of a formula.

The enemies in this game are imaginative and are all named differently for their different types. There are achievements if you play the XBOX One or PlayStation 4 versions of the game that revolve around killing numbers of these bad guys. There are also a ton of weapons that only get better as time goes on. Furthermore, the better the weapons get, the better the powerups get. Ranging from healing to shields to time slow downs, this game has a lot of little drops. You do have to pick them up before they disappear as they’re only on the screen for a certain amount of time.

The game also features a leveling system in each round. When you reach level 3, you’ll have the option to press a button to bring up a perks screen. You get to choose between 2 perks. The perk is applied to the rest of the round that you’re playing and goes away at the end. But you can stack perks, this helps you get further and further along in the game. Sometimes it takes playing a round more than once in hopes that you get different perk options or maybe you just have to choose a different combination of perks.

Now we can talk about the mech in Tesla vs Lovecraft. The game requires that you finish a certain amount of rounds first to collect the primary pieces in each round. After you’ve collected all of the pieces you have effectively unlocked War Pidgeon, the mech. You start every round with War Pidgeon until it self destructs. And it does self destruct, but you have about 10 seconds. However, that’s not the end of the mech for the round. As an added element to each round, you can find the 6 pieces of the exploded mech scattered around the level. This is optional of course, but you may as well do it because that this is very over powered and makes you feel like a Terminator.

Tesla vs Lovecraft is a game that doesn’t give you everything up front and thank Cthulu for that. The game has 3 separate iterations of the game map for you to shift to. That means that the game could just be one map, but it’s 3 maps long! So there is plenty of single player gameplay to have to get through first. Along the way you unlock in game assets as well as more modes to extend the length of your gameplay experience. I love that it isn’t all unlocked by default as it makes it feel more like a PS2/XBOX/Gamecube game!

So besides the single player mode, you’ll find that you can unlock both a couch co-op mode and a survival mode. I can’t speak to if there is a couch co-op survival mode, but boy that would be stupendous. All of this game just seems to evoke a feel of games from the early 2000’s. But I digress. If you can make it through all 3 versions of the game’s map, all of the 3 maps in couch co-op, then Survival should be a nice desert for you. I think this game is just the right length to make you love it, but it certainly doesn’t ever overstay it’s welcome (sorry for the cliche).

The PS4 version can be purchased by clicking here.

Need the Nintendo Switch version of the game? Click here.