Today we have a fun little treat, it’s something that you don’t ever see often, multicarts! If you’re unfamiliar with what a multicart is, we’ll get that out of the way right quick. It doesn’t actually mean that there are more than one cartridges involved. It really should be called multigames. Because what they really are is more than one game on one disc or cartridge. This is great because it saves cartridge swapping and lets you enjoy more than one game at your leisure. So today we have four different ones from retro-bit that we’re going to look at. So enough talking, let’s jump into these multicarts already! 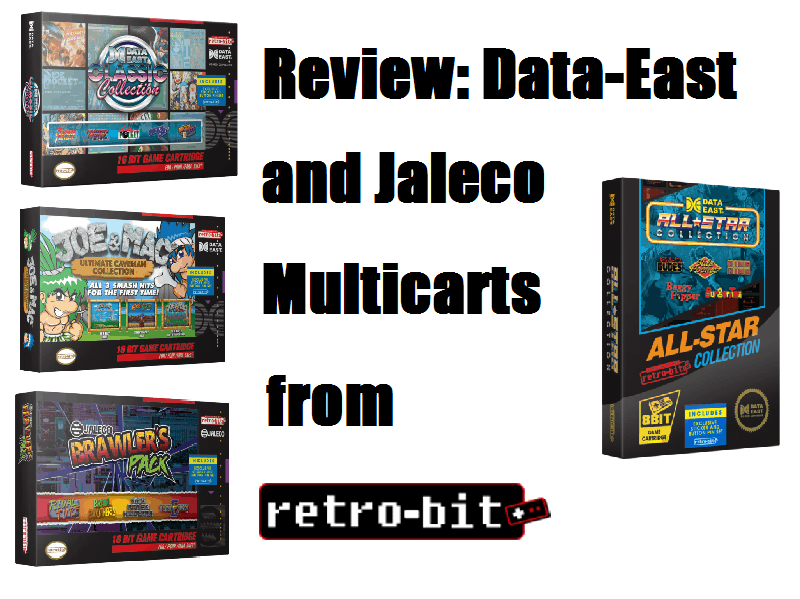 Here are all four descriptions available for these multicarts:

‘All 3 smash hits in 1 compilation for the first time! Includes all 3 Super Nintendo® / Super Famicom Joe & Mac games – Joe & Mac: Caveman Ninja, Congo’s Caper (Joe & Mac Sequel) and Joe & Mac 2: Lost in the Tropics. Joe & Mac will bring you back in time! Relive the adventure as you travel every nostalgic level and battle enemies along the path.’

‘Test your might with the new Jaleco Brawler’s Pack, featuring 4 side scrolling beat um ups on one cartridge. Published by Retro-Bit® and compatible with all original or 3rd party SNES® consoles. Are you up to the challenge?’

‘The Classic Collection from Data East brings you a brand new 5-in-1 cartridge for your original or 3rd party SNES® console. Published by Retro-Bit® with you in mind. Stop searching, sit back, and enjoy these classics on one cartridge.’

‘Enjoy some of the very best games from the Data East library with the All-Star Collection cartridge. Published by Retro-Bit® for your NES® consoles, this 5-in-1 cart compiles a must have list of retro classics.’

And how about a quick commercial for the products:

So the Data East Classic Collection is the first multicart that we’ll be talking about. The cartridge is for the Super Nintendo and seems to not only run on the normal Super Nintendo but also the Super Retro Trio Plus. Both were made by retro-bit so it makes sense that it’s compatible. The five games that are featured on this cart are listed just below the pictures as well as a quick description of the cart. On Castlemania games the cart clocks in at $35 which I think is fair, it means that each game is $7 each. That also saves you from having to swap out 5 separate games.

‘The Classic Collection from Data East brings you a brand new 5-in-1 cartridge for your original or 3rd party SNES® console. Published by Retro-Bit® with you in mind. Stop searching, sit back, and enjoy these classics on one cartridge.

Ah yes, my favorite multicart of all four multicarts! This one features the all too humorous Joe & Mac games as well as the middle chicld, Congo’s Caper. All three games are featured as a set on here. I know you might be thinking, “What about Joe & Mac Returns or Joe & Mac Caveman Ninjas”? Well, as right as you are, those are arcade exclusives. Additionally, I think that Joe & Mac Returns is mostly the same as Joe & Mac 2. And Joe & Mac Caveman Ninjas is almost the same as the first one on SNES. So all in all, I don’t think you’re missing out on gameplay there.

But as far as the multicart is concerned, the cost is at $35. Which to some of you may feel is a bit steep for three games, but I simply don’t agree here. The value is about $11.50 per game here and I feel that given how long and challenging these games felt to me, I would say that that’s a fair price. The games are fun and I instantly felt a sense of nostalgia over them and I never even played these games as a kid! They just take you back to a childhood state.

‘All 3 smash hits in 1 compilation for the first time! Includes all 3 Super Nintendo® / Super Famicom Joe & Mac games – Joe & Mac: Caveman Ninja, Congo’s Caper™ (Joe & Mac Sequel) and Joe & Mac 2: Lost in the Tropics. Joe & Mac will bring you back in time! Relive the adventure as you travel every nostalgic level and battle enemies along the path.

I believe that it’s pronounced “Jail-co”. And their games are games that I’ve never seen or played before. I had instant fun playing all of the titles on here, but Tuff E Nuff was the best. Nothing screams 90’s quite like it. I’m sure everyone will have their favorite out of this collection of four games, but Tuff E Nuff is perfect for me. I literally felt a big dumb smile on my face and wondered why I had never heard of this game before.  The rest of the game list is below, although none of them quite scratched my brawling itch like Tuff E Nuff.

This beat ’em up multicart is priced at the same cost of $35 which is even better here. There are four games for you to choose from and each have that great arcade feel. I feel like Tuff E Nuff alone is worth $35 here. Having the other three games is just like having add-on packs for a game that you already love and own.

‘Test your might with the new Jaleco Brawler’s Pack, featuring 4 side scrolling beat em ups on one cartridge. Published by Retro-Bit® and compatible with all original or 3rd party SNES® consoles. Are you up to the challenge?

The Data East All-Star Collection is another great combination of games. And it’s a full five games at that! The best part of all here is that the multicart is only $30 so at $6 per game, you really can’t go wrong here. Heck, even if you only like one game, you’re bound to find value in it. I went through the whole game and played games that I had played before and they brought back memories. I got to play games that I had never heard of before and create new memories. Multicarts like this just give you a reason to go back, dust off your NES/SNES, and get in touch with your inner crazed nostalgic. The game list is down below again, but my vote here is Buggy Popper. It was originally released everywhere except stateside as an arcade. It was known as Bump N Jump in the Pal/Europe regions and Burning Rubber in Japan. When they made it for the NES it was for Japan only as Buggy Popper. I’m glad the rest of the world now has a physical release of the NES version!

‘Enjoy some of the very best games from the Data East library with the All-Star Collection cartridge. Published by Retro-Bit® for your NES® Top Load consoles, this 5-in-1 cart compiles a must have list of retro classics.

The prices are definitely right for these multicarts. I think that when you divide the cost over the number of games on each multicart, you’ll see that it’s just cheaper in most cases. And even if you were to find a single game at your retro store for $6-$11, it’s just going to be one game, you’d have to find the rest and at the right price. Then you have a lot of cart swapping to do overall. These multicarts solve all of those issues. They also come complete in box with full-color manuals, stickers, and pins. Everything is perfect as far as the value and the print quality of the boxes are concerned. Even the build quality of the carts are strong, durable plastic and are easy to open phillips screws. However, these are not without their flaws of course.

I very much dislike cardboard boxes, I think that you can mimic old retro stuff all that you want, but cardboard should stay in the past. I would really have loved to have seen retro-bit join forces with BitBox and make beautiful plastic boxes that open like books. The only upshot of these being cardboard and being the true box size is that you can at least buy the plastic outer protective cases. That will keep these in pristine condition as one day they’ll no longer be made and will too be a part of history.

Another downside to the SNES multicarts is how slow their main menus are. You can see it in my gameplay recordings, they’re just absolutely slow. I don’t know if that’s a product of running on a clone system as opposed to the official hardware. I somehow doubt it though as the NES multicart’s main menu ran perfect quick and smooth. These things also have a hard time seating properly in the cartridge bays of the Super Retro Trio Plus, which seems odd. However, my guess is that they had to shape them to fit in the official slots first. And it may just be because even official games have a hard time sitting properly in the SR3+ as I mentioned in the review of that clone console.

But other than that, I can’t really find anything negative to say about these products. I would say though, if you’re someone who is against flashcarts, these are simply the next best thing. They achieve some of the same aspects without having to seem shady or involve dumping your own carts. This compilation of games is so good in terms of third party lineups. I hope to see even more multicarts like this from retro-bit in the future! 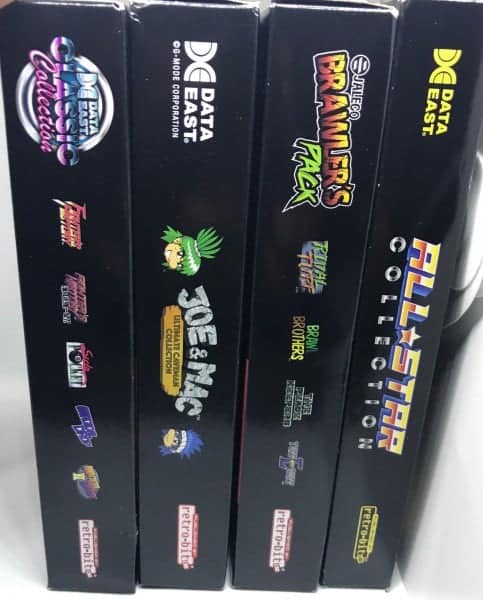 If you’d like to buy any of the mulitcarts, visit the Castlemania Games page for them by clicking here.

They’re also on Play Asia for a few bucks off with code INFORMER.