A few weeks ago a group on Twitter named yuzuemu announced that they were working on a Nintendo Switch emulator and they release some stuff but it’s a work-in-progress. Plus a lot of these guys well know of and come from the 3DS emulator Citra for the PC.

yuzu is a work-in-progress Nintendo Switch emulator. yuzu is an open-source project, licensed under the GPLv2 (or any later version). yuzu has been designed with portability in mind, with builds available for Windows, Linux, and macOS. The project was started in spring of 2017 by bunnei, one of the original authors of the popular Citra 3DS emulator, to experiment with and research the Nintendo Switch. Due to the similarities between Switch and 3DS, yuzu was developed as a fork of Citra. This means that it uses the same project architecture, and both emulators benefit from shared improvements. During the early months of development, work was done in private, and progress was slow. However, as Switch reverse-engineering and homebrew development became popular, work on yuzu began to take off as well.

In January of 2018, the yuzu team was formed out of several Citra developers, and the decision was made to release the project publicly. As an emulator, yuzu is in its infancy and is only currently used for Switch reverse-engineering and homebrew development. 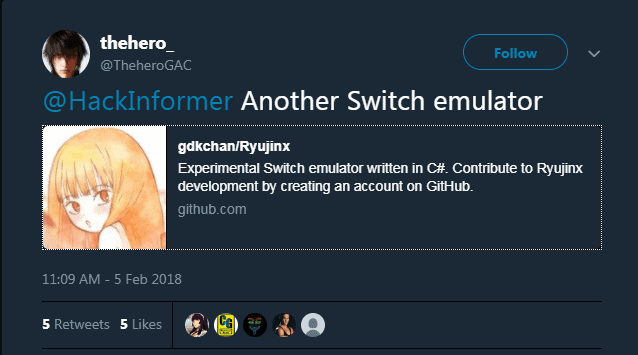 Next, we have another Switch Emulator that was released on GitHub by gdkchan/Ryujinx, thanks for the tip TheheroGAC.

Don’t expect much from this. Some homebrew apps works and Tetris shows the intro logos (sometimes) but that’s about it for now. Contributions are always welcome.

To run this emulator, you need the .NET Core 2.0 (or higher) SDK. Run dotnet run -c Release -- game.nro inside the Ryujinx solution folder.”

Now both of these releases are a work in progress and right now are great for people that are trying to make homebrew or emulators run without having to break out their Nintendo switch every time or just want to experiment and research the Nintendo Switch.

With all the stuff that’s popping up for the Nintendo Switch, I can see that we might have something great to work within a year or two that may act like a full-blown system on a PC.