This tutorial is assuming that you already own a Raspiboy. Whether you already bought one and have yet to assemble it or maybe you purchased one after reading my review of it. If you haven’t read my review of it yet, I have the link for you right here. This tutorial tells you everything in terms of assembling the hardware. If you need to know how to make a Raspberry Pi run Retropie, the internet can help you with that, it’s well documented.

Making Certain You Have Everything

It’s always a good idea to make certain that the seller has packed in all of the parts that you are supposed to receive. That keeps you from going crazy and thinking you lost something further down the road. There’s not much else to add to this other than the fact that this is a good practice before ever assembling anything that contains a lot of parts. Just below this paragraph is a picture of all of the items that you should have in your box from 8B Craft. Not depicted below is also the small zip lock bag of screws and controller buttons.

What Hardware You Need

Aside from having almost everything that you need already in the kit, there are some other essentials that you’re going to need here. The first of which being a smaller Phillips screwdriver. I’m not certain of the exact size, but as long as it’s smaller than your standard household screwdriver, you’re good to go.

The biggest piece of the pie here, is, well, the Raspberry Pi. The kits, unfortunately, do not have a Raspberry Pi in them. I do wish that there was a slightly pricier version of the kit with a Raspberry Pi in it, but alas, there is not. So what does this mean for you, the end user? If you’re purchasing this kit online, I would highly recommend that you buy your Raspberry Pi right after ordering your Raspiboy. The Raspiboy is likely to arrive much later than the Raspberry Pi, so this means you’ll already have your Pi when the kit arrives. The specific model of Raspberry Pi that you need is the Raspberry Pi Zero. It is the only one that will fit into this device. Nothing else. It doesn’t seem to matter which revision you get of the Raspberry Pi Zero, but obviously the more recent the revision, the better the emulator performance you’ll get.

If you’re sitting there thinking that you already have the Raspiboy and you were coming into this tutorial thinking that that’s all you needed and do not have a Raspberry Pi Zero yet, I’ll have a link at the bottom of this page for you to purchase one. I would still read all of this tutorial though, even if you’re missing the Pi, as it’s useful to know it all through first. Then when you actually go to assemble it, you can glaze over this again and have a sense that you feel like you know what you’re doing.

Additionally, you may need one last thing. If you do not have a way to read SD cards on your computer, you will need one. The microSD card comes with an SD card adapter, but if you do not have an SD card slot on your computer, you will need to get a USB card reader for your computer. Other than that though, you should be good. If you have your small Phillips screwdriver, Raspberry Pi Zero, and all of your kit’s pieces are present? Then you can safely move onto the next section.

What Software You Need

All of the software I’m about to talk about will be explained in the instructions at the bottom. For now, I’m just letting you know what to download before we get into the instructions. To start things off, you will need the most up to date version of the emulator software for the Raspberry Pi Zero. The emulator we’ll be using is an all in one solution called Retropie. You can download the newest version of that here.

You will then need to download Win32DiskImager. I would host a link to it, but since it’s possible that a newer, better version could come available, I will just suggest to you that you simply Google it. It is completely free and is for Windows. There is an alternative software for Mac called Etcher. I will not be able to tell you how to use the Mac version as I no longer have a Mac, but I would assume that the steps will be very similar in nature.

Those three downloads are the only parts that you will need for getting Retropie up and running on your soon to be assembled Raspiboy. You can now head onto the full instructions below. 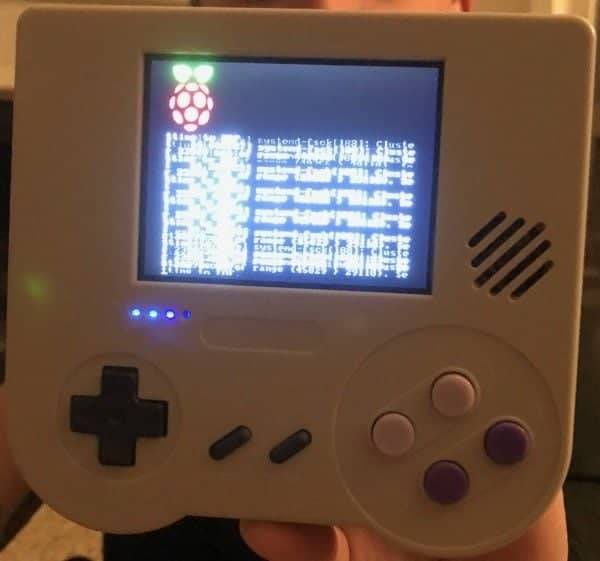 It is so well documented already on how to add ROMS to your Retropie. This device has two full fledged USB ports, so you can use the tutorial here and load up ROMS! If you have an issue with the font size in Retropie you can do something about that by clicking here. If you have a white noise issue, do the following. While Retropie, press start, select audio settings, increase to 100% then you can reduce the volume wheel, thus reducing the overall white noise. If you still want a full fledged video, here is the official one for you. If you’d like to know how to add the third USB port, here is the official video from that.

To turn ON the Raspiboy use the switch on the back. To turn OFF the Raspiboy, first shutdown from within the software, then when LCD goes crazy, use the switch on the back. If you have a 1.1 Raspiboy, it should not be used while charging. You’ll know you have it because it will power off if you try to use it while it’s charging. Also when plugging/unplugging power cable into a turned ON Raspiboy it might crash the unit. So only do this when the unit is off. To switch to HDMI you need to turn OFF the Raspiboy, plug the HDMI cable, turn ON the unit. Same if you want to switch back to composite. The micro-USB connector is for CHARGING ONLY. You should not try to connect a device there or try to connect SSH through that connector it will fry the PCB!

If you already have the kit and need a Raspberry Pi Zero, click here.