King Oddball (10Tons. Ltd, $4.99) is back again, this time, he’s coming to your Switch! I’ve been waiting for this physics based game to come to a portable console (I don’t really play iOS or tablet-based games) for a long while now. It has definitely spanned across so many platforms in the past few years. So how is this game now that you can play it both docked or on the go? I’m definitely going to find out for you, scroll down, please!

So what’s the description here and features come in this game; you might wonder.

‘King Oddball is a physics-based puzzle game with single button gameplay. The titular King Oddball swings a rock by his remarkably lengthy tongue in a pendulum like back and forth motion. The player releases the rock by pressing a button, with the goal of crushing all enemies on the screen. Key puzzle elements of the game are to figure out how to hit more than one target with each rock, and in which order to take out targets.

I got a fresh trailer for you too.

The audio in this game is nothing that truly wowed me. You have the standard sounds of things getting squished or breaking down. All of these sounds are as they should be. I feel like maybe the developers were looking to just have the bare minimum sounds to really accent the music. The music comes to us from Jonathan Geer who has done tons of video game soundtracks (like Owlboy!). This soundtrack too does not disappoint. It’s so quirky, but yet, serious. I’m actually not quite certain how to explain the soundtrack here. I would probably state that it sounds so matter of fact. Like “this is the king, this is what he does.” something more akin to music you may have heard in Beetlejuice. Where it’s fun, but you don’t hear any whacky things like slide whistles or stupid things like that just to get a rise out of the player.

This music changes with the levels. I couldn’t figure out if it was randomized, since it won’t let you go back and play a level after it’s been beaten. Maybe they assign different songs to different scenarios. I just am a sucker for well composed puzzle game soundtracks. When you spend so much time trying to replay until you beat a level, the last thing that you want is a repetitive song playing. It just adds insult to injury. Kudos to 10Tons LTD. for getting Jonathan on this and double kudos to Jonathan for blowing me away! 10/10 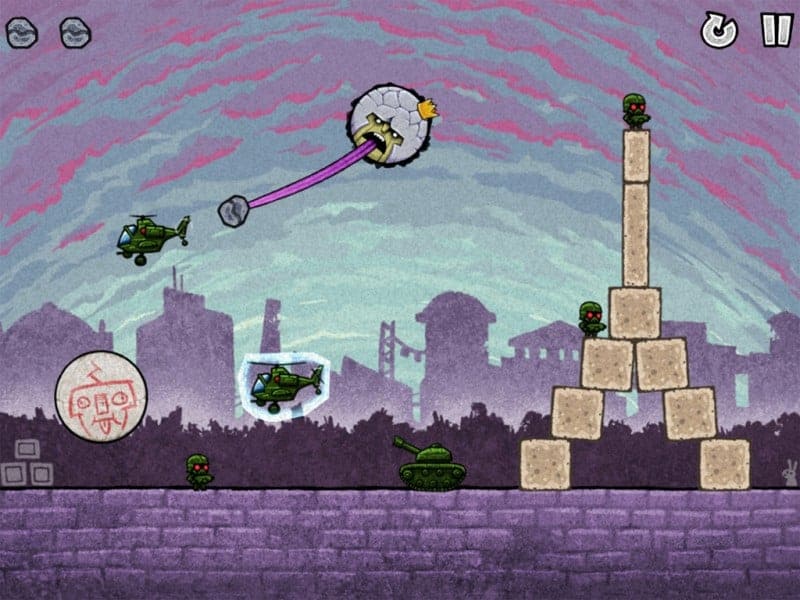 The visuals are admittedly pretty great. They don’t try to hide the fact that the whole thing is supposed to look like colored pencils and watercolors. I think that adds to its charm tremendously. I also have a fondness for games that don’t take themselves too seriously. On the flipside of this, I also think that if they had tried to make this a fully 3D game we’d have some issues. The first is that I don’t know if it’d actually run on the Switch. Secondly, you’d probably have a terrifying looking King up in the sky (like the moon from LoZ Ocarina of Time). Not to mention the deaths and destruction would look a lot more realistic and much darker. This game is great because it’s cartoonish look helps play up the humor factor. The art style says “It’s okay to laugh at a man with a gun get smooshed by a rock!”. Its flat 2D style would be the only thing that I would say isn’t a necessity, but I’m not saying it’s bad either. I think had they bumped it up to a 2.5D scenario we could still get the challenging, physics-based gameplay, not lose anything, and gain some depth. They did a stupendous job here and I hope to see them make a sequel just so I get some more cool art! 9/10 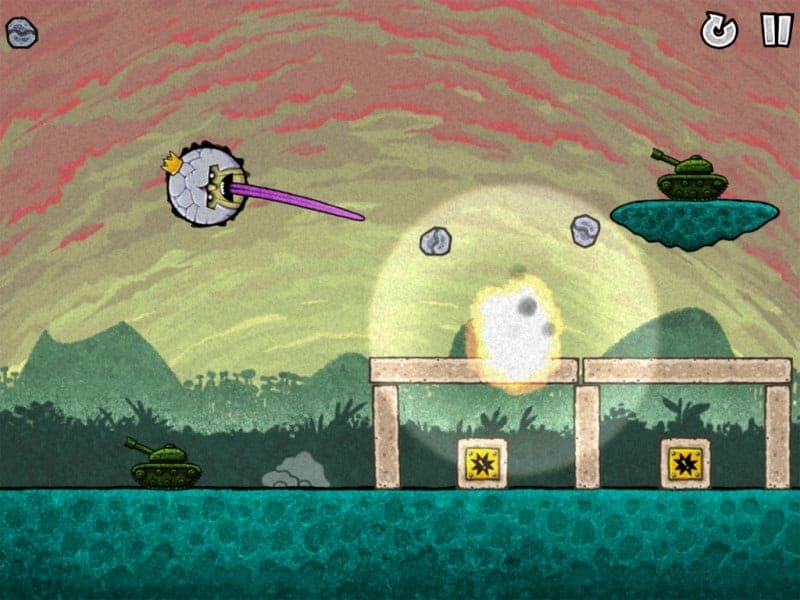 You may have noticed up in the features section that it said “Single button gameplay. How hard can it be?”. The answer is HARD. This game can be challenging, it can be easy, it can be ball busting, but sometimes, it can be downright impossible. I got this game to review around Halloween and so the game unlocked a hidden Halloween pack. That specific pack doesn’t know where you’re at in the game and so it’s difficulty is straight challenging. The problem I had is that I didn’t want to leave the Halloween stuff without beating it, but I knew that if I did, I wouldn’t be able to touch it again until next year! So I was very inexperienced and trying to beat the Halloween stuff. I got about halfway through it before I wanted to toss my Switch across the room.

But how is the rest of the game? The parts that are in order start you off nice and easy. They let you slide in smoothly to let you feel the way the physics and mechanics are. I feel like the game should’ve let you have some sort of warning that if you go into the Halloween section that the difficulty is equivalent to being 75% into the game. I probably wouldn’t have started the stuff and could’ve gotten to review the actual game sooner. The game is so fun and the core idea of the game is that you are a king trying to destroy the planet. How do you do that? You simply use your extendable tongue to grab from a cache of rocks, naturally. Then you rotate your head left to right and then right to left. This causes the rock to swing in a pendulum fashion and then you let go of the rocks when it’s ideal and try to hit the military folks.

Yes, it is very similar to other games in the genre. You might think of Angry Birds, Zuma, or Tennis in the Face and you’d be close. There’s something special about a guy that just wants to kill by throwing individual boulders at tanks and such. The way you unlock more of the map to progress through the world is simply by beating one level at a time. By unlocking more of the map you’ll also find little items along the way. You can’t go back and replay individual levels, but there wouldn’t be any reason to. I know I haven’t really discussed much about the actual gameplay. It’s just tremendously difficult to do so. As mad as it made me at first, I know it wasn’t a normal circumstance and I still recommend that you play this weird and whacky game. 8/10 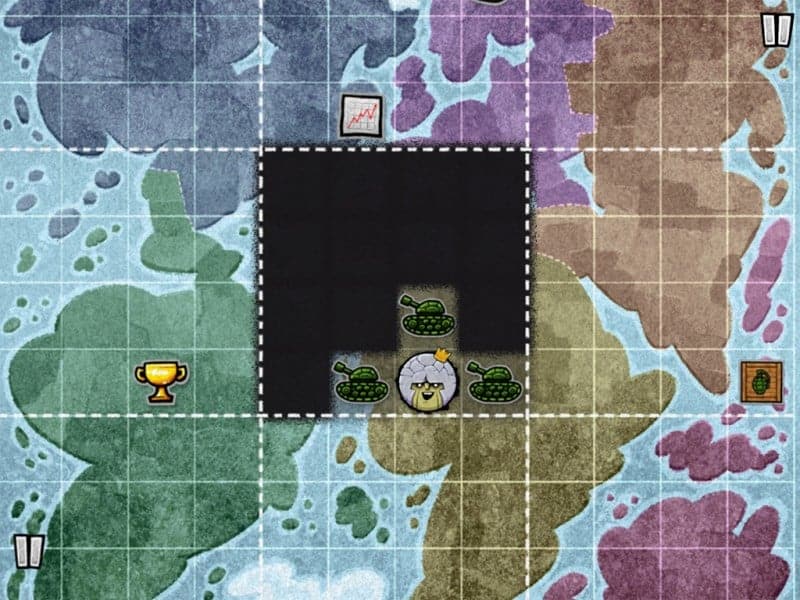 There are a lot of levels in this game. But once you beat the 160 levels and any holiday levels, you aren’t left with much. This game banks on being a lengthy and difficult foray into this genre. It does do it well, I’ll give them that. Outside of that though, there’s really nothing. In fact, the lack of replay-ability leaves me with not much else to talk about here. If you like the game, don’t rush yourself because once it’s over that appears to be it. I would like a leaderboard function at least! This would keep things hot and heavy with friends and others. I also really think that a game like this lends itself to having a custom level creator for the player. It doesn’t even need to be to share online, although that would be nice. I feel like there are a lot of things that the developers could’ve done to make a game like this have you come back to it. 4/10 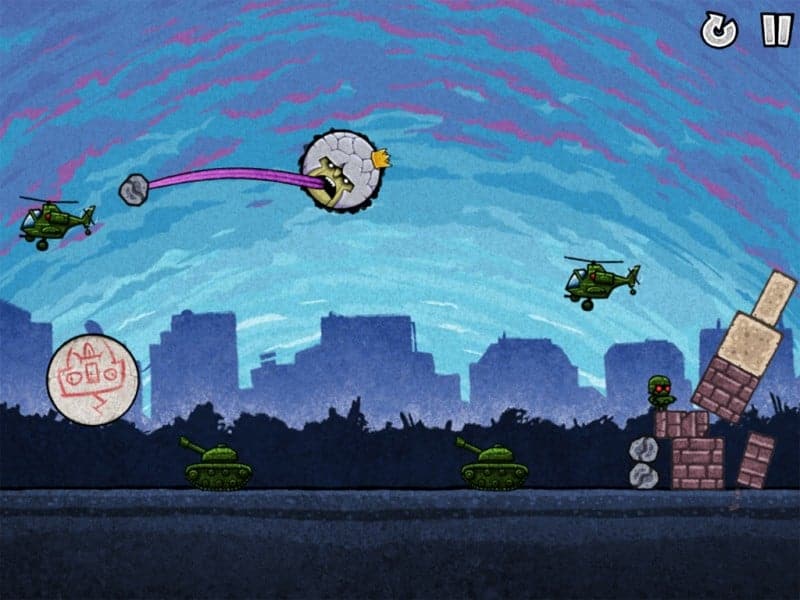